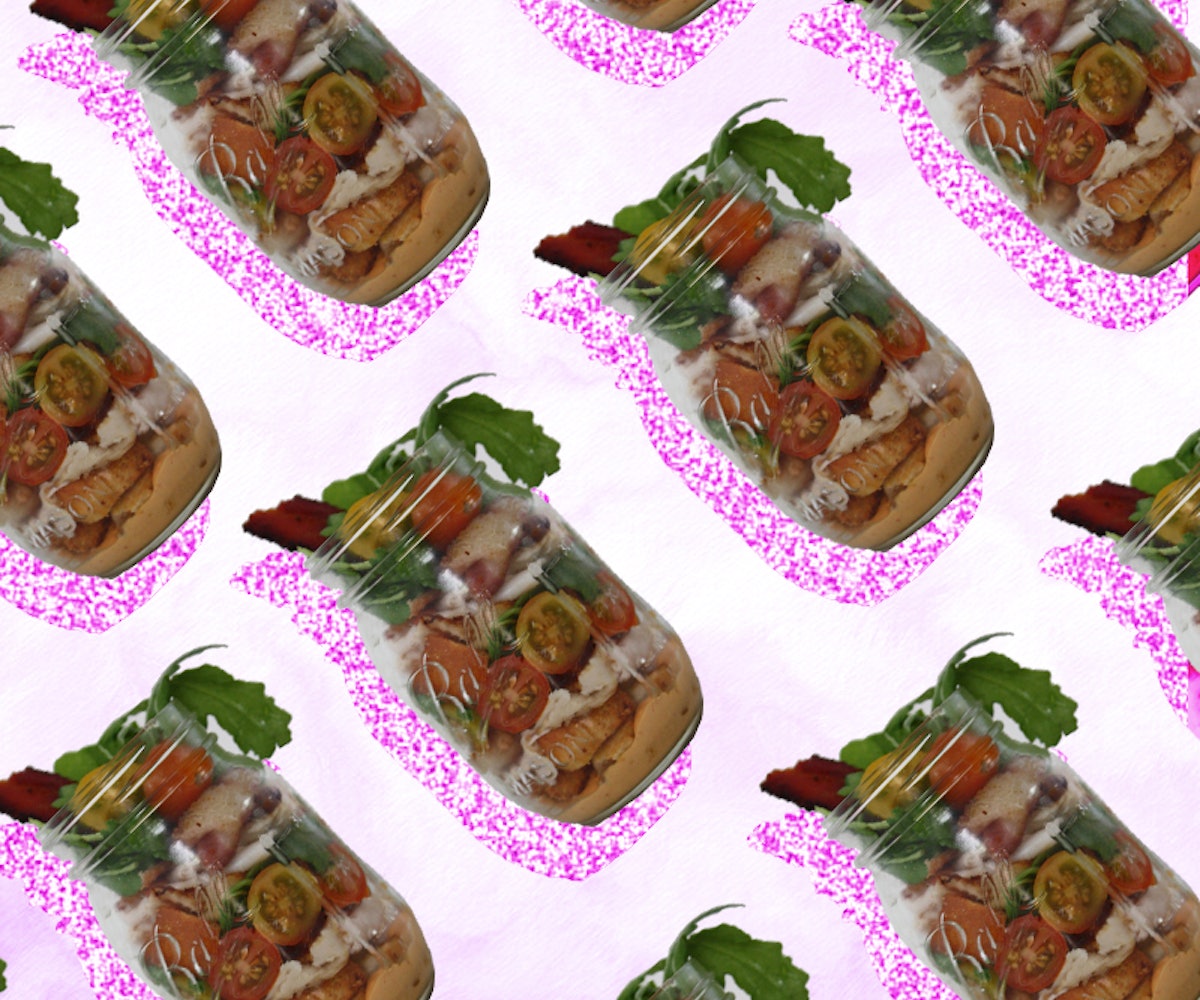 Remember lunch boxes? Toting around a Batman vs. Robin or Spice Girls box was our elementary version of donning a Stella McCartney or Chanel purse. These culinary cases were as much about the packaging as they were about packing the PB&J. And now, tucked into cubicles instead of cubbies, a new pack is making fashionable waves at our #DeskLunch.

Mason jars are more about the colorful contents inside than characters on the outside, showing your great taste—literally. This eco-friendly way to pack lunch also wins you good karma points for not contributing to the holes in the ozone, which never goes out of style. Another bonus of packing lunch in a jar? The glass container won’t take up much room in your work bag, but will open up great space in your wallet.

The below recipes call for what’s probably already stocked in your pantry or refrigerator’s crisper. And for what you’re missing, a quick grocery sweep will do the trick. It’ll be cheaper than five days of buying lunch from the corporate cafeteria or the surrounding takeout haunts.

You might not be able to fit a sandwich, apple, and cookie all in one container, but these salads will keep you just as stuffed as the jar itself.

Had one too many this weekend? Remedy the binge with a refreshing grain salad. A few bites in, and you’ll be feeling as fresh as the week ahead.

In a small saucepan, over high heat, bring the water and quinoa to a boil. Lower heat to a simmer and cover until cooked, about 10 to 12 minutes.

Friday is cool, but Tuesday is arguably the best day of the week. Because tacos. Instead of trailing out to wait in long lunch lines that rival your elementary school’s cafeteria on pizza day, pack your own taco salad.

For the Brown Rice

In a saucepan, bring the water and brown rice to a boil, over medium-high heat, about 4 to 6 minutes. Reduce heat to a simmer and cover until the brown rice is cooked, about 12 to 15 minutes.

In a medium mixing bowl, coat rice with lime juice, zest, salt, and cilantro. Toss and set aside.

For the chicken rub, combine the paprika, cayenne, salt, and pepper in a small bowl. Wash the chicken breasts and pat dry. Season chicken with the rub in a shallow bowl, making sure to cover both sides.

In a skillet over medium-high heat, heat the olive oil. Slowly lower the chicken with a spatula or tongs to avoid spitting oil once the chicken hits the pan. Cook through, 5 to 7 minutes per side. (Time of cooking chicken breast varies depending on the size. It should NOT be pink in the middle when cut through!) Slice into pieces and set aside.

In a 32-ounce jar, add the salsa, rice, tomato, chicken, cheese, and arugula. Add sour cream and guacamole if you’d like.

You’re a weekday warrior once you make it to Wednesday. Treat yourself to a carbo-load, even if you’re not preparing for a marathon. A work week is sort of like a marathon, though, right? Stock up on farfalle and get the energy you need to get to Friday.

In a saucepan, bring water to a boil. Add the farfalle and cook, 10 to 12 minutes. Drain and set aside.

Turn a club sandwich into a salad. This jar is easy to prepare and simple to assemble before breakfast. Heat up a fourth slice of bacon for breakfast while you’re at it.

In a skillet, over medium heat, add the bacon slices to the pan. Cook slowly, flipping once, until bacon is cooked, about 15 to 20 minutes. If you’re in a time crunch, place a paper towel on a microwave-safe plate. Add the 3 slices of bacon and cover with another piece of paper towel. Cook on high for 3 minutes, or until bacon is cooked. Let cool and set aside.

It’s a ROYGBIV world; we’re just living in it. You’ve gawked at the rainbow grilled cheese and maybe inhaled a rainbow bagel or two. You know what else can be multihued? Salad. Vegetables are naturally vibrant allowing pretty salads to be void of dyes.

For the Simple Dressing

½ red onion, cut into half moons

Pour the dressing into a mason jar, and top with the vegetables.

NEXT UP
Culture
In Cann’s Holiday Campaign, The Greatest Gift Is Being Chill
Culture
Not One, But Two BTS Documentaries Are Coming
Culture
A Britney Spears-Inspired Musical Is Coming To Broadway
Culture
An Exhaustive Breakdown Of The Balenciaga Controversy