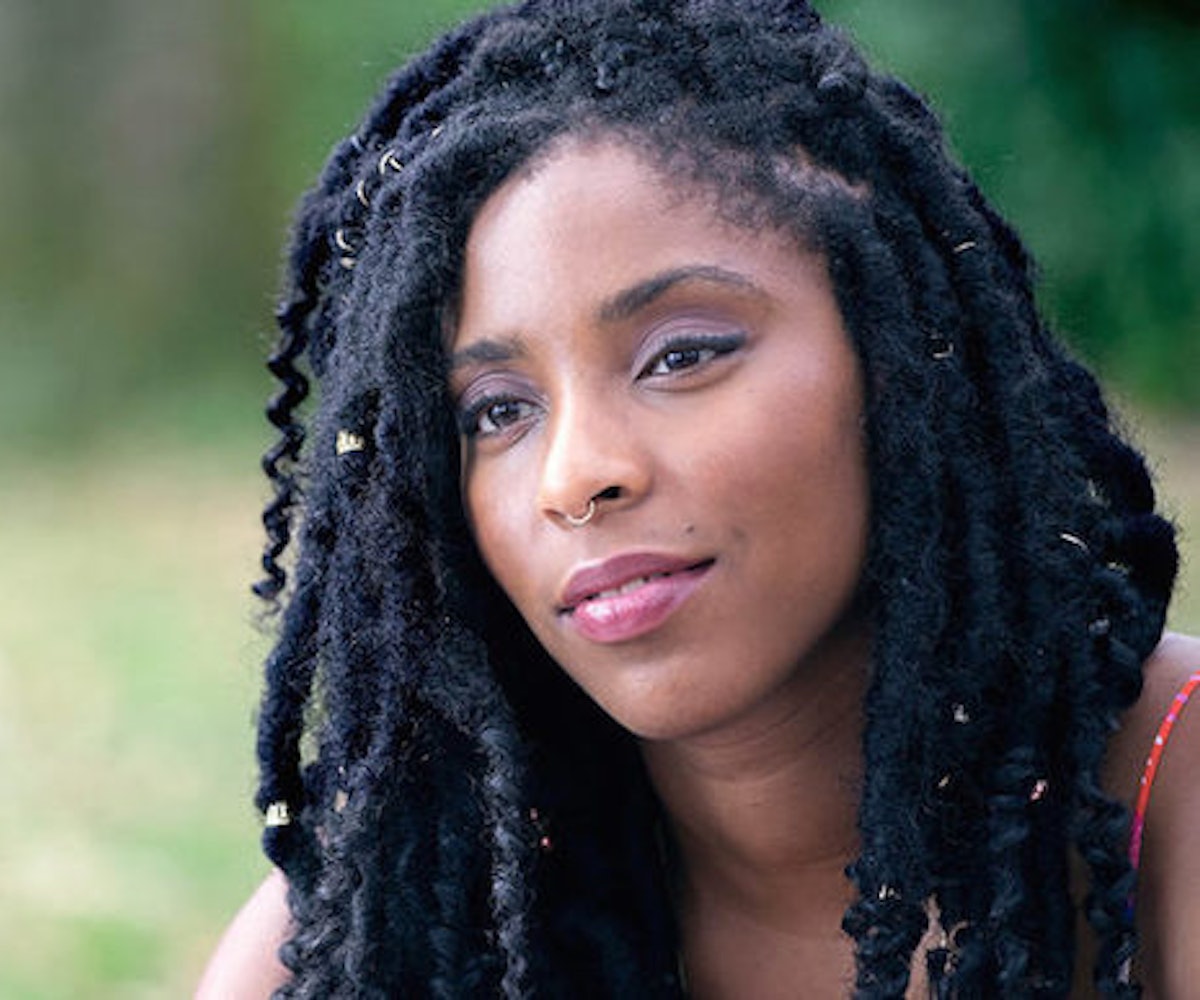 You don’t know Jessica Williams. But you probably think you do, because the 27-year-old Brooklyn, New York, native tends to play women that share her name. It could be an exasperated Daily Show correspondent dropping constant knowledge on white male America, or more recently, a playwright struggling both romantically and professionally in Netflix’s new film The Incredible Jessica James. But she wants to emphasize that these are characters. She’s really not the type to get up in your face. When she picks up the phone for an interview, she thanks you for taking the time to speak with her before you get the chance to thank her first. Williams has made a name for herself as someone who speaks in an unapologetic, even occasionally accusatory tone about matters of race and gender, but Williams exudes nothing but love when the cameras aren’t rolling—whether that’s for herself, her 2 Dope Queens podcast that she co-hosts with best friend Phoebe Robinson, or the cast of Girls Trip. Over the course of a candid chat, the incredible Jessica Williams dished on the aggravations of dating, slipping into the role of a producer, and saying more by saying nothing.

As someone who is also in their mid-20s and fed up with Tinder dating in Brooklyn, I felt very seen by your new movie. Any advice you could offer me that you picked up from this production process?

You just gotta appreciate being in it. If you have one goal in mind, that’s great, but—not to sound like too much of a hippie—it’s about the journey and not the destination. Whatever you’re going through right now is part of a process, so you honor that and pay attention to it. Be kinder to yourself. If you go on a bad date, hopefully, you have some really funny friends that you can have a cocktail with and talk shit. That’s the fun stuff, like, "Guess what?! He pulled a stuffed elephant out of his backpack and said it was his best friend! It was the worst date ever." You gotta laugh about it. That example’s not from my life, by the way!

When you’re playing a character that’s similar to yourself, do you ever have trouble with people conflating the two of you?

We didn’t change the character’s first name, so people are like, "How much of it is you?" There are similarities—we really wanted her to sound 25, somebody who was young and wanted to make it in Brooklyn, so that was me. But she’s a lot more forthright than I am, [she's] not afraid of confrontation.

In a way, it is, yeah. It felt good to do the scenes where she’s laying it out and letting people know what she thinks. I was like, "Yeah, that felt good," even though it was just acting. Because I’m a very conflict-avoidant person. I’d rather let things fester until they explode.

That’s surprising. A lot of your success has been based on a willingness to get real and speak truth to power.

There’s something to writing and performing and the pieces from The Daily Show that let me work outside myself, and then I can go home and still have the character straight, knowing I’m not the most confrontational person in the world. That has allowed me to still exist, even if it’s complicated. That separation’s a big part of my personality.

Meeting with so much success so early in your career, do you ever get intimidated by the whole age factor?

I did back when I started the show at 22, but it was the truth. There were people who were a lot older and wiser than I was, and there was a lot I could learn. I just sort of allowed myself to have some time to be intimidated, but also recognize that there was so much to get from people who have been doing this for a long time. I just stayed open.

You strike me as a self-assured person, someone who’s secure in their place in the world. Do you get anxious, or are you just good with interviews?

Oh, absolutely. There’s a way you’re perceived and how you really are. We’re always worried in one way or another about our careers, at least I know I am. I’m always trying to reassure. In this career, the rug can get pulled out from under you at any time. Things might work out, but there are more ways for them to not work out. I have to remind myself to still stay excited while keeping my feet on the ground and staying humble.

Was it at all difficult, selling a concept as small-scale and personal as The Incredible Jessica James to the parties that make movies happen?

We didn’t really have too much of a problem, actually. We did the movie People Places Things with the same production company, Beachside, and they were really excited to work with me and [director] Jim [Strouse] again. It really felt like we were in good hands.

You also stepped in as executive producer on this movie. What do the duties entail on a production like this, and how did you take to it?

Jim kept me involved since he got the idea and came up with this character and story. I was really excited to work with him, so we met a bunch of times and he talked to me, like, "Here’s where I see this going, here’s how this character is, what do you think?" I’d give him my opinion, and it was all fine. And then, before we shot the movie, they told me, "Oh yeah, you’re gonna be the executive producer," and I asked what the difference was, and they said, "You just give your opinions." I was like, "Awesome!" I was already doing that job. I was just excited about getting that title, it felt right.

A lot of people get into producing to help champion the voices of artists they like who are still under the radar. Am I right to assume that’s on your mind?

Definitely! My podcast 2 Dope Queens is just me and one of my best friends shooting the shit onstage and making sure we have stand-ups and storytellers and performers who are black or people of color or women or in the LGBTQ community. Because I feel like so often, we’re the supporting characters in other people’s narratives, so what we’re excited about with the podcast and movies going forward, is making them the stars in their own narratives.

The movie puts Jessica in interracial relationships, but never really comments on it as a polemic, instead just letting it be. Are you actively resisting the urge to put this movie in a larger social context?

I think it’s progressive to talk about race and have that as part of a story, but it can also be progressive to not have that as the focus, and just allow the character to exist. I want to play both types of roles, as many types as I can. There’s room for both. But what you bring up is why I was excited to do the movie. That’s how this is for me and my white friends, too—it’s not always a big deal in our group. I wanted to do a story that reflects that.

As for your live recordings of 2 Dope Queens. Do you have a favorite memory from the history of the show?

Oh man, there are so many. We recently had the cast of Girls Trip on the show, minus Tiffany Haddish, who’s amazing. But we had Queen Latifah, Regina Hall, and Jada Pinkett Smith. They were so much fun.