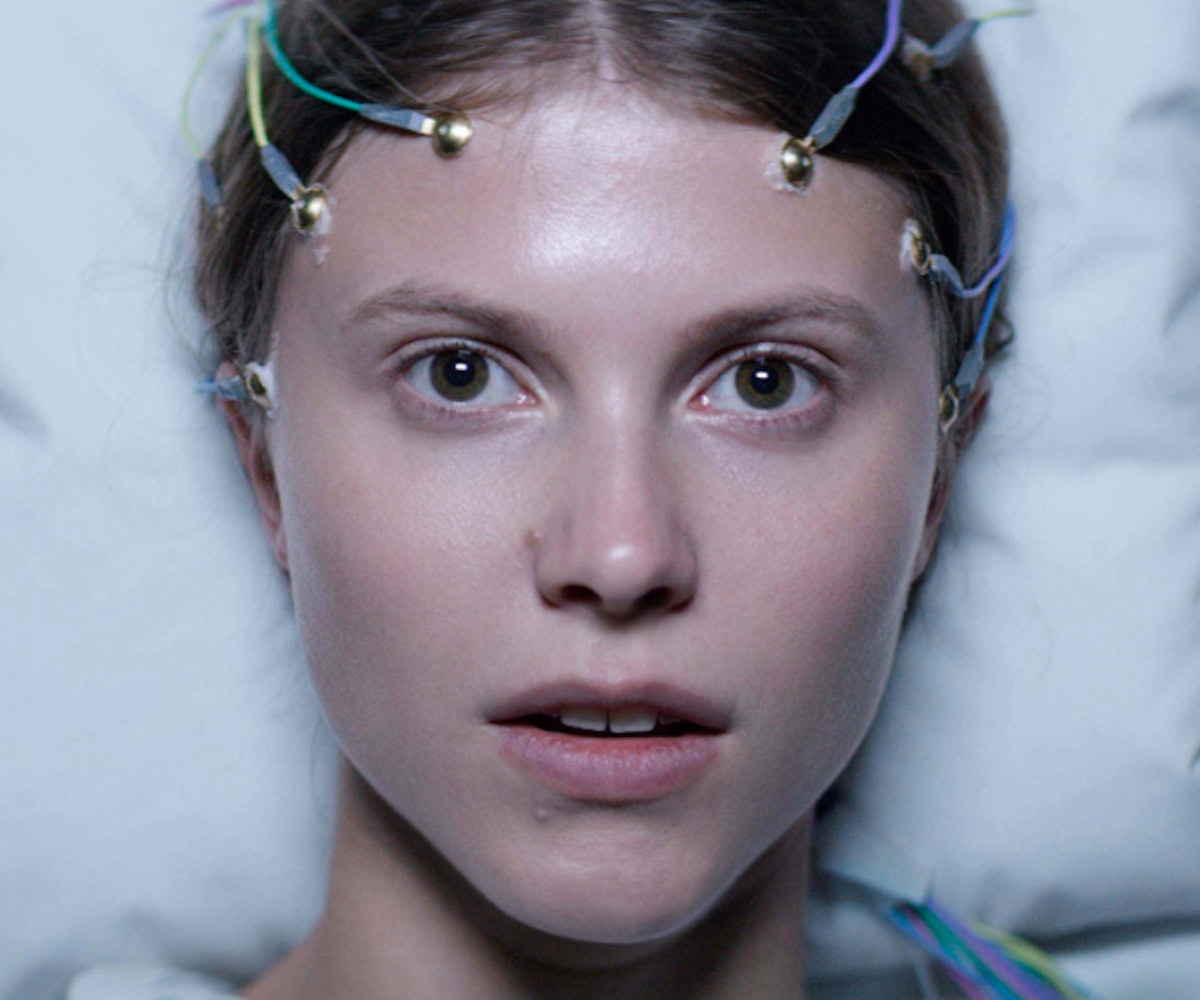 The most unsettling moments I've spent in a movie theater this year were when I watched the opening scene of Joachim Trier's new film Thelma. It doesn't seem, at first, like there would be anything particularly unnerving about them. The film opens on a blindingly white expanse of remote Norwegian countryside. A father and his young daughter are setting off into the woods together, traversing a frozen lake, beneath which fish can be seen darting to and fro. The two are headed off together to hunt. They stand together in silence, tracking a deer in the distance. The girl watches the deer, connecting to its big-eyed gaze. The father tracks the deer with his rifle. I braced myself for the gun's sharp retort, the loss of the girl's innocence.

But the father swings his rifle around, aiming it, for a moment, at his own daughter's head. He doesn't shoot. The deer runs away. I realize it's not the girl whose innocence is gone. It's all of ours.

Thelma has mostly been described as a psychological horror movie, one centering around a lesbian romance and telekinesis; a modern Scandinavian Carrie, in a way. That this film is the work of acclaimed director Joachim Trier (Reprise, Oslo: August 31) is surprising at first, given his other films don't have anything resembling horror or supernatural elements. And yet, Thelma is more of a commentary on the rise of religious extremism, the stifling nature of the patriarchy, and the enormous power young women wield than it is about gore. (Though, there is one pretty incredible scene with a snake. And who doesn't love snakes?)

Thelma, then, is a particularly apt film for right now, as it delineates the different ways the powers that be work to oppress all that they are afraid of, all that they can't control. It is a film of liberation and exploration, and I was really excited to get the chance to talk with Trier recently, about the dangers of extremism, soft power, and how the road to hell is paved with good intentions. Read his thoughts in the interview, below.

Thelma feels like a departure, in terms of genre, for you. Instead of something that’s very realistic, naturalistic, it has supernatural elements. What about that appealed to you?

It felt liberating to allow ourselves to go deeper into, what I call, mental images. I’ve explored that in the past with what I think you’re rightly describing as more naturalist drama. I think the idea of doing a film about the deeper passions and erotic and moral complications of a deeper acceptance in a human being, and letting that turn into a sort of a nightmare-ish mood-driven piece of filmmaking was something we aspired to do. In the world right now, where a lot of stories are being told with superheroes, supernatural, and horror, we wanted to try to do something that had a human nuance and had more of a psychological layered-ness hopefully, and something that, at the same time, was relatable and scary.

A part of that was also showing that kind of Scandinavian idyllic nature experience, but then almost making it slightly more perverse. Like the opening of the film is about the most iconic thing [from] a Norwegian childhood, a trip into the snowy woods with your parents, but having a sinister twist to that scene. And kind of exploring almost cliche images but giving them a different perspective.

The opening scene stunned me. It set the tone so beautifully.

Yeah, there’s something else there—we were also engaging in the child’s gaze of a curiosity about the world being a magical place, that we all think when we’re kids. Like little Thelma, as a six-year-old, is looking through, standing on, water that’s frozen, that’s transparent ice—like this phenomenon happens once in awhile where you’re actually standing and you can look straight down and you can see the fish coming closer. It’s setting up the idea that Thelma has an affinity with nature, and she draws animals to her, which becomes a part of the story later. But, at the same time, it’s also just about how a child, before culture kind of ruins your perspective on everything, has this more pure gaze on the world, and I thought it was the right way into the story. Because it’s also asking questions about the mysteries of ourselves and the world, and I wanted the film to have that sense of wonder as we come into it.

Don’t we all have an element of that in our lives? The idea that, at some point growing up, we’ve got to ask ourselves, what are the premises for that relationship to our parents? How much can we change from that perception they gave us of the world? How do we become autonomous? And how do we accept in ourselves a respect and love for ourselves if we feel that we are different from our parents in some way? I think that I wanted to make a film for young people as well, about feeling a bit like a freak and not belonging or not knowing how to love yourself.

The father is kind of a stand-in for a perpetuator of this very strict type of Christianity. Watching Thelma, you realize what the limitations are of this awful, controlling institution; there’s no mockery of religion, there's almost a defense even of how we think about the mysteries of nature. I thought that was a really interesting approach because, even though Thelma's father is this controlling and ultimately horrifying character in her life, there’s also an acknowledgment of how he's trying to protect her, even if it's wrong...

I agree very much. I think that’s what I think we were keen to explore. On one hand, I’m not religious but I’m very very curious, and I guess what I’m skeptical to—and you can feel that from the film—is of religion, or when religion creates oppressive power structures around people that don’t let them be free enough to explore what they deserve to be free enough to explore. And I think that’s a big deal in the world right now. Religious Conservatism is on the rise, at least in Norway and I think in America, too, from what I read…

So I think we need to discuss these things, and I’m obviously rooting for Thelma’s love for another girl, and I want her to feel that that’s completely beautiful and acceptable, obviously for me, and I know that’s not like that for everyone. But, at the same time, we never have the scene where the father is yelling at Thelma, saying like, “You cannot be a lesbian!” Because I think, from the research I’ve done and having spoken to a lot of people that come from that kind of background into being gay, it’s the internalization and the self-acceptance that becomes the struggle as well. It’s not only your parents. And that could be a metaphor for many things in life, not only being gay but, like, how do we accept ourselves and how do we accept our will? So that’s one thing, and then how to create not just a monster out of the father, but a human being, because if not, I would get bored easily. So, what’s creating him? So, it’s that that soft power I think I would call it, that what do you say in English... the road to hell is paved with good intentions? I think that’s at the core of many tragic stories.