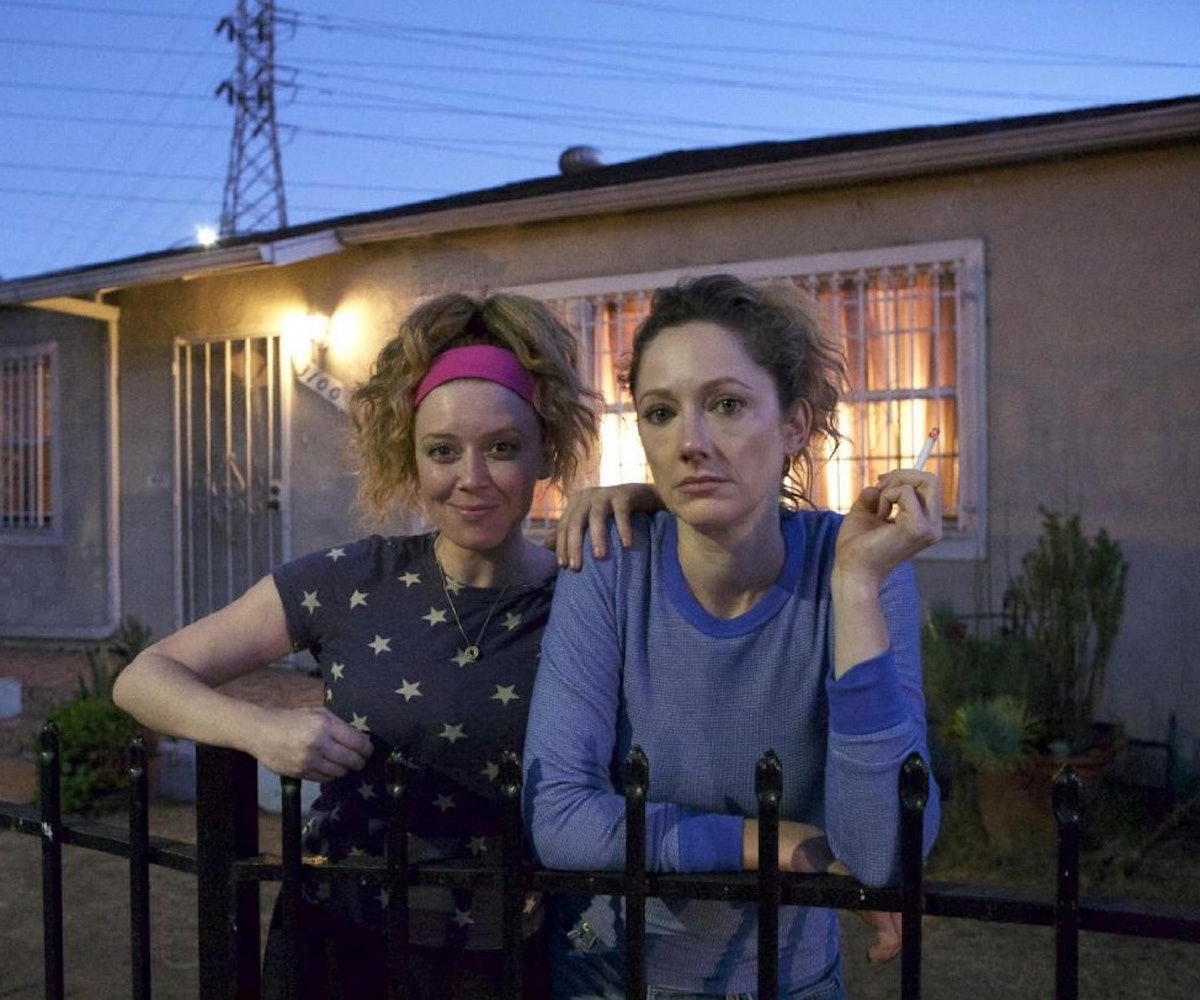 Whenever Judy Greer and Natasha Lyonne appear on screen, you know you’re in for a treat. Although drastically different from each other, they share an instantaneous allure that’s made them two of our favorite actresses of the last twenty years. Since entering into the spotlight in the mid-'90s, the two dynamite stars have, respectively, been appearing just about everywhere—from cult favorites like But I’m a Cheerleader and Jawbreaker to Woody Allen musicals and hit TV shows like Arrested Development and Orange is the New Black. So when director Jamie Babbit decided to cast them as sisters in her new dark comedy, Addicted to Fresno, something special was bound to happen. And although Greer has become known for her light and spacey roles, and Lyonne for her bold and brassy demeanor, here Babbit has cast the two against type, resulting in dynamic performances that highlight both their comedic and dramatic chops.

Playing co-dependent sisters Shannon (Greer) and Martha (Lyonne), Addicted to Fresno explores the dangers of their relationship and the cycles they can’t seem to break. As the optimistic and responsible one in the family, Martha owns a home, exercises regularly, and works as a dutiful hotel maid in Fresno, CA. Shannon, on the other hand, is just out of rehab for sex addiction and continues to put herself (and those around her) in constant danger. And when Martha gets her a job as a maid, Shannon quickly spoils her luck by accidentally killing a hotel guest while trying to cover up a bout of meaningless sex. Seeing no other choice, Martha swoops in to help Shannon as they embark on a series of schemes to conceal the crime. Rounding out the movie with everyone from Aubrey Plaza to Molly Shannon, the story comes to life through the fantastic chemistry of its cast.

With Addicted to Fresno now out on VOD and in theaters, we sat down with Judy and Natasha to talk about everything from the confusion of their sex lives to the bad habits we’re destined to never break.

Having grown up on movies like But I’m a Cheerleader and Jawbreaker, I always associated you two with a specific moment in my own coming of age and assumed you were friends—but what was your relationship actually like before making this movie?

Judy Greer: We were fans of each other but...

Natasha Lyonne: I’ve always been a fan of Judy Greer—who in their right mind is not? She’s one of the greats of our time. My best friend Chloe once came back from working with Judy and couldn’t stop talking about how incredible working with her was and how she’s her favorite actress she’s ever worked with. Chloe and I have worked together many times and she never said this about me. But in my head, all I’m thinking is: oh yeah, Judy Greer, that excellent actress who’s funnier and better at acting than me who also fucked my ex-boyfriend after we broke up.

JG: It’s not like he was cheating on her—but we didn’t.

NL: So in my head, Judy Greer, since like 2002, was his girlfriend after me. She was also this little redheaded number, who it would have made sense, like, oh I bet you’re happier now, pal.

So how did you find out they actually didn’t sleep together?

NL: I asked point blank, like any tough guy would. What’s going to be the situation here, do I have to break your knees or you want to get through the picture? It was a real Whatever Happened to Baby Jane moment between us.

NL: I was probably being polite.

JG: We never even smooched!

NL: It really confused the hell out of me; I had to wrap my head around an entire new history, and one that could include getting to love Judy Greer the way I actually do based on her work. My passion for Judy Greer felt like this isolated thing that I was never allowed to claim as my own. I have a lot of young readers, and they should all watch the film Rashomon. In the Kurosawa movie, it’s a classic, of course there’s my version of reality, your version of the reality, and the truth—and the truth is often not what any of us perceive it is based on our own experience, but it’s actually a stand-alone and separate event entirely.

Can you talk about being cast against type and if that’s something that rarely gets offered to you in Hollywood? Was that what attracted you to working on this movie?

JG: Well I had just finished working with Jamie on the first season of Married, so she saw me on set and had directed me. For her to want to then put me in a movie that was very close to her heart—because she had worked on it for a couple years with her wife and it was their first project together—that felt hugely flattering. At this point in my life I’m very people-oriented, so one of the biggest factors was the script itself and the chance to get to play something so against type—any actor jumps on that. If young filmmakers want to get great actors in their movies they should offer roles to people against their type because it makes a big difference and we never get a chance to really do that. So that’s one reason why independent film is really appealing to actors at all levels of their career and in Hollywood, because you do get the opportunity to do something different. Also, I’ve just been a fan of Natasha forever, she is so charismatic and this ball of energy; you really have to be on your toes all the time.

JG: Aw, shut up. Anyway, this movie was so different from what I was used to reading and I cared so much about these characters. I find myself having a lot of compassion for people that keep making the same mistake over and over again because I came from that, Natasha’s come from that, and we all have.

What you two do with these characters that’s great is make us want to root for them, even when they do keep fucking up. Could you relate to that in your own lives?

NL: For most of us we really can’t fight against our basic nature and destiny. Speaking of my own experience, there are a million ways to be self-destructive, even if it means just staying up until 2am when I know I have to be up at 6am. There are subtle ways that you can take yourself for a ride that are instincts in you that are hard to beat.

JG: It’s so fucking hard to change. Of course there are some things that are harder than others, but I don’t think most evolved people are unaware of their bad habits. If you’re smart, you’re like, yeah, I know I do this, I do it every fucking time.

NL: It’s a great way of looking at the movie because, at the deeper core of what makes it interesting, is that it’s about a town you can’t get out of and the darkness of not being able to escape this element of being a person born into your own circumstances. Trying to have a good attitude despite it or making a nice life for yourself despite your own circumstances is a very universal theme that really grounds the movie.

JG: Like what of your bad habits are destiny and what are learned? I don’t know, but you can definitely try to change what you’ve learned.

Coming off big studio movies like Ant Man and Jurassic Park or tightly-scripted shows like Orange Is the New Black, was it a relief to get to play around with your characters and have more freedom on set?

NL: It’s really fun because everybody wants to feel like they’re doing an honest day’s work for an honest day’s pay, so it’s great when you’re getting to use every ounce of yourself, every reserve of imagination in real time, plus you’ve said all the lines as written and you really feel like you’ve done it. That’s a very fun, satisfying feeling, especially when you have a director like Jamie who you knows what to do with you.

JG: When you’re doing most shows or any movies where they don’t have time for rehearsals or money to rehearse, a lot of these improvised moments are a form of rehearsal. I’m always flattered when they’re used, but it’s nice just to get into a moment, into a mood, into a scene, do the scripted way, improv, figure stuff out, and even if you go back to literally word for word from the script, it does have a fresher element to it.