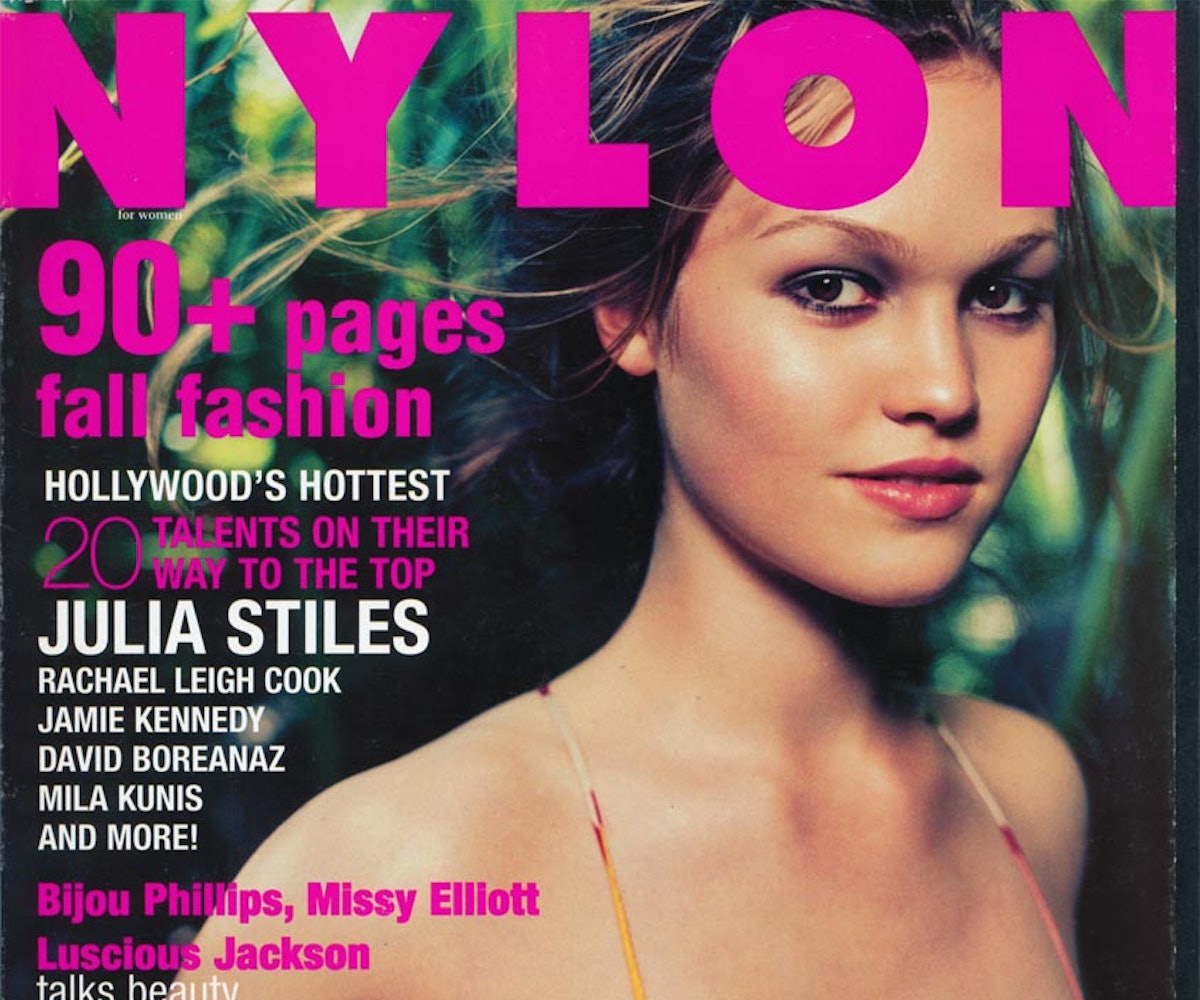 We're still waiting for the

10 Things I Hate About You

but while that's happening, we've found the perfect thing to make the time go faster: by checking out Julia Stlies' October 1999 cover story! Our eternal girl crush talks Shakespeare, style, and debates the age-old question: to pee or not to pee? Read on.

To say Julia Stiles is down-to-earth is something of an understatement. She has just introduced herself to me like this: Hi, I'm Julia. I need to pee."

It's as if we're attending a meeting of Urinators Anonymous. Like Lauren Bacall or Diane Keaton, Julia Stiles has a smart, no-nonsense beauty. Perhaps to counteract this, she wears primary colors, an acid green backpack and hot pink slip dress with a picture of the Virgin Mary on the front. Later, at a Soho boutique, she will make a beeline for a pair of yellow wells, despite New York's 90 degree heat.

The first place she needs to pee is at The Mercer Hotel -- ulta-minimalist and hip, its patrons skeletally suave. We are both afraid of the waiters, of the decor, and of the food, which, from the entree to dessert, looks like it has been created by Helmut Lang. When we request not just vegetarian but vegan, out waitress says, "No" in a way that actually conveys, "No...and now I must kill you." The maitre d', sensing some trouble, comes over to check if we are enjoying ourselves. He is hugely jovial, leaning in to place a hand on Julia's shoulder. She recoils, as if licked by a snake. Julia Stiles, all of 18, considers herself a cynical New Yorker through and through.

"Yep. I took on the role of Ophelia in Hamlet because she's so naive, loving and innocent," Stiles explains. "I thought it would be a good move for me to play someone so different from my personality."

Stiles came to national attention in the acclaimed mini-series, The ''60s, but it's her recent position as a Shakespearean pin-up girl that has captured the media's imagination.

"With Shakespeare, actors usually speak loud or fast or slow or with an English accent. In the beginning of Hamlet I was really intimidated by the language and then I realized you don’t have to do a different kind of acting when you do Shakespeare. I decided not to worry about iambic pentameter, but speak as if it's real language, which it is."

First she played Kat in Ten Things I Hate About You, a teen re-working of Taming of the Shrew. This year she not only stars as Ophelia, but also as Desdemona in O, another Shakespeare re-working, this time of Othello.

"That appealed to me," she says, "because I had been thinking so much about the race issue."

Stiles thinks deeply, feels deeply, breathes deeply (appalled at the notion of attending a gym, she is nevertheless addicted to Pilates).

"I go to modern dance, too. What I've realized is forget about being skinny or waiflike, I like having a strong body that is fit and is able to dance for two hours and not get tired. I look at women who are anorexic and feel like it’s weak, a weakness of your own personality."

At 16 she wrote a screenplay called The Anarchist's Daughter through a Sundance screenwriter's workshop. She is not quite sure what to do with it. According to Stiles, a film like Good Will Hunting could never have happened if it had been two disillusioned actresses, rather than actors, who had themselves written the screenplay.

"It would have been perceived as ungrateful and too aggressive. For a start, Hollywood is really only interested in telling male stories."

Hollywood has some fucked up women's issues, that we know. It must be especially difficult, though, confronting those warped expectations when you are still a teenager.

"Right. You already have your own issues, and then you have to come in every morning, sit in front of the mirror for an hour, and have the makeup girl say, "How did you get that zit?" and "You have terrible bags under your eyes.”

She picks angrily at her rather sad looking salad (unable to eat dairy, she frequently ends up with a plate of rabbit food at fancy restaurants).

‘I've talked to a lot of actresses who’'e had producers tell them that they need to go on diets. Then there's the regular competition amongst the actresses. It's amongst girls anyway. But if you go out to eat with another girl, you think she's just eating salad so I'm eating salad."

She scoops up the last of her salad and promises, through a full mouth, "I will have dessert, even if it has dairy in it. I have a point to prove here."

We agree that the beauty myth is a form of procrastination so that women don't use their time to do more important things.

"You'll be sitting in a classroom and all the girls are looking at their compact mirrors making sure they look pretty and all the boys are studying and getting smarter. It's a form of oppression and it makes me furious."

She has a brother and a sister, six and eight, same parents ("they just waited"). She loves playing with them because they are so imaginative, uncorrupted, "untainted, yet, by all that crap."

Her mother is a potter and her father sells her work. Her mother was a '60s radical, but hasn't time for it anymore, passing the baton on to Julia --who is furiously pro-choice. She tells me, fearfully, how easy it would be for the Roe v. Wade ruling to be overturned and that she is nervous that the next president will be a Republican, "probably George Bush Jr., God help us."

She is considerably more confident talking politics than shopping for clothes. In Steven Alan, a sales girl peeks her head around the dressing room curtain and asks Stiles if she can help.

"Nope, I'm fine!" she practically screams, as if caught in an illegal act. With the shame of a champagne socialist, she gingerly concedes that the dress looks really good and decides, after much deliberation, to buy it. For many years, Julia stopped wearing dresses entirely, after a man made a jerk-off gesture at her when she was 11. “I was scared I somehow provoked it.”

She looks through the racks at Betsey Johnson, but the clothes are too bright, even for her. "Besides, I don't think I would enjoy wearing something that expensive." Her parents manage her money. She fears if she did her own taxes, that would be the first step into grownupville. Julia still lives with them, although her boyfriend sometimes stays when they are away. She says "my boyfriend" hesitantly, not wanting to sound like one of those girls who talks about their boyfriend.

"I met him filming Ten Things I Hate About You. Everyone thinks it's Heath [Ledger], but it's not."

Sweating profusely, we pass a movie theater where Besieged is playing, starring Thandie Newton. "Oh, I love her." She also adored Reese Witherspoon in Election, because she dared to look unattractive. Other actresses speak highly of Stiles. Natalie Portman and Minnie Driver have both told me how much they love Stiles's work. Nobody is jealous of her. She is the anti-starlet. Everyone wishes her well, as if they were doing it on every actress’ behalf.

Stiles is actually friendly with few actresses, except Gaby Hoffman. "She's truly comfortable with her own beauty. She wouldn't dream of conforming to a Hollywood type." One senses Stiles has had more of a struggle, perhaps because she is closer to a Hollywood type-- willowy thin, long blond hair, button nose, full mouth. She thinks she looks too midwestern.

"But, whatever." She seems embarrassed whenever she catches herself talking about her looks, her career. Stiles is one of the few actresses around who is more interested in the world at large than the insular microcosm of her own career. She's very pleasant to be around, just highly strung enough to be interesting without being "actress-y."

Next up, she stars in the romantic comedy, Down to You, alongside Freddie Prinze Jr.

"I'd say it's similar to Annie Hall. Really quirky, with two people looking back on their first love. The first part is about how they fall in love with each other. The second half is about them growing distant, falling out of love, not understanding why."

The last place Julia Stiles goes pee is at The Angelika cinema. "Restrooms for Customers Only" intones a large sign on the door, and Stiles takes it to heart. She pretends we are looking for someone.

“Oh” she says slowly, in halting Eric Cartman fashion, "They are not here. I will use the bathroom while we wait for our friends...who are coming."

We see a man in knickers. "He's just gotta..."She screws up her nose, searching for the right direction to give the poor fellow. For the very first time today, Julia Stiles, her dress flashing pink and her eyes flashing intelligence, is lost for words. I leave her on Broadway, thinking, thinking, thinking, as New York swarms by.