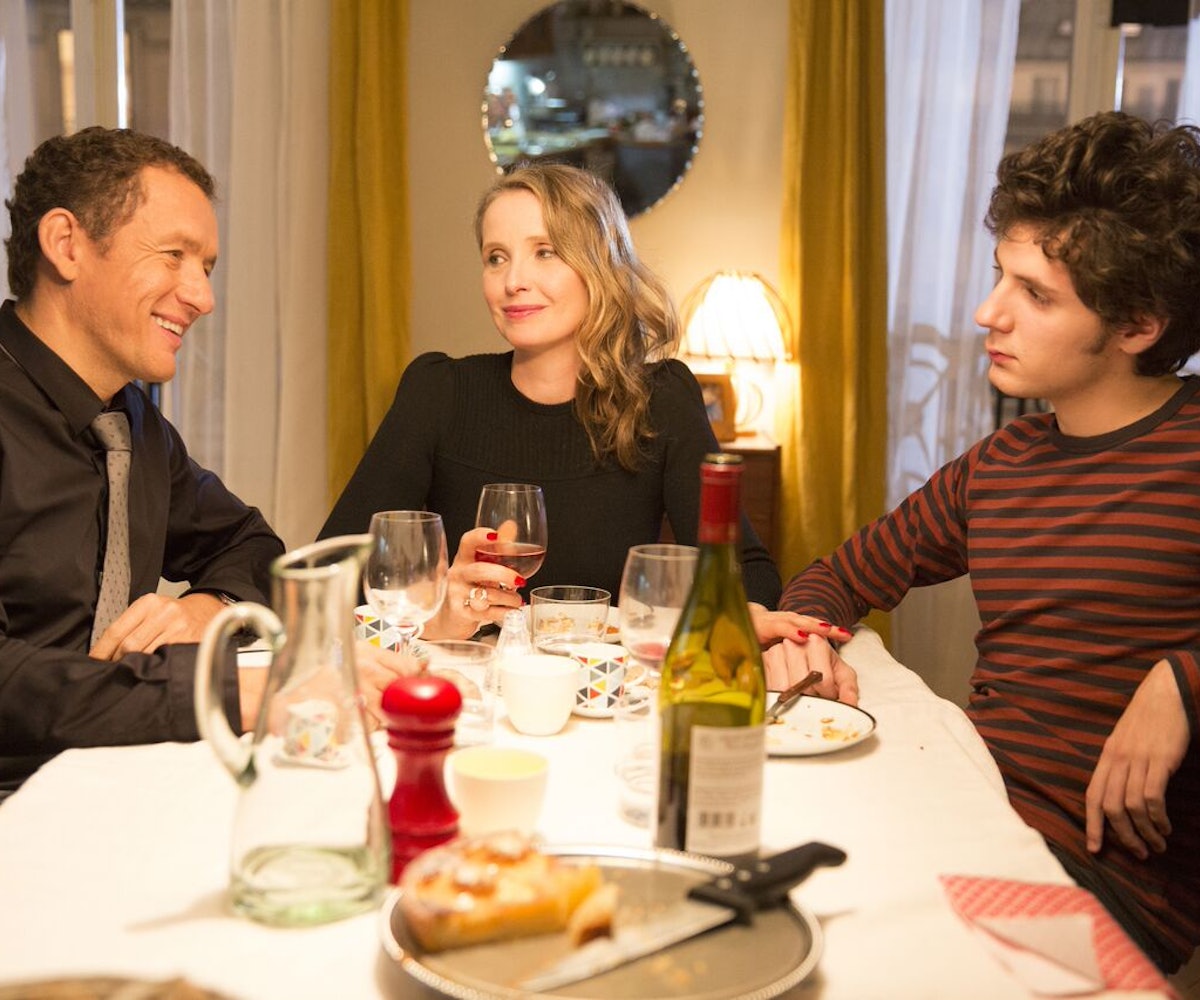 Anyone who has seen Julie Delpy in Richard Linklater's Before series and in 2 Days in Paris (and its New York-based sequel) knows what a triple threat she is as a writer, director, and actor. Her most recent effort, Lolo, in which she does all three, is a French-language comedy that focuses on the complexity of finding love later in life—but with a much darker cinematic epicenter than what we've seen from the French native in the past.

Delpy plays a 40-something Parisian with a successful career in the fashion industry who, while on vacation in Biarritz, meets and falls in love with an endearingly naive and provincial IT specialist, Jean-Rene, who has a hopelessly bad fashion sense (which wouldn't be a big deal if Violette wasn't one to rubs elbows with the likes of Karl Lagerfeld, who makes a cameo in the film). When the holiday romance resumes in the city, a clash between Violette's new boyfriend and her 19-year-old sociopath son, Lolo, ensues with farcical schemes including an itching-powder incident, drug-spiked champagne, and even a career-damaging computer hack on the part of Violette's insidious offspring.

Delpy's neurotic Violette steals the spotlight—not entirely surprising coming from the actress who won our hearts with the charmingly opinionated and inappropriately hilarious characters of Celine and Marion in Before series and 2 Days, respectively. Violette is a woman of many contradictions: She is independent and successful in her professional life, yet needy in her romantic life, as seen when she leaves Jean-Rene a novel-length string of insecure text messages. She is romantic, in a traditional way, but also undeniably modern: spewing feminist remarks, allowing her son to smoke weed in the house, and engaging in outwardly sexual banter with her best friend Ariane. (In one standout scene, the two get into details about Jean-Rene going down on Violette while she's on her period, as a female train passenger looks on at them in horror.) Violette is a woman struggling to keep everything together as she balances her career with raising her self-centered artist son, who she consider the “future of humanity," and a blossoming relationship. And as such, her neurotic and hypochondriac sides ring incredibly authentic—charming the audience and bringing out laughs throughout the film.

A trace of that neuroticism is spotted in Delpy herself, when during our interview, she stops in the middle of a response because she thinks there is an earthquake happening in her home in L.A: “I kind of felt an earthquake. Did I imagine it?" “Yeah, I totally imagined it," she concludes before I even have a chance to comment. (There wasn't an earthquake.) Like her character, she too has a son, seven-year-old Leo (who she says is nothing like Lolo and is “the sweetest little thing"). She also considers herself a feminist, and doesn't care should her sexual dialogue offend the audience.

As with Delpy's other comedies, which often seem to provide running commentary on life, it would appear that Violette is a pretty accurate depiction of the modern-day woman doing it all. Yet when I ask Delpy whether her character is a representation of what it's like to be a woman in today's world, she denies making such claims: “I am not trying to make statements, like, “Okay, I am showing you a woman in her 40s, and women in their 40s are like that.' That would be so presumptuous of me."

With Lolo out in theatres now, we caught up with Delpy. Read the full interview, after the jump, where she talks about motherhood, how women handle sociopaths better than men, and why there will definitely be no sequel to Lolo.

Even though there were children in your past movies, this is the first one where the son plays such prominent figure and is really engaged in the romantic relationship of the main characters. What inspired you to explore motherhood and the parental relationship?

I was inspired by the idea of describing a woman in her 40s who has a grown-up son and their dynamic. She’s a single mom, of 20 years, who’s juggling motherhood and tremendous amounts of work. She’s in the fashion world, which never stops; every season is a new madness where people don’t have a minute to themselves. There is a lot of guilt if you are a mother and don’t spend enough time with your child. I wanted to explore the possibility of this mother who basically raised her son by herself, and who made mistakes without knowing she made mistakes.

I am sure many single parents are familiar with this concept.

As a parent, you always have so much guilt, and you always question everything you do. “Am I doing the right thing? Should I work? Should I not work?” Most people don’t have a choice and have to work, so how does it affect the child? There are so many questions that come along when you have a child, I find. I am sure most people don’t question as much as me but I am always questioning what’s right and what’s wrong. How do you raise a child in a way that they are going to grow to be a functional, happy, balanced human being? And at the same time, an interesting one, because you don’t want to raise your children in a way that’s bland and boring either.

Yeah. He is not a boring one; he becomes this evil creature. It’s not at all autobiographical—I have the sweetest little bunny at home. But, like, how does that happen? I’ve had this happen to friends of mine, that give everything to their children, and they turn out to be not very kind to their parents. I was a bit inspired by a movie from the ‘50s called The Bad Seed where the little girl was completely evil. There’s always something very troubling for people when it’s your own flesh and blood. You can handle a sociopath when it’s your boss or your husband, but what do you do when it’s your own kid? That must be your worst nightmare! What do you do when you’re dealing with a sociopath in your own home?

That’s scary! Has your parenting changed since making this movie then? Any more boundaries set?

I never had this issue because, I think, Lolo was born that way, in some ways. That’s what the whole thing with Bad Seed was. The poor parents didn’t do anything wrong. She [Violette] fed it by being kind. Sometimes when you have guilt at not being there all the time, when you are there, you have a tendency to let them do whatever they want and be overly submissive. Certain kind of limits, to what kids are allowed and not allowed to do, are important and good for children. But I am not trying to make some big statement about parenting by making the film. I was just making it entertaining.

This movie gets dark with Lolo proving to be a legitimate sociopath. How did you find that balance between comedy and the darkness?

I gave myself a little bit of space when I was shooting. Weirdly enough, when I was editing, I realized I had to sometimes make it go to a place that was a little too far and play with the music to do certain things to not make the character of Lolo too scary.

Do you think Lolo is scary?

Even though some people find him scary, I personally still think it’s a comedy. Some people are so annoyed by him they want to kill him. Often men, more than women, are really disturbed by his behavior. Women can handle sociopaths a little better probably because they are used to it, sadly, I am afraid. Women, probably, had to deal with more abuse in their life than men, so men have a harder time with that kind of personality. Women have no problem with Lolo. I think, every woman, more or less, had a boyfriend that was kind of a bit like Lolo: very destructive, manipulative kind of thing. People tend to think that women are manipulative, but I think men can be way more manipulative than women, from my experience. But I am not a manipulative woman so I probably just stumble into manipulative men sometimes.

Despite being manipulative, Lolo is charming to watch.

I had fun with it. I needed to have these little moments. And the fun part, for me, was to have this character be very laid-back. I think that’s what makes the character really fun to watch. He is very relaxed about being destructive. He is not conflicted, he is not neurotic; he is the opposite of neurotic.

Violette is very interesting and contradictory herself. How did you come up with her character?

I liked the conflicting personality and wanted to show that. She’s got her shit together in her job—she’s very strong and she knows what she wants, and she’s completely in control but then in her personal life, she’s kind of a mess, and I thought that was an interesting contrast. You can be an emotional mess, yet be able to completely function in your workplace. I think that’s what makes her interesting to me. I think the mistake would be to make a character that’s one-dimensional. Like, “she’s tough at work, therefore, she’s tough in real life and in her personal life.” It doesn’t work like that; nothing is black and white. It doesn’t mean that if you have your shit together in your personal life that you have your shit together in your professional life or with your kids or with your friends. It’s never perfect. Unless you are a complete control freak and have absolutely no emotions for others and no flaws, which I don’t know who’s like that. Actually, Lolo seems like someone with no flaws because he is destructive and controlling, and sometimes these people can pass as someone with no flaws. But in the end, he loses.

The thing I loved most in Lolo was the sexual and candid exchange between Violette and Ariane. Why was it important for you to include that kind of dialogue right from the start?

I had a lot of fun with that. That came to me very easily. I know that it could offend some people because it’s so crude and so direct, but, to me, it was very important. Women in their 40s, they don’t really give a shit anymore. To me, it was important for them not to just be crude, but to be very silly as well. They are not just talking about sex in a crude way but they’re really having fun with it. It’s funny and completely nuts.

Can you talk about the ending of Lolo where you leave us with a bit of a cliff-hanger?

The film is constructed a little bit like a thriller/horror film, even though it’s a comedy. There’s this famous shot at the end of Carrie, with the hand coming out of the grave. It’s kind of like that idea in Lolo: You think it’s over yet it’s starting again.

You have a bit of an affinity for continuations of stories, with the Before trilogy and sequel to 2 Days in Paris. Will there be a continuation for Violette, Jene-Rene, and Lolo?

No, we are not going to do a sequel. I have to stop making sequels because it drives me insane. I have a hard time giving up on characters. It’s really weird. I kind of feel for them in a way, and that’s why I keep on writing sequels—I get attached to my characters.