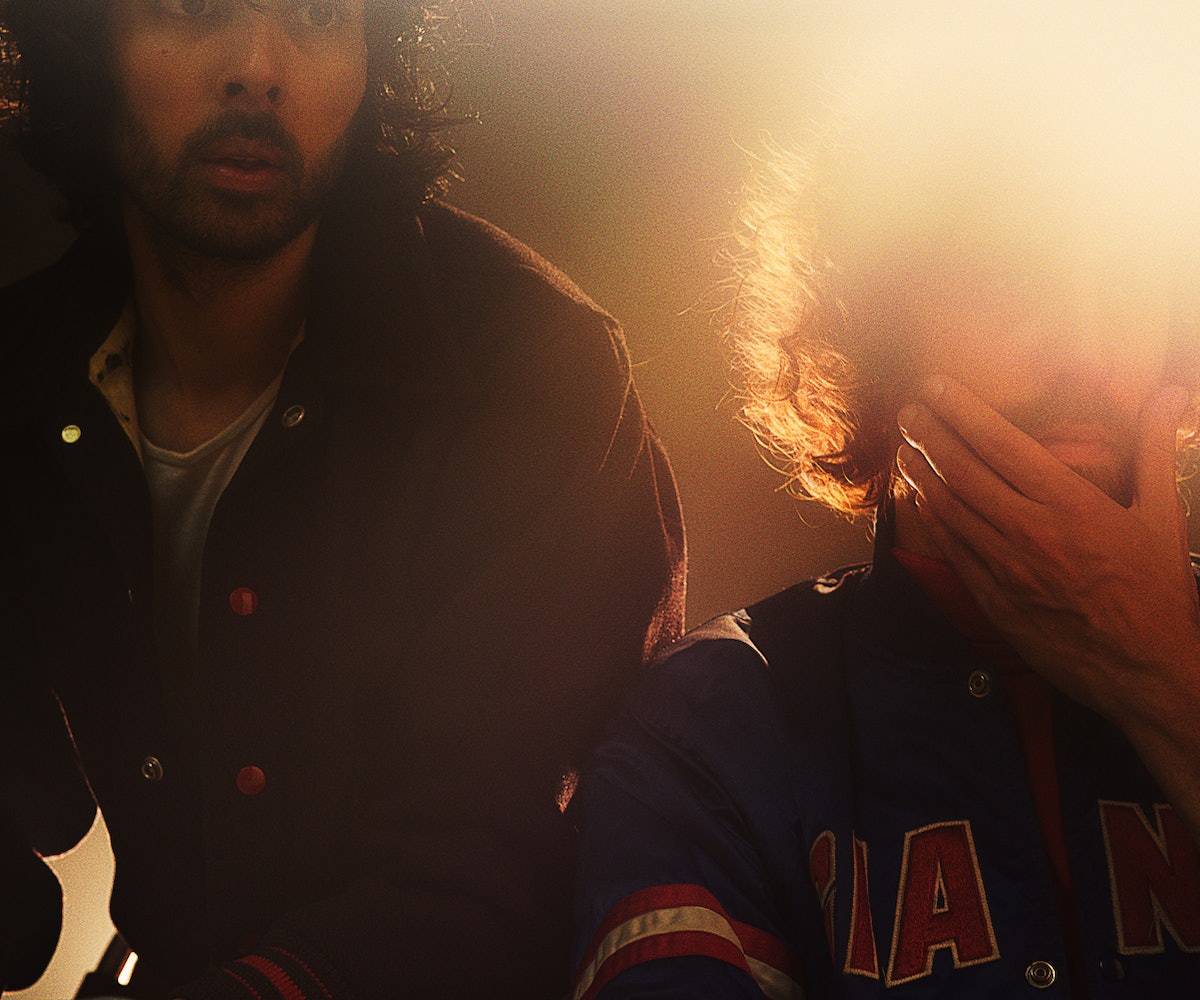 In 2007, Gaspard Augé and Xavier de Rosnay stormed the electronic music scene with their speaker-shattering debut record †. Stadium-sized hits like "D.A.N.C.E." and "DVNO" helped transform the French natives into legitimate rock stars (they have the tour documentary to prove it), as they ushered in a French electronic new wave with their label, Ed Banger Records, at the epicenter. Their widescreen songs, spanning genres from rock to disco to house, made the Justice live experience a must if you were young and felt the need to lose your mind for a couple of hours. Now, nine years later, Augé and de Rosnay have returned with their third studio album, Woman, a melodic and beautiful record that points to a confidence in who they are. Ten years into their career, Augé and de Rosnay aren't so much concerned with what people think of them, as long as they can stand behind their music. Here we caught up with the duo.

What have you guys been up to between the last album release and this one?

Xavier de Rosnay: We’ve just been doing things that we don’t have time to do when we tour or when we make an album. Just being in France, spending time with family. It’s important because the work is so intense. When we make an album, it generally takes us like one-and-a-half to three years, and this is a time when we are focused completely on the record, both physically because we are in the studio, but also mentally because we don’t have so much free space in our heads.

For this album do you have an idea of what you want to do going in, or do you go into the studio and the inspiration comes to you?

XR: We have kind of a defined idea of what we wanted to do. We started meeting in the studio in 2012, and the main idea was to make a record of pleasure, of pleasurable music, something that is good to listen to. But also we hope that people can feel it because it’s really fun and it’s very abundant. There are a lot of themes happening, and it’s very lush in the sense that it’s filled with a lot of details. If there’s one thing that is different from our previous records, it’s that there’s less showing off. There’s still a bit of it because we can’t help it and have fun doing it, but this time, we were very keen on embracing simplicity.

So much of your music in the past has been centered around the live experience. It almost felt like it was designed specifically to be played live. Is that ever a concern?

XR: No, it’s never been a concern. Obviously, when we did the first record, we never expected to be able to play such big venues. The first record was made in a basement with no air, it was like an ancient crypt. Each record is always conditioned by the place it’s made in.

Gaspard Augé: Being able to DJ live and to make studio albums offers us very different spectrums of music. For example, what we DJ has nothing to do with the album we make. It relies just on the energy—it’s very violent, very hard. Our studio albums are definitely made for home listening.

XR: When we go on stage, it gives us a chance to revisit all these tracks and approach them in a more simple manner, because being only two people, it’s impossible to reproduce exactly what is on the record, so we have to figure out ways of making things simple for us but also for the audience. Because when listening to an album, you always have a chance to listen to it again if you miss some details.

Why did you name this record Woman?

XR: It is, of course, a tribute to the women in our lives, but the main idea before that was to use woman for the powerful word that it is—woman as the originator of life, like the symbol of justice, and we’ve always been surrounded by very strong female figures, from when we were small to even now. So, for us, what the “woman” makes us think of is this kind of goddess of life and war, a very strong and powerful figure.

Does it feel like the music scene now is very different from 2007, when your first record came out?

GA: It’s cool that’s it’s different. It would be a nightmare if things would never change.

Has the streaming revolution changed how you guys approach making music?

XR: It doesn’t but maybe it will in the future. The main downside of streaming is that, of course, people will listen to fewer albums and more to individual tracks. We love making albums, and we always hope that people will listen to them from A to Z, but the best thing that streaming is bringing to the table is that now you don’t have a limit of time on an album. The length of albums was always defined by the support they were on, and now you can make an album that is like three hours long. It brings new possibilities, and already some people are using it in interesting ways. [Kanye West's] The Life of Pablo is a good example of doing something that couldn’t have been in existence like four years ago.

Your 2008 concert documentary was notorious for its depiction of excess and debauchery. Have you guys mellowed out with age, or will your upcoming tour look like that one?

XR: You can only do something for the first time one time. That’s why we shot that documentary; we knew the first time would never happen again. The main idea behind that movie was to make a music documentary that never deals with music. We wanted it to be fun to watch, even for someone who doesn’t give a shit about Justice.

So are you guys just going go to sleep after your shows? Have you made that transition?

XR: Not yet, and we hope that it will arrive as late as possible.

EDM is at the height of its popularity. Do you guys take any credit for ushering that in?

XR: I think it existed before, but it was way less mainstream. For instance, Tiesto has been doing this for 20 years. It was way more niche.

Did Justice help push it into the mainstream then?

XR: No, no, no. We were very lucky to come in at a moment where it was developing anyway, and we were part of that. It’s not false modesty. We helped develop it, but we were not the ignition of it.

What do you think about the state of electronic music today? Are you liking what you’re hearing as it’s gone more and more into the mainstream?

XR: We don’t listen to too much electronic music. For us, it’s a means before anything else. We don’t have anything against the mainstream. Once in a while, there’s a hit, and it’s amazing. “Royals” by Lorde is an amazing tune. It’s not something that we reject at all, but most of it is a nightmare to listen to. But EDM is not responsible for that. You always tend to think that things used to be better before, and it’s not true.

Well right now you have the Chainsmokers, who I guess are kind of like electronic musicians, that are dominating the charts.

XR: We never heard of them until the other day when somebody told us it was like the biggest thing, but we’ve never heard their music.

Have you been approached to do production for bigger pop artists?

XR: We’ve been approached a lot of times. We tried twice. Most of the times, it doesn’t interest us, either because the artist doesn’t interest us, or the perspective isn’t interesting to us. The two experiences—one was with a very famous old-timer, an old pop star. And the other time was with a more contemporary artist, and it was not that exciting, not that fun. It was the kind of thing where you have a team of like 50 producers and A&R people.

What current space do you guys occupy in the French music scene? Are you elder statesmen?

XR: Yes, definitely, which is strange. The first album, we were like a new sensation, the second album, it was cool not to like us. I’m kidding, but we were not old enough to be elder statesmen, and we were not young enough to be the new thing. Now we’re old enough to just exist. It doesn’t matter if we’re cool or not cool. We’re just here. It’s a good feeling. Now that there’s no hype around us, people can just listen to the music for what it is. It’s much more healthy.