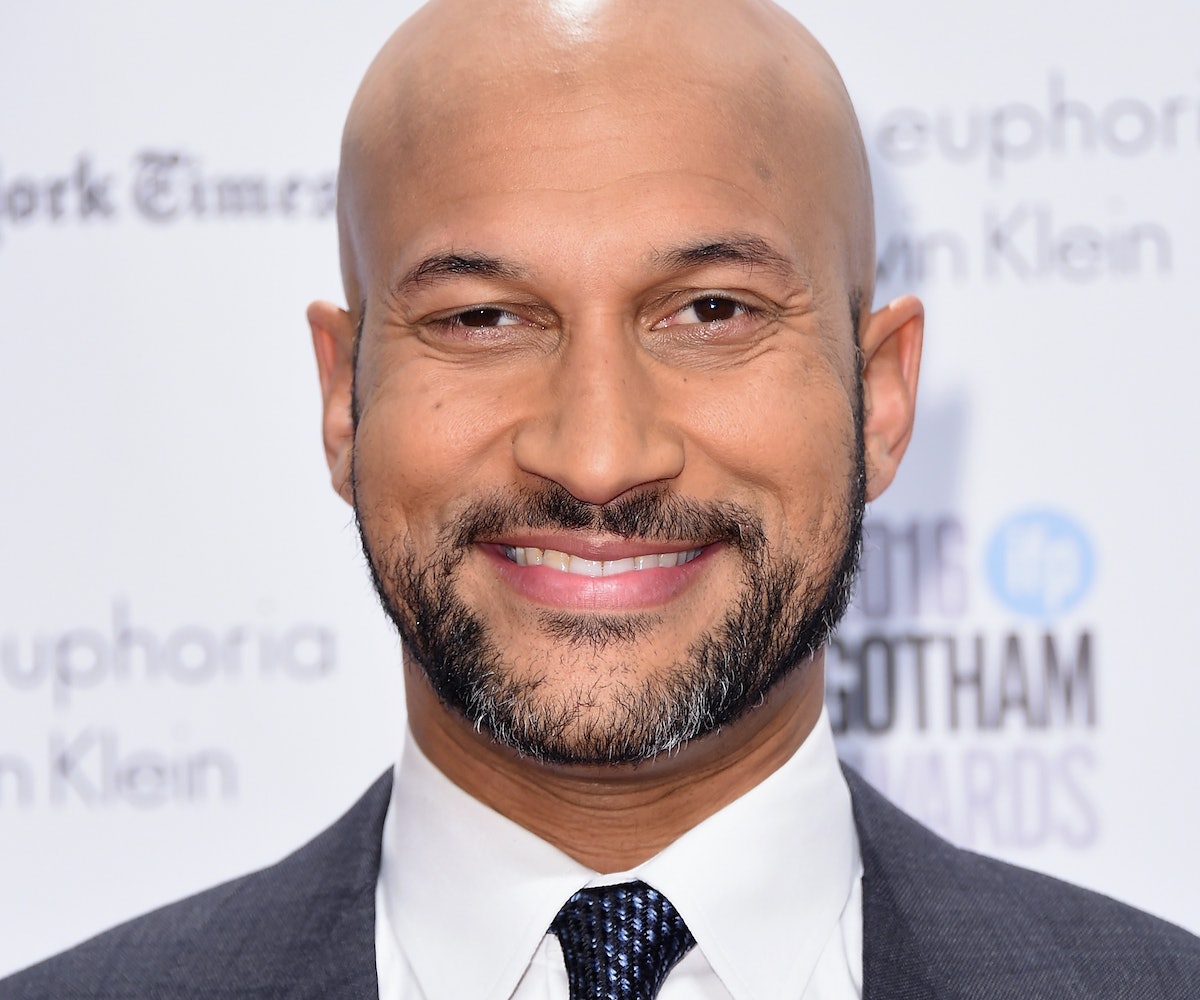 In Don’t Think Twice, Mike Birbiglia’s affecting indie comedy from earlier this year (out on DVD and Blu-Ray yesterday), Keegan-Michael Key plays a member of a tight-knit New York improv troupe who defies the odds by getting cast on a Saturday Night Live-style sketch comedy show. His sudden success sparks jealousy and eventually animosity amongst those he left behind on the lower rungs of the showbiz ladder (an excellent ensemble that includes Birbiglia, Gillian Jacobs, and Chris Gethard), as they struggle to come to terms with the idea that their own dreams might not come true.

Like his character in the film, Key came of age in the comedy world’s minor leagues—Chicago’s Second City—before getting called up to join the ensemble of Fox’s Mad TV, which, during its 14-season run, tried to steal some of SNL’s audience with varying degrees of success. It wasn’t until Key joined forces with Jordan Peele to create Comedy Central’s madcap sketch show Key & Peele that he reached the heights of comedy world success. Since retiring Key & Peele last fall, Key has appeared in many films and remained a force in the internet’s viral video ecosystem, appearing as President Obama’s “Anger Translator” at last year’s White House Correspondents' Dinner and as a weatherman predicting the effects of a Donald Trump presidency before such a thing was imaginable. We spoke to Key recently about finding (and keeping) success in show business, how he's processing President-elect, and what Barack Obama is really like.

What was your relationship to SNL growing up, and how much of a goal was it to get on there?

I wouldn’t say it was a dream to be on there. I didn’t even know that I could make it a goal, so I had no course to get on the show. It never occurred to me that I could do it, but it was something I would dream of. Sometimes I would do sketches for myself in my head or stand in front of the mirror and pretend like I was hosting.

When you got cast on Mad TV, is there a part of you that was disappointed that it wasn't SNL?

I feel like there was a part of me that felt that initially; like somehow I was missing something. But ultimately it sunk in that you’re doing something that millions of people don’t get to do, and hundreds of thousands of people a year want to do. So when you just appreciate where you are in the moment, you are really in a position where you go, "Oh, this is great, and I’m going to try to work really hard at not letting it be sour grapes."

Was there ever a point in your career where you worried that you might not make it in show business?

There wasn’t. I think earlier in my career, when I was in Second City, there were times where I just thought to myself, Hey, if I lived here in Chicago and did theater for the rest of my life, that would be a pretty good living, a pretty great existence. But there’s always that nagging dream that you fantasize about for the rest of your life. But I tried not to think that way—it wasn’t as big a goal for me. When I got to Second City, it was like I had reached my goal. After that, I just thought anything else is cake—I mean, sorry, everything else is icing. I got the cake.

When you made it to Mad TV, did your success affect your relationship with any of your peers the way it does in the film?

No, actually it’s not something I can directly relate to. I have other colleagues who can directly relate to it, but I couldn’t. Somehow I was shielded or protected from those kind of comics. If my memory serves me, people were very supportive of me going and very supportive of me having this opportunity. If there were people talking behind my back, I’m not sure who they were.

Are you at a point in your career where you can be completely confident in its longevity, that no matter what happens, you have a safety net thanks to your past success?

I wouldn’t say no matter what. There are different degrees, right? One degree is to make the most of when the sun is shining, because you don’t know when it's going to go away. And then the other degree is, "I’m afraid for my career every single moment of my life." It’s going pretty well right now, and I’m going to ride the wave, and I’m also going to take the opportunity to face any kind of fears or concerns I have and still try to be an artistic being, even if there are projects where you can go, "This will offer you money and secure you financially for a long period of time or this project over here will fulfill you artistically." Just have faith that things will come down the pipe as they’re supposed to.

Before the election results, you played a weatherman on the internet predicting the effects of a Trump Presidency. Could you have possibly imagined how prescient that video would become?

I guess I would have to say I had no clue, no inkling. None whatsoever. And it’s so funny because just yesterday [at the time of the interview] was the first article that came out that I know of, where I made a comment in that video about the wall costing tons of money and not going through, and then yesterday was the first article that said, "So here’s the reality of what would have to happen to build a wall..." And I was like, "Oh there it goes, it starts." You can say stuff and apparently a whole lot of people will believe you. I didn’t see it coming—100 percent did not see it coming. But I live in New York City, so.

Do you find yourself still struggling to make sense of how exactly this happened?

Well, right now, I’m moving on to the acceptance stage. I’ve moved past the denial and I’m in between anger and acceptance, or maybe anger and bargaining, or maybe I’m past bargaining. I think that I’m trying to think back to my life when I was younger, and the fact that a lot of my relatives are people that live in rural areas, and if I think back and if I make an effort to see where they’re coming from and how they feel, it’s not much of a surprise. Now I think for a lot of my friends, it’s very difficult for them to accept. I can entertain a whole bunch of theories and ideas, and by the way, I do, but as of this moment, as I’m speaking to you, this man is the President-elect. A bunch of people in this country wanted their voice to be heard, and that’s what I’m seeing at this moment as things reveal themselves over the next month, three months, 100 days, we will see what happens. So yeah, I’m already at the acceptance that the event occurred. Now I think I have to go into whole new grieving patterns with new events that take place, whatever that may be.

Is it inevitable that you will at some point respond to the Trump presidency through your art?

Let’s put it this way: It’s already happening. That’s the only answer I can give you.

You’ve had the pleasure of meeting Barack Obama at the White House Correspondents' Dinner. What can you tell us about him?

What was so fascinating—and that was the second time I had met him—was that he is as reserved and cool as you’d think he is, but he’s got a really great sense of humor. You can see this on camera, but his sense of timing is really impeccable. He has such a theatricality, so he was like, “We’ve got to do this seriously for it to come across comedically.” We started at rehearsal, and I said the first line and he burst into laughter. After the first line, I said, “Sir, you’ve got to get it together.” And he goes, “Sorry, you broke me up there, you got me broke up.” He’s got a lovely, warm, effusive energy about him. I think people very often see this very reserved guy, but in person, it comes across very casual and not collected and cold.

You have a show coming out on Netflix called Friends from College that sounds very promising. What can you tell me about it?

Nicholas Stoller, who created the show with his wife, Francesca Delbanco, is a fantastic director. He has this lovely knack of being able to put slapstick material and thread it into the middle of all this kind of grounded, realistic comedy, which is a very difficult skill to learn. It’s a show about six friends who all graduated from Harvard together, and kind of the main thrust of the story is that there is a couple who are moving from Michigan to New York to rejoin their friends. It is essentially a four-hour movie, but it’s being designed to be extremely bingeable. It’s been cut into eight little episodes, but it really is just a long film based on how we shot it. I really have a good feeling about it.