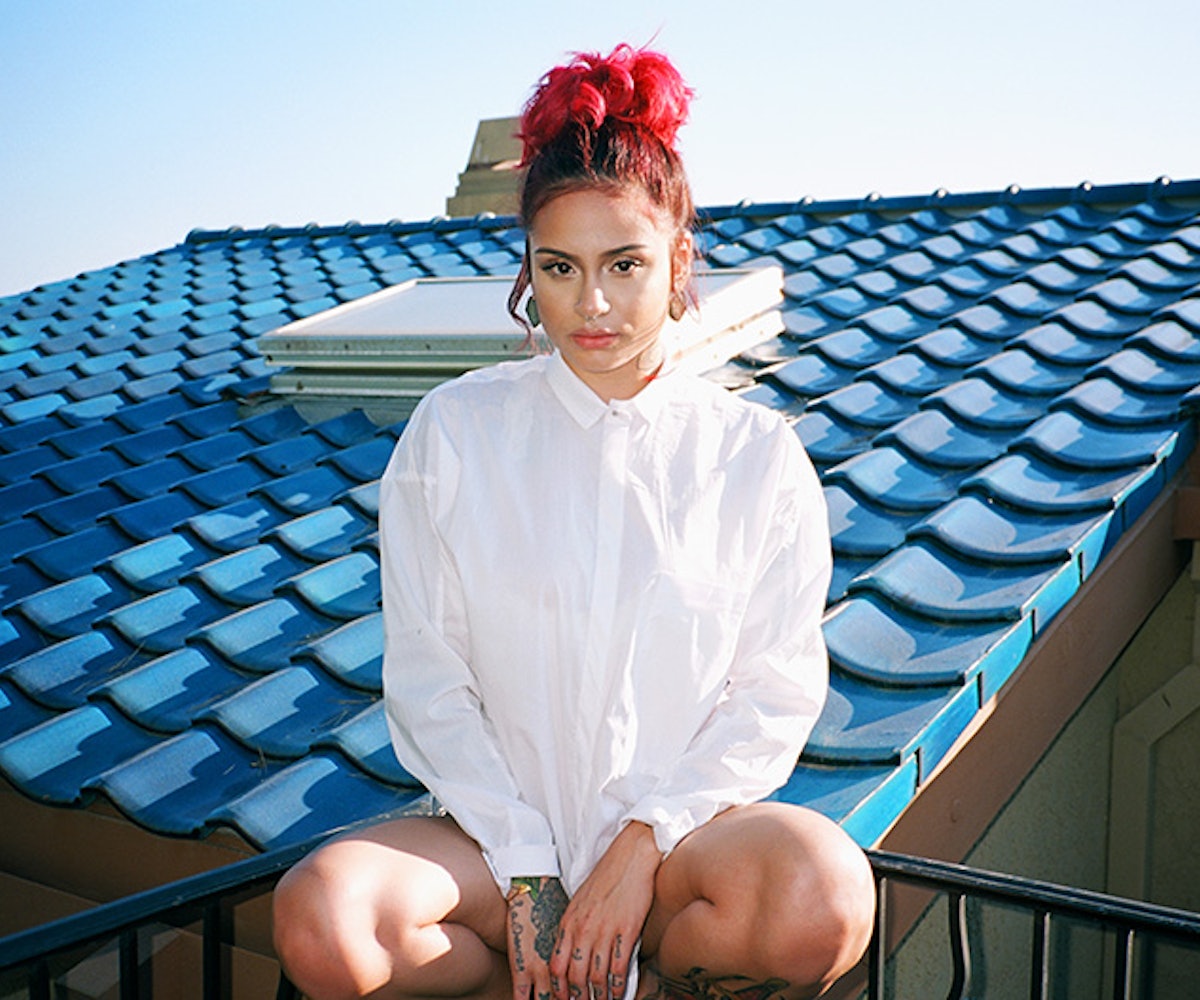 If it seems like the people featured in buzzy success stories are getting younger by the minute, that's because it’s true. Bay-area native Kehlani is just shy of turning 20 and already has one wildly successful project under her belt (2014’s Cloud 19) and is slated to have another hit record when You Should Be Here (YSBH) drops Tuesday, April 28. It’s pretty safe to say, if you don’t know her name now, you will by the time 2015 bows out.

Her drive is what puts her in her own special class of R&B artist. Even though our conversation happened over the phone, it’s clear the girl’s resilient. She’s coming up at a time when her contemporaries favor enigmatic identities over boisterous ones. Though, Kehlani isn’t boisterous; she’s got a magnetic confidence to her that she wears on her heavily tattooed sleeve. The girl’s got spunk—plain and simple. It’s no wonder she was signaled out as a solo artist during her stint on season six of America’s Got Talent. She commands the attention of everyone already. And deserves every single bit of it.

It’s been nine months since you first dropped your mixtape. What’s been the most surprising thing that’s happened to you?

I think going on tour and having people in the audience sing all my words—you know, doing shows and not having to sing a single lyric because the audience knows everything—is surreal. All these things I used to dream about are happening. You don’t really know it’s real until it’s happening. It’s one thing for people to recognize you on the Internet, but then another thing when it’s in the real world.

That’s wild. What would you say has been the most challenging part then?

Trying to focus on what I’m going to do next, you know what I’m saying? The next thing has to be big, a bigger project than before. I focus on all of my projects but the next thing is going to require a ton more.

Clearly! Now, with you being 19 and all, what sort of pushback, if any, have you receive? Are people trying to mold you in a certain way because of that?

I think at first, yeah. I was meeting people who were a lot older than me and having to prove how driven I was because I really didn’t have much to show for it. But now I’m 19, I’ve got this mixtape, I went on tour, and I’ve got another one dropping. Now I’m in the room with these people and they already know I can deliver. Most of them are like, “Damn! I wish I was doing what you were doing at your age.” Everybody starts somewhere and everybody moves their own pace—my start just happened to be really early.

Has that drive ever turned off anyone? You touch on it a little in your song “Get Away.”

I mean, with guys I feel like it’s funny because for a while it was very intimidating. A guy would expect to be “the guy” in the relationship. And yeah, I think people expect me to play the whole girl-guy thing. I had a guy that was intimidated because I had fans. I’m had to tell him, Yo, I’m not going to talk to any of these people, they’re fans, you know what I’m saying? They like my music; we’re not about to have a romantic conversation. Some get mad because I’m the one with all the opportunities but that’s because I’m the one working my ass off. I think in my situation, yes it is hard to find someone that accepts that, but they are people out there. It’s not impossible.

It’s wild. Every person who I’ve been following has been younger. It’s insane to me how many successful teens and young twentysomethings there are now.

This whole generation is pretty insane.

Are you tired of the “wise beyond your years” label?

At this point, my age isn’t the first thing that comes up anymore. It’s all about getting to work right away. Somebody might comment and say something like, “Yo, can you believe she’s only 19…” It’s a cool surprise, I guess. You can usually tell a 19-year-old from a 30-year-old, but you can’t really tell with me.

Totally, and the stuff you’re writing about doesn’t come off as “young” per se. Rather than talk about partying and bullshit, you’re reflecting on solid relationships. Would you agree with that?

Yeah, I mean I was about the party life when I was 16 and 17. Like all that wild stuff people are doing now? That was the stuff we were doing in Oakland when I was, like, 17. I’ve been drunk at the parties, tried all the crazy shit, and had all the wild adventures. So by the time I’m practically able to go to the club, I don’t have any interest.

I completely get that. You see how it can affect a career.

You see the bigger picture. I realized right now I’m 19 and I’m young, my body is able and my mind is able; I’m most agile and have all of this ability. I need to go hard so that, if I want to party and chill and put my feet up, I can when I’m older. But right now is not that time.

How many tattoos do you have?

Do you have any tattoos you regret?

No, I don’t really have regrets. Some of the artwork has lost its appeal, but what they are, no.

Some people use tattoos as bookmarks to certain chapters of their life. What purpose do they serve for you?

They’re reminders. Things like, don’t forget where I came from, or like, what I came from, certain situations I’ve been through, or people, you know, stuff like that. Some are moral reminders and show what I believe in.

What can we expect on the new project?

There definitely are a few surprises. I’ve got some songs on there that don’t sound like I think people aren’t expecting me to sound like. I really pushed myself with this project and I think it’s way more mature than the last one. The other one feels very youthful. This one is definitely a step towards maturity. It’s definitely bigger and older.

Specifically, how do you hope to inspire girls with your music?

I want to show girls that they have to like don’t have to conform to what’s “in.” You know what I’m saying? I feel like there are a lot of girls who start making music and play their stuff, and it’s just like this wannabee radio sound. I feel like they don’t understand that the people that are actually succeeding at it are doing what they’re actually good at. The main problem is they wake up and go “I want to be the next so and so, or I want to be the next blah, blah, blah.” If you genuinely like making music, make what you love and make what you fall in love with, you know? Show the men you can be up there with the guys and their field, get in what’s considered to be their lane and totally crush it. You don’t have to overstep your personal line; you don’t have to hide your sexuality. You can pretty much, do whatever the fuck you want, you know what I’m saying?