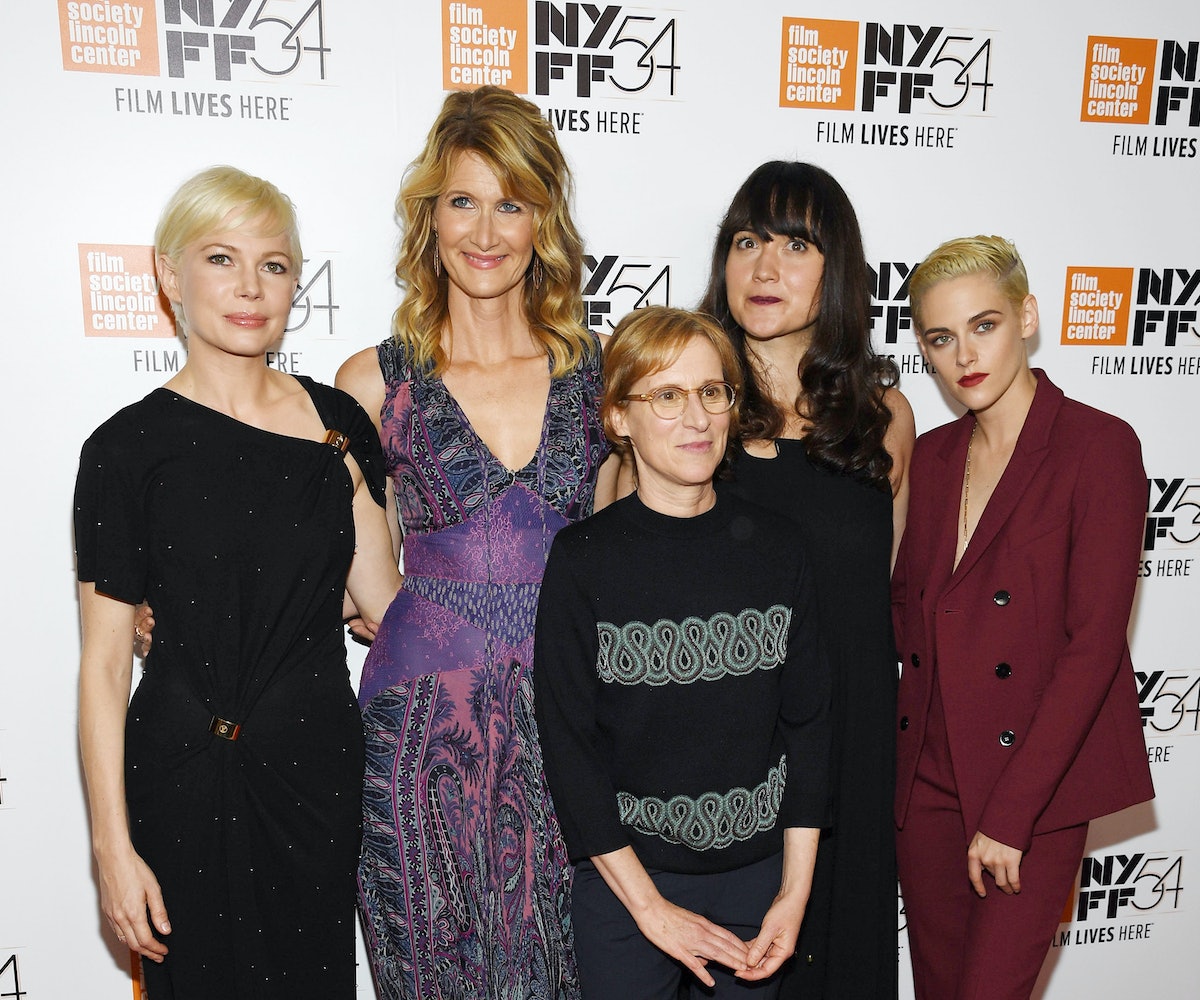 The films of Kelly Reichardt tend to be small and minimalist, but they aim for the jugular, and they don't miss. They're gently told stories about people with fragile, ordinary shells that through the progress of story and circumstance end up cracking, revealing extraordinary inner lives. Reichardt’s steadiness and grace as a storyteller, seen in films like Old Joy, Wendy and Lucy, and Night Moves, have earned her a spot among the giants of American independent cinema. Her films are always set out West—in Oregon, mainly—even though Reichardt herself was born in Miami and has made her permanent home in New York City for more than a decade.

Her latest movie, the quietly powerful Certain Women, took Reichardt and her crew to small-town Montana, where she endeavored to tell a triptych of character studies based on the short stories of Maile Meloy. In the first of these stories, Laura Dern plays a lawyer dealing with a very low-key hostage situation (everything in Reichardt's films feels low-key, even when it's not). In the second act, Michelle Williams, who has worked with Reichardt on Wendy and Lucy and the Western Meek's Cutoff, plays a wife and mother trying to build a country home while her marriage unravels. And finally, newcomer Lily Gladstone stars as a shy rancher who falls for her introverted night school teacher played by Kristen Stewart, who was born to be in a Kelly Reichardt film.

We spoke to Reichardt last Friday, the same day Certain Women opened in theaters after nearly a year on the festival circuit, about what she learned making this movie, why she'd never make one in New York, and the technical brilliance of Stewart's acting.

It’s opening day for your movie. How do you feel?

I feel good. I'm sitting here folding my laundry. I mean, it's nice because it's not like a festival where there's so much hubbub and getting dressed up. It's just getting on the subway and going to do some Q&As, which will be nice.

When do you say goodbye to a project? Is there a moment you fully let it go?

You kind of let it go a couple times. I let Certain Women go after it was done being made, which was in January, and then a month later, you're going to Sundance with it, so you kind of get back into it. And then, I let it go after Sundance, until now. I've been working on something else all this time, and it's like, “Oh my god, get your head back into Certain Women." I'm thinking by Thanksgiving this will all be totally done and I'll have it behind me.

I assume that you learn new things about filmmaking with each movie that you make. What did making Certain Women teach you?

One thing you learn over and over again is to trust your own instincts. It's an imperfect situation, but I find it easier to be mad at myself than to be mad at other people because I'll eventually let myself off the hook. And so, one lesson—we're always just shooting in such volatile, weird weather—is to not react to everything that's going on around you. Everyone's doing their job, and everyone thinks their area is the most important, and that's what you want them to think. And you should listen, and you should respond to everyone, and I think keeping your eye on the performance and what's going to work for your actors instead of what's happening with the weather. And that gets easier as you get older and more experienced. I have as much experience as anyone else on my set, so I might as well listen to myself.

Is it strange having someone as famous as Kristen Stewart on the set of your tiny independent movie? Is there something anachronistic about it or does it feel totally natural?

No, our films are a great equalizer because we don't have money to treat anybody as if there's this different range or class of people. [During the Night Moves shoot] Dakota Fanning and Jesse Eisenberg lived in the same hotel as the person doing our craft service. Same with Kristen. We don't really have the finances to have these different levels, so there's very little division between the cast and the crew. It's almost one fluid thing, and it's pretty intimate. I can remember Dakota crying when she left us because we had another week or two of shooting when she left, and I remember she called me from some red carpet she was on and was just like, "I'm so sad I'm not there with you guys." People get very attached to it, as Michelle has, because they become friends with the crew. Kristen had all the crew over to her place on a day off. I think actors like that they're not in some separate trailer having some separate experience, and my crew includes some really great people.

Was there anything revelatory to you about Stewart’s performance? Did she teach you something about acting?

Yeah, Kristen likes to kind of learn her lines as she goes, and I found that surprising and scary. So it just meant that that shitty hamburger she's eating in the movie, she's eating 13 of them. I was just like, "I don't know how you're going to do it." Also, there's not one lead in the movie, and she's not even the lead in her section. It's the rancher's story. And I was really aware right away that she was totally comfortable with that. She always wanted Lily to do her scene first, and she wanted the camera to be on Lily first. I was amazed at how she let herself be inconsequential sometimes in a scene.Then, there were other things that I didn't really realize until I was in the editing room, and they were just more technical things, that she has an easy way about her and you don't necessarily think of it.

What do you mean when you say technical skills?

She sort of knows when to throw a glance, and when she doesn't even have dialogue, it's almost like she might be anticipating where a cut might go, and she's giving you a movement to cut on. So you realize, "Oh, she's been doing this for a really long time," and she's just really aware of the space and where she is in the frame, as are actors that have done it for a long time. I did not realize that was happening on set, I was just kind of caught up in the performance, and when I got in the editing room, I realized she was giving me a few little presents.

You’ve lived on the East Coast for most of your life, and yet you make all your films out West. Have you ever been tempted to make a film in New York, where you live?

I like getting away to make a movie. With this film, I'm making a conscious effort to give myself some interiors. I started out shooting exteriors because I couldn't afford lights or a crew. And then I just became, over time, more comfortable shooting outside and knowing how to work a landscape more than an interior. And when we were making Night Moves, focusing on the dam and all this huge maneuvering that was going to happen outside, I knew how to do that. And then we got into a kitchen scene one day, which I hadn't given as much thought to, and there was were four walls, and I was like, "What the fuck do you do with four walls?"

I like going off and making films in private, where the hassles of everyday life aren't there. And also, selfishly, you're taking your crew away from all the things in their everyday life, so they're completely focused on your movie.You talk about shooting with these name actors, but when you're in Montana, it doesn't fuckin matter. I watched my friends make a film with Kristen Stewart in cities, and every time she walks out the door, there are teenagers waiting for her. I don't want that shit around my movie set.

Are you aware of your position in American cinema? Many people revere you and your work. Is that something you pay attention to?

I just don't really encounter that. So it's not, like, in my life.

Right, but right now, there's a big story about you in The New York Times Magazine. Will you bother reading that?

My friend read it for me and reported on it to me. I actually really like Alice Gregory's writing, she's really good. When it doesn't matter anymore, I'll go back and read it, but I'm not going to read it right now. You can't have too much of this stuff in your life. It's not good for you.

Is there a part of the moviemaking process that you detest?

The cold. The cold. Totally, the cold. It's was so cold making [Certain Women], and at some point, I was like, "Oh my god, this is a younger person's game, I can't stand out here in negative degree weather for 18 hours anymore." And I think the hardest thing is that because we work on small budgets in remote places, we just stretch ourselves so thin that you don't have time to really settle into it the way you want to. Actors are more taken aback by the speed we're doing things than by the lack of frills. The lack of time to do stuff, that's the hardest thing.

There's no such thing as making a film without stress. I think if there was a little bit more support—I understand what the nature of these films are, and I understand why the budgets are low and the world I live in. But I do sometimes feel like you're in a band in your 50s and you're still touring around in a van, and you're like, "Ugh, do we ever get the bus?"