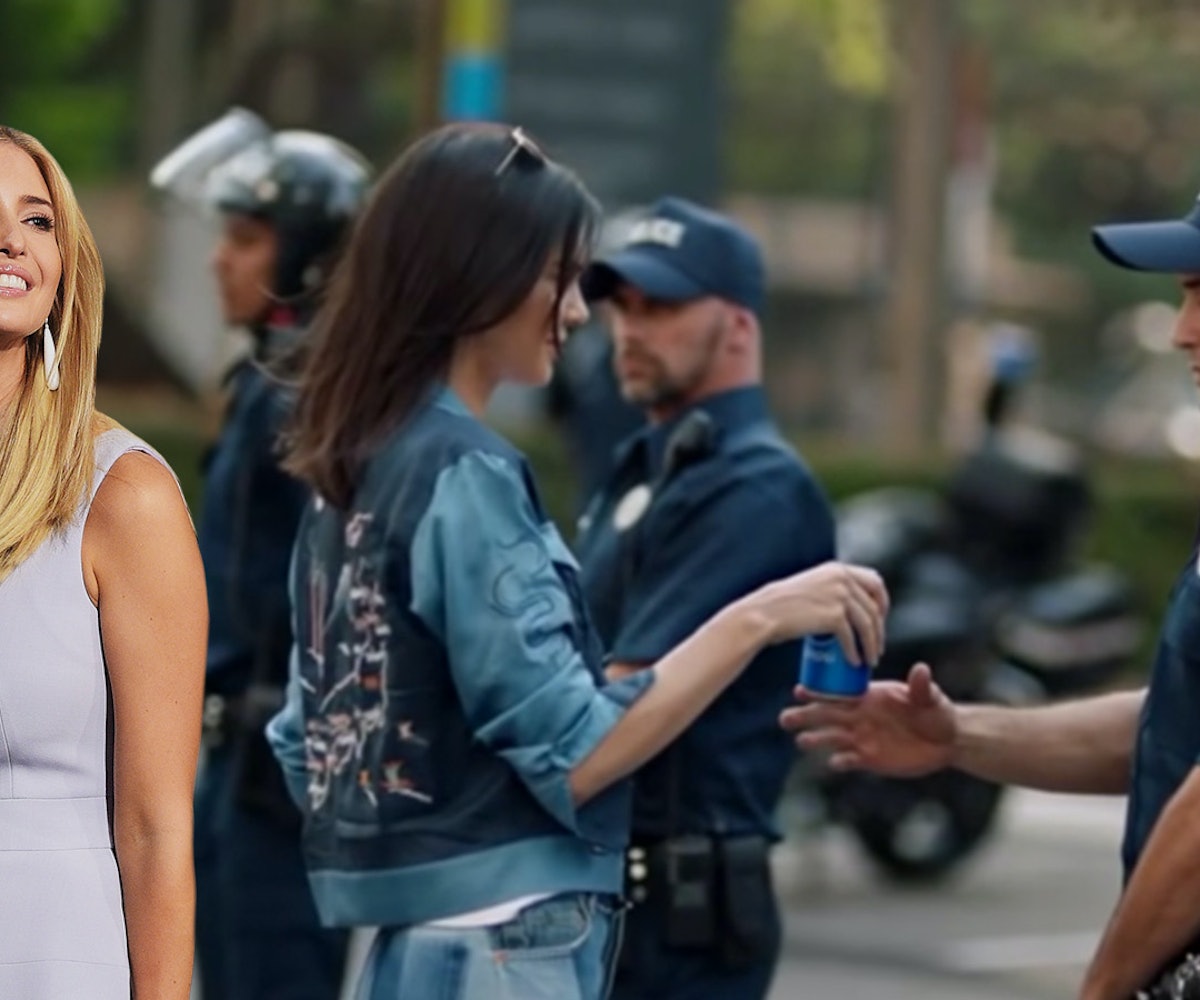 Two bizarre things happened on the internet late yesterday afternoon: Merriam-Webster experienced a spike in traffic, thanks to a surging number of people looking up the definition of the word "complicit," and suddenly everyone was talking about Pepsi. Strange times. We know.

While, at first glance, these online anomalies seem to be unrelated to one another (the former was thanks to the fact that Ivanka Trump told Gayle King in an interview for CBS This Morning that she doesn't "know what it means to be complicit," while the latter was based on a Kendall Jenner-fronted Pepsi commercial, which leaned heavily—and ill-advisedly—on protest motifs), they actually share one very specific thing in common; they are prime examples of the obliviousness and entitlement that comes with being a privileged white woman in Trump's America.

When clips of Ivanka's interview began to make rounds online yesterday, they were widely circulated as further evidence that she is in no way the moderate, regulating force upon her father that some people once hoped she would be; since Donald Trump has assumed the presidency, he has proven time and time again via things like the immigration ban, commitment to dismantling Planned Parenthood, and draconian budget cuts that he is more of a hard-liner than even some of his harshest critics assumed pre-inauguration. And so Ivanka's recent rise in rank to join the White House in an official, if unpaid, capacity as an adviser is only further proof that she supports her father's actions fully.

It is, then, only fair to assume that Ivanka is complicit in these actions, and it was this assumption which King addressed in the interview, asking Ivanka how she would respond to those who called her complicit. Ivanka said:

It is hard to believe that Ivanka doesn't know the meaning of the word "complicit" (though perhaps she was one of the many people searching for it yesterday?). Rather, her words betray a trait Ivanka clearly shares with her father—namely, a refusal to be constrained by what words actually mean (see: Donald Trump and "wiretap"), thus granting Ivanka the ability to say and do whatever she wants without facing any negative consequences, and only potentially reaping the benefits. This approach is one shared by many Trump voters, particularly white women, who have expressed surprise that Trump's horrific decisions, as they pertain to things like women's health care, will negatively affect them. Much like with Ivanka, these Trump supporters claimed to only have the best intentions when voting for him and refused to see the ways in which his administration would hurt millions of other people, caring only about how they would benefit. It is a singularly self-interested way of existing in the world, and it's alarming to see it existing on such a large scale in this country.

But living with blinders on is not just the provenance of right-wing Americans. Need proof? Look no further than the Pepsi ad which went viral yesterday. The commercial centers around a large protest (against what? It's hard to say based off of the marchers' laughable signs asking people to "join the conversation"), which attracts the attention of Jenner, who happens to be... modeling nearby? I don't know. All I do know is that Jenner quickly whips off her blonde wig, smears her lipstick, puts on some distressed denim, and manages to defuse the tension between protestors and police by giving a cop a can of Pepsi. And just like that, racism is solved, injustice is reversed, and history is filled with rainbows of happiness.

The strong reaction against the Pepsi ad was swift and referenced all the things wrong with it, like the way in which it copied iconography from the Black Lives Matter movement, was beyond reductive in its treatment of the historic reality of police brutality, and the manner in which it implied that the revolution's savior would be a rich, beautiful, white woman. Pepsi has responded to the backlash, saying that they only had the best intentions and wanted to tell a story about "people from different walks of life coming together in a spirit of harmony." (Jenner has not yet weighed in on the controversy.) And while it's clear that this is what Pepsi probably wanted to do, in theory, the reality is that by co-opting the narratives of movements like Black Lives Matter, what they wound up doing was being complicit not only in the erasure of actual revolutionaries, but also in the promotion of the idea that privileged white girls will save us all. And that is, in its way, as much of a problem as what Ivanka is doing when she pretends that being "complicit" simply means "wanting to be a force for good."

Both Pepsi and Ivanka clearly think that they are working for some larger "force for good." The fact that they both use similar language shouldn't be surprising—Ivanka has a long history promoting herself as a brand after all. And yet, it is still troubling. What it makes clear is that both sides of the political spectrum have an interest in promoting a singular narrative: It is enough to want to be doing good, even if good is not achieved. Thus, Ivanka can talk about how she has a subtle influence on her father, one which perhaps "most people will not actually know about." (Maybe because it doesn't even exist??) Ivanka can say that, though, and ask for the public to believe her based on the fact that she's promising that she's working for good. And Pepsi can say that it wanted to promote a message of "harmony," when it is stealing from political movements which are hard at work trying to achieve some approximation of equality and justice. Does Pepsi intend for its message to be one of positivity? Sure, but who cares when it actually proves to be divisive and tone-deaf?

It is no longer enough for people and companies to want to be doing good; there is now an imperative to actively be doing it. There needs to be accountability for those who promise that they're trying to be helpful but are actively failing. This means that everyone needs to be held to a high standard, not just Ivanka or Pepsi executives. Rather, these two examples demonstrate how insidious the idea is that it's enough to have good intentions, even if they're not backed up by actions. These two examples demonstrate the dangers of the type of activism which promotes signing online petitions and wearing safety pins or retweeting messages about women making less money than men, rather than actually doing anything of import. These two examples show what it is to be complicit in a cultural narrative which seeks to reinforce the idea that the real problems in this society can be solved by a white woman with a camera-ready smile. But these two examples also show that more and more Americans are not buying this story anymore; they refuse to be complicit in this fallacy, and they're not going to buy what is being sold.