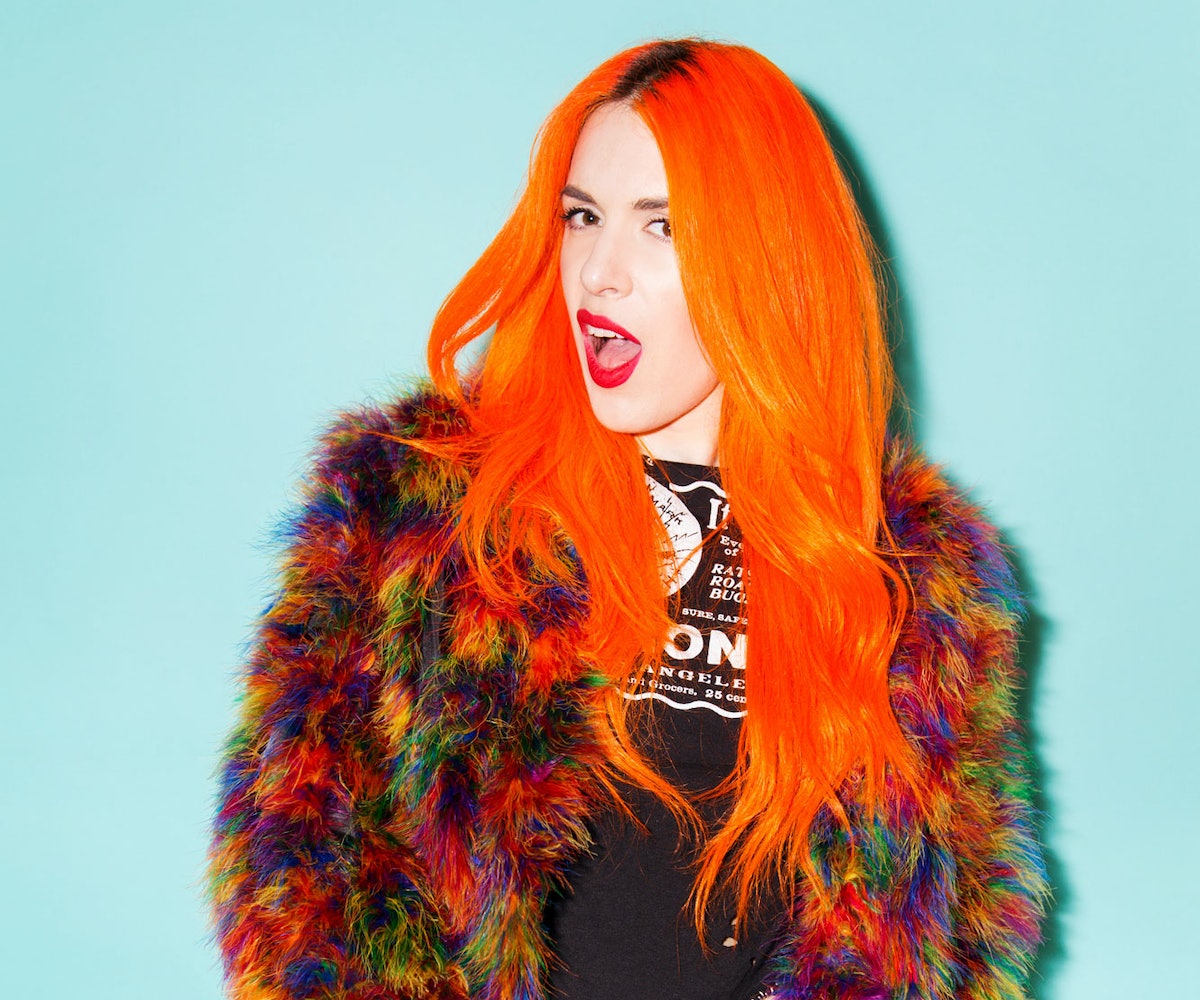 My name is Kerin, and I’m a recovering party girl.

In my late teens and early twenties, I hung with rock stars—from the club to the afterparty—made out with boys whose names I never knew, and was the last to leave the bar on many occasions. Sometimes I even got paid to dress up, go out, and hold court at a VIP table with bottle service while my favorite DJs set the mood. I wore outrageous getups—often not much at all—and had a blast while doing it. But I never woke up wondering where I was, or face-palming after a night of embarrassing text messages, or spent a day nursing a hangover—because I did it all while sober.

When I was really young, I decided to spend my life free of drugs and alcohol. My parents seldom drank, and talked to my sister and I about alcohol and drugs at an early age. I wasn’t even 10 years old when, during a fun dinner conversation, my dad remarked, “I love and trust you girls, but if I ever catch you drinking before you’re 21 or doing drugs, I’ll take you to the jail myself and pick you up 24 hours later.” My dad has a marshmallow heart, but he was also in the Israeli army for most of the '70s, so his threats are promises. When my friends started drinking as teenagers, it turned me off even more. They never drank just one beer, and to me, there was nothing appealing about chugging a case of “Natty Light” and passing out on a basement couch. As for drugs … the main reason I’ve never experimented is because I don’t have any desire to alter my conscious state. Personally, it has always been important for me to feel things, be aware, and be able to take responsibility for my actions. Too many people blame shitty behavior on their state of sobriety. “Sorry, I was drunk” fills me with the hate-fire of a thousand suns. I’ve been on the receiving end of that statement more times than I've cared to be, and I never wanted to be one of those people myself; if I did something to piss you off, you better believe it was on purpose. Speaking of altered states, can I tell you guys a secret? There was an episode of Beverly Hills, 90210 that helped scare me sober. I must have been 13 and only remember a few minutes at most, but they play back vividly. Kelly is yelling at her artist boyfriend Colin about his cocaine habit and he breaks down, saying he’s only ever painted while high and is afraid he can’t do it sober. Something about that scene terrified the young artist in me, turning a “probably” into a “definitely” in my decision to live a sober lifestyle.

I’m no prude. I’ve been around more than my fair share of drugs and alcohol; being a teetotaler (a person who abstains from alchohol) doesn’t mean I’m an asshole about it. I’m happy to grab you a drink at the open bar. A lot of my friends smoke pot (I was even interviewed for High Times myself), and I’m all for the legalization of marijuana. There’s just nothing about smoking it that appeals to me personally. The concept of inhaling cigarettes, pot, etc. is as unnatural to me as trying to breathe underwater. I legit don’t think I could do it even if I wanted to. The same goes for trying to snort something: No thanks, I’m good. I’ve tasted beer, wine, and other various alcohols … they just don’t do anything for me. (And while I’ve never been a dieter, I understand how calories work, and will happily choose to spend a few hundred of ‘em on an expensive piece of good chocolate over an adult beverage any day.)

I got a lot of questions about being a sober partier. The most common is: How can I have any fun? To be honest, if you’re out at a bar, club, rave, or basement and you’re not having any fun sober, you’re at a shitty party. In my humble opinion, drugs and alcohol should be used to enhance your experience, not replace it. People often wonder how I can go out and get crazy without “liquid courage” or whatever, and then I show them photos of times I’ve been at the club in pasties, just living my life. If I can go out topless and just kick it, do you really think I need to take something to “let myself go"? I have awesome friends who throw awesome parties, so any random night out is hella fun. Sometimes people can be assholes about it. “You’re not drinking? What’s wrong with you!” I just remind them that any shot I don’t take equals one more for them, and the fun continues.

There are a ton of advantages to partying sober. I’ve had so many good times and I’m able to remember them all. Like everyone, I’ve had a few nights I’ve regretted, but it’s a number that would have been way higher had I been even a little loose. I’ve never woken up somewhere I didn’t remember, and have never done a walk of shame. I always knew exactly how creepy a dude was when he was hitting on me. While I hate to admit it, I feel safer when I’m out sober. I was single and living alone for a long time; being able to avoid sticky situations and get home safe was paramount. Physically, I’ve never experienced a hangover or a crash. These are not experiences that I long for either. And my wallet thanks me, too. I worked summers in high school and two part-time jobs for my entire college career so I could feed and clothe myself as an adult. Do you guys know how expensive drugs and alcohol are?! I’m a Long Island Jew! The thought of all that money chugged, smoked, or snorted away makes me want to cry.

I don’t go out much anymore. After hitting clubs regularly for 12 years, things started to feel a bit monotonous. I find it much more satisfying now to have super chill nights at home, and invite friends over (BYOB if they want to). Besides, I can’t go to sleep at 4am and wake up at 8am like I used to. Getting older is a bitch. I don’t have any more derelict friends to stay out with, and a lot of those derelicts grew out of their nonsense anyway. Being in an awesome relationship means that I’m not hitting the bars to make out with a dude; I can do that from the comfort of my own home, thanks! But even before “settling down,” I bowed out from the party life. I like to joke that I’m retired. Now I only go out for work-related events, or as a show of support when good friends of mine are DJing or throwing a dope party. Quality over quantity! But trust me, when the right night comes around, I’m back out there, completely sober and having a blast.

NEXT UP
Culture
Caroline Polachek In KNWLS & More Party Photos You Missed
Culture
On The List (With Melissa Rich): How To Throw The Ultimate Apartment Party
Culture
Phoebe Dynevor Will Not Return for Bridgerton Season 3
Culture
11 Must-Read February 2023 Books
Style + Culture, delivered straight to your inbox.