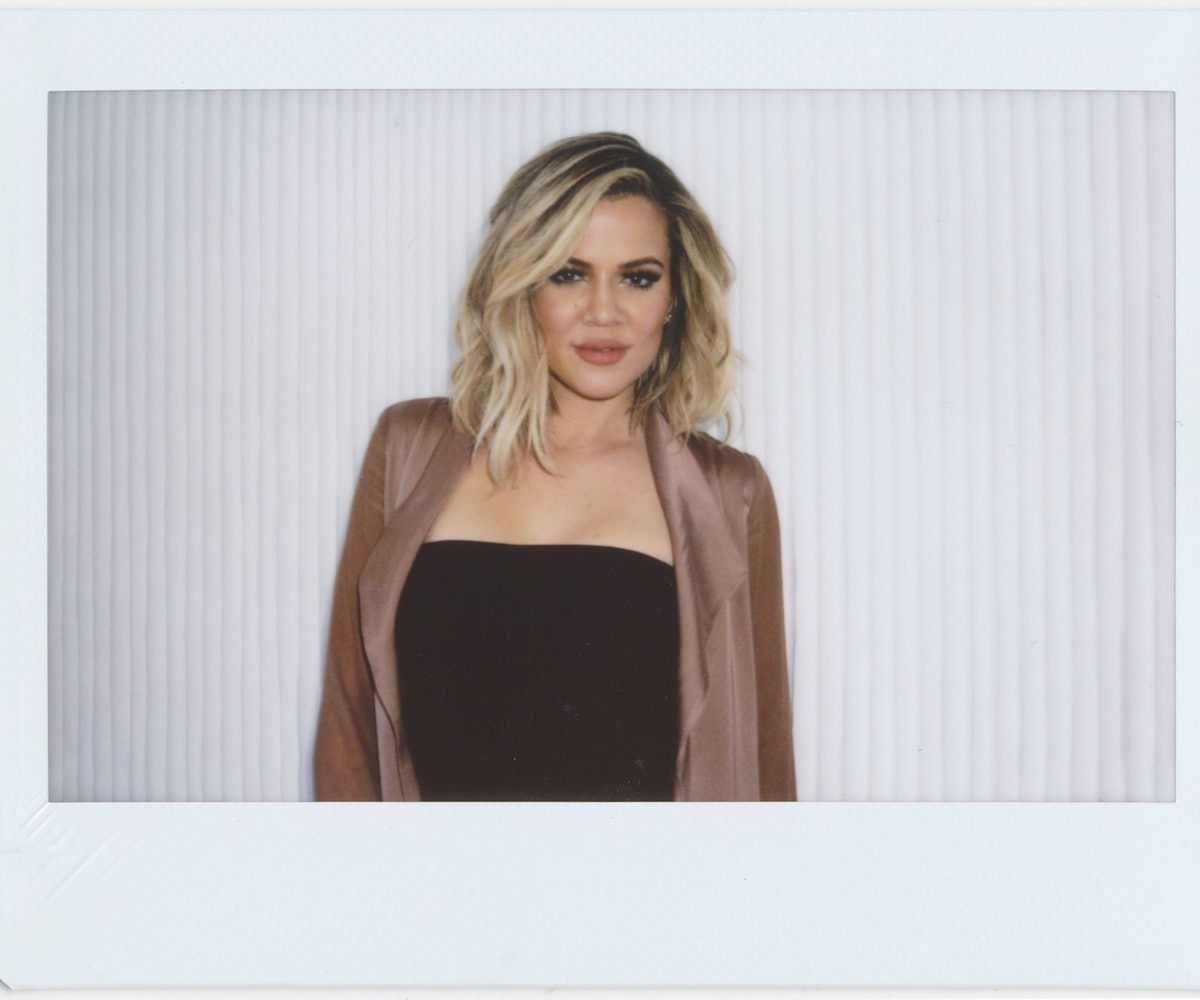 Khloé Kardashian sits down at a coke-covered table; she swears this is atypical of her. We laugh as she wipes the table clean of the soda spill (what did you think we were talking about?) that took place prior. Immediately put at ease by her laid-back disposition, I almost forget that I’m sitting with one of the media’s most polarizing and recognized figures. Little did I know that in the conversation that would follow, we would discuss her rapidly shrinking camel toe named Kamille, the reason why she empathizes with Amanda Bynes, and everything she has learned from America’s favorite drag queen RuPaul. What's certainly worth talking about the most, though, is how this Keeping Up with the Kardashians star,  who by the age of 31 is a New York Times best-selling author and host of a record-breaking talk show, still finds time to post a lower-ab gym selfie garnering over a million likes on Instagram (we have our priorities after all!).

We caught (or shall we say kaught?) up with Khloé amidst a busy day of the Allergan Live Chin Up campaign kickoff, an initiative that’s designed to encourage people to not let the tough things in life bother them and get in their way. Upon arriving, we were greeted by photographer Peter Hurley who instantly taught us a lesson in proper selfie etiquette—something Khloé has obviously perfected—before we sat down with the Dash doll for a candid interview.

Learn how New York Fashion Week's favorite Kardashian stays positive and thrives in the face of adversity in the interview after the break.

Let’s start out with why you’re excited to be here today with Allergan Live Chin Up campaign.Well, I really love what the Chin Up campaign embodies. It’s a philosophy that I live by. I am all for, “Let’s fix what we can about ourselves, but also, let’s not let the things that are technically negatives get you down.” Don’t bring me a problem. Bring me a solution. We’re all going to have fucking problems to figure out. But let’s do things for ourselves. Like, when I lost weight and went on my fitness journey, it was for me. It wasn’t about somebody else. I’d been told I’d been fat my entire life and I could’ve succumbed to plastic surgery or just really bad diets that are unhealthy for you, but I decided to make a lifestyle change and do things for myself and when I was ready.

I read your book [Strong Looks Better Naked], and in talking to you now, I’m reminded of the quote “Live your life, not your story.” Mmhmm

How did you learn how to embody your truth and work through that experience?It’s weird because I don’t. People always say, “Where does your strength come from?” And I don’t necessarily have a concrete answer. I think strength is built over time. I believe in God, and I think every trial and tribulation I was put into, it’s because I can sustain. I can handle it, and I will be able. I’m like, I know I have to get out of here somehow. I just would rather smile than cry. I’m that type of person. I want to live my truth. For example, like social media, whatever scale you’re on big or small, people will write whatever they want about you, but you can’t let someone’s perception of you define who you are. I love when people are like “Wow I’m so surprised by you” or like “You are really not what I expected.” Like, okay that’s kind of a backhanded compliment but I would rather people appreciate the human being they’re meeting rather than the character or the facade that they think that they know.

As you start to meet people who have this character or this huge image around them, you forget that they are real people, and I think that’s why people are so quick to say whatever they may.It’s still me on Keeping Up [with the Kardashians], but it's 44 minutes of who I am, combined with my sisters’ stories, and it’s not like people on Kocktails [with Khloé]—when they watch my talk show, they’re like, “Oh we see such a different layer of you.” I’m like, "Yeah because that’s still a little more me." But there’s still so much more. These 44-minute shows that you see once a week are not all who I am. I think that sometimes we let the social medias of the world or the TV programs kind of—it’s easy to let that define you. Don’t believe my story but believe who I am, who you see in front of you. And we’re allowed to change. We’re allowed to rewrite our stories.

What does your family dynamic look like when one of you is under fire at a certain moment? What is the conversation like within the family?Oh god, I don’t know how we would do it without our family. I see there’s a lot of celebrities and, you know, people say they’re having a breakdown and this or that. It’s like my sisters and I are on this journey together, so they understand when I—I call them champagne problems, cause they’re really not problems in the grand scheme of life, but they are problems we’re allowed to have. “Ugh, there’s so much paparazzi today” or whatever the fuck, whatever the issue is. No one else could understand what you’re going through.

Like the Britney Spears’ of the world who that’s—well she had a sister but—like Amanda Bynes, who was one person, like that’s really hard, that amount of pressure and just scrutiny on one person where no one else really understands their journey. So, I’m always very grateful that me and my sisters, we are on the same journey cause we just get each other. I think without them, I would probably go crazy and who knows, just run away. We’re incredibly honest with one another. Also, if one of us is maybe too full of ourselves that day, that’s what your family’s for: to bring you back down and to burst that bubble for you.

Ok, so to come back from that, what are three things you do to keep your skin so beautiful?Thank you! [laughs] Thank you! Well, I drink a ton of water, um, besides my Coke. I normally don’t drink Coke but I need some sugar right now. I wear sunscreen religiously and I sleep with oil—I am like lubed up to the nines when I sleep.

Oil Queen.Yes, The. Oil. Queen. I sleep in it, and then in the day I don’t want any oil on my face, so, I’m confused.

So, what’s the best beauty advice you’ve gotten from a drag queen, and was she RuPaul? Hmmm, [laughs] well, I actually got great advice from RuPaul, but she didn’t give it to me. It’s from me watching [her]. So, I’ve done her show a few times, which I love. Once she’s all made up and, like, her lighting’s there, she literally won’t move. She’s like, “I know where my lighting is.” And when you talk to her, she, like, won’t look at you [laughs] but not to be rude, because she’s like, “This is my lighting.” And she’s like, “No matter what, a camera’s there”. Oh, she is on.

I was watching, so I would talk like this too, [motions at a set facial angle] and never move my neck, cause I was like, well she’s doing that. And she has that. I just love—she knows her lighting. Definitely taught me lighting and angles.

So your Instagram might have a little bit of creative direction by RuPaul!That’s what it should say, [laughs] yes.

So what’s the most embarrassing thing you’ve done in a workout class or that’s happened to you [in one]?I actually, so, one time, I have a camel toe problem—Kamille, [laughs] Kamille with a K. Now that I’ve lost weight, I swear my puss has lost weight too, which I did not know was an option but thank god. So she doesn’t care to be seen much these days but at the time she was a problem.

So you just owned her? At the gym?Oh, very much so. And my sister Kourtney did not appreciate that. So she bought me these things, they’re almost like a maxi pad. I don’t know what they’re really called, but it’s to hide your camel toe. And it was like falling out of my pants, and it was like slipping. I was so uncomfortable I had to run. There’s this trampoline workout place called like, Sky High in L.A. We were doing this workout and I was like this is the worst time to be wearing this thing while I’m jumping up and down. So I had to remove it. I just said, “Kamille’s here. She’s at the class too. Get over it.”

So, what do you think of Kanye [West]’s tweets currently? I don’t know, what happened today? If there’s something…

Not specifically today.Okay, I was like “I don’t know.” Kanye is the true form of an artist. And I think his art demands creativity. I love what he says. I just love his honesty and his just ability to really say whatever he wants and [he] kind of has no remorse. I hate when people tweet things and then they like delete it.  I don’t like deleters. Whatever you say, own it! Is he like wild and out there? Yeah, but I respect him for that. I like anybody who owns who they are. And, just like no qualms about it. That’s what I love.

And Kris shares the same sentiment?My mom? I think so. I don’t know. I would ask her. I’m sure she’s probably like “Ugh, what the fuck’s going on?” I’m sure she’d say the same thing about all of us like, “Shut the fuck up.”