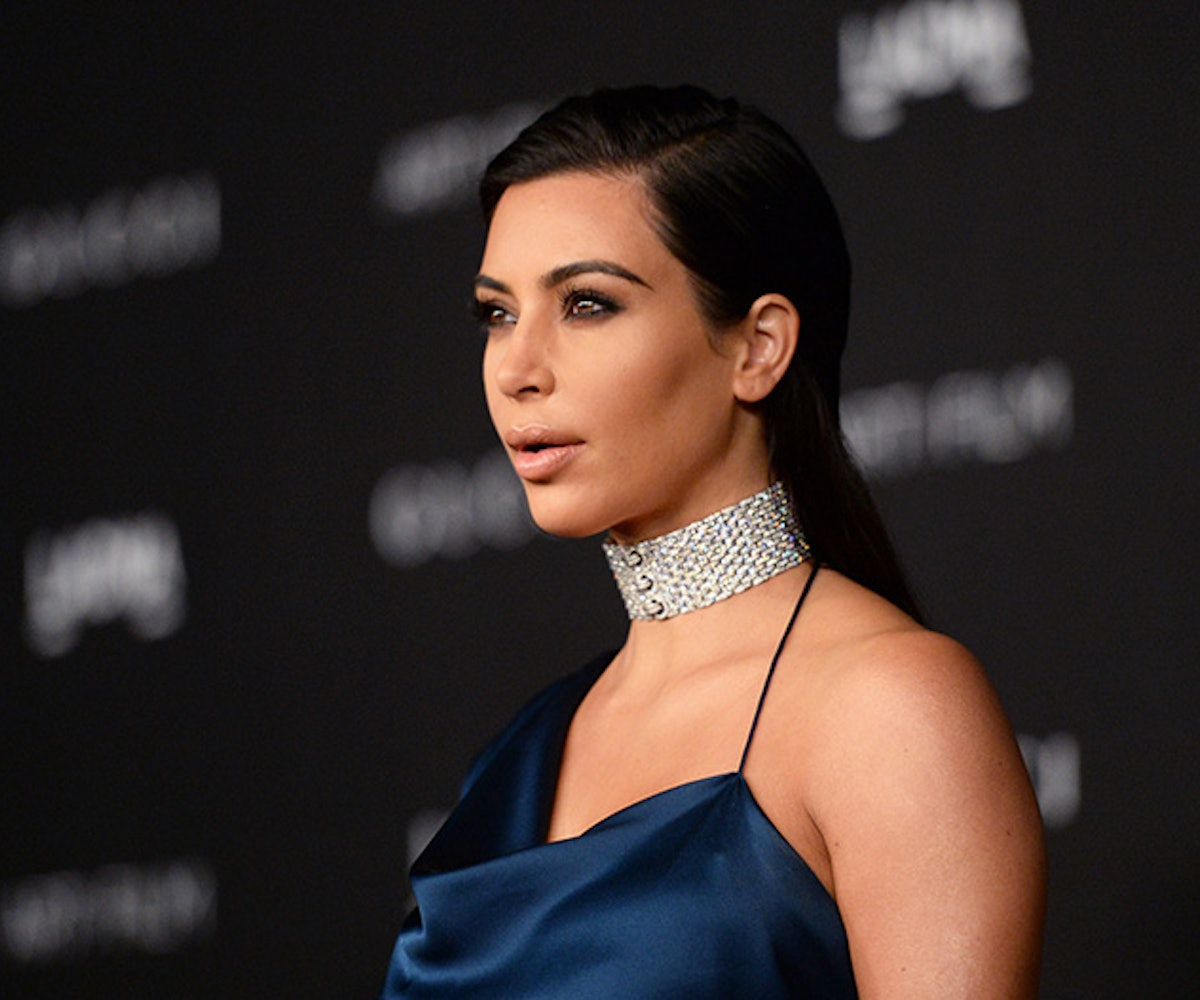 A year ago, you would be hard pressed to find a writer or critic praising Kim Kardashian West. Her (and her family’s) celebrity was too vapid, too much of a punchline for those “serious writers” to take, well, seriously. That has all changed.

Now, she’s attracting Beatles-levels of mania. Her coffeetable book of selfies, appropriately titled Selfish and published by the highly respected Rizzoli, has been heralded as a "masterpiece." She hasn’t changed, but the pulse of the media sure has. There isn’t one surefire point in the zeitgeist that marks the cultural shift, but more and more long reads from respected news publications are siding with the reality star. Based on online commenters and feedback, the general public still has a long way to go before they, too, give in to Kardashian West and call her the “Andy Warhol of our time.”  But perhaps the following eight long-reads will bring some perspective to ye doubters out there, because Kardashian West isn’t going anywhere. Whether you want to admit it or not, you’re going to have an opinion of her. You might as well make it an informed one, rather than a surface-level judgement shared by so many people.

"You Win, Kim Kardashian" by Megan GarberGarber's review of Kardashian West's book of selfies praises the media figurehead as a living, breathing piece of work. Ever since the first episode of Keeping Up With The Kardashians, people have wondered just what the heck she does that makes her famous. It's taken this long — perhaps her book is the nail in the answer's coffin — for us to realize Kim's job is looking good, being "glam," and living the princess story so many of us yearned for in fictional fairy tales.Standout Quote: "The selfies compiled in her book may be harbingers of arrogance, or of insecurity, or of some combination of the two; what they also are, however, is evidence of an insistent materialism, of the conviction that one’s 'look' is not a fleeting thing, but rather a thing that can be made into media. (Bedroom selfies: 'Right before bed but you know your makeup looks good so you have to take a pic.') This is industrial production, applied to one’s appearance. Kim is inventing, in her way, a new strain of capitalism. Its currency is the selfie."

"How And Why We Started Taking Kim Kardashian Seriously (And What She Teaches Us About The State Of Criticism)" by Jerry Saltz and David Wallace-WellsCritic Jerry Saltz and David Wallace-Wells engage in a dynamic back-and-forth concerning the myth, the woman, the legend of Kim Kardashian. They debate her importance in the art world — even wondering whether she's a modern day Warhol. It's a positive academic dissertation that doesn't necessarily call her the be all, end all of whatever she stands for, but certainly adds thoughtful fodder to the tipping point of Kim K acceptance.Standout Quote: "I would say, however, that the [selfie] form is going through further permutations, brought on by new tools, technology, selfie sticks, different lenses and filters, etc., so that the form will not die but become so ubiquitous that it will become an invisible genre, like a landscape or a rhyme. Something we do because the body likes doing it. Forgetful or not, Kim is a first adapter and partial inventor of a genre."

"Self-Publishing" by Laura BennettSlate's Senior Editor praises the banality of Kardashian West's book of selfies. She goes as far to call it a "masterpiece." It's a fearless opinion piece that raises the reality star on a shiny pedestal as the mirror to a self-possessed generation's need for self-branding and representation. Standout Quote: "Unlike the many other gussied-up ingénues who rose through the ranks of reality TV, Kim Kardashian’s public image has always been a uniquely nimble balancing act. She manages to project a whole mess of seemingly incompatible traits: Wholesome (family values) and scandalous (sex tapes), self-aware (jokes about her own materialism) and oblivious (carrying a Hermès bag painted by her one-year-old child), highbrow (Vogue covers) and gauche (photo shoots of her butt)."

"Notes On 'Kim'" by Rachel SymeHow does Kim Kardashian West relate to Marie Antoinette and Versailles? Rachel Syme explores her decadence and cultural importance in a bold essay.Standout Quote: "The tweens know her from her app and the tabloids, the sentient masses know her from nine seasons on the E! network; musicheads know her as Ye’s muse (for better or worse); the fashion and art worlds know her as an undeniable tool of commerce; your grouchy uncle probably knows her as being famous for having seemingly done very little besides release a sex tape and swan around and therefore as some kind of vague representation of the decline of the West and the rise of the dominant mediocre. What’s important is this: They all know who she is."

"In Defense Of Kim Kardashian (And Her Vogue Cover)" by NinjaCateNinjaCate knows that Kardashian West does not need anyone to defend her, but she still wrote an article in her defense because, well, too many people have gotten upset over their own inability to stop consuming whatever it is her name is attached to. It's an article that speaks to the reader in an attempt to help them accept that Kardashian West has, indeed, got us by the neck. That is something that deserves to be respected. Standout Quote: "Love her or hate her, the woman is a business genius and merchandizing superstar who made her fortune on her own steam. She created a brand almost literally out of nothingness. She is a pop-culture icon. She has commanded the public's attention far longer than anyone thought possible, all on the strength of a 'lowly reality show.'"

"No Filter: An Afternoon With Kim Kardashian" by Amanda FortiniIt's pretty safe to assume most people know this article only for the photos that strove to "break the Internet," but the article attached was pretty fascinating. Now with annotated notes from PAPER's Editorial Director, Mickey Boardman, and Chief Creative Officer, Drew Elliott, readers can get a 360-degree look into the making of one of the most talked-about covers of late. Kardashian West candidly chats about the business of being Kim. It's fascinatingly frightening. Standout Quote: "'I couldn't really pick out our pumpkins, and [North] couldn't really enjoy it,' she says. After a moment, perhaps concerned that she has come perilously close to complaining about her fame, she adds matter-of-factly: 'You just have to not care. You just have to say, 'This is our life, and it is what it is.'"

"Hear Me Out: I Secretly Love Kim Kardashian" by Phillip PicardiThough more focused on Kardashian West's influence on beauty and her telling idolization of Elizabeth Taylor, Picardi's essay praises the media maven as a woman that's always on. Like the PAPER article mentions, it takes a lot to be Kim Kardashian West; this essay takes it one step further and explains why that's important.Standout Quote: "Oddly enough, I think there's something approachable about the fact that Kim is so manufactured. It goes hand-in-hand with her 'everyone can be famous' storyline: We know it takes a lot of work to look like her, so when we see her looking perfect, we chalk it up to 'the makeup' or 'the hair.' But, that doesn't stop us from wanting in on it: In fact, it makes us think we can actually have it."

"Kim Kardashian West: The First Lady of Fame" by Martha StewartKim Kardashian West landed on TIME's 2015 list of the 100 Most Influential People with a short blurb by lifestyle guru Martha Stewart. It's an odd pairing, but in Stewart's questioning, we come to see the multifaceted entity that is Kim Kardashian West. Love her or hate her, she is, for what it's worth, a good thing.Standout Quote: "Beautiful in an exotic, totally exaggerated way, Kim exudes energy, sexuality, drama, determination, impetuousness, and happiness. "