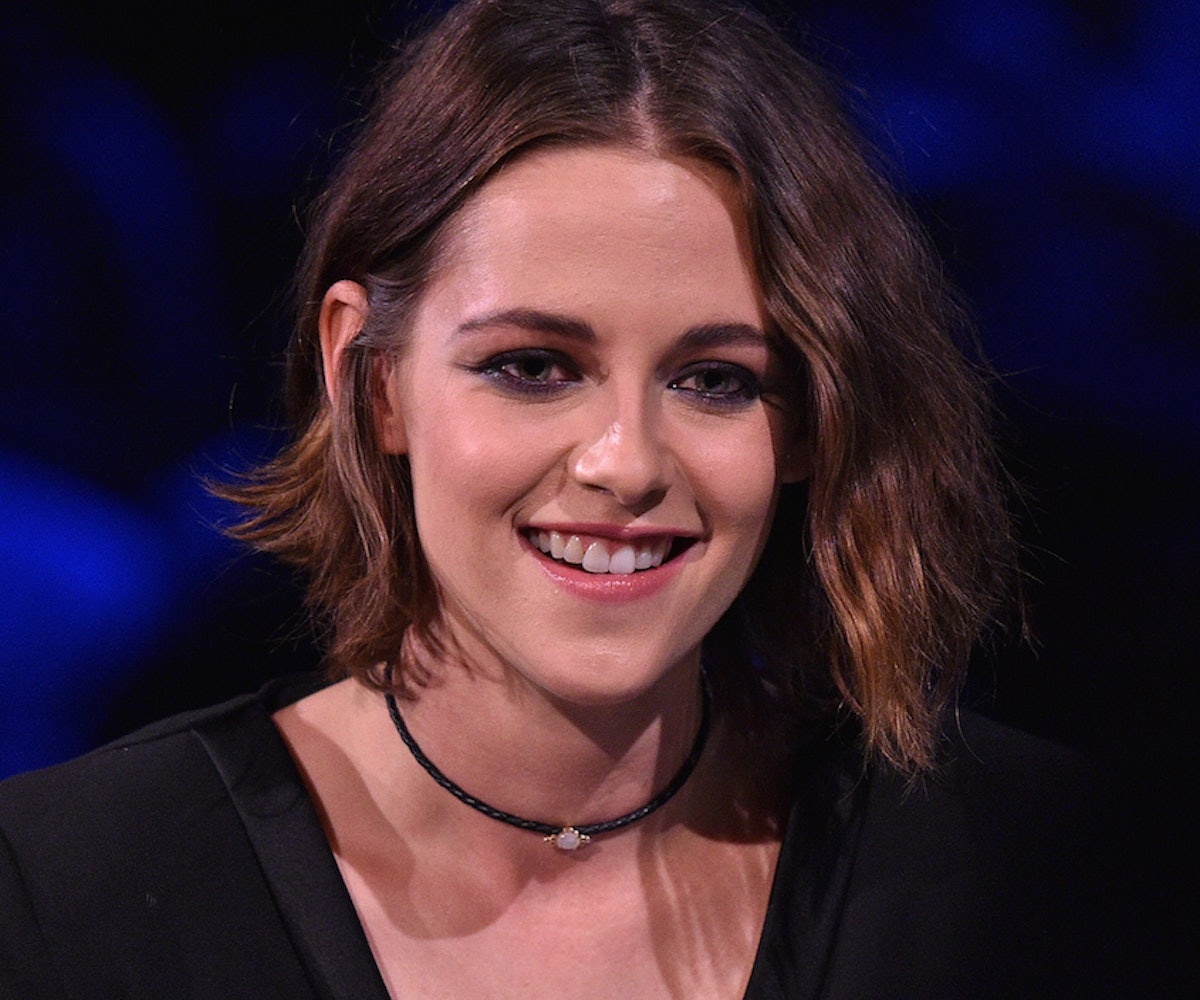 Little-known facts about Kristen Stewart: She smiles a lot, despite how she looks on magazine covers, and she's actually pretty freaking hilarious. Not the laugh-out-loud kind of funny, but that awkward, one-liners-muttered-under-the-breath brand of humor that makes her that much more charming. Perhaps it's because of all the RBF in photos and the general badassery she exudes, but people seem to forget that Stewart actually has a sense of humor, and she uses it. Often.

Click through to see all the moments Kristen Stewart showed us that she's actually a hilarious person.

When Kristen Stewart appeared in Jenny Lewis' awesome music video for "One Of The Guys," clad head to toe in an Adidas tracksuit and a fake mustache, we didn't think it would get much better. And then she started dancing.

People sometimes complain about Stewart's awkwardness during interviews, but in Car Conversations with Suzie Riemer, she is visibly more relaxed, and the humor flows out subtly and effortlessly.

Kristen Stewart and Jesse Eisenberg's recent sketch for Funny Or Die received a lot of attention for addressing the sexist double standards in interviewing male and female celebrities. Stewart's knowing smirk as Eisenberg grows increasingly uncomfortable with the questions ("Do you have a favorite boob?") is possibly the best part of the entire thing.

Back in the day, Kristen Stewart won an MTV Movie Award for Best Female Actress in Twilight. And everything seemed to go pretty smoothly as Stewart ran through a list of people to thank—until the award did one of those elusive numbers where it stays in your hand long enough to make you believe you can catch it...before it tumbles to the ground.

Word Blurt allowed us to see a bit more deeply into the complex mind that is Kristen Stewart's. Because how else would we have learned Stewart associated "Lenny Kravitz" with "piercing" and "Tinder" with a big, fat "NO?"

In this BuzzFeed video, Kristen Stewart and Jesse Eisenberg promote American Ultra by talking all things weed. Naturally, it's hilarious.

In this episode of Unscripted, Kristen Stewart is joined by her co-stars from Snow White and the Huntsman, Charlize Theron and Chris Hemsworth, and all sorts of important truths come out. As Theron eloquently puts it, "Right before [Stewart] starts a take, she basically goes through this very peaceful mantra to get her going, which is basically: 'Fuck me! Fuck me! Fuck me!'"

She does smile a lot, you guys! Blame the RBF on magazine culture!

Conan and Stewart recount the time she won a César Award, the French equivalent of an Oscar. She is predictably shocked and nervous, and the added language barrier leads to this humorous exchange with the award announcer.

In this On Air With Ryan Seacrest interview, Ariana Grande interviews Kristen Stewart, and the questions are predictably sexist and boring (Grande is quick to point out that she was told to ask the questions and they are not her own). In the face of mundane questions like, "Which is your favorite outfit and which is your least favorite outfit?" and "Which celebrity breakup affected your the most?" Stewart's good-natured sarcasm makes the entire ordeal much less cringeworthy.

NEXT UP
Entertainment
Molly Burch's New Christmas Songs Are Standouts Amid The Fluff
Sale
These Cyber Monday Deals On Amazon Are SO Freaking Cheap
Life
NYLON Daily Newsletter: November 25, 2022
Astrology
Your December 2022 Horoscope Fuels The Reboot