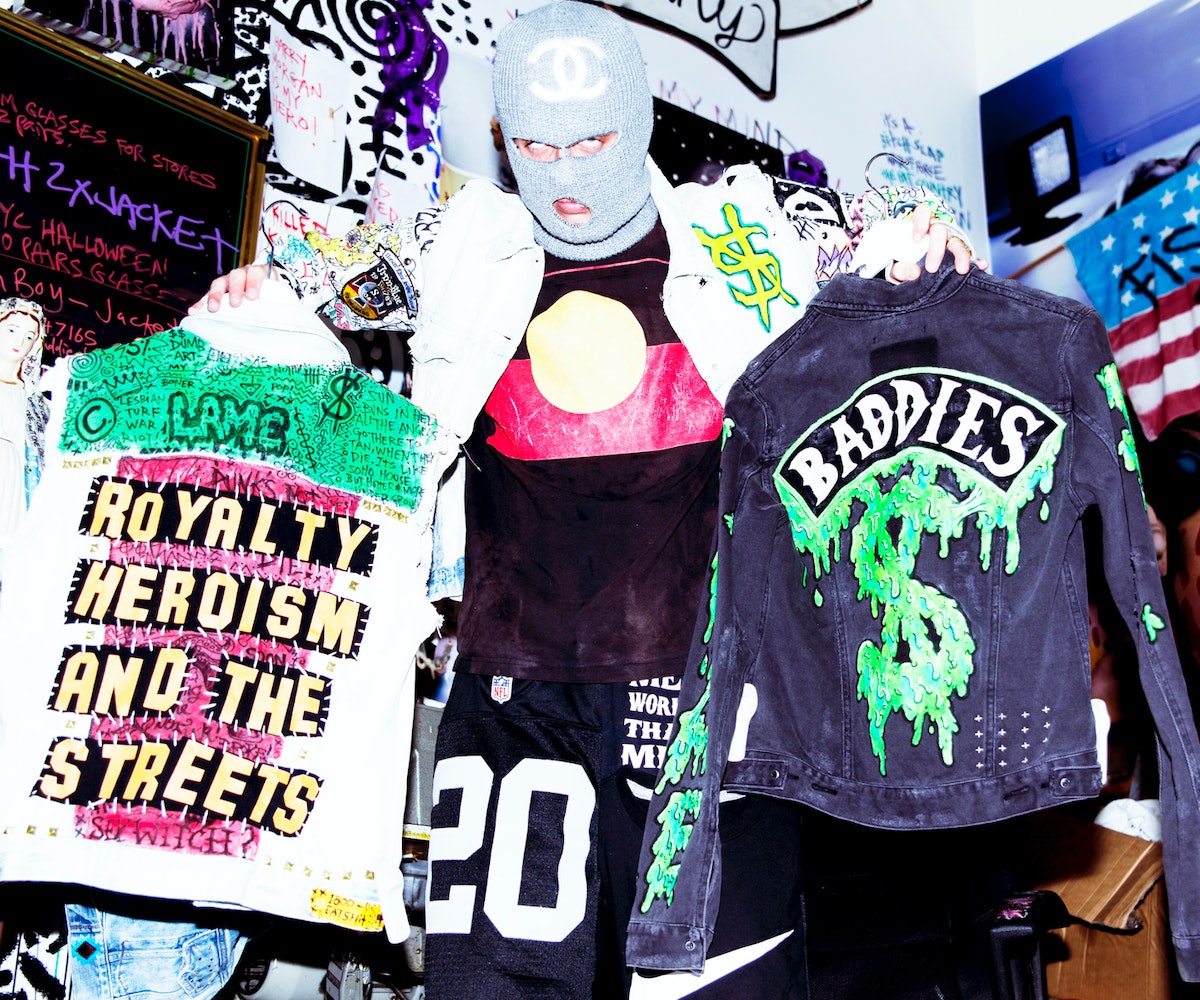 You know we've been celebrating all the awesome denim out there this month in honor of our Denim Issue, so as the month comes to a close we've decided to go out with a bang. We're talking about an exclusive peek inside the studio of Ksubi Kustom, the made-to-measure branch of Aussie denim empire Ksubi.

Run by Pauly Bonomelli, the sub-brand is about the raddest, baddest denim we've ever seen. From jackets with tongues and eyes of Horus to neon green slime shorts, his customizations are absurdly cool. Just as cool is the space he makes them in: a studio in the back of Ksubi's Paddington store covered in drawings, graffiti, and weird found objects.

We enlisted photographer Byron Spencer to go capture the Ksubi Kustom madness for us while we asked Bonomelli exactly how he makes his designs so rad. We think it has a lot to do with the Enya playlist he's listening to because that lady is weird.

What was the impetus for Ksubi to start doing custom?

To bring back life.

How long have you been working with making custom products?

What's you background in design? How did you get connected to the guys at Ksubi?

I studied for four years, came to Sydney, and have worked here since for a couple of different labels. I met them all after a mate passed my name on to the art department when I returned from jail.

What's the craziest custom piece you've ever made?

Probably my diamond bunny gimp for Hong Kong department store I.T'.s anniversary gift. Check the video if you can find it on the interwebs. That was heaps of fun.

If someone isn't sure about what sort of customizations they want, what would you recommend?

What are some of your signature embellishments? And your favorite kind of piece to work on?

Since the interwebs took over signatures dont really exist I don't reckon. Favorite thing to work on is a vest.

Apples Ryan-Russo, she has the best style. Actually her whole family does; Robbie, Chiiko, Frankie Magic. They are ruling.

How would you recommend someone wear their ksubi kustom piece?

What's one thing you'd never do to a Ksubi Kustom piece?

What's your most worn pair of jeans?

Weirdly enough, I pretty much only wear shorts or trackies.

What's on the playlist you listen to while you customize?