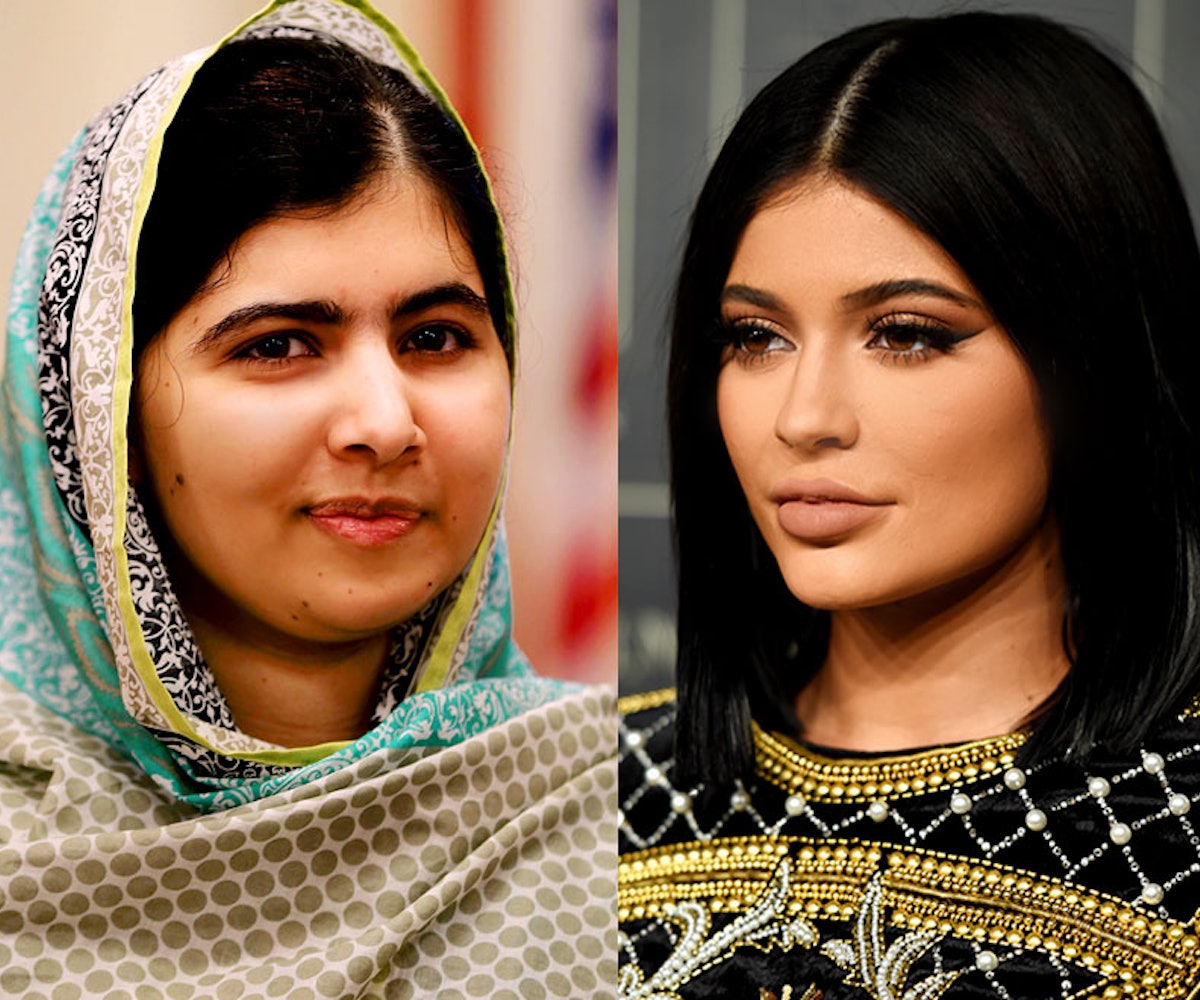 A few months ago, on Malala Yousafzai's 18th birthday, thousands of people reached for their smartphone to post about the event. But instead of celebrating Yousafzai's achievements, or spreading her message, many used the occasion to point out what they thought was wrong with the media and general media-consuming public. With a split-screen photo of Yousafzai and Kylie Jenner, and a caption that criticized the way that Jenner celebrated her adulthood, they not only managed to put down a young woman, but also remove focus from the Nobel Peace Prize winner's mission and shroud it in negativity.

Since these comparisons went semi-viral, people have clung onto them and recycled these ideas. And, then, in the month since both were named some of TIME's Most Influential Teens of 2015, the fanaticism behind these ideas has increased tenfold. Now, in addition to the hundreds of thousands of criticisms about her appearance and general being, for every Kylie Jenner-related post—whether it be by the media, or on the reality-TV star's social-media channels—there are comments about how she's not deserving of the position she was born into because she hasn't done as much as one of the greatest humanitarians of our day and age.

It's true that Kylie Jenner gets more press time than Malala. And, indeed, she does receive monetary opportunities than Malala. While some may not find these to be the most encouraging facts, they exist because people are interested in everything that Kylie does. The society at large, for better or worse, is irrefutably invested in how she looks, everything she listens to, says, and doesn't say, everywhere she goes, and who she's hanging out with (or not hanging out with). We follow her on social platforms, and wait as dozens of paparazzi trail her every move for one unflattering shot. (I have witnessed this firsthand, and Kylie's quick 20-foot walk from Apple's Soho store to her massive black van was treated similarly to the Pope's arrival in the U.S.) We speculate on her relationships, whether or not she has had cosmetic work done, and whether she's a "role model." We're waiting for her to surprise us, to fail, to make the mistakes that every teenager makes, and to be exactly who we think she is.

We don't do any of this for Malala. Instead, we sit back and actually listen to her story and ideas, support her beliefs, and join her cause. As we should; she's managed to make a difference in our social and political landscape, and from our first introduction to her, she has astounded the world with her soft-spoken vision and admirable commitment to change. We're right to look up to Malala and strive to be like her, but it's not right to use her as a benchmark for others. Malala is phenomenal. She is literally a phenomenon.

The Nature vs. Nurture debate is one of the most longstanding discourses in the history of psychology and sociology. And while there still isn't an answer as to exactly how much of a person's being and characteristics are influenced by their upbringing, there's no doubting that a person's environment determines a lot of their behaviors and actions.

Malala and Kylie have two immensely different upbringings—one of hardship, and one of privilege. They were raised in different classes, in different parts of the world, and they are of different races. Aside from their age, they probably couldn't be further apart from each other, and comparing them does both of them, and women everywhere, a disservice in which we are reduced to how many years we have lived on this planet. Kylie has built off the Kardashian/Jenner brand, and has fostered a career by directly interfacing with her image and privilege in a way that some find admirable, and others find repulsive. Malala, on the other hand, has used her vastly different experience to become a voice of change.

In short: Kylie does have the platform to promote larger issues and try to incite change (and has tried with her #IAmMoreThan social-media campaign) but she is not labeled a humanitarian, but most importantly, she has never tried to label herself as one. In the same respect, Malala has not tried to monetarily profit off her experience; she has written a memoir and created a documentary, but only to spread her message. They are not trying to be the other—they inherently cannot, nor should they be.

Yes, on her 18th birthday, Malala traveled to a Syrian refugee camp in Lebanon and opened a school. Kylie threw a very expensive party with her friends and was gifted a very expensive luxury car. Both events fall in line with what we would have expected them to do.