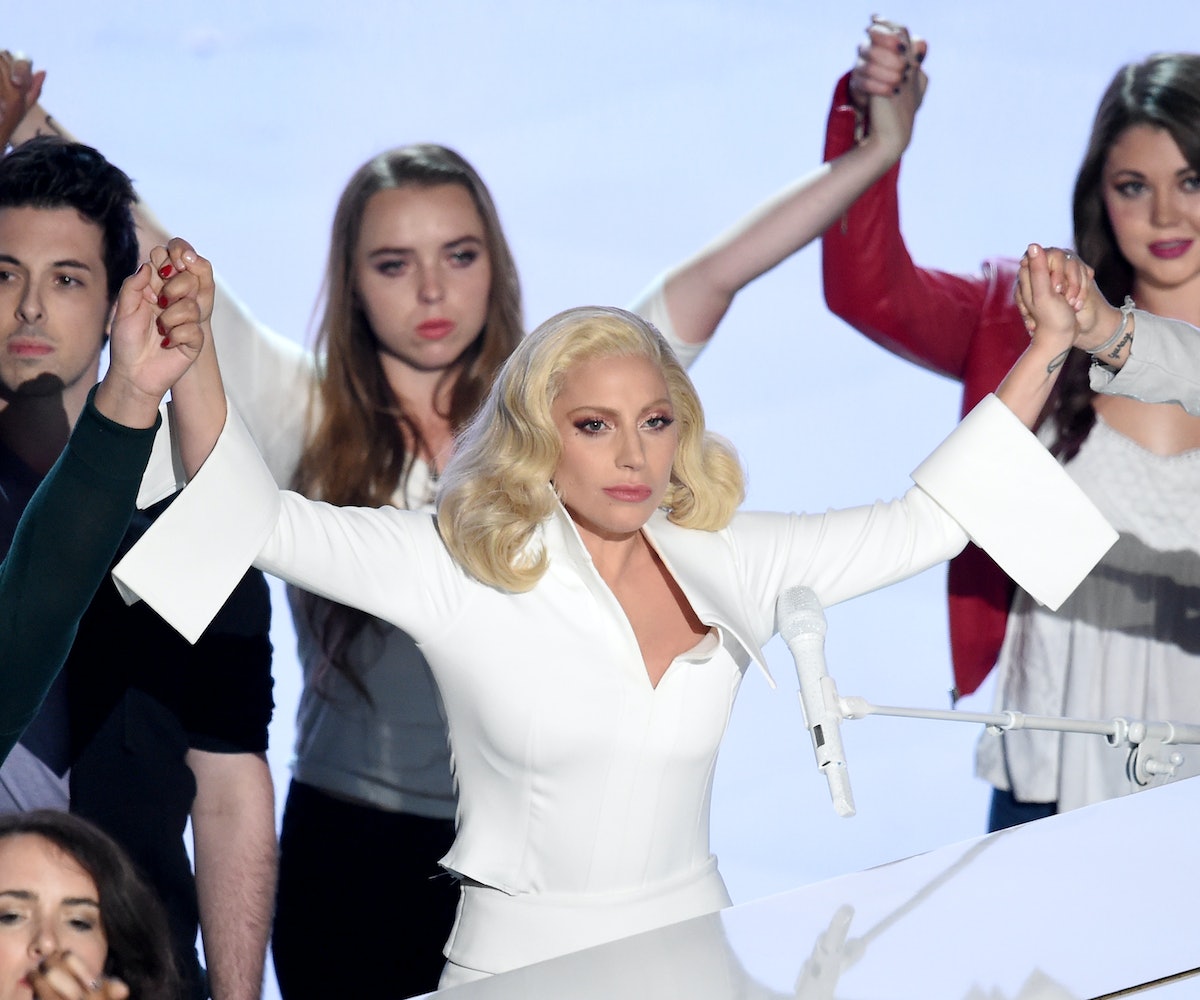 There wasn't a dry eye in the house Sunday, when Lady Gaga took the Oscar stage to perform "Til It Happens to You," the harrowing empowerment anthem from The Hunting Ground, a documentary about the sexual assault epidemic in America. The crowd, especially, lost it when 50 victims of sexual assault walked on stage with words like "Survivor" and "You are Love" scrawled across their arms.

In an Instagram post on Tuesday, Lady Gaga revealed just how challenging it was for her to get to that moment. Underneath the photo, taken on the first day of rehearsals, in which Gaga poses with two survivors, the singer details how emotionally leveled she was leading up to the performance.

"The first day of rehearsal with all the survivors I could barely get myself together," she wrote. "My body was wrecked with inflammation and pain, crying and shaking the whole walk to the stage. The whole night before I did not sleep. The fear of knowing I would finally face that I belonged in that group." Gaga is, of course, referring to the fact that she too is a victim of sexual assault, something she only recently began discussing publicly.

"I told them I was so sorry I couldn't be Lady Gaga for them, that I couldn't even get dressed," she continued. "I could barely get through the song, couldn't hit any of the high notes. Hair wet, sloppy tee shirt jeans uggs, tissues. They all hugged me and told me that it was okay because it was more real this way, that they understood that they were in pain too. They told me they were there for me to support me because they believed this message needed to be heard. Without them, I never could have felt strong. They accepted me for me, at my lowest and that was good enough for them, so somehow through the magic of their courage they made it good enough for me too."

Gaga's performance continues to resonate with women everywhere. After Kesha publicly thanked her friend for her message of strength, Jamie King also came forward and admitted that she too was a victim of sexual assault. "Now I am free, somewhat,” King wrote on Instagram. “Thank you for the switch that went off inside finally when I realized my silence said I cannot help nor change and that is not who I am.”

NEXT UP
Culture
The Madonna Biopic Is Being Scrapped
Culture
Senators Quoted Taylor Swift During Ticketmaster’s Hearing
Culture
The 2023 Oscar Nominations Full List Is Here
Entertainment
Harry Styles' "As It Was" Grammy Performance Featured A Silver Tinsel Onesie
Style + Culture, delivered straight to your inbox.