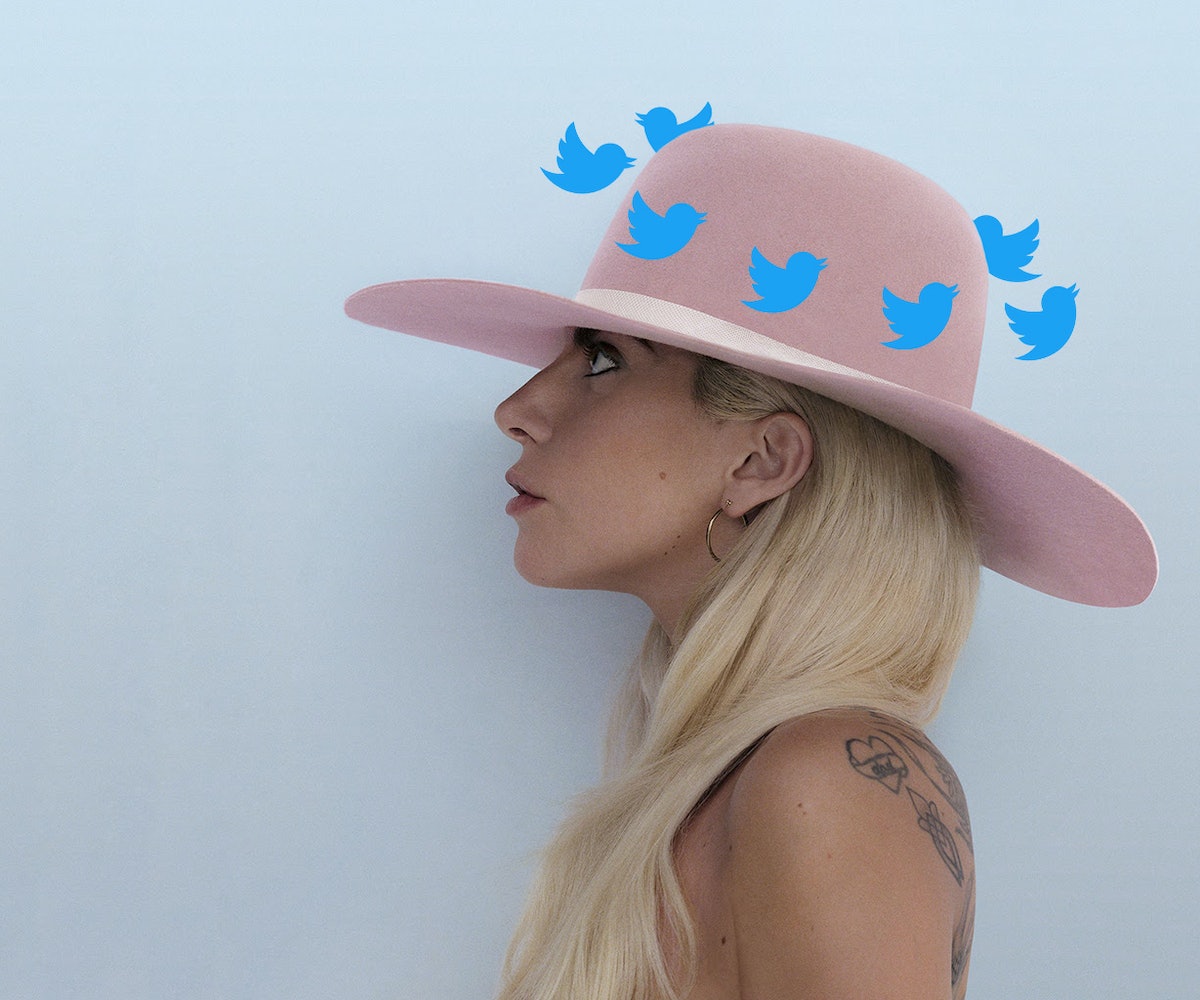 My relationship with Lady Gaga has been rocky, to say the least. I was a Little Monster before the term was invented, put my paws way up during the Born This Way era, and then became one of those jaded fans who rolled their eyes publicly at the mention of her but danced to "So Happy I Could Die" alone in my room. Whatever shame I had is pretty much gone now. Joanne is incredible, and, as a fan, I'm really proud of Lady Gaga. She spearheaded the idea of an all-inclusive fan base that thrives off of individuality and love. Some fans, however, are so much more than Little Monsters. They're stans, and their dedication to the celebrity they stan (i.e. obsess over) is remarkable.

One such stan is @perfectdeIusion. I don't remember how I first came across their Twitter account, but it has since become one of the most entertaining ones I follow. They've amassed a gigantic following—including Gaga herself. They always seem to know where she is, what she's doing, and, at times, why she's doing certain things. Celebrity and the culture around it are, at its heart, a bit of a joke, and stans like @perfectdelision make it fun. They go to humorous places most comedians won't because (1) Twitter and the humor that it inspires is still very niche and (2) the anonymity social media profiles provide mean the general public won't ever know who you are. They're the unsung tastemakers coining the phrases you'll read in some quasi-in-the-know publication thinking it's hip in a few months.

So to better understand stan culture, I spoke with @perfectdeIusion because speculating only gets you so far and their perfect illusion is endlessly fascinating.

How do you define stan culture?

Stan culture is when you're obsessed with a celebrity you love and whatever they do. You love their music, you support them in every way possible, etc.

Do you see being a stan as a negative, positive, or relatively neutral thing?

I think being a stan is positive, but there are a lot of negatives. Stan Twitter, for example, has a lot of negativity and angry people fighting over how much a celebrity sells on an album or a single and that's just dumb. Stans can attack you on Twitter just for having a different opinion on music or not liking a celebrity. Of course, I have made a lot of great friendships [through] this place, but if I could just quit it without leaving my friends, I would instantly.

Lady Gaga is a perfect example of a good role model. I love her with all my heart and her music just sticks with me. It has a weird connection that never let go.

Who else do you stan and why?

I really love Mariah Carey; if it wasn't for Gaga I would be a die-hard Lamb. But there are a lot of other celebrities that I love, like Katy Perry, Lana Del Rey, Madonna, and some others.

Has Lady Gaga ever interacted with your tweets?

Lady Gaga hasn't interacted with me, but she does follow me on Twitter. She is very active and communicates a lot with her fans.

Some of the things you and other stan accounts tweet can be read as problematic or un-PC. What do you have to say to those folks who view them that way?

I say just get used to it. People can be vile in the real world; not everything should be based on what is politically correct and nice.

How ironic are you truly being when tweeting as @perfectdeIusion?

Irony is basically used in most of my tweets. I view myself as a troll, and while not many people would like that, it is my Twitter account and I have a freedom of doing whatever I want.

How many hours do you think you spend on social media? Does it distract you from what you do outside of it?

I spend most of my free time on social media, and I don't view that as a problem. It doesn't distract me from everyday activities. I just see Twitter as a way of burning time and having fun.

If you don't mind me asking, what do you do outside of stanning?

I write songs occasionally and sometimes play the piano. I spend most of my time listening to music.

As someone who greatly enjoys your sense of humor, I feel like you appreciate who an artist is but are also aware of the joke of celebrity. Like, you may be poking fun at them, but it's never done with true malicious intent—would you agree?