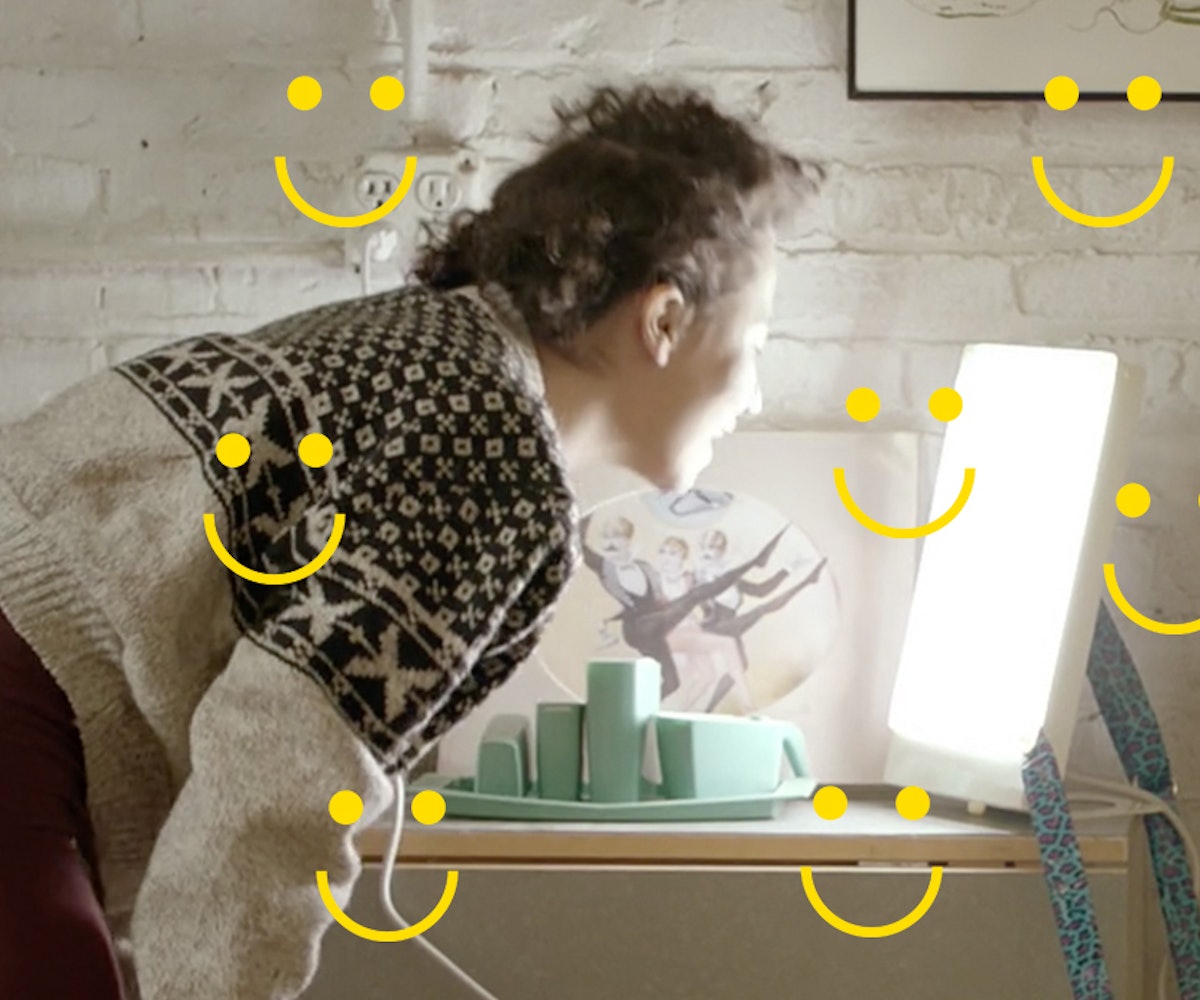 On a recent episode of Broad City—the genius show that is doing an excellent job tackling mental health—we learn that Ilana, our beloved foul-mouthed, high-spirited main character, suffers from SAD. As her BFF Abbi lists off the activities she plans on doing with her mom—frozen hot chocolate, visiting Santa at Macy’s, a fancy sushi dinner—Ilana is only half listening. “That’s a lot of stuff,” she says unenthusiastically. She slumps further down in her chair, then suddenly gets up from the table to prop herself in front of a bright light. “I’m back baby, I’m back!” she shouts. “Thank science for SAD lamps.” There’s the Ilana we know.

For the rest of the episode, Ilana’s mood continues to ebb and flow. She leans heavily on her SAD lamp—or her happy lamp, as Abbi dubs it—and instead of increasing her antidepressant medication, the artificial light becomes her new drug of choice. Depressed about how poorly she's being treated at work? She turns on the lamp. Realizes that life is trash? She ups the wattage. Hears that Abbi’s mom penetrated herself with a bottle of cough syrup to stave off her sexual frustration? Ups it even more. On her quest for serotonin bliss, Ilana eventually ends up shorting the power in the restaurant she works. The SAD lamp was supposed to make her happy; instead, it turned everything dark.

This isn’t exactly how the device works, of course. Broad City has a penchant for dramatizing (comedizing?!) things, but it did get a couple of things right. SAD lamps—also known as light therapy boxes—are typically used to help people suffering from seasonal depression in the fall and winter months. It mimics daylight and is meant to help your body soak in the UV rays that you would typically get from the sunlight—the thing we see less of once daylight savings time rolls around. “It's about as light as a spring morning if you're outside in full sun,” Kathryn Roecklein, a psychologist at the University of Pittsburgh, explains.

Now, it won’t give you instant results, but it’s definitely effective. Roecklein tells us that, according to studies, light therapy works on patients about 50 percent of the time (compared to antidepressants, which work 30 to 40 percent of the time). Patients have reported a more positive mood, increased energy, and a return to normal sleep patterns. Generally, you should use it in the morning, immediately upon awakening, and for about 30 to 45 minutes a day, say while reading or checking your email.

The time of day and allotted minutes could change though, depending on what your psychologist recommends—who, by the way, you should meet with before doing anything. They’ll be able to guide you better than anyone else. “A lot of people tell me, ‘I've tried light therapy, it doesn't work for me,’ and after investigating a little while, I find that they didn't really have any advice on how to get started in a way that was right for them,” Roecklein says. “Like taking an antidepressant medication, you wouldn't choose the medication and the dose on your own—that also would be illegal—but you would use a psychiatrist or an MD who has a lot more experience in how the medications work and can balance all of that out.” Just make sure you don’t overexpose yourself. Side effects are pretty mild (headaches mostly), but Roecklein mentions that if you suffer from mania at all, light therapy can act as a trigger.

Like Ilana learns (the hard way), for some, light therapy won’t be enough on its own and will be more effective when combined with other treatments, Dr. Joy Harden Bradford says. “I do think that you have to be careful and make sure that you're not relying just on light therapy if you have other depressive symptoms,” she says. “Say you were doing therapy, maybe you're also doing medication. That would be part of your treatment plan.” Again, this is when a licensed professional should be consulted.

Overall, though, light therapy is something you should know about—especially if you find yourself feeling more down than usual in the coming months. And remember, putting your mental health first shouldn’t be something you’re embarrassed about. The end goal should always be to get better. As Ilana explains: “I was trying to decrease to be, like, pure and strong or something, but that’s shame and stigma right there. So I get sick sometimes and need medicine, who cares?”