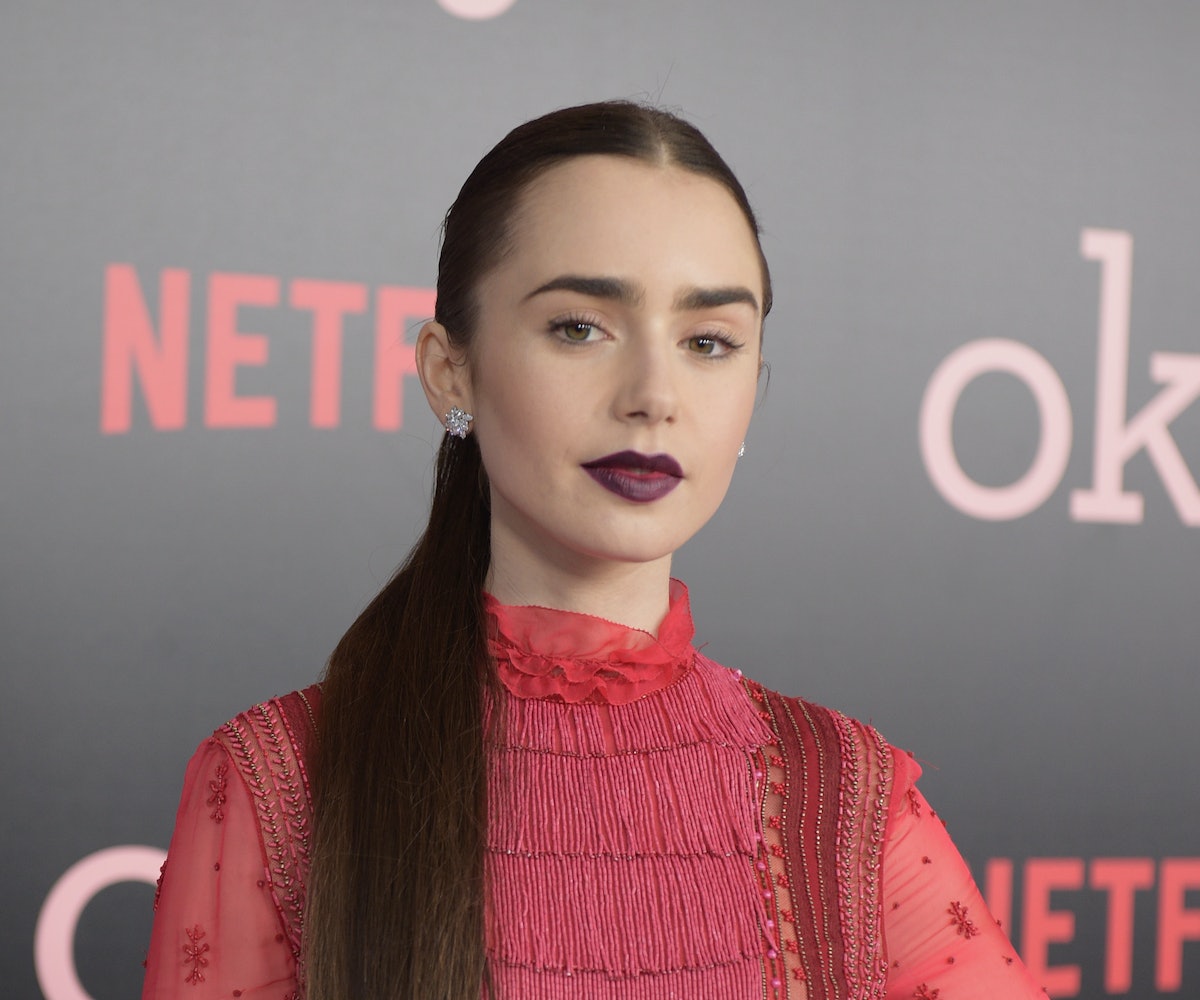 In the new adventure fantasy Okja, Lily Collins plays a member of the Animal Liberation Front, a hard-core activist group that will do just about anything to expose the greedy Mirando Corporation and its evil ways. Specifically, the corporation, headed by a divinely creepy Tilda Swinton as Lucy Mirando, has been harvesting so-called “super pigs” in hellish facilities with the end goal of selling their genetically modified meat to insatiable consumers. What they didn’t count on was Mija (Seo Hyun-Ahn), a South Korean girl who raised one of these super pigs herself—the titular Okja—and will stop at nothing to save her once Okja is taken to New York by the Mirando Corporation to meet her doom. The movie, which stirred up controversy at its Cannes premiere, on account of it being released directly to Netflix on June 28, is the latest from visionary South Korean director Bong Joon Ho and one of the reasons Collins signed on for the project.

The 28-year-old actress also relished playing an activist, as someone who has championed several causes in her personal life. Earlier this year, she released Unfiltered: No Shame, No Regrets, Just Me, a collection of essays that shed light on her struggles with body image, self-confidence, dating, and other issues that most actresses in her position usually keep private. Collins has been especially frank about her history with eating disorders, both in the book and while doing press for her upcoming movie To the Bone, in which she plays a young girl struggling with anorexia. We sat down with her recently to discuss playing opposite a giant CGI pig, her writing process, and embracing activism.

When did you first get to see Okja the pig in all her glory?

On set, we had a stuffy version of her, like a massive life-sized version. We had different actors playing the different body parts, so we had something to react to. But the first time that we saw her with all the CGI and everything was in Cannes.

How did the finished version match up to the vision you had in your head?

Just way more beautiful. I was so emotionally attached to the character in a way that you can't really imagine that you're going to be. I think she has so many different elements of different animals, and you just don't know fully know what that's going to look like until it's realized. You just have to have faith in the filmmakers.

This is obviously such a rare film in terms of both the quality and the tone. Is it as gratifying for you to be a supporting part of this film as it is to be a lead in another film?

Oh, 100 percent. I read this script and knew that the ALF members were all part of this big machine. Red is a character that comes into play in the story, but for me, to be a part of something this important and a story like this, it doesn't matter what size the character is. I get to work with Bong. That's enough as it is.

Even though this is a $65 million budget, it doesn’t feel like something a studio would normally make.

Exactly. It felt like an independent film being made, but you would look around and go, "We just shut a freeway down. We're in an underground mall with this pig—this is not normal." Netflix gave Bong free rein to do whatever he wanted. They were so gutsy in their belief in the story, and without them, it wouldn't have been made.

That's the weird catch-22 with Netflix. They give filmmaker’s like Bong the freedom and resources to realize their vision, but then you don’t get to see these amazing movies on the big screen. Does it at all bother you that most people won’t see Okja in a movie theater?

Bong has said, “I knew if it would look amazing on the big screen, it would look even more amazing on a small screen.” There are so many ways to consume media nowadays and so many ways [in which] a film is being brought to our attention, this just happens to be at the forefront of that conversation right now, and to be a part of the project that's sparking a lot of that is quite cool. I'll never not love going to the movie theater, but films like this and another film I have with Netflix, To the Bone, are both super interesting, with provocative subject matter that you almost need to see them over and over again to get something else from it. Every time I watched them, I'm like, "Oh my god, I didn't realize that before, or that line struck a different chord with me." To be able to watch it in the privacy of your own home over and over again with families, to spark conversation, it's important.

Your character is an animal activist, and I know that you've done your own activism, too. Do you seek out your causes or do you think they find you?

With my form of activism, it's been about body image, self-empowerment, anti-bullying. These are things I've been active and passionate about since I was in high school. I was a teen therapist in school, and part of this amazing program, where kids just vented to one another about things that were going on with them and pressures we were feeling. Those were the most common themes that kept coming up. I was never afraid to be a conduit through which other people could work out their experiences or stories, and so for me, activism was just this way of life. I feel like sometimes it can appear as though things that people speak out about have found them, and you can kind of tell when they're not as innately passionate about what they're talking about, but for me, it's always been such a huge part of my life. That's why when I decided to write the book, and then To the Bone happened, it really was the universe putting all this in motion at the same time. There was nothing strategic about it. It was just one of those beautiful moments when your life's mission or your life's purpose intertwines with your work.

You spoke about your history with eating disorders for the first time at Sundance when you premiered To the Bone. Is the film what inspired you to go public?

Well, I had my book deal already, and I was in the process of writing. I wrote my chapter on it a week before I got the script for To the Bone, ironically. When I was filming the movie, it informed my writing, and as I was writing when I was filming the movie, it informed my character. I knew that when it came time for this movie to come out, it would be impossible for me to talk about why I wanted to do the movie and why it's important without expressing my experiences with it. So I was already preparing myself for that, but then it beautifully coincided with the fact that I had just written about it in a more solid way and got to explain everything in my book. I became much more at peace with the way I was going to talk about it because I had lived with it on paper for so long.

It was so hard. I came up with the concept of the book and then got the book deal when I was not shooting anything. Then, as luck would have it, I booked a TV pilot and three movies back-to-back and kept my deadlines. Everyone was like, "Why don't you push it off? No one knows you're writing a book." I was like, "What am I going to do?" I used to write in Los Angeles in an office. I'd switch off the Wi-Fi on my computer, put my phone on silent, and just stream-of-consciousness write. But when I booked these movies—To the Bone shot in L.A., but the other two films shot all over—so time difference is wack anyway. I wrote my last chapter in Seoul while I was shooting this movie because it was such an isolating, foreign experience for me, which really emotionally opened me up to different places that I don't think I would've tapped into if I'd been in L.A.

I was waking up, going to the executive lounge upstairs where there was Wi-Fi, email chapters to my editor who was in New York, and I'd wake up to new edits, have to edit, then go to work and play this character. It was the most difficult thing I think I've ever done. But what kept propelling me forward was: It's going to be so worth it in the end because you're going to be able to say you did it all yourself and didn't have help with it other than my editor.

You studied broadcast journalism in college and wanted to be a reporter at one point. How do you consume your news today?

I try not to do the notifications thing because otherwise, I feel like it would just be blowing up with everything that's going on. I do try to stay as informed as I can. I'm not someone that checks my phone constantly for news.

I actually don't. I go on Twitter on occasion because I want to interact with people and I want to know what's going on, but I really enjoy talking to people and reading things myself and having informed conversations. Even if it's something I don't know about, I want to learn. So I like actually face-to-face conversation about things. I rely on social media for some stuff, but it's not where I get my core information from.