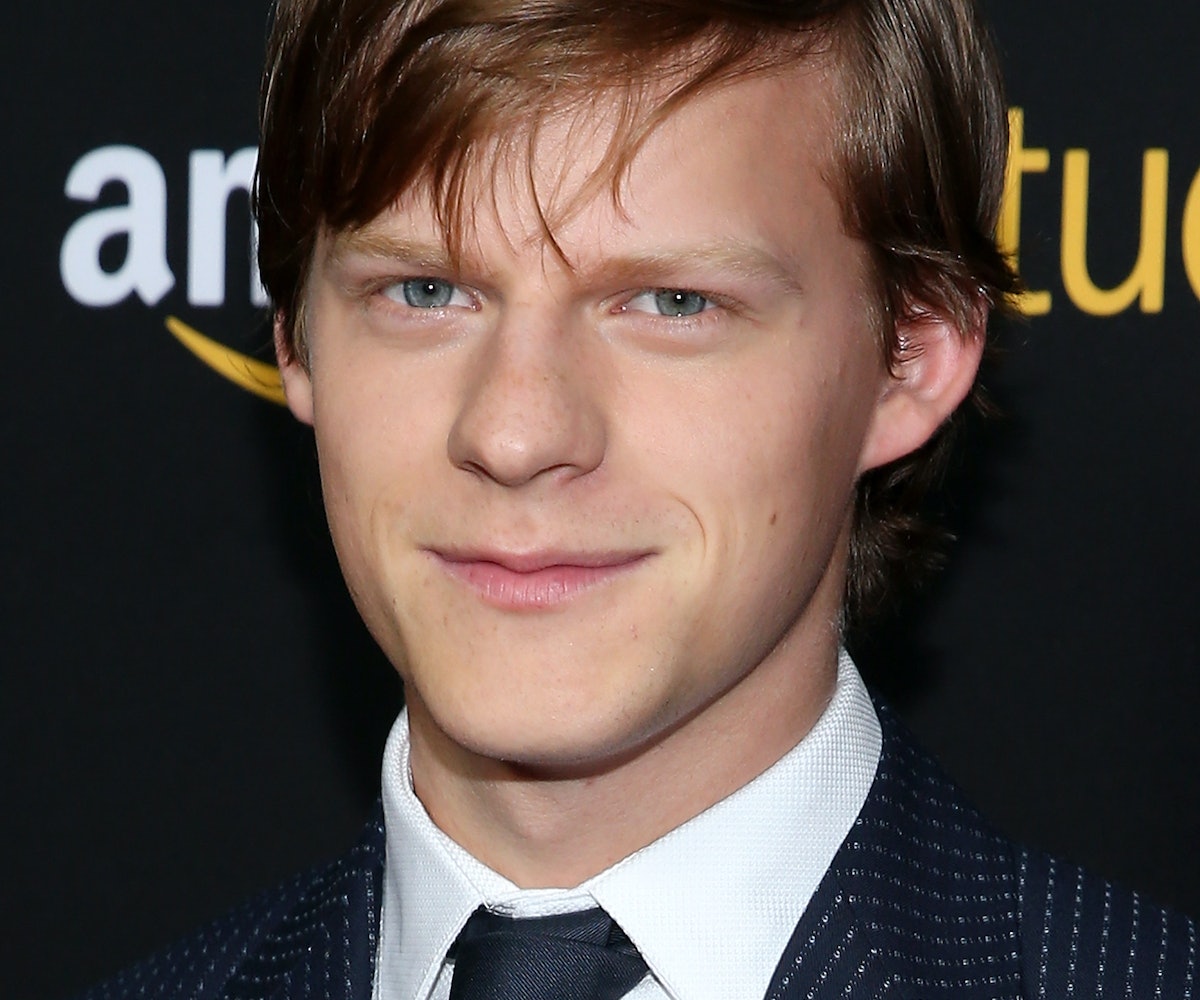 In Manchester by The Sea—the exquisite third feature from playwright-turned-auteur Kenneth Lonergan—Lucas Hedges plays Patrick, a hormonal teenager whose life is upended when his father dies suddenly, and he's left in the care of his reluctant, downcast uncle Lee, played by Casey Affleck in a tour-de-force performance that has many experts ready to engrave his name on the Oscar for Best Actor. But the real revelation is Hedges, who, at 19, is living out a kind of dreamlike fantasy that most actors spend most of their careers in search of.

Despite his young age, Hedges is far from green. After landing his first speaking role as a spirited 10-year-old in the underrated Steve Carell comedy Dan in Real Life, which was written and directed by Hedges' father, Peter Hedges, the Brooklyn native sharpened his craft with small roles in big movies; Wes Anderson's Moonrise Kingdom, Terry Gilliam's The Zero Theorem, and Jason Reitman's Labor Day, among them.

Over the phone, Hedges indeed sounds like someone who grew up immersed in the arts, emotionally in tune and preternaturally self-aware. Whether he’s recollecting his time on set or bemoaning the recent election, Hedges' words are carefully considered. Even when discussing the joy he felt after learning that he'd won the role of Patrick following five painstaking auditions, Hedges maintains his composure in a way that teenagers almost never do. "It went from being a fantasy to being very real in a split second," he said. "I rejoiced for a bit, and then I was like, 'Oh shit, I have to produce now.'"

How familiar were you with Kenneth Lonergan’s work prior to getting the script?

Do you remember getting the call telling you that you got the part?

Kenneth actually told me in person. After the fifth time I auditioned, we were taking the train back together and he told me there on the train that I had gotten it. I can't describe what it felt like exactly. I can imagine it feels similar to the feeling NBA players get when they're like, "With the fifth pick in the NBA draft;" it kind of feels like that because immediately in that moment I start picturing myself on this movie with these people for the next two months and every day I get to wake up and return to this. That's where my mind went and I just yelled for joy.

Your character, Patrick, is very much a typical high school teenager, but you grew up in a world rooted in the arts. How did you find common ground?

Well, one similar factor between the two of us is, ultimately, the thing that connects every human being: love, right? Patrick and I both share a need for love. I also have a similar connection with my dad that Patrick has with his dad. Patrick and his dad, I imagine, were best friends, and that's the relationship I have with my dad. Granted, I didn't go boating with my dad, but we watched movies, we did play catch together. I wasn't necessarily the all-American boy, but we did play sports together, and in order to play this part, I don't think I necessarily needed to start from "How can I get into this toughness?" I just needed to start from the place of "Okay, I'm a human being and I need to be loved and am I getting that love right now or not?"

After having known Casey since we finished filming, he's a different person than he was on set, because if you see the movie, I can imagine it's hard not to approach it from a somewhat method standpoint, so Casey felt absent at times and while we were filming, I mistook it for Casey being Casey. But in reality, it was just him playing the character. But one overlap between my relationship with Casey and Lee's relationship with Patrick is that me being Lucas and being a young actor on this film set, I wanted validation from Casey because I want to be an actor and he's one of my heroes, so I wanted love and validation, and he didn’t always give it to me. That really helped me because that's exactly what's going on with Patrick. Patrick just wants love from Lee, and he doesn't give it to him. And it wasn't until we finished filming that Casey was like, "Look man, you did an amazing job. I just couldn't tell you when we were filming."

You know, I gotta say this is one of the only movies I've done in which I feel like I didn't think once about how this movie would be received, and I think that's because I had such a big role and because I've been in so many movies now that I have an understanding that not every movie is going to be a big deal and not every movie is going to be received well. So I've been around enough to know it doesn't really serve me to get my hopes up. The only thing I need to do is my job, and that's the only thing that I'm in control of.

Are you prepared for the storm that lays ahead, in terms of awards season and the machinery that comes along with it?

Hearing you say that excited me, but fortunately enough, I have a project I'm working on right now—I’m doing a play—which is a real blessing in my life because it keeps me grounded throughout all of this. My work is human, my work is connected, my work is with my breath and my breathing, and I have to stay with myself. I can't get lost in an idea in my mind of what my life is going to be. I have to just be connected, and because this is the first experience like this in my life, I think it's very easy for me to get lost in it and fortunately enough I'm not going to. I'm not gonna let that happen because I have a job to do.

This movie is especially relevant today because of the way it deals with grief, something half of the country is experiencing right now. What is your own personal relationship with grief?

That’s definitely been one of, I think, the biggest changes in my life. When I was in high school, I feel that I was addicted to misery and addicted to this negative story I told about the world, and the universe, and free will, and all of these things that an angsty teenager can become addicted to just from taking too many philosophy classes. But I feel now that I try to surrender to my grief and give it a voice. I think it's important to feel what we're actually feeling, so I try to stick with myself, and I think a lot of the great suffering in this world, at least in my experience, comes from when I abandon myself and I don't listen to myself. And I think a great way for me to listen to myself, especially when I'm grieving, is to allow myself to feel what I'm feeling and to not condemn it as wrong or bad. If I don't feel good, I don't feel good, and that's okay. In fact, it's welcome. I welcome it and then it dissolves into light.

I know this was your first election. Were you profoundly affected by the election results?

Yes. It still doesn't feel like it's really sunk in. It doesn't really seem real, but it was the first election that I ever voted in. I think this movie parallels what's going on in America very well because I think it's a movie about a man who's dealt a hand that he can't recover from. I think half of America believes they’re not going to recover from this election and that this is a hand that will ruin us and I think, no matter what would've happened, half the country would've felt this way. I just really hope that people get to see it because I think the message of the movie, if there is one, is that Lee Chandler's life is beautiful regardless of the legacy of what has become of him. I think his story is a beautiful story.

It seems like being that in tune with how you're feeling is crucial to being an actor.

Yeah, definitely. I think to be a great actor is to be great at surrendering to the universe and whatever life sends your way. That's one of the most important things about this job, and I also think the things I'm trying to work on as an actor are exactly what I'm trying to work on as a person. So that's a blessing that I have job that is married so beautifully to my well-being in real life.

Growing up in the business, you obviously didn't have a regular childhood. Do you find it difficult to relate to people your age who aren't actors or artists?

No. I don't entirely believe that there are artists and there aren't artists. Like a baker and a butcher are, in many respects,  just as much of an artist as I am and their work is just as human as my work is. That having been said, I do find that there are certain people that I am drawn to more than others, and I'm more often than not drawn to people who want to experience things in a profound way. I'm very interested in living as intense a life as I can, which as far as I'm concerned, my life has been incredibly intense for as long as I've been alive, and I want to be able to keep it that way. I feel like we're all really much more similar than we think we are.

You don't often hear people your age speak this way, where do you think this came from? Do you think it has something to do with growing up with a father who made a living expressing himself?

Both of my parents, really. My mom's an artist as well and she's a poet and my dad's a total mensch and just the greatest guy on earth. I did a year at acting school, and I think every person who is profoundly depressed in this world should go away and do a year at acting school because the beautiful thing about conservatories is that they're emotional educations more than anything else. I found that at this first year in acting school, my focus shifted from how can I get better to how can I love myself more. And I find that in my pursuit of self-love, what falls into place is my love for other people and my ability to listen to other people and be clear in the fact that there really is no difference between me and the person I'm talking to, and what they are saying is the only thing that ever matters in this moment, and nothing else really exists outside of this moment. It's a combination of being raised in a family that stressed love, but it's also this realization that the only thing that ever matters in my life, from this point on, is this idea of how can I love myself more, and what comes from there is my ability to be there for other people. I can't be with somebody else unless I love myself.