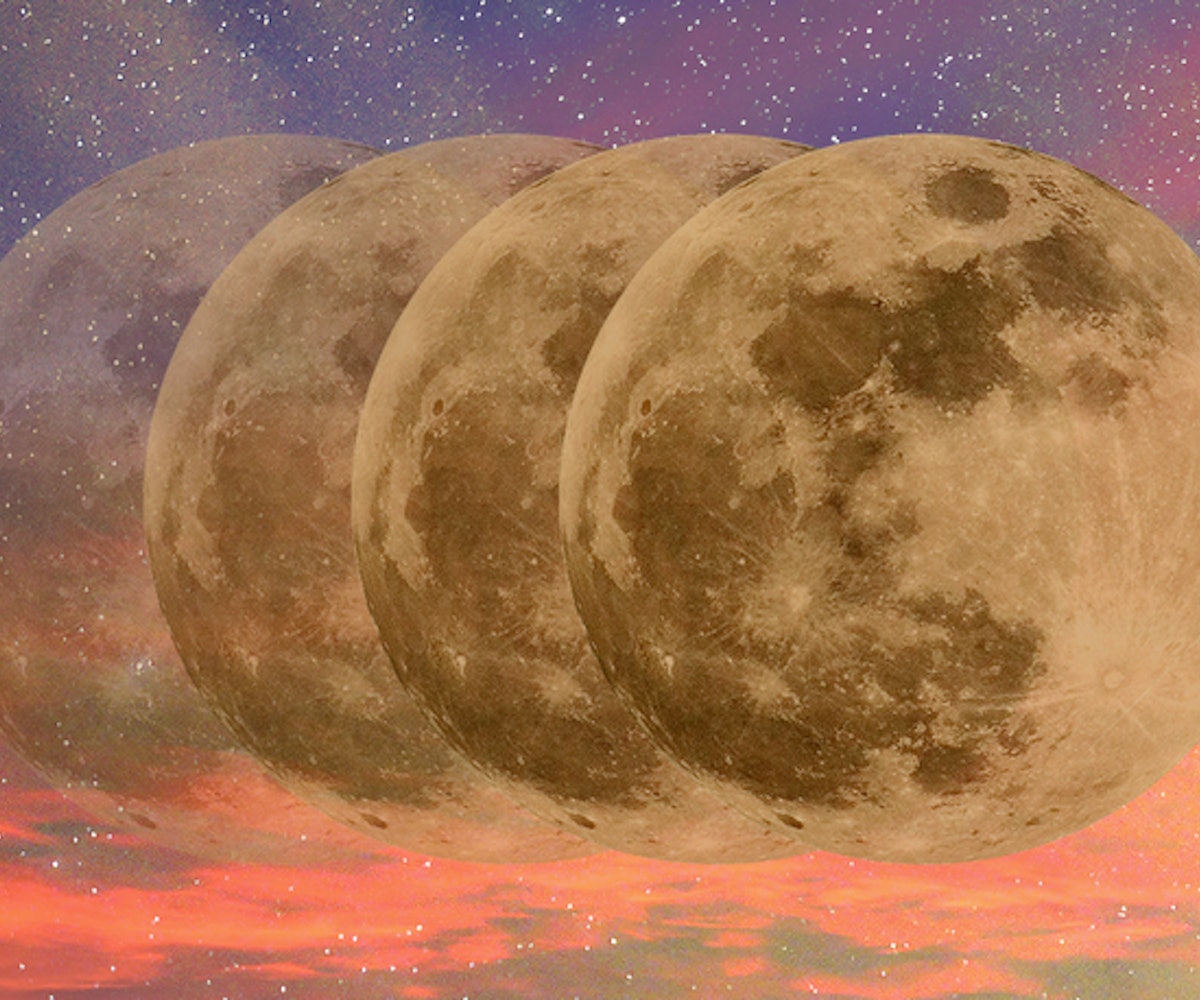 If you’ve got your antennae tuned to conversations about the cosmos, you might have heard excited discourse springing up around the solar eclipse that’s going to rock our socks off at the end of August. I, too, can’t wait to feel the dark waves of that roughly two-minute occurrence but, in this moment, I mean to wax (moon pun intended) reverently of tonight's upcoming lunar eclipse. The full moon will be in Aquarius, opposite Mars in Leo, and the dog star Sirius will be aligned with the Sun. In Mercury retrograde’s shadow zone, now more than ever, it will be our time to step outside of time.

How does one step outside of time? For those of us who aren’t intergalactic travelers or secretly building a machine akin to the one in Back to the Future, stepping outside of time is about mindfulness—about breathing in and using each of our senses to witness the world without fear or expectation. Chaos cannot and will not be controlled, neither can any of us presume to know the aftermath of destruction. We can only change ourselves, we can only move in the direction of change and recognize that such movement is necessarily difficult.

To break it down lightly, during a lunar eclipse, Earth’s shadow obscures our moon from view. This lunar eclipse will be partial—its umbral shadow casting a reddish veil on the moon—and gorgeous. Unfortunately, yet appropriately, America’s experience of this lunar eclipse will be far from the majestic experience expected for Africa, Asia, Antarctica, and Europe. Perhaps for many inhabitants of the U.S., the full moon has got a valuable lesson; what’s happening above us and around us is bigger and more powerful than what we can see. And, I’m not talking about Russia, okay? Although anything involving Putin doesn’t bode well, the picture is bigger than two world leaders making backroom deals. It’s climate change, ceaseless wars, the condoned brutality of the state; it’s capitalism trailing its poison fingers down each of our spines as we sit hunched over computers trying desperately to remain present, to fall in love, to pay rent.

If this all sounds like too much, the truth is, a full moon is never not an event. Even those of us who refuse to subscribe to astrology’s foretelling can’t help but look up at a full moon and feel relief. There’s something soothing, after all, in knowing our night walk is illuminated—not with streetlights, LED signs, or the fluorescent buzz of store displays but rather with an unblinking orbital body. What could it mean to you, reader, that this week’s full moon will be obscured in a way, will refuse to give you the relief you crave? Illumination, whether you’re interested in outer light or inner knowing, is on the horizon.

Sirius, known as the brightest star in our night sky, will rise with the lunar eclipse in Aquarius and eventually align with the Sun in Leo. The star’s return (post a 70-day absence) and conjunction with the Sun, is known as the Lion’s Gate Portal. Sirius holds renewal energy. It is a star that carries collective memory and inspires collective renewal. It reminds us that we have always been in flux, in a state of upheaval. Even those of us who have been taught that we were never meant to survive, survived. Whether you were born a lion or not, a lion’s roar manifests inside you. Whether you were born an Aquarius or not, your hands are strong enough to be a cup to drink from, an offering. This full moon, let air and fire kindle inside you, imagine the lunar eclipse as a call to arm—yours. What secret powers do you hold? What outside forces have you given permission to hold power against you? What are you willing to give up to feel more free?