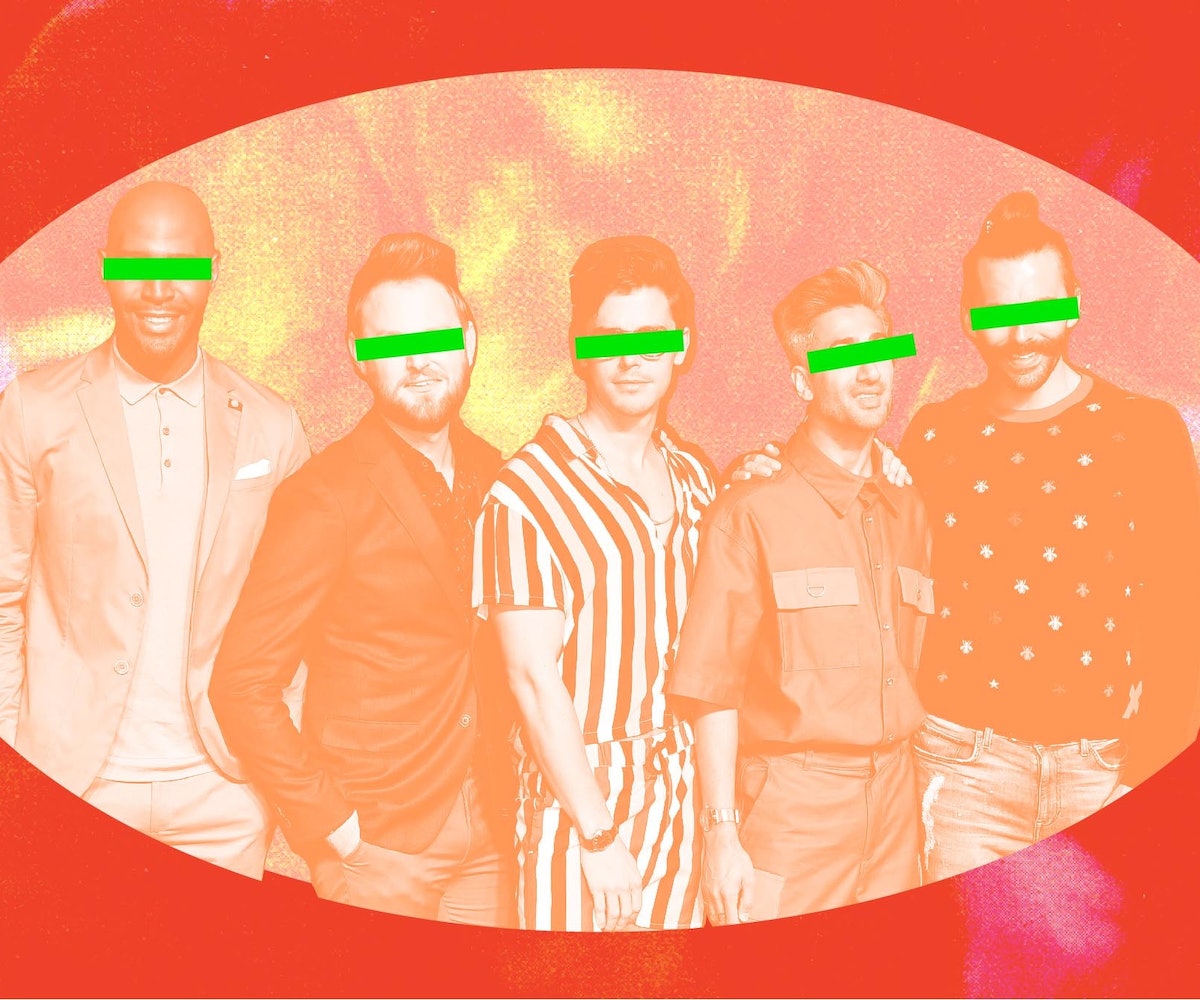 In the first episode of 100% Hotter, a British makeover show that recently made its way to Netflix, a woman named Jade, who presents like a human Barbie—platinum hair, generous self-tanner, pink satin corsets, platform heels—watches as strangers assess her looks on a scale of one to 10. They compare her tan to “having been in a bath of gravy,” and one man refuses even to assign her a number. In an implicit punishment for her style crimes, Jade has to wipe off her makeup on camera and don a T-shirt with the words “work in progress” on it. By the end of the episode, made-over, she is wearing an off-the-shoulder purple dress, kitten heels, and lowlights, no longer a Barbie, now more of a Bachelor contestant.

100% Hotter is technically a “makeunder” show. A makeunder is different from a makeover in that it claims to help people look “more themselves,” by replacing their extreme clothing and grooming choices with quieter, subtler ones, so that the goth won’t scare her neighbors or the Barbie woman won’t get leers on the street  “I feel sad that she feels she has to do that to look accepted or loved or whatever,” stylist Grace Woodward comments about Jade to her two fellow cohosts. “We need to crack this shell and get to the goodness inside,” agrees hairstylist Daniel Palmer.

Of course, Jade’s psychological motivations are hers to know and no one else’s, and her goodness could be just as apparent in a corset as in a cold-shoulder top, but the logic here is similar to the doctrine of body positivity, which brands embrace while refusing to acknowledge their complicity in the project of making people feel bad about their bodies in the first place. As with body positivity, the circumstances underlying beauty ideals haven’t changed, but the language around them is more heavily policed. Rather than offering to make you skinnier, pretty, or cooler, most makeover shows, at least in 2018, operate under the guise of helping people be more comfortable, healthier, or more themselves. But changing someone’s appearance is not about helping them, and never has been. Instead, makeover shows are about cultural hegemony. The driving force at the center of the project, no matter what other window dressing of concern or inclusivity is deployed, is always about asserting the authority and dominance of a certain structure of taste. And that taste is (surprise!) controlled by the values of rich white people.

100% Hotter is particularly unsubtle about its operations, but its motivations are not exceptional. The idea of transforming someone into something acceptable to a certain set of society (instead of transforming the society to be more tolerant of that kind of person) has been going on since Greek mythology and fairy tales. (Cinderella was the original What Not to Wear.) But the explosion of reality television offered a ready platform for a tier of makeover shows and makeover competition shows that were relatively cheap to churn out. They offer examples of how best to comply to the demands of a current taste system through fashion choices, makeup, diet, home decor, travel plans, wedding ceremony, parenting decisions, automobile purchasing, fitness regimen, and countless other arenas. There was Kitchen Nightmare, Bar Rescue, Tabatha Takes Over, The Swan, Ambush Makeover, Bridalplasty, Extreme Makeover, Tim Gunn’s Guide to Style, How Do I Look?, and the original Queer Eye for the Straight Guy among dozens of other candidates. All of them have the same operational logic, which is that what you think about your look (car, home, grooming, body, etc.) is less important than what other people think—or what “experts” do. And no matter their field of expertise, what is consistent with all the makeover show experts is that the values they are endorsing are not countercultural in the least.

It’s appropriate, then, that the U.K. and U.S. seem to have an exceptionally strong handle on the logic of the makeover show, given that this genre of reality television is an inherently imperialist project. Most of the recipients of the makeovers are working-class people. Many are also marginalized in other ways: people of color, gender-nonconforming, queer, fat, or otherwise existing outside of an extremely narrow set of norms. Often, they are non-normative bodies that could become normative with a few tweaks of disguising themselves appropriately.

In the before stage, often the greatest sin committed by the makeover recipient is not caring enough about what other people think about their clothes, hair, parenting, house, etc. The hosts come in standard good cop/bad cop formation, either drill sergeant-like disciplinarians or softer, kinder gurus. The tactics are softer but the commitment to cultural hegemony is the same. In both cases, the subject of the makeover is presumed to be ignorant about the basic choices that they make every day. The fat person must not know about vegetables or a waistline. The scantily clad woman must be introduced to full, uncropped shirts. A goth who has spent years of their life painstakingly recreating the look of a character from The Nightmare Before Christmas gets to learn about tightlining. It’s meant to be instructional, but is, at its core, always insulting. What person immersed in the American cultural milieu is unaware of what the idealized body or home should look like? Veering away from it is never an act of ignorance, but instead one of rebellion or survival or myriad other reasons.

Makeover shows are soothing, there is no denying. They appeal to the part of the brain that loves order, and to the particular American logic that all of life is forward advancement and self-improvement, that all your past selves are worse than your current self and that your future self will be better still. First, you repent and are assessed, then you are transformed and redeemed. The predictable rhythm of that process makes for the kind of television you can leave on all day without interruption. The scenery and players change, but the results are always the same: The subject enters unkempt and leaves with tasteful highlights, or buys a house with an avocado-colored paint job in the kitchen but, in the course of 30 minutes, has a new tasteful tile backsplash. They are hypnotic in the same way that watching a factory line of crayons being boxed or aluminum being rolled into foil is: You are watching the disordered being ordered. In factories, it is according to industrial protocol. In makeover shows, it is according to the logic of the overarching definition of good taste. The messiness of human choice and lived experience gets tidied into easy decisions. What makeover shows peddle is conformity under the guise of helpfulness.

These are inherently capitalist endeavors, of course. Shaming people (often, but not exclusively, women) for their appearance and lifestyle choices is big business for most corporations, that’s nothing new. Your makeover is about purchasing and using a new slew of products. It is cosmetic, surface-level improvement. No makeover show has spotted that their subject looks tired from long hours on a job and then sent a rep to organize their workforce and negotiate for more vacation time and better pay. (Note to any television producers reading this, I would 100 percent watch that show.) Even shows that seek to address the root of a larger problem do so in the service of aesthetics. Netflix’s reboot of Queer Eye, which pops up right alongside 100% Hotter, attempts to subvert the conservative cultural norms makeover shows have traditionally pushed. The hosts are charming and fun, and the show is saturated in a feel-goodsiness that makes watching straight men learning how to make a simple dip an emotional event. But the structure at the center still plays into the sanitized accepted aesthetics of every other show. The fab five leave houses tidier and facial hair neater in their wake. In the best cases, their subjects even seem more emotionally open, and more willing to question their assumptions about gender and grooming. But the roots of their subjects’ problems remain unaddressed. How could they not be? To admit that people need more than a wardrobe overhaul and a cleaner basement is to undermine the project at the center of the show, that your life can be better if you acquire the correct set of things.

Makeover shows aren’t really about helping you become more the thing you want to be, they’re about fitting you better into the ever-shifting mold of beauty norms that our culture keeps churning out. They aren’t there, really, to help the person who loves making suits from candy into a better tailor or someone who never buys new clothes for themselves out of the precarious financial conditions that make that a logical choice. It’s about selling you something, duh. And fair enough. There are plenty of reasons that you might seek to be more acceptable to cultural hegemons, and hey, it makes for entertaining television. Just recognize a sales pitch when you see one.