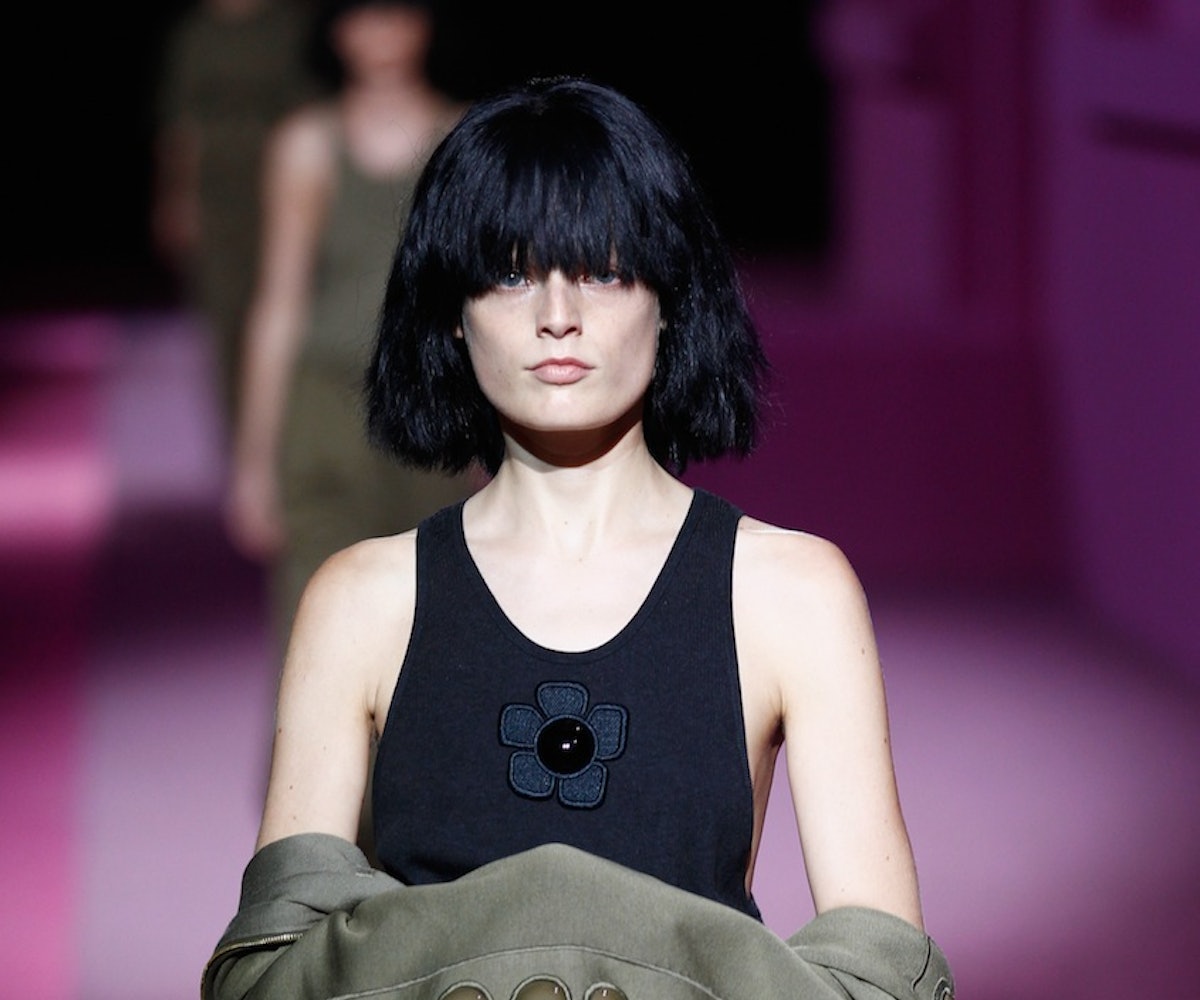 Leave it to Marc Jacobs to close New York Fashion Week with a bang....and keep everyone talking, even long after his show has ended. If you checked Instagram last night at all, you'll already know that the designer presented his spring 2015 collection yesterday. Between the voice recording "soundtrack," the models' fringed black wigs, and the utilitarian-cool jackets, dresses, and tops, it's impossible to pick a favorite from the Thursday finale. So we've narrowed down all the must-know details about Jacobs' show below, so that you can keep obsessing. (We know we will.)

1. Headphones mandatory. Jacobs partnered with Beats by Dre to give every guest a pair of headphones. Rather than blasting thumping house music from the speakers (ahem, like MBMJ), instead the audience listened in their headphones to a recording. The concept was conceived by record producer Steve Mackey, and was inspired by the '70s avant-garde fiilm The Girl Chewing Gum. Even Andre Leon Talley and Anna Wintour got in on the action--they had no choice otherwise--which automatically makes it rad.

2. Housing works. We can always count on Marc Jacobs to do his own thing each season, but this time he went seriously out on a limb with a giant pink house. Rather than a shadowy beach set like last season, this time models paraded around the bright home base in army-inspired getups. The perfect contrast, if you ask us.

3. Top models. When you're a supermodel as big as Karlie Kloss, you can do whatever you want. o the fact that Kloss, along with other top models such as Hanne Gaby and Gigi Hadid, opted to make cameos in Marc, it was major. Even beneath that black fringe, we'd recognize Kloss anywhere.

4. No makeup--seriously. It's not unusual for makeup artists to brag about how they're going for the "no makeup" look while piling on layers of foundation...but for Marc Jacobs, Francoise Nars skipped makeup all together in favor of a bare, dewy complexion. "The look for the show features no makeup – we only applied moisturizer," he said. "With Marc we always take it to the extreme, we’ve done bold looks in the past, but this season we wanted to make a statement by not applying anything."

5. The clothes, the hair, the shoes. Jacobs told Style.com his collection was inspired by '60s singer, songwriter and model Grace Slick. She wore fatigues to protest the Vietnam War in the '60s, but Jacobs' take on this rebellion was decidedly more modern. Oversized dresses, boxy jackets, and statement details were just a couple of the MVP pieces he sent down the catwalk, all topped off with Dr. Scholls-esque slides that straddled the line between awkward and cool. Keeping with the uniform theme, each model sported an overgrown black wig--spring's twist on last season's bowl cuts, perhaps?