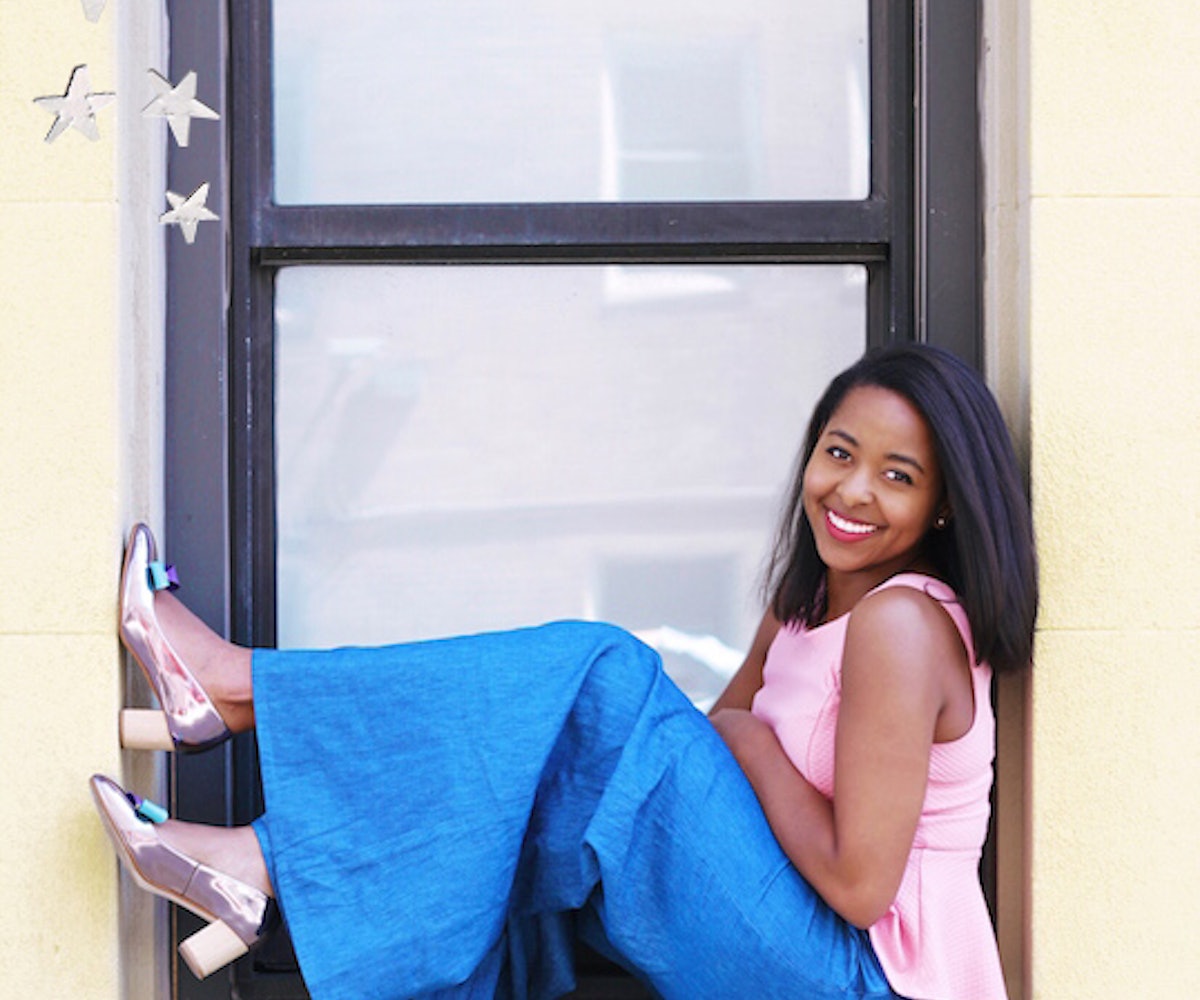 Marjorie Lacombe isn't your average blogger. In fact, she divides her time between going to classes in the morning, answering phone calls and emails in the afternoon, working on projects for her blog later in the day, and spending her evenings in class or studying. She was a psychology major with a minor in global health & health policy, so while you see her pastel life online, recognize that she has a Harvard degree. "My weekends are pretty split right now between metabolic biochemistry and editing photos of colorful buildings," she said in an email.

Launched in January of 2013, The Kipi Blog serves as Macombe's creative outlet for colorful DIY projects in a paste- themed world that "showcases original ways to fill your home, passport, and imagination with color through décor, travel, and art features." Some of her other creative work includes her #watchitseries, where she explored new ways to define time, and #followthatpinkcoat, which shows Lacombe traveling through different places in a pink coat that unifies them all.

"The word 'kipi' started as a nickname I was called by my dad since I was a little kid," Lacombe added. "Now as an adult, the word has grown to embody all things delightful about childhood—fun, adventure, simplicity, and the freedom to make a mess of things."

Get to know Lacombe more in the interview, below!

Could you detail the layout of your career path for me? How did you develop your aesthetic?

Looking back, I've always focused on trying to make life positive in some way. When I was in high school, I started a pencil case business called "SweetBag," where people could design their own bags by choosing their colors and adding cute patches on top, like a cupcake or a palm tree. In college, I started an online platform called "I Like Fall," where Harvard students could sell their unused clothing. My team collected the clothes, modeled them, ran pop-up shops, and gave a cut of the profits back to the students. The whole theme of the site was positivity, color, diversity, and embracing the sense of a shared community. By the time I started The Kipi Blog, it came as no surprise that I produced content that could help others add color and happiness to their own lives through DIY projects and creative photography. Perhaps the greatest aesthetic change for me occurred over this past year as I further grew into capturing and celebrating pastel colors. I undoubtedly think Instagram was a major component in really catalyzing how I wanted to portray myself to the rest of the world. The platform serves as a constant reminder of my evolution as an artist and also exposes me to other creatives, especially outside my field. Together, these two things really inspired me to hone in on my unique, pastel aesthetic.

Whereas I saw my career in art as a means to positively influence the mind, I saw my career in medicine as a means to positively influence the body. Not only are both my parents doctors, but they also owned a care home for elderly patients throughout my entire childhood. I think the combination of witnessing illness while also forging close connections with patients led me towards this career path where I could directly have positive impacts in people’s lives. Over the years, my career in medicine drove me towards public-health work and studying in Bolivia, Ghana, Vietnam, South Africa, and Brazil. After graduating college, I spent two years working as an associate in the Pediatrics Inpatient Ward in Boston’s largest safety-net hospital. Now, as a medical student at the University of California, San Diego (UCSD), I am excited to see how my artistic and medical fields will further grow and intersect with one another.

I am working in an industry that is predominantly men (science) and an industry that is predominantly white (photography/DIY blogging). So, as a black woman, I regularly jump between realms where gender and race have very different levels of meaning. Despite being aware of this, I often don't think or dwell on it significantly in the everyday practice of things. At the end of the day, I want to be a doctor and I want to create art. My gender and my race should not be barriers to keep me from achieving those things. So I maneuver best as Marjorie, which encompasses my gender, my race, my experiences, my talents, my knowledge, and my values.

I have always lived in very multicultural environments. My parents are both from Haiti, I was born and raised in San Diego where it's quicker to drive to Mexico than to Los Angeles, I attended private schools with majority white American students, and my husband is from the Czech Republic. Inevitably, I grew up perceiving identity, primarily, as a very nation-based concept. As a child, the prevailing Haitian culture, language, and music that defined my home also defined me, and it defined me much more than my "blackness." I simply didn't think much about my black identity outside of my Haitian identity.

When I started my freshman year at Harvard, this perspective took on a new shape. I joined an acapella group, KeyChange, which sings music by black artists from the African diaspora—from Etta James to Bob Marley to Beyoncé. It was the first time I found myself in a group that was comprised predominantly by black people. Over the course of four years with this group, which quickly grew to become my second family, I realized how my black identity was really one part of my multi-faceted identity. And I learned most about these identities by rooting myself among people and places where I found a sense of belonging. At home, that was my Haitian identity; in KeyChange, that was my black identity; in class, that was my intellectual identity; and in the creative realm, that was my artistic identity.

My biggest learning curve came from recognizing that all these identities co-exist, intertwine, and influence one another at different times and at different strengths. People are, essentially, walking kaleidoscopes. I guess it's why my definition of "blackness," and of myself overall, is constantly evolving as I go through new experiences and engage in different outlets.