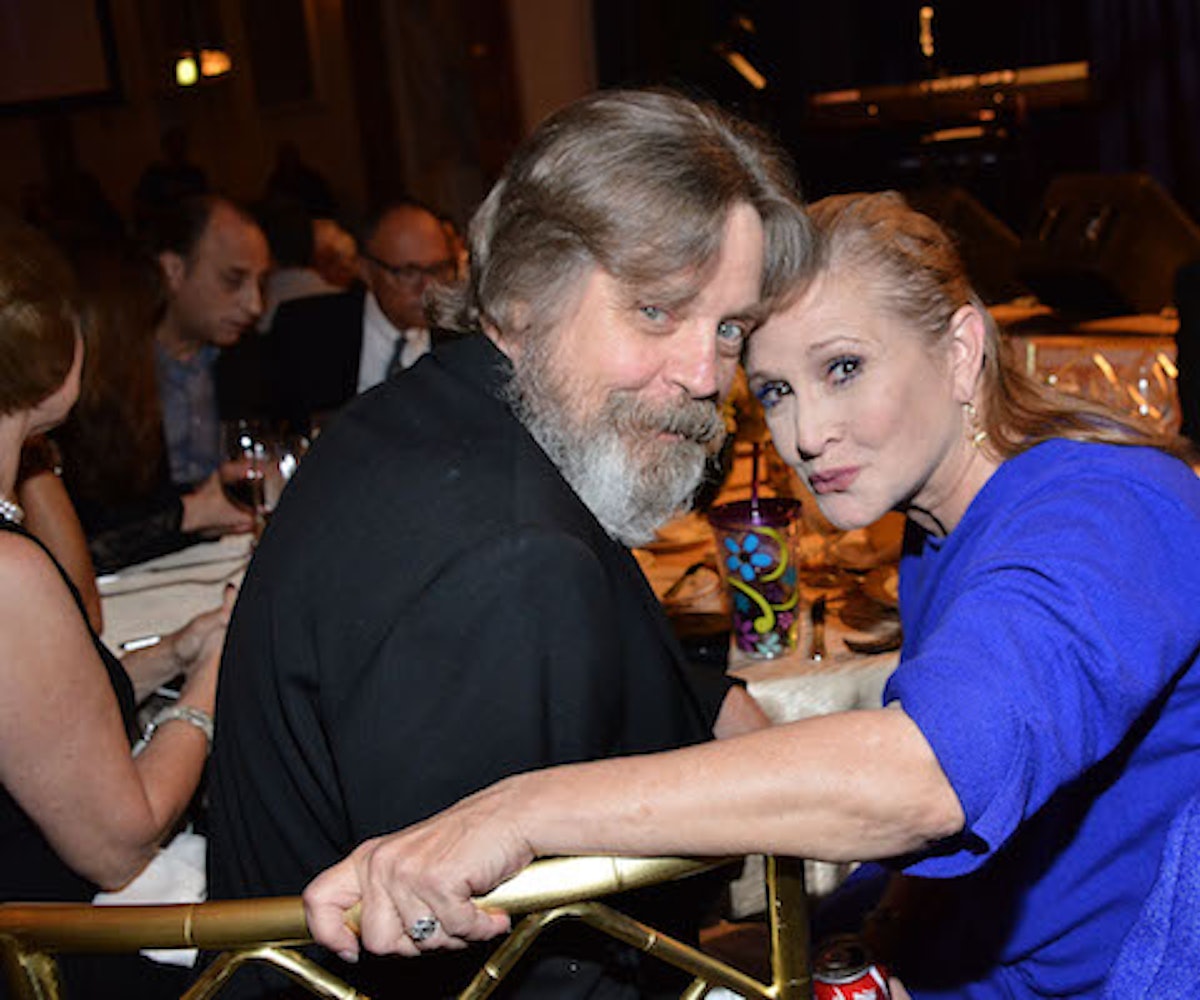 Because there is still a gaping hole in our collective hearts from the loss of Carrie Fisher—and the devastating news that Leia won't make an appearance in Star Wars: Episode IX—Mark Hamill has gone ahead and made our eyes all red again with his touching tribute to the late Star Wars princess at the ongoing Star Wars Celebration in Orlando, Florida. The actor is still clearly raw from the loss, as reports describe him from bouncing back and forth between laughter and tears and at one point said, "I'm mad. She should be here." We know.

The stories Hamill shared were intimate and paint a portrait of a deeply loving, though sometimes contentious relationship. It may or may not come as a surprise that Hamill was instantly attracted to Fisher the moment he met her, saying, "I wanted her to myself, I didn't want to share her with Harrison," and that he knew "I couldn't handle her as a girlfriend." This didn't stop them from making out on a couch once—supposedly to see which one was the better kisser—that ended with Fisher bursting into uncontrollable laughter. Hamill also shared that Fisher once made him squeeze into her space tunic as she paraded him around set, which is something he says he definitely wouldn't have done for anyone else. But Fisher? "She just liked to dress me up."

For Hamill, Fisher's fierceness and sensitivity are what made her who she was. He said, "All the bravado? It was just a defense mechanism. She wore this toughness like armor, but down deep there was this vulnerability of a little girl. That’s how I think of Carrie." He said he still thinks of her every day, particularly just before he falls asleep. He shares, "When I think of her, she's looking down from the celestial stratosphere with those big brown eyes, that sly smile on her face as she lovingly extends me the middle finger. And that's how I want you to think of her. That was Carrie."

Fortunately for fans, there's still (a new) hope that we haven't seen the last of Leia yet. At the Star Wars Celebration, Lucasfilm president Kathleen Kennedy said that we will get to see a lot of Fisher in Episode VIII–The Last Jedi. It remains to be seen how her absence in Episode IX will be explained or felt. Whatever happens, she'll certainly never be far from our hearts.

(Via Polygon, Mashable and Hello Giggles)

NEXT UP
The Art Issue 2022
The Most Interesting Fashion Designers Right Now? Artists.
Culture
10 Luxurious Gifts For Your Bougiest Friend
Entertainment
Precious Pepala Is Going From TikTok Covers To Her Own Resonant Songs
Culture
NYLON Party Report Card: Partying With The Stars & 94 Foot Long Whale At The Natural History Museum Gala