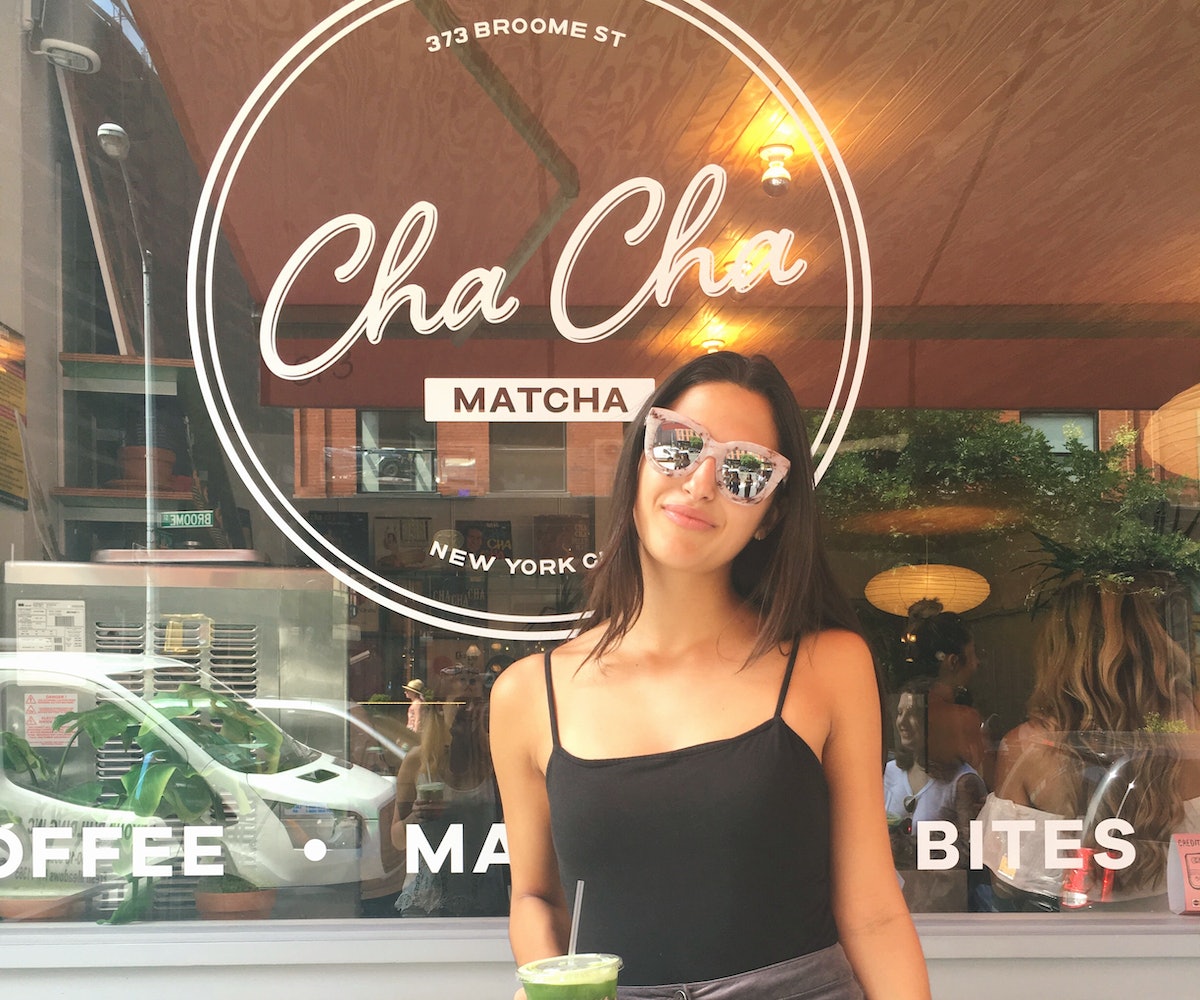 If there's one thing in the world that I absolutely can't stand, it's when people lecture me about drinking too much coffee. But as a latte addict, who averages at four cups per day and would gladly hook herself up to a French Roast IV, I tend to get this lecture a lot.

And yet, my unwavering devotion to coffee began to crack this summer when I traveled to Japan and discovered matcha, a caffeinated drink made from whisking finely-milled green tea leaves into water. While on my trip to the Kyoto region—home to one of the main tea-growing areas in Japan—matcha became a regular part of my day, from matcha lattes with breakfast to the matcha ice cream served on the plane over. Once back in New York City, I couldn't help but notice that matcha has become a full-on craze, and my interest in the drink became borderline obsessive.

The caffeine content in matcha varies greatly, but in the highest quality versions of the tea, it comes in at around 70 milligrams per cup as compared with coffee's approximately 150 to 200 milligrams and green tea's 35 to 70 milligrams. The reason matcha's caffeine count differs from regular green tea, which involves steeping tea leaves and then removing them from the water, is because matcha drinkers consume the entire leaf, giving them not only a slightly higher dose of caffeine but also up to 10 times the antioxidants. Win!

Chef and certified tea expert Melanie Franks explained to me that the caffeine molecules in matcha are also more complex than those of coffee, meaning they stay in your system longer. Translation? Matcha drinkers get all the buzz associated with coffee, minus the crash.

"The coffee caffeine cycle can be a little crazy; you’re either smoking or eating or you need some more coffee or you need a chocolate," Franks said. "[With matcha], that will be gone and you’ll have a little more peace in your life."

Part of this is because matcha contains high levels of L-theanine, an amino acid with calming benefits that's often used in natural anti-anxiety supplements. It's also the main reason Matthew Morton and Conrad Sandelman, who together founded NYC cult matcha bar Cha Cha Matcha, swear by the stuff.

"The kind of buzz [matcha] gives you is this focused energy," Sandelman explained to me recently. "With coffee, sometimes you get so jittery that you actually get unfocused."

It's not surprising then that the vibrant green powder has long been used by Zen Buddhists during meditation.

But enough talk about the purported benefits of matcha—none of these words mean anything if the drink doesn't deliver in reality, particularly for a coffee addict like me. So I decided to put the centuries-old tea to the test: For the next week, anytime I'd usually grab a coffee, I vowed to reach for matcha instead.

To be honest, I secretly hoped this challenge would double as a way to prove to coffee-shamers that my standard iced latte has no rival. I thought I'd use this experiment to shut down holier-than-thou tea enthusiasts—I never expected to become one in the process.

Click through the slideshow below to read how it all went down, plus get some advice on buying, making, and drinking matcha from all the best experts in town.

Day 1I go out of my way to pick up a hot jasmine matcha latte in 90-degree weather while battling the end of a bad cold. If that's not dedication, I don't know what is. Though delicious, the drink is pre-sweetened and mostly milk, so it isn't surprising that it doesn't have much of an effect on my energy levels. I give myself an A for effort and vow to order the real deal tomorrow.

Marissa Lippert, nutritionist and owner of NYC's Nourish Kitchen + TableOn choosing where to go: "Make sure you’re getting [the matcha] from a place that you trust. Not necessarily a big chain, because that’s not going to be a quality matcha—well, it may be, but I doubt it."

On avoiding misconceptions: "Matcha supposedly has weight loss benefits, but it’s a tea. You’re not going to lose 15 pounds by drinking matcha."

Day 2I stop by NYC newbie Cha Cha Matcha for a hot matcha (matcha whisked with hot water) and a quick chat with the shop's founders, Matthew Morton and Conrad Sandelman. We bond over a mutual love for Japan and ponder the fact that many Japanese natives don't understand how one of their daily staples could become a foodie craze elsewhere.

"They're like, 'What do you mean you're setting up a café that specializes in matcha—why don't cafés already have matcha?'" Sandelman says. Adds Morton: "It's like Heinz ketchup."

The caffeine takes a good hour to kick in, but when it does, I am WIRED. Even so, I can't resist hitting up Cha Cha later that night for round two. (Hey, it counts as work, right?) This time, I try their coconut matcha latte, which is enough to power me through the 30-minute wait for a table at Momofuku. Score.

Morton, on first impressions: "If you try matcha somewhere, and it’s not what you’ve expected, know that not everyone’s making it correctly."

Day 3Today, I try my hand at making matcha myself. I wish I could say that I expertly whisk my powder into a creamy froth that would have made Sandelman and Morton proud, but in all honesty, it's kind of a disaster. I'll put it this way: The only thing my sleepy roommate says after waking up to find me gulping down the mixture is "ew." I don't get the same buzz as yesterday, and I experience my first coffee withdrawal headache thus far.

I attempt to make it to MatchaBar in Chelsea for a pick-me-up before the shop closes, but end up getting a beer (or three) with a friend instead. Oh, well.

Melanie Franks, chef and certified tea specialistOn pairing matcha with food: "Matcha has some similar qualities to chocolate. Chocolate has kind of a rich, earthy taste, and it pairs nicely with matcha. Cheeses actually go well with matcha too... nice, subtle flavors, seafood, rices, vegetables, those kinds all can go well."

Day 4Finally, a breakthrough. I have a second go at making matcha—this time, with a lesson from tea instructor Tomoko Hondaat the Kyoto-headquartered Ippodo Tea in Midtown. And guess who perfected their first froth?! This girl.

I also try a shot of thick matcha (koicha), which is made with double the powder and half the water of regular matcha. It wakes me up enough to stand in line for two-and-a-half hours for Drake’s Summer Sixteen merch pop-up, which is saying something. The major caffeine buzz is no fluke: Ippodo is one of Japan's leading companies for matcha, and will celebrate its 300-year anniversary in 2017. In other words, this stuff is legit.

Tomoko Honda, tea instructor at Ippodo TeaOn drinking westernized matcha: "If we bring only normal matcha [to the U.S.], you might not care for it. But [American shops] broaden our possibilities for matcha and open the window for American people to try it, although it’s not from Japan and it’s not authentic. From them, American people are getting interested in our culture."

Day 5By Friday, my interest in matcha becomes a full-on obsession. I morph into one of those preachy health nuts who won't shut up about their newest "life-changing" find. (Yes, I actually used the word "life-changing." I know, cringe.)

But I do manage to persuade a coworker to order matcha lattes for delivery from a spot across town, so my rant must be pretty convincing.

Melanie FranksOn matcha versus coffee culture: "Coffee culture here, it’s not like coffee culture in, you know, Italy. We just consume it as fast as we can. So that’s what I love about tea, and especially with matcha. It’s just a time to think and contemplate, and you can really enjoy it. It’s satisfying, and it’s beautiful, too. It has a long history."

Day 6 and 7Over the weekend, I have a realization: There's not a single part of me that still craves coffee. Really. None.

But there's another thing that's got me hooked on matcha that has nothing to do with caffeine. While I associate drinking coffee with rush and exhaustion, the ceremonial, ritualistic culture behind matcha lends the drink an overall aura of calm.

Maybe the most surprising thing I notice is that I've forgotten that the feeling of tiredness can actually be nice. I've grown so used to pounding down an espresso shot the minute I feel my energy waning, that I haven't allowed myself to relish the all-consuming feeling of sleepiness. While the crash cycle of coffee put me in a constant state of frenzied energy, the more gradual pace of caffeine in matcha eases me in and out of the rush.

Now, I'm not saying I'll be ditching coffee forever—my favorite order, an iced coffee with a splash of half-and-half, will always hold a special place in my heart. But as much as I hate to say it, maybe my aforementioned coffee-shamers weren't entirely wrong.