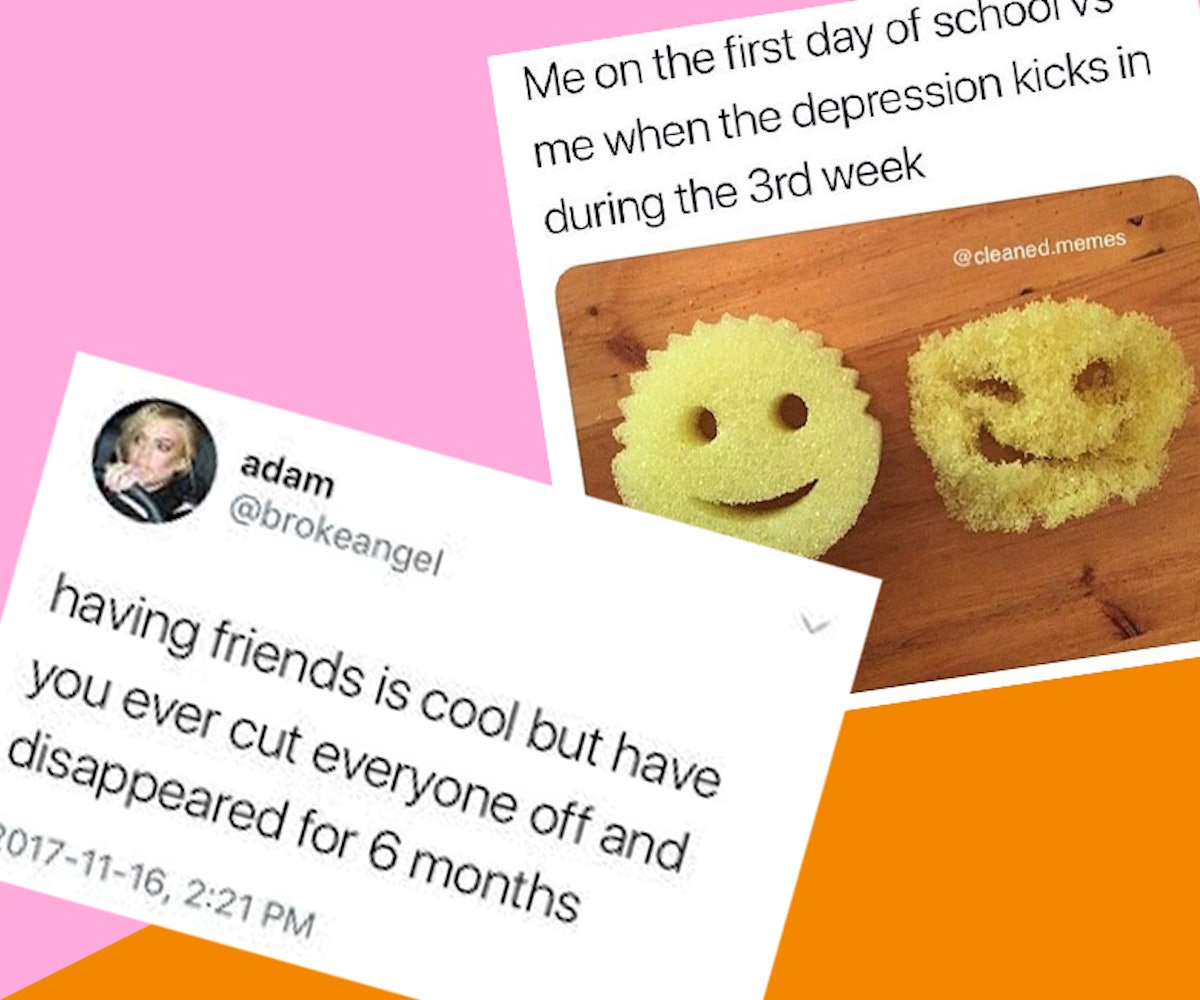 When I’m going through something difficult, the easiest thing for me to do is joke about the situation—handling something serious is easier when I don't approach it in a dramatic way. This also applies to my interaction with my own mental illnesses—I have anxiety and depression, and the best way for me to cope with my sometimes overwhelming emotions is to laugh about it. And since it’s the age of the internet, there are memes upon memes about mental illness that I can relate to, which I’ve found is an incredibly healing form of handling my feelings. Seeing others who seem to feel the same way and think similarly about themselves makes me feel less isolated. Finding out that there are other people with body dysmorphia who look in the mirror and see Mr. Bobinsky from Coraline? Amazing.

I constantly share memes about anxiety and depression with people in my life who struggle with the same things. Sometimes, they’re so spot-on that I wonder if the person who made it hacked into my brain and made it just for me—other times, they’re more general, but deeply relatable nonetheless. Often, seeing these images on my Instagram Discover page (which is usually chock-full of them, what does this say about me?) makes me laugh out loud and immediately send to three or four people who might feel the same way, or have gone through something similar. Personally, I've found that these help us to talk about something serious in a lighthearted way, while also making us feel heard and understood.

Cori Amato Hartwig, who runs popular meme Instagram @ManicPixieMemeQueen, started making memes about her mental illness for reasons similar to why I began seeking them out and sharing them with others. She says that she created her page “partially out of boredom and partially out of a need to cope with my own mental health issues.” Posts on the account, which boasts over 65K followers, cover sensitive mental health issues, but she has found a great deal of solace in reclaiming them—and so have her followers. Her method of coping actually served as an outlet for others to find relatable content: “Every day I get direct messages and comments from my followers telling me that I help them feel less alone, more understood, and even more willing to share their own struggles with mental health issues,” she says. As a follower myself, I could understand how others would feel that way. She has created a virtual space to talk about sensitive topics in a non-confrontational way, while also allowing people who are going through potentially traumatic experiences to interact with them in a humorous way.

Dr. Nicole Cooper, a licensed clinical psychologist and CBT specialist at the Union Square Practice in New York, noted that the use of memes like Hartwig’s, and like so many others that I see on social media, are beneficial because they use humor in conversations about mental health, which has the potential to “bring taboo topics—painful, disturbing topics—into the conversation in a way that can yield connectedness, comfort, and healing.” Things that people might, before, have left unsaid or struggled with alone for fear of judgment, are given meaning and validation through identification with someone else’s—even a stranger’s—post, which could make people suffering feel less isolated. This type of representation also helps in that it isn’t too serious, which can be an easier way to relate to a large audience: “It’s a great way to connect with others while keeping the tone light.” All too often, it's assumed that we should reckon with our mental health issues in a serious way, which can be draining. While it's necessary not to trivialize your own or others' suffering, constantly facing it with a stony face isn't always the best way to cope either.

These memes also have the ability to fill in the blanks when we are unable to describe our own experiences. Alina Arseniev-Koehler, a social scientist who studies mental health and social media, says, “I’ve seen some memes that really convey the pain of mental illness in a way that words often don’t, and capture the nuances of depression that can feel really isolating.” Knowing that emotions you thought you were the only one who felt, or things that you do that you didn't know others did too, is a validating feeling. For Dr. Cooper, memes can actually serve as a helpful way to understand her patients and start a conversation about something she may not have known. “Oftentimes, [they] can be a helpful window to show me exactly what they’re feeling,” she says. “It’s a wonderful jumping-off point for exploring something [that] maybe I didn’t know. Maybe they hadn’t told me before that when they feel sad they pull their hair out, or when they feel angry they punch their thigh.”

But there was a part of me that wondered whether these memes posed a problem for some people who suffer from mental illnesses, and if they potentially—and harmfully—normalized the behaviors that are exhibited in a way that could be detrimental, rather than providing a moment of relief. It seems like these memes could make unhealthy coping mechanisms seem normal or even acceptable: If so many others relate to them, one may feel as though their damaging behaviors aren't so bad. I joke about everything, but there may be a point where it becomes too much—when things should be taken more seriously.

Dr. Cooper revealed that, on a darker note, these memes can also serve as a scapegoat, or as a way to avoid tackling your problems in a beneficial way. “When humor is used as a form of ongoing avoidance or denial of reality, and when it’s used in place of or instead of getting appropriate psychological treatment for a mental health problem from an appropriate licensed professional, it can be damaging,” she says. “It’s a way of coping with pain, it’s not a way of solving problems.” When humor is used as a crutch for avoiding your problems, instead of as a method of coping with issues, it can turn into a problem. When the only way that you're dealing with your own pain is through sarcastic denial, you can inhibit your own growth and betterment.

There is also a line between joking about your problems in a constructive way and trivializing your own or others' pain. Arseniev-Koehler notes that "we don’t want to convey these experiences as if they are 'just something everyone goes through'; that downplays each person’s experience [with mental illness]." And when the tone of the joke doesn't express empathy, but rather mocks your situation, they can actually be very damaging. Dr. Cooper says that she has seen memes that show the creator's pain in a harmful way, and those, to her, actually make the situation worse. She says, "Show someone who was being mean to themselves, mocking themselves in a way that was mean, cruel, invalidating, not self-accepting, and that type of humor is not going to generate support and empathy, it’s going to make them feel isolated."

Bringing mental illness into mainstream conversations can, though, work to end the stigma against topics like depression and anxiety. "The process of sharing in general, not just through memes, reduces the feelings of shame or stigma, and it allows you to connect with the people you’re sharing with," says Hartwig. Sharing with a large platform, and using jokes to confront taboo topics, can make it easier for the conversation around mental illness to be had. Arseniev-Koehler notes that memes "can offer entry points into discussions about mental health among friends and family, or, sharing and creating these memes, might offer a lower-risk way to express mental distress." By providing a less stigmatized platform to talk about mental health, issues can be addressed before they become too much for the person feeling them.

Dr. Cooper reiterated the strength in an online community like the one that Hartwig has created. She notes that these accounts create a possibility for powerful group support, “as long as the people in that online community are supportive and kind, and use humor in a way that feels good, empathetic, and validating.” Hartwig tries very hard to make her account a safe space for her followers. “I feel a responsibility to use my platform for something positive,” she says. “I make an effort to post accessible resources when I find them, not just relating to mental health but about reproductive health, gender equality, protesting against injustice, [and more].” While she knows that using humor to deal with painful topics can be validating and healing, she also understands that it doesn’t provide long-term treatment or replace a mental health professional.

Overall, the question of whether these memes serve as an aid for people struggling with mental health issues can be answered with a “yes, but...” Memes, and the communities that are created online surrounding them, can provide solace in a collective struggle. And using humor as a way to connect also breaks down the stigma that is so often associated with something that so many people deal with. Hartwig notes the power of humor in relation to mental illness, saying, “I consider humor one of the most viable options to talk about mental health, generate conversation, and break down stigma.” But they’re not the only way to deal with mental illness, and they don’t substitute therapy and concrete healthy coping mechanisms.

The best way to tackle mental illness, Dr. Cooper says, is by going to therapy and talking to a licensed professional. Finding an online community to support you more informally, though, can also be powerful. There’s value in group support, and having people—even those you don’t know in real life—who have been where you are now, or are right there with you; it makes you feel less alone in an alienating illness. And that might be just what we need.