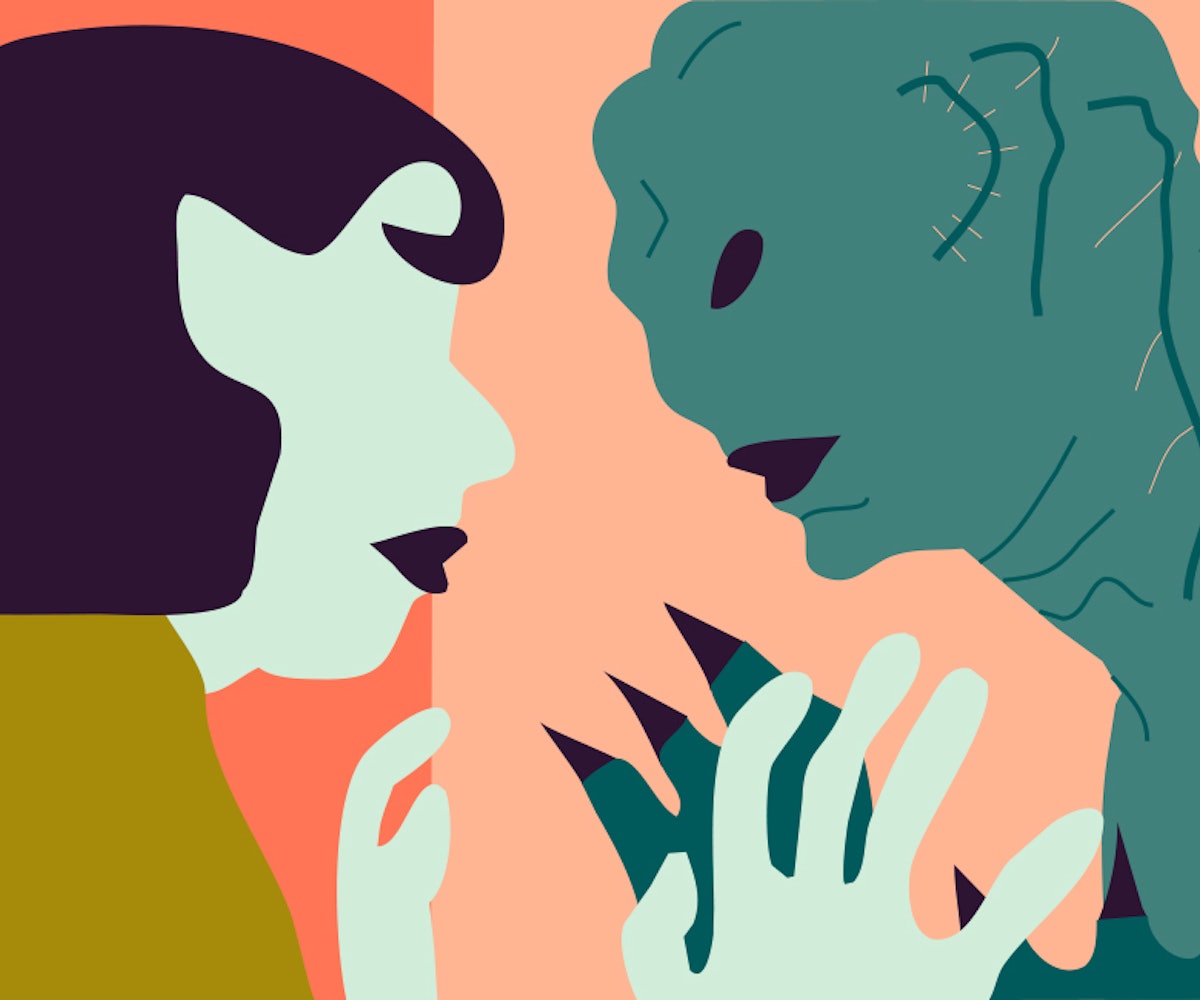 Illustration by Lindsay Hattrick
by Kristin Iversen
May 4, 2018

"I think probably he came from some archetypal ideal, what my primal and archetypal idea of a merman is, and also what would be the person who is concocted perfectly to be, at least on my end, one's dream lover," Melissa Broder said to me. "He will go down on you for hours, and he's really into it. It's sort of this primal fantasy of someone who is built to fulfill."

We were discussing her new novel, The Pisces, and the character of Theo, a merman with whom The Pisces' protagonist, Lucy, has an intense, sex-fueled relationship. That Theo is not human (though, in case you're wondering, his tail starts below his dick, because, according to Broder, "that's just how it is") does present certain problems for Lucy, but they're mostly of the practical variety, like: How do you get a merman to your house so you're not solely having sex on sea-sprayed rocks? (Courtesy of a small wagon; it helps to be in Venice Beach, California, where weirdness is the norm.) Or: Do you still need to pee immediately after having sex with a merman? (Yes, UTIs don't differentiate between interspecies sex.) And: Is it possible to plan a future with someone who lives in a place where humans can't breathe? (Um, read the book and see for yourself!)

But so: While there is certainly an abundance of practical difficulties to overcome for Lucy and her merman, one question that—intentionally—isn't addressed as fully as one might assume it would be is: Does it matter that Theo is not human? Does it matter that a woman is having sex with a sentient fish?

It's the kind of question that seems like it should be a one-off, and yet it's been asked not infrequently as of late, with countless articles about fish sex springing up in the wake of Guillermo del Toro's The Shape of Water, a film which centers around the love affair between a woman and a fish-man. And, in fact, the recent allure of interspecies sex is not limited to fish, with Jia Tolentino noting last year, in a piece titled "Beauty and the Beastiality" for The New Yorker, that it becomes clear when watching the remake of Beauty and the Beast that the monster's hirsute, intimidating physicality is not a deterrent to a young woman's love, but rather, part of the attraction, and that indeed, at the end of the film, the human prince "is a letdown."

Historically, stories centering around women and animals having sex have been tales of rape and conquest, like the myth of Zeus turning into a bull and raping Europa, or the myth of Zeus turning into a swan and raping Leda, or the myth of Zeus turning into an eagle to capture Ganymede and, you know, keeping it as his personal cupbearer and sex slave. (Zeus didn't limit himself to turning into animals; he once turned himself into golden rain in order to rape Danae.) Even beyond Greek mythology, stories about women who had relationships with animals showed that the women usually did so under duress, often because it was part of the obligation to fulfill their feminine duties, like marriage and fealty to family (such was the case in Beauty and the Beast, certainly, but also in other stories like The Frog Prince and East of the Sun, West of the Moon). The endings of these stories were usually some variation of a happily ever after, with the animal turning into a man, and the woman... getting to marry a man.

Now, though, with fewer and fewer women seeing a heteronormative relationship with a man as being central to (or even part of) a de facto happy ending, the new narratives of women and animals make clear that a relationship with a man is no longer the light at the end of the interspecies-sex tunnel it once was. In fact, what's notable about these stories is that the appeal of these non-men is not merely that they are not men (although that's a big part of it!), but more that, because they are not men, these women are allowed to be fully themselves—something that we have all been conditioned is not a safe thing to be around most men.

What this leads to in The Pisces and in The Shape of Water is a dismantling of certain norms; these women can ask for what they want, whether it is sex or respect or love. And these women can submit to a kind of abandon and release that is next to impossible to achieve when we have to constantly be on guard that the man we're with will hurt us.

This isn't to say that in these narratives—or, indeed, in similar, older ones about interspecies love, like Dorothy Ingalls' Mrs. Caliban or Marian Engels' Bear—end with anything resembling tidy, happy endings. On the contrary, they still entail a reckoning on the part of these women, an insistence that they must self-examine and determine why they're seeking fulfillment outside of the norm. In The Pisces, the way this manifests is that Lucy, through the help of group therapy for love addiction, comes to terms with why she is attempting to erase herself through love and sex. Lucy, in the end, isn't saved from men by a merman (who, in this particular case, has far too many attributes of men, in general, to be of much use at all), and is, instead, saved by the women who better help her to see and be and recover herself. As Broder said to me, "Rather than transforming or becoming something other, [recovery for me is] much more learning to sit with what is in myself. So for Lucy... these women do kind of save her life. That connection between women is what does it."

This type of salvation, one which exists outside of the heteronormative narrative, is an important advancement to the classic stories in which women are saved by their relationship with men. It's a reminder of how far we've come in the last few decades, as the needs of not only women but also the LGBTQ community and others who have long been ignored in our heteronormative, ableist society, have become more publicly prioritized. Of course, this prioritization has not come easily; it's been the product of lots of hard work and legislative action—and it's been the subject of much blowback.

At the same time that stories of women seeking merman love have proliferated, so, too, has another kind of unorthodox pairing: man and robot. This coupling has gained recent notoriety thanks to an editorial by Ross Douthat in the The New York Times, in which he suggests seeing sex as a commodity, and says that since liberals think that commodities should be, when possible, fairly distributed, an easy answer to the problems of "incels" (aka "involuntary celibates," a group of hyper-misogynist men who think women owe them sex; their numbers include mass murderers like Elliot Rodger and Nikolas Cruz and Alek Minassian). In short, Douthat says, sex robots are the world that liberals want. So why not give into it?

Douthat's piece smugly puts the blame for a future filled with sex-bots on progressive thinkers; it also does so wrongly. Though there is a strain of libertarian, tech bro line of thinking which (see: Alissa Nutting's Made for Love, in which a tech billionaire attempts to turn his wife into his own personal robot) that would probably like to see sex as a commodity, like food or shelter, feminist and leftist thought is not all together overly concerned with the fact that sexually frustrated straight men are angry that not as many people feel compelled to have sex with them anymore, and are, indeed, finding satisfaction elsewhere—including within themselves, but also with partners that stray outside of heteronormative traditions. And anyway, appeasing these aggrieved men with sex robots won't solve the actual problem, which is that all too many straight men think they're entitled not just to sex but to full control over all women's bodies.

This is, after all, the reason a certain kind of man would prefer to have a robot for a sexual partner over nothing: He needs something to control when he can't have his preferred someone. This stands in stark contrast to the type of woman who seeks out love from a fish (however allegorical). She does so because she is aware of all the ways in which men want to control her, and so she only feels safe submitting to something that isn't even human. In both of these cases, desire is clarified: Women want freedom, and men want control. These two desires are antithetical to one another, of course, but whereas women can find freedom without the help of men (and can, indeed, find freedom with the right kind of man), men cannot assert their dominance without a willing—or unwilling—partner.

And so until our society stops placating domineering, murderous men by suggesting that sex workers and sex robots take on the unenviable task of making them feel powerful, desire-filled women will be looking elsewhere, toward the ocean, perhaps, but most of all toward one another, and, also, inside ourselves.

NEXT UP
Fashion
Target’s Future Collective Gets Buoyant With Gabriella Karefa-Johnson
Entertainment
Meet Amy Allen, The Grammy-Nominated Songwriter Behind Pop's Most Honest Hits
Entertainment
Muni Long On The Grammys, Burnout & Not Worrying About The Labels
NYLON Nights
Yunè Pinku's Party Playlist Is An Ethereal Pop Fantasia
Style + Culture, delivered straight to your inbox.