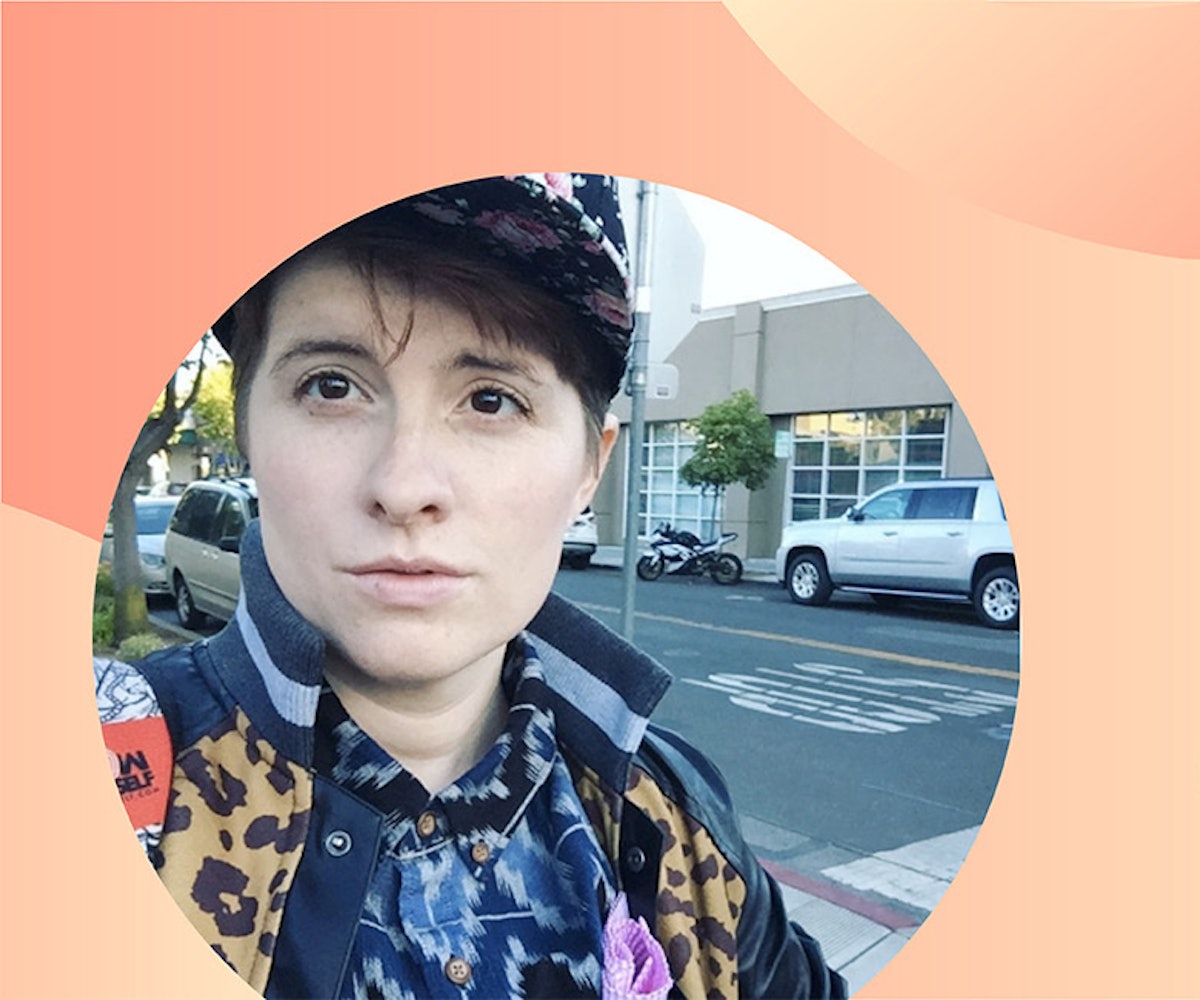 To hear Daniel Mallory Ortberg tell it, he doesn't have the kind of intensely focused work setup you might expect from someone who has published two books; run and blogged for an incredibly successful (and much missed) website, The Toast; and helms a beloved advice column, Dear Prudence, on Slate. Because when, over the phone recently, I asked Ortberg how he approached writing his just-released book, The Merry Spinster: Tales of Everyday Horror, and if there was any specific setup he needed to write, he simply replied: "When the time comes, I pull out my laptop, sit on my couch, and write. I chew some Nicotine gum. I live on that couch; I love it with my whole heart."

Sounds relatively simple, right? Like something you could recreate on your own? (Well, providing you have that kind of wonderful couch, which, according to Ortberg, is maybe "from West Elm. It's a dark blue sectional. It's where I live my whole life.") And yet the work Ortberg produces is hardly simple and is, instead, often fantastical; he plays with commonly held cultural conceptions and offers a new perspective on them, thus recontextualizing well-known literary figures and artistic tropes and making readers rethink the way in which they view the world and their place within it.

When it comes to the cultural canon, Ortberg's taste in what to disassemble and refashion in his own manner is remarkably catholic, as can be seen in his take on everything from Jane Eyre to "women listening to men in art history." Nothing is sacred, in a sense, which, in turn, makes everything fair game. And as is ever more clear in The Merry Spinster, it is a game that Ortberg not only enjoys playing but at which he is preternaturally good. The story collection consists of reimagined, but still familiar, childhood tales; authors ranging from the Grimm Brothers to Hans Christian Andersen to St. Thomas Aquinas to Donald Barthelme to, well, God, I guess, serve as the narrative inspiration for Ortberg's imagination, and he comes up with fascinating spins on tales like Beauty and the Beast, The Velveteen Rabbit, and The Wind in the Willows.

The thread connecting these seemingly disparate works is Ortberg himself, who told me that all the stories were chosen because "they felt related and connected in a way I can't explain," which, actually, makes perfect sense. These aren't, not really, stories you want to spend too much time explaining to yourself while you're reading them. They are instead something you want to feel—and you will, viscerally.

It's only later, then, after you've departed the worlds of a psychotic, murderous rabbit or a flounder who grants wishes, that you really start to think about what you just read. The immediate effect of this book is one that is slightly disorienting, so sinuously do Ortberg's manipulations of these texts work their way into the familiar stories. Perhaps the most blatant change Ortberg has made is to rid the book of discrete gender categories; daughters are referred to with the pronouns he/him, a character named Paul is referred to with she/her. When I asked Ortberg why he made this narrative choice, he said, "The stories are set up in a way that feels like play. And gender felt like another element in this book that can be played with."

And while there is something about this choice that feels like a game, or at least serves as a reminder of how based in relatively frivolous superficialities gender constructs actually are, what happens when ridding these familiar stories of their male-female binary stereotypes is really fascinating. Namely, the huge narrative burden that gender stereotypes shoulder is gone. Instead of allowing our assumptions about gender roles to serve as a sort of emotional shorthand for different characters, the reader must do additional work, and see beyond our normal, circumscribed vision. Or, as Ortberg said to me about what he realized when he switched up the genders of his characters, "If there's no fixed gender, what are other types of problems we can deal with? Like, [how about] abuse of power?"

This, then, is why Ortberg (who recently announced his own transition, including his adoption of the name "Daniel") has written a truly radical book. It is not one which is gender-blind (on the contrary, one of its most affecting passages in "The Frog's Princess" details exactly what is so hard about being a young woman: "In this country, a daughter was least safe at the age when they wished to play while other people wished to notice them"), but one which shows how nebulous the idea of gender is (the daughter uses he/him pronouns). What this does, in effect, is strip away our ability to see things without actually understanding the uniqueness of their individual contours. Ortberg clarifies structural problems, by blurring the ways in which we're used to recognizing them. He challenges the way we think about life and death, friendship and love, possession and abandonment, and makes us question not just the world around us, but how we choose to see it.

If this sounds like a lot for a collection of short stories and like maybe I'm overthinking the whole thing and should just get back to feeling it instead, Ortberg can probably relate, as he charmingly dismissed one of my questions about his intentions with a particular story, and said, "I never want to think about why I do anything, and just get praised." While it's hard to believe the first part is fully true, it's easy enough to say the latter wish will be satisfied in full.

The Merry Spinster: Tales of Everyday Horror is available for purchase, here.