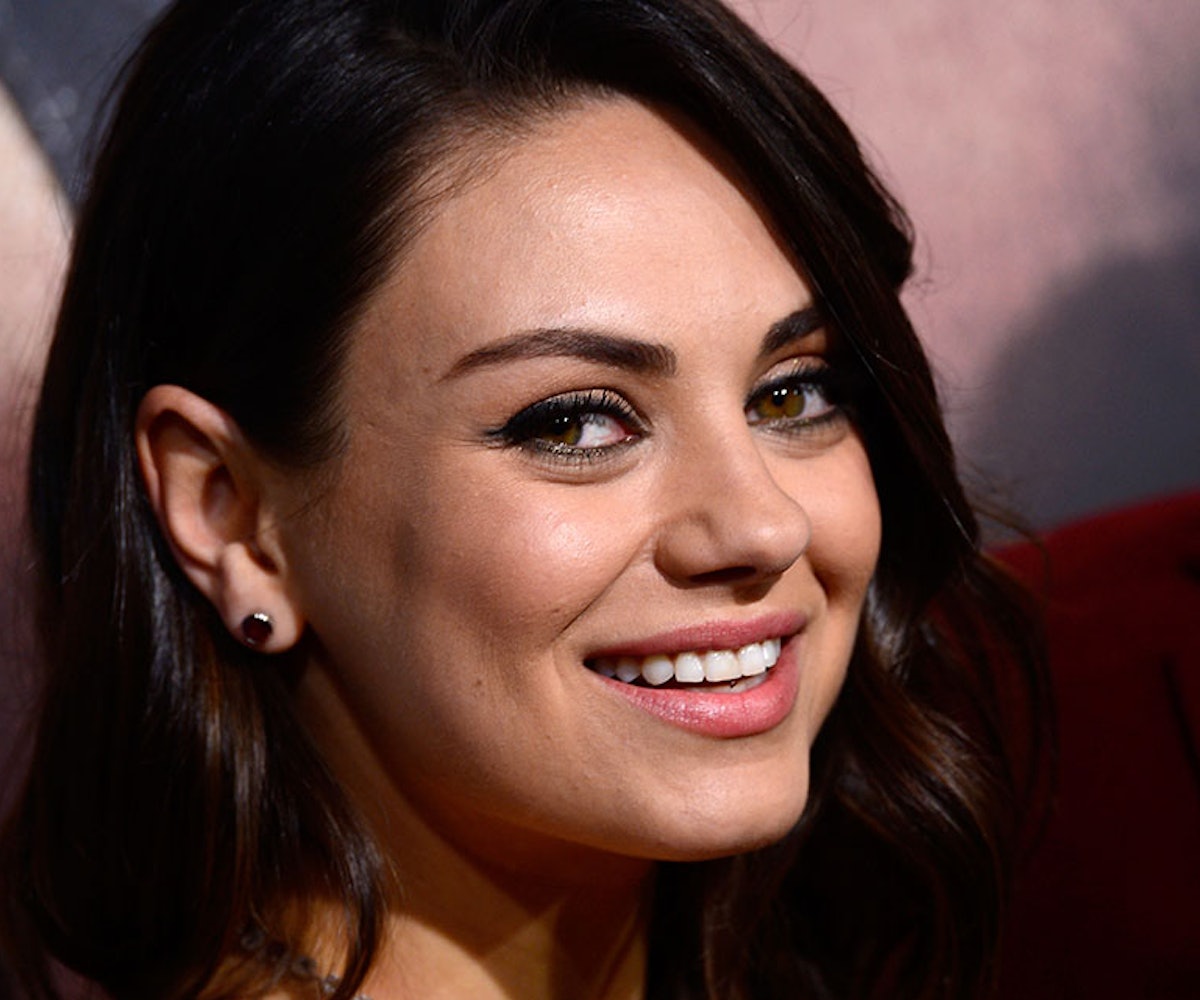 There are very few people are capable of delighting us the way Mila Kunis does. Whether she's saying sassy things, talking about her favorite cocktails, or just shooting the shit with a nervous BBC reporter, she's always surprising us. So, to no one's surprise, her Reddit AMA was full of wonderful revelations that made us wish we were BFFs with Kunis (our '11 interview with her just wasn't enough). We've compiled some of our favorites below. Prepare to gush.

Mila and Ashton's daughter, the adorable Wyatt Isabelle Kutcher, was the most life-changing experience of her life. "I am proud to be a stay-at-home mom," she wrote. "I have no desire to be in front of the camera. I find her to be the most challenging job I've had. The amount of love that you have, the type of love that you have, changes, the way you look at the world changes... everything has changed, because of her. I want an eco-friendly car, I want to compost everything, because I want the world to be better for her. And you have the opportunity to make a really great child for the world. Or a really great human being." In case you're wondering, Wyatt will be raised to speak Russian and English and Ashton is also taking Russian lessons.

The person who made her laugh the hardest while working (ever) was Wilder Valderrama on That '70s Show. And at the time of That '70s Show, Kunis didn't think about the show's success. "You know, at 14 years old, you don't really contemplate success and that aspect of work, you kinda do things because it's fun to do," she wrote. "We had an amazing crew and cast, and I had the best 8 years of my life on the show. It's not something you can force, it's either something that happens or doesn't. Yeah!"

There are two people that both Ashton and Mila have kissed: Natalie Portman and Zoe Saldana. Kunis on Portman: "she's a lovely kisser, very polite."

If you want to win Kunis' heart, you have to be funny. Like most women, she believes the most attractive quality is a sense of humor. If you have this and you want to take her on a pizza date, take note: "I genuinely love an all-veggie pizza. I don't love pepperoni, not a fan, and I don't like all-cheese. So for me, veggie or a short-rib pizza that a place near has that I love," she said. "I really like BBQ Chicken, but I know that's sacrilege. And I really like super-thin, burnt-burnt-burnt crust. Like extra crispy."

The Jupiter Ascending star is a huge nerd that used to play World of Warcraft. "I played a LOT," she said. "I was in a guild, I led raids, I was a pretty badass mage. I had multiple characters. I was a frostmage, I think, by the time I stopped playing? But no, I stopped playing when everyone started having children. I was level 70, I quit at level 70, before the expansion pack." Bummer.

She, like just about everyone else, loves Game of Thrones. She said about her Jupiter Ascending co-star: "Sean Bean was great! Huge fan of Game of Thrones! So bummed Ned Stark got murdered! So happy to work with Ned Stark! He's the chillest person ever. He's like... just a normal British guy whom you can just shoot the shit with."

Mila watches The Bachelor and loves it. "I guess the only thing I have to watch is The Bachelor?" she said. "But that's so depressing. It's the first season I'm ever watching it. But it's so addictive. I mean, it's unbelievably addicting. In all 15 seasons or so they've done this, I've never sat down to watch it. But now - oh my god, these women are crazy!" Agreed.

Kunis, whose first language is Russian, dreams in English. But that didn't happen until later in life. "When I learned to speak English fluently, my dreams changed to English," she wrote. "Strange, right?"

Kunis used to have two different colored eyes. "After my surgery, I have a glass lens that was put in my eye," she said. "I now have the same color eyes!"

If she could tell her 14-year-old self anything, it would "to relax and not rush it."

If she could create and teach her own college course, it would be "How to be an awesome, badass chick who knows how to take apart & put together a gun blindfolded, make a four-course meal, and parallel park the shit out of a car." We'd sign up for that.

"I love cereal that tastes like cardboard," said Kunis. "Yes, I know it's weird. My morning cereal is Chex, Almond Milk, and then I put in a bunch of berries - without fail!"

Meg Griffin (Family Guy) is more misunderstood that Jackie Burkhart (That '70s Show) because, in Kunis' words, "Jackie was fine. Jackie got around. Meg? Not so much."

NEXT UP
Life
44 RIDICULOUSLY USEFUL THINGS UNDER $25 AMAZON REVIEWERS SAY THEY CAN'T LIVE WITHOUT
Life
NYLON Newsletter: October 3, 2022
Life
Read An Exclusive Excerpt From I’ve Had To Think Up A Way To Survive: On Trauma, Persistence, and Dolly Parton
Life
On Repeat: Vaquera’s Away Collaboration Is Brought To You By Britney Spears B-Sides