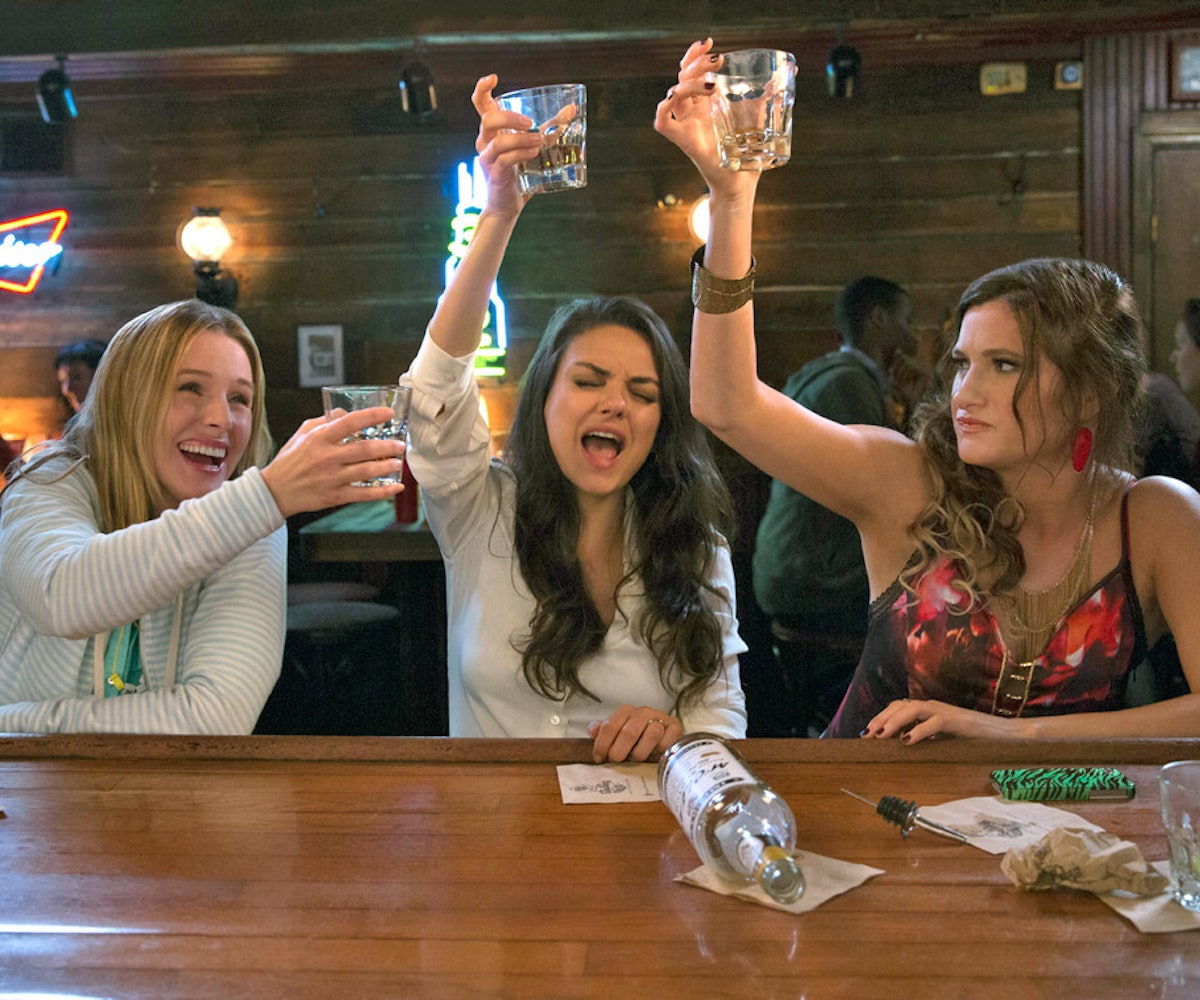 Moms aren’t usually the funniest characters to be depicted in films. More often than not, they fall into the neatly packaged stereotype that places them in the kitchen, doing laundry, and/or driving a minivan full of kids. But anyone who is, has, or knows a mother is aware of just how sterilized those depictions are. Thankfully, Bad Moms is here to show the realistic side of motherhood and, trust us, it gets pretty damn wild.

Out today, the movie follows Amy, played by Mila Kunis, on her quest to fit in with the perfect housewives of the PTA at her son and daughter’s school. Faced with having to juggle her job, taking care of her kids, and dealing with her recently failed marriage, the last thing the young mother has time for is to bake sugar- and gluten-free cookies that meet the standards of the Mean Girls-esque women of the PTA, led by Gwendolyn (Christina Applegate). Exhausted and fed up, Amy decides to take matters into her own hands, cutting the umbilical cord from her kids and running for PTA president with a campaign for all the real moms, backed by Kiki (Kristen Bell) and Carla (Kathryn Hahn), two other mothers who don’t quite fit into the cookie cutter mold of the organization. Between Amy’s fumbles, Gwendolyn’s neurotic dictatorship, and a scene that features the moms grocery shopping while borderline shitfaced, Bad Moms is sure to leave you laughing until you get stitches in your sides.

Here, we chat with Kunis and Hahn about what it’s like to be a bad mom—both in the film and occasionally in real life—the environment on set, and how annoying it is that comedies with nearly all-female casts are still seen as anomalies.

So I just finished watching the movie and, I have to say, I was laughing the entire time.

Kathryn Hahn: Oh, yay. I haven’t watched it with a big group of people yet. I cannot wait to hear the audience laughing at it.

What were your first thoughts when you read the script? What drew you to the movie?

Mila Kunis: I read the script because a girlfriend of mine gave it to me. I was like, “Oh my god, this is a great movie.” It’s just the perfect time to make it considering everything that’s happening, with the exaggeration of the mommy blogs and information and everything. So I read this movie, and I kind of put it aside. Three months later, I got a call like, “Do you want to be a part of it?” I met with [writer] Jon Lucas, and I was like, “This is such a great movie. I cannot believe you wrote it. Thank you, first and foremost, and secondly, I’d love to be a part of it.” Now, two and a half years later, we’re all sitting here promoting this movie.

KH: One of the writers, Scott Moore, his child and my child go to school together. I knew him from writing The Hangover, but we really weren’t even pals at that point—our kids just went to school together. At some point, he emailed me like, “Please do not let this ever be weird between us. Would you ever read something that I wrote? I can’t say that I know it’s happening but would you be into reading it?” I was like, oh my god, yes. It was hilarious. And so specific. It’s funny because you meet Scott and Jon, and you would not imagine that this came out of the two of them. That they have these vibrant, crazy, specific, beautiful voices inside of them because they’re so quiet—gingham shirt tucked into khaki pants kinds of guys. I wanted in, of course, because I was so excited to see the idea of motherhood upended like this, to see it kind of flipped in this way. It just felt incredibly exciting and fresh to see the trope of motherhood—which is often so basic—to be seen for what it can be and what it is.

It definitely makes motherhood look way more realistic than we typically see it in film.

Considering you guys are both moms, have you had any “bad mom” moments with your own kids?

MK: Oh, yeah. I used to visit my husband at work and [my daughter] Wyatt was a couple of months old at the time, and traveling across the state with an eight-month-old is like traveling cross-country. So I pack the car up, and everything is great and we’re happy. We start driving down the 1-10, and I’m like, “Woo I did it!” And she’s really quiet in the backseat and I look in the rearview mirror and realize that she’s not strapped into her car seat. I’m driving down the 1-11 downtown, and I’m like, “What do I do?” So I calmly pulled over and buckled her in, and I swore to myself that I would never tell a single soul about this story ever again. I pull up to my husband at work, and he’s like, “Hey!” Then I literally just broke down and started crying. So, that happened.

KH: One time my son was crying so hard. I changed his diapers, and it turned out that one of my hairs had wound itself around his balls like five times. But I have so many of those moments. Sometimes, you’re like, I’m glad the kids are breathing, that they’re alive another day. Thank god.

What was one of the funniest scenes to shoot?

MK: For me, the funniest was watching Kathryn guzzle milk in a supermarket when it was 20 degrees outside. I couldn’t stop laughing at how amazing and how much of a trooper she was.

KH: That [drunken shopping] scene in the grocery store was pretty fun.

MK: It’s also on my wish fulfillment list. Grocery shopping, to me, that’s my happy place in life, so to be able to do that was heaven.

I went grocery shopping with my friends after boozy brunch one time. I highly recommend it.

KH: Oh, totally! I remember being with a bunch of pals back in November, we were so drunk. We went to a movie and dinner, and we were like, “We should go Christmas shopping for our kids!” I was like, “Wait guys, let’s think about this. Because we’re going to go home with the most random presents for our children.” So we didn’t. But it would have been fun.

Maybe another year. What are your favorite memories from being on set?

KH: This movie was such a pleasure to shoot with these ladies. I felt such a fondness for being in the makeup trailer in the mornings and being able to spend time with Mila’s daughter. It took a second, but finally, I gained her trust enough to hold her a few times. She took some of my grapes. That made my life. She’s such a little cutie, and she’s gorgeous. So I have sweet memories of being in the makeup trailer.

MK: I tried to make Kathryn’s daughter laugh. She told me I’m not funny.

Both the Ghostbusters remake and now Bad Moms are getting attention for being comedies with women as the main characters. What do you make of this trend and the spotlight that’s being put on women in comedy?

MK: Here’s the thing: I think that it’s shocking that we’re still in a place where we’re like, “[gasps] Women being funny! They can sell a movie!” That’s crazy. I feel like men don’t have that issue. If a movie fails, if a movie succeeds, it has nothing to do with the fact that a man is in it. But somehow if females are in a movie, it’s like, “Well, it’s a fluke that it did well.” Or if it didn’t do well, “Next time, this is going to be really hard to greenlight.” It’s actually really unfortunate that a movie isn’t being sold on the fact that it’s just a funny R-rated movie, female [cast] or otherwise. Putting it into a quadrant, it’s unfortunate because I feel like it’s such a multifaceted film. My husband loved it. Men may or may not need an excuse to see it but, boy, I promise you, when they do see it, they will love it. It’s genuinely funny. And not because women are in it. I hope people stop having that gender bias and just go see the movie because it’s great.

KH: And I’m sure you as a woman, after a while, get annoyed that you have to keep asking these questions. It’s unfortunate that it’s still a benchmark movie—if this does well, then maybe [others] can happen. There’s something about it that feels like this is what people are craving to see. It feels fresh and now, and people will seek out the storytelling, regardless of who’s doing it.