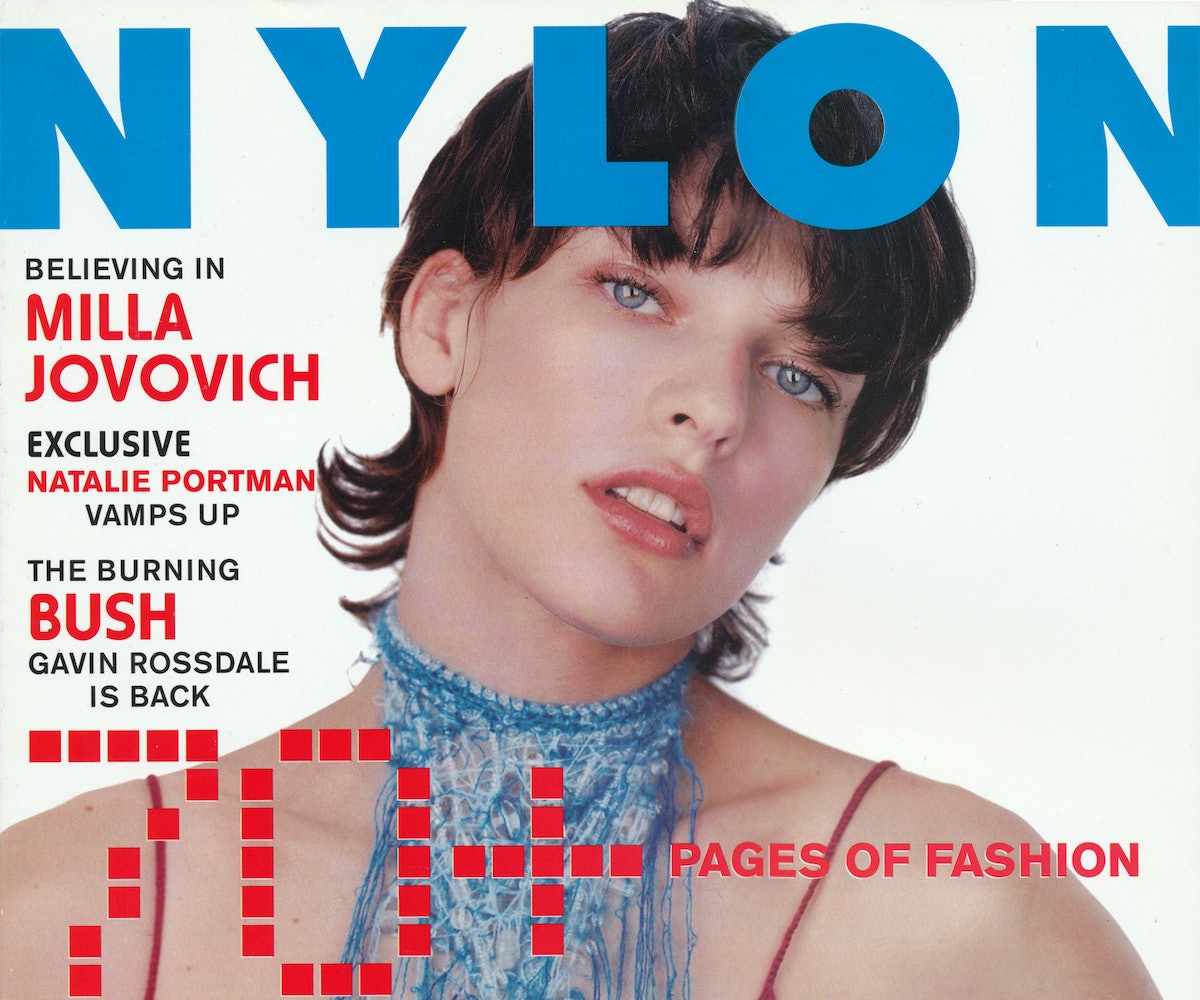 Our weekly Flashback Friday just got a whole lot cooler. We're still posting some of our favorite covers from past issues of NYLON, but now you can go even more in-depth with our faves by reading the cover stories in their entirety! Yep--consider this your really rad trip down memory lane. This week takes us to November/December '99, when our cover star, Milla Jovovich Barton, talked with writer Seve McDonald about The Fifth Element, books, boys, and being an epic multitasker.

Check out the full article below and the photos in the gallery.

"I have had some really great spaceship dreams," confesses Milla Jovovich, her mouth in a permanent pout, her opalescent eyes hypnotic. "Being shot up in a capsule and ending up flying, out in the universe, over the most beautiful landscapes. It's so intense. I have crazy dreams all the time."

In dream-speak, flight means transformation, finding your independence. Soaring out onto our big-screen landscape from the capsule of her relationship with French director Luc Besson (the two married after working together on

and are currently separated), Jovovich is emerging in the solo flight of a real artist. It doesn't take a Jungian therapist to see that.

Cross-legged on the floor of a dark, air-conditioned Hollywood recording studio, Jovovich is wearing an Army-style camouflage tee, black industrial Prada sandals, khaki shorts, and no-makeup. She may be trying to a "casual" impact, but that's just not possible. As she proved so unforgettably in

(wearing nothing but a Jean-Paul Gaultier Ace bandage), the actress-model-musician's beauty is about low-key as a car alarm.

Jovovich has been acting since she was 12 in a career that includes,

. Yet it wasn't until The Fifth Element that she started taking herself seriously as an actress. "Working with Luc Besson [

] was such an education for me," she explains, running her hand through her famously choppy Louise Brooks bob. "Before that, it was like, something I have always done. After that, it became something I needed to do."

This month, the Russian-born Jovovich stars in

The Messenger: The Story of Joan of Arc-

-a role that has Academy Award consideration all over it. Besson was so convinced of his wife's talent and affinity for the role that he pulled out as the producer of an earlier version of the film where director Kathryn Bigelow wanted to cast Claire Danes. Instead, he decided to direct the epic himself with Jovovich in the lead. Sometimes a little faith can go a long way.

"He always gave me the best advice for everything," Jovovich says of her ex, wrapping her arms around her knees and pulling them to her chest. Despite their recent breakup, the modern-day Barbarella still gushes over Besson. "I had so many insecurities. You know? 'I am not talented,' 'Why am I an actress?' He said, 'As long as you're honest, you can't go wrong.' I could be the biggest dork, but if my dorkiness is what I give the world, that's honest, that's important. I tell myself every morning I have to be honest and that is the most I can be."

All this praise for Besson; what went wrong? "We aren't together," is all she'll say, casting her glance to the ground. She will say that acting has changed her life. "You can never be the same person after you've seen yourself through someone else's eyes," she says of the creative process that allows her to become a different person.

When Jovovich was 11 she made history as the youngest girl to ever appear on the cover of an American fashion magazine. The magazine was

. The photographer was Richard Avedon. The year was '87. She appeared on 15 covers that year.

named her one of their 50 Most Beautiful People. She was still collecting stuffed animals and wearing a retainer.

At 16 she moved out. "I spent all that time living at home going out to parties and clubs; as soon as I got my own place I didn't go anywhere." The actress describes her first apartment as "pretty conservative--a bunch of antiques and Monopoly games on Sundays." (She likes to be the shoe, and not the banker.) Six months later she eloped to Vegas with her then-boyfriend; three months later her mom had the marriage annulled.

When Jovovich was five, she moved to Hollywood from Russia, where her mother Galina, was a successful actress. Her father, "Bogie," a doctor decided it was a good move for his career. Milla had already started memorizing and reciting four-page-long Russian poetry in the living room. The kids at school called her "commie." Her mom enrolled her in acting classes.

The Jovoviches were not religious. They went to church occasionally, "but that just wasn't a big part of our lives," she remembers. "I can't say that I believe in God for sure, but I can say that I believe in the human brain." What was important to her family was hard work and intelligence. She became an avid reader. Dedicated to her favorite author, Gabriel Garcia Marquez, Jovovich had read

One Hundred Years of Solitude

"The fact is there are people that are religious and people that believe. When you believe in something, everything you do becomes empowered with force and humanity," she explains, interlocking her fingers between her exposed glossy red toes. "Joan's greatest quality was her ability to believe."

Jovovich believes in the future, what we cannot yet see. She is currently making her way through the

, a book which links mysticism with science. She feels sure in the next few hundred years that we will abandon cars and cell phones for a more advanced form of communication and flight.

When someone travels beyond their limitations, she calls them a "Space Person." She keeps a file: Voltaire, photographer Diane Arbus, and Jodie Foster (and not exclusively for the film

, which Jovovich loves). She was born under the sun sign Sagittarius. Which, if you believe in that kind of stuff means that she, the archer, likes to set her sights on an objective, then focus, point, and shoot. Whether it's this, or maybe her Russian roots, the actress works hard at everything she does.

Eight months of training in karate, acting, and dance made Jovovich a fantastically kick-ass love interest for Bruce Willis in

, she worked for four months with a horse trainer and voice coach. "I worked hard but it was worth it."

was a dream project, the creative offspring of the Jovovich/Besson relationship. The impressive cast includes John Malkovich, Dustin Hoffman, and Faye Dunaway. The film took nine months to shoot.

"We wanted people to relate to her as a human being," Jovovich says. "I think that is important for a story like this, so mythological. Hopefully you will be there with her and be able to imagine yourself doing the same things."

Leelee Sobieski might be able to boast that she was the first real-life virgin to play Joan (in the television mini-series), but Jovovich will make film history as the second actress to play

under the direction of her husband. Roberto Rossellini directed Ingrid Bergman in the role on stage and later on film in

Giovanna d'Arco Al Rogo/Joan of Arc At the Stake

. (In 1948, Bergman was reportedly having an affair with Victor Fleming, while making their version.)

In the past, Jovovich has said that her modeling career has allowed her the financial security and the freedom to be selective about her movie projects. (Yes, by the way, the L'Oreal model does use their make-up. "They have really great foundation. I have been using it a lot. I use their mascara. I use their smoky eyeliner. Their big fat pencils are cool. They look like my mom's from the '80s.") Regarding her process for choosing roles, "I am trying to listen to my intuition more. When I read a script, a lot of the time there is just something I feel about it. Like this movie I just did,

with [director] Wim Wenders. I just knew I could play that part."

These days, Jovovich spends most of her time locked up in this recording studio rehearsing with her band. "I always need to feed myself books, music, script. Right now I want to put my energy in the music." Her first CD,

released on EMI in '94, was pre-Lilith Fair ethereal. Her new band, Plastic Has Memory, is more PJ Harvey than Sarah McLachlan, and they recently opened for Remy Zero in Los Angeles. She writes all the lyrics and play guitar. The band hopes to record an album for Virgin at the beginning of the year.

She also hears voices. Not God's, but the thick Russian accents of her next-door neighbors. It seems the walls at her L.A. apartment are thin (she also has a loft in Chelsea, New York). "When I was shooting

it was all night shoots," she recalls with a roll of her fantastic eyes. " I would go to work at six and get home at nine, nine-thirty, and have to sleep all day. And my neighbors, they are like, 'Where are my socks?'" Jovovich yells at the top of her well-trained lungs. "'Why the hell are they in the right drawer?!'"

Back-to-back films, omnipresent voices, albums to record, nocturnal flights, breakups, and quantum physics to contemplate--it's a wonder this girl gets any sleep at all. -- SEVEN MCDONALD