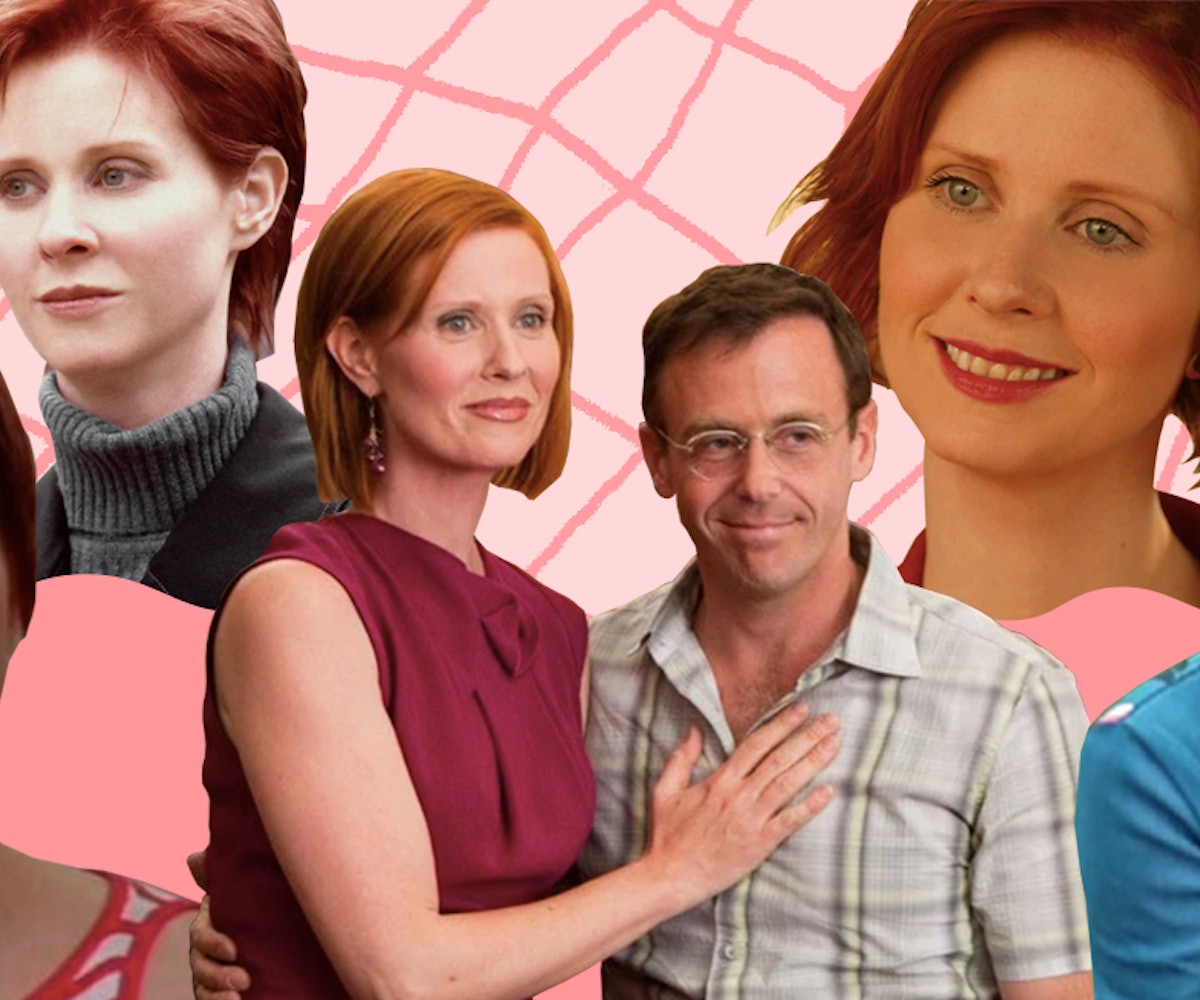 For many Sex and the City fans, being labeled a Miranda is like getting stuck with being Michelle in a Destiny's Child group costume. Michelle's fine, but you'd much rather be the Beyoncé of the group (sorry, Michelle). Unlike the other SatC leading ladies, Miranda never seemed to have all that much fun and was more work than play. After all, she doesn't have uninhibited sex like Samantha (though she does have plenty of it). She doesn't have a closet full of designer clothes like Carrie (overalls and pantsuits are more her thing). And she doesn't have dreams of finding “the one" like Charlotte (more like “someone"). Miranda is cynical, doesn't hold her tongue, and will sometimes pretend to be a lesbian to get ahead at her job. She's the responsible one, who buys her own apartment earlier than everyone else; she's the mom of the group. All of these things combine to make Miranda something less than aspirational in the fun, carefree sitcom way—but totally aspirational in a real-world, self-empowered way. Which is maybe why, now, she's finally getting her due.

In 2018, it's cool to be the Miranda of your group of friends. It means you're socially aware, don't take shit from men in your office or love life, and sometimes eat cake out of the garbage because: fuck diets. “We should all be Mirandas!" we all scream, and plaster across our chests. Where she was once seen as bossy, she's now viewed as assertive. The “stuck-up" label is replaced with “knows what she wants." In today's times when women feel more and more emboldened to speak out and lean in, we're all finding our inner Hobbes. “I think the fact that she was more focused on her career over men was seen as unappealing when the show first aired, but now there has been a shift where women don't feel like, if they don't find a finance bro to marry, their lives won't be complete," says the anonymous user behind @mirandamondays. “It's like, 'No, the fuck not!' Now, you can have a bomb-ass job and find your love later, when it's convenient for you."

It's hard to pinpoint when, exactly, the shift started taking place; perhaps it was when people started realizing that spending $500 on a pair of shoes isn't as satisfying as being named partner at a law firm, but it was probably around the time Hillary Clinton lost the 2016 presidential election to Donald Trump. Since then, women have emerged to march and to call out men for their despicable behavior—things that feel very in line with Miranda. When you visit the @mirandamonday page, it's filled with pictures of the character and some of her most notable lines, like, “I want to enjoy my success, not apologize for it." And: “Men are shit." And: “What I want is to get laid. What I need is to get laid." A true 2018 feminist formed in 1998. “I think Miranda has become this incredible example of the power that independence can give you," the @mirandamondays founder reflects. “You should be able to make your own decisions and live your life however you want, I think there's no better mascot for that than Miranda."

It's hard to disconnect a celebrity from their character, but maybe that's not necessary in the case of Cynthia Nixon. She announced she was running for governor of New York in March and is poised to become the state's first female and openly gay governor. “I don't think anyone would disagree that running for Governor was like THE Most Miranda thing to do," says @mirandamondays, who believes Nixon's depiction of Miranda will only help her campaign. “I think Cynthia Nixon herself is such an iconic, strong, intelligent, and progressive woman… her politics speak volumes and share the values I know Miranda would have if she were IRL. I can't imagine a better way to help a reputation, to be honest." And while we'd like to think all four ladies would vote for Nixon if the show were still around (maybe not Charlotte, unless we're talking woke Charlotte), we have no qualms concerning who our favorite underrated character would cast her ballot for. “Imagine if Miranda was real, you better believe she would be backing Cynthia Nixon!" @mirandamondays declares.

I took a BuzzFeed quiz recently—you've probably taken it, too. It's titled “Which Sex And The City Character Are You?" As is the case with most of these quizzes, I knew who I was going to get before it gave me my results. What I wasn't prepared for was the little blurb that went along with it: “You got: You are a Miranda!" it read. “You WISH you were a Carrie, but alas, you are a Miranda." What it should've said, though, is: “Congratulations, you're the friend who most has their shit together! We should all strive to be a little more like you." There, BuzzFeed, I fixed it for you.