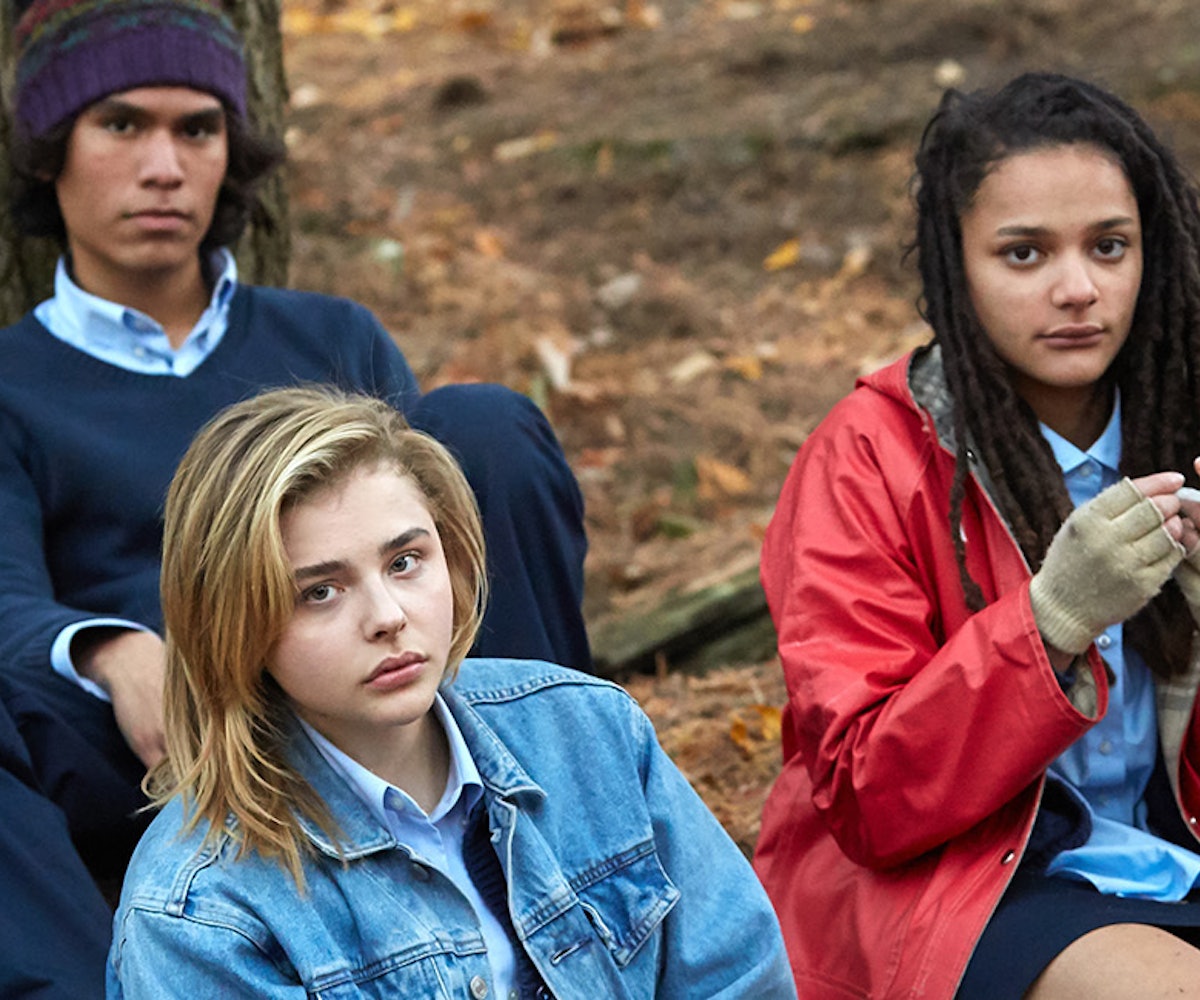 So it’s all the more noteworthy that in Akhavan’s second film, Sundance prizewinner The Miseducation of Cameron Post, the scenes in which teenage girls discover their desire are far less cringeworthy than the scenes featuring adults in her last movie. There is no emphasis on the clumsiness of inexperience, or “sloppy appetites […] bodily excesses and excretions” Times critic Dargis found wanting in Blue Is the Warmest Color’s depiction of teen lust. As evangelical high schooler Cam (Chloë Grace Moretz) takes her first bites out of the apple, the usual trembling teenage excitement and confusion and fear of rejection gets an extra edge from a more specific sense of religious guilt and secrecy and fear of the unknown—and Akhavan makes the film a safe space for all this. The framings are intimate, the dialogue is whispered exchanges between kids seeking not so much consent as reassurance. There is a sense of high-stakes vulnerability that makes the scenes, well, quite romantic—an idealized depiction for an audience of relatively young people with relatively grand ideas about what sex might mean to them.

Alas for Cameron Post, the film is a safer space than her fundamentalist community, and after her boyfriend catches her and her girlfriend in the backseat of a car, she’s sent off to Pray the Gay Away at a remote pseudo-boarding school overseen by Jennifer Ehle in full-on evil-governess mode, and a mustached John Gallagher Jr. as the kind of youth group leader who plays ping-pong and guitar. Christian high-schoolers “struggling with same-sex attraction” are subjected to bed checks, prayer, and individual and group therapy, in which they’re required to self-analyze the root causes of their own weakness. One of the sarcastic kids (there are the self-loathing true believers who still want to “get better,” and the ones who want to survive) explains to Cam that if she’s not sure what to write, she should write something about her relationship with her parents, everybody does—it’s a sly, sad moment acknowledging the genuine unresolved traumas that have led these kids to this place, and the real potential for lifetime scarring.

The film, like the six-year-old YA novel from which it’s adapted, is set in the fall of 1993. This sets the stage for a technically perfect Columbia House joke; it also means that the film’s address to viewers who weren’t alive in 1993 is less about presenting a relatable model for defining a queer identity, or recognizing prejudice, than it is about evoking a more generalized spirit of rebelliousness, wrapped up in frustrated desire and youthful idealism—a conviction that teen horniness is not a crime, wild hearts can’t be broken, and various other eternal clichés which vibrate at one of those frequencies that just hits young ears differently.

In the past, Moretz has given performances which feel a little too polished, pouty, pose-y—a common-enough issue for child stars, though here she’s sullen and withdrawn like, well, an authentic child: frog-mouthed, wide-eyed and slow to speak, so you can’t tell if she’s paying intense attention or off in a daydream (most likely both). It’s a fine, cloudy-brained performance that gives you the sense of someone processing things in panicked slow-motion as the world whips by, and a worthy successor to Jena Malone as the pregnant Christian Jewel in Saved!

Yet Akhavan struggles to make us believe that Cameron is seriously wrestling with any internal conflicts, with any religiously instilled self-doubt or self-loathing—her own spiritual convictions are age-appropriately ambivalent, she only seems to really locate grace in her memories of her girlfriend, and the film stumbles when it dips in and out of backstory or supporting character arcs to try and weave together some empathy for its devout characters. Mostly Cam seems to feel lonely and victimized, as she is objectively correct to do.

Saved!, released as the 1990s end-of-history culture wars that make up Cameron Post’s ambient backdrop receded into a new century of real war, was certainly no more convincing about its milieu. Still, it had a campy flair courtesy of Mandy Moore, who, lest we forget, was absolutely filled with Christ love—the movie played less as an everybody-has-their-reasons human tragedy than a bitchier It Gets Better Message, and though Cameron Post doesn’t come as close to breaking the fourth wall, its appeal is similar in the way it flatters youthful passion and black-and-white indignation. Teenagers are prone to feel sentimental, horny and self-righteous, and this movie is certainly a potent hormonal cocktail.