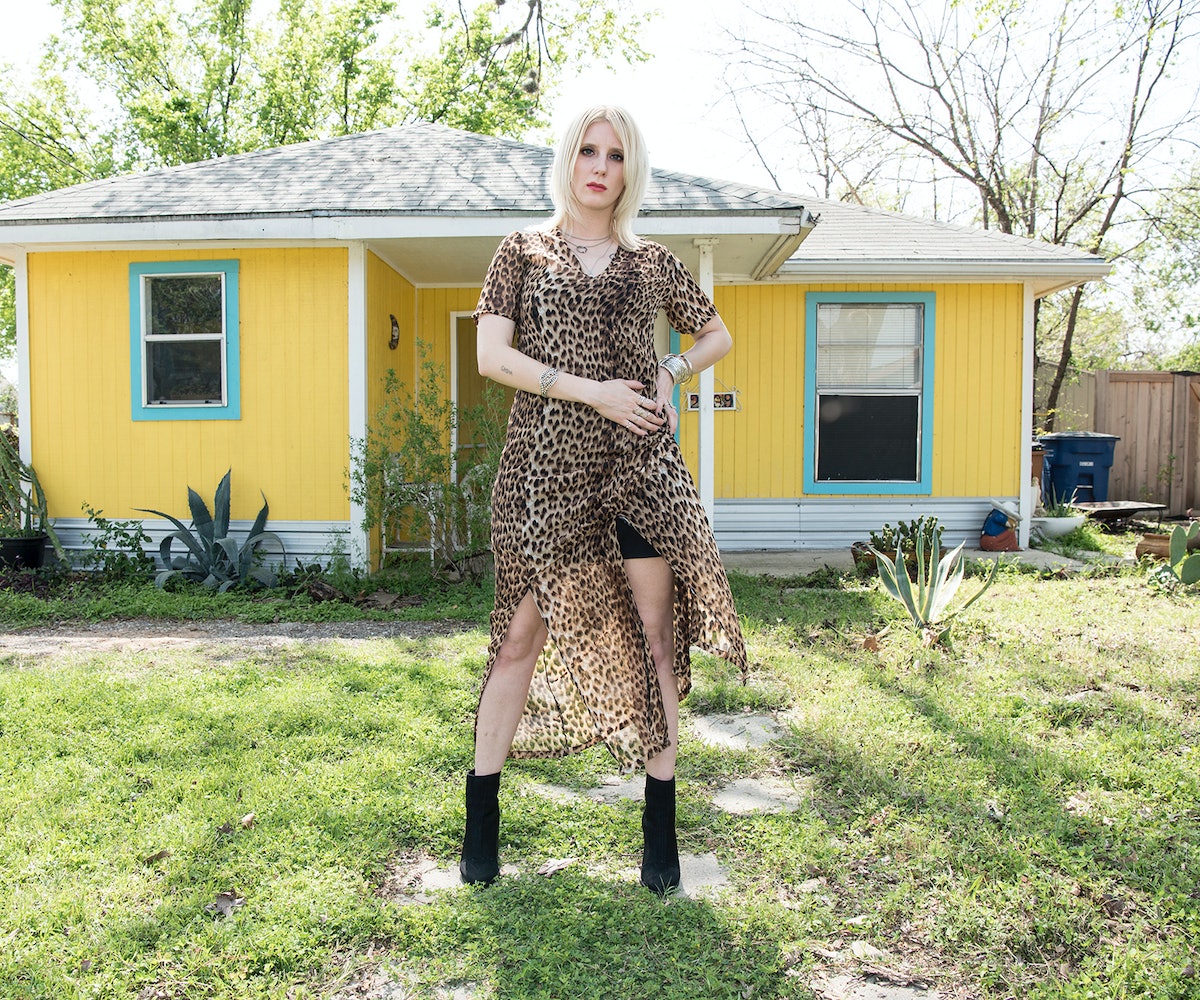 There’s a moment on the song “Sister” when Mish Barber Way, leading lady of Vancouver punk trio White Lung, snarls, “We will submerge you into garbage/ I swear I’ll miss all of you.” The track is far from being about the singer’s own sibling; rather, it’s told from the perspective of Karla Homolka, who helped her husband murder and rape three girls—including her own teenage sister.

Off-stage, Barber Way doubles as a journalist, investigating stories on everything from sexual politics to homicide. Given the lack of drama in her life while writing the band’s fourth record, Paradise, due out on May 6, she decided to explore the psyches of societal outcasts. “Two songs are written from the perspective of female serial killers, because I was doing a study about it,” she explains. Overall, the album is a lean, 29-minute ride that’s rich in new-school guitar tricks. “What’s the modern punk instrument now? Computers,” says Barber Way. “There’s not one synth on Paradise. I also wanted to prove that I can actually sing and not just holler. Often on punk records, vocals are an afterthought.”

Given her fascination with certain news stories (“Two of my favorite reports last year were about women who’ve had sex with animals,” she says matter-of-factly), Barber Way is no stickler for self-censorship when it comes to her inspirational heroes. “I hate political correctness. It’s fucking stupid. The Internet has provided this constant mirror,” she says. Her muses include Camille Paglia, Jim Goad, and Joan Rivers—all renowned for being fearless beyond reproach. She once interviewed the latter: “[Rivers] was a goddamn fucking genius,” says Barber Way. “She talked to me about how no one will hold the door for you. She had a real cutthroat attitude.” Here, the singer and journalist gives us a rundown of other outspoken figures who inspired her own voice.

“Dinah Washington was a female jazz vocalist best known as ‘Queen of the Blues.’ My grandfather showed me her album Back to the Blues when I was a teenager, and I fell in love with her music, her voice, her whole life. No one sings with the same power. She did not give a shit what people thought of her. She had so many men mooch off of her success—she had, like, nine husbands. A notorious diva and hard worker. She was a big lady with a pocket full of pills and even more secrets. Amazing style in every aspect of her being. She always wore fur and crazy wigs. I just love everything about her, but especially her music.”

“Paglia is one of the most brilliant, dissonant feminists and cultural critics still writing today. I am very inspired by her discipline, intelligence, and attention to religion, history, and art. She is my favorite feminist author.”

“In the ‘90s, he and his then-wife Debbie Goad published a zine called Answer Me! that was like the Hustler of lifestyle magazines, only because of how many politically correct people it pissed off. The Goads once said they targeted against the reader; they hated everyone. Besides all of that, the writing was so good. Jim’s a megalomaniac with mild Asperger’s, so he has scanned and uploaded every old article, no longer available, onto his website. The essay he wrote about the woman who sent him to jail is my favorite. Also, the one about his mute brother who was murdered in Paris. The Redneck Manifesto, The Headache Factory, all of his books—I love them all. He’s the least boring, and most prolific and original writer. He never folded to anyone’s pressure or influence. Normally, an ego his size would turn me off, but Goad is intelligent enough to be that hotheaded. Facts, not feelings.”

“It’s hard for me not to admire someone who built one of the most impressive lifestyle empires in the world. I grew up reading Martha Stewart Living. My mother loves Martha and I do, too, by proxy—my mother bought me her cookbooks and wine glasses. I respect Martha’s no-nonsense attitude. The woman modeled for everything from cigarette companies to Chanel to put herself through university. Have you ever seen photos of her as a young woman? She was gorgeous. Yeah, it’s rumored that she’s hard to please, but you don’t get ahead being a doormat.”

"I've admired Mr. Flynt for years. I finally got to meet the guy this year and I was too chickenshit to snag a business card from the solid-gold holder on his desk. Can you believe that? They were too perfect! But seriously, the former Hustler editor Bruce David once said that Flynt wanted to 'make America a better place by using the First Amendment and his right to free speech to champion people—[particularly] the working class. And he wanted to do this without embracing the political left or right.' That there is why I love and respect Mr. Flynt."

"Listening to Fleetwood Mac taught me how to really sing, not scream—I learned that from Kat Bjelland—but just sing with that same power. Stevie Nicks showed me how to be earnest and not hide behind cynicism,"

"Can you tell I like people who refuse to pander to the politically correct? Rivers was the most powerful person in comedy. No one compares. She was so ambitious and worked her ass off. I got to interview her a few years before she died. I was nervous. I never get nervous interviewing people, but Rivers’s approach to her career and celebrity is so inspiring. A true professional. No one was as self-disciplined and committed as she was. I could go on about Joan for days.”

“I’ve now met a lot of people I admired when I was younger. I always thought [Royal Trux’s Jennifer] Herrema was so original with her singing and her style. She remains one of the coolest, kindest people I have ever befriended. The more I get to know her, the more I respect her. There’s no one like her. She is a true freak.”

“If I could die and come back as a man, I would want to be Richard Hell.”

“Scratch that. I would come back as Lemmy.”