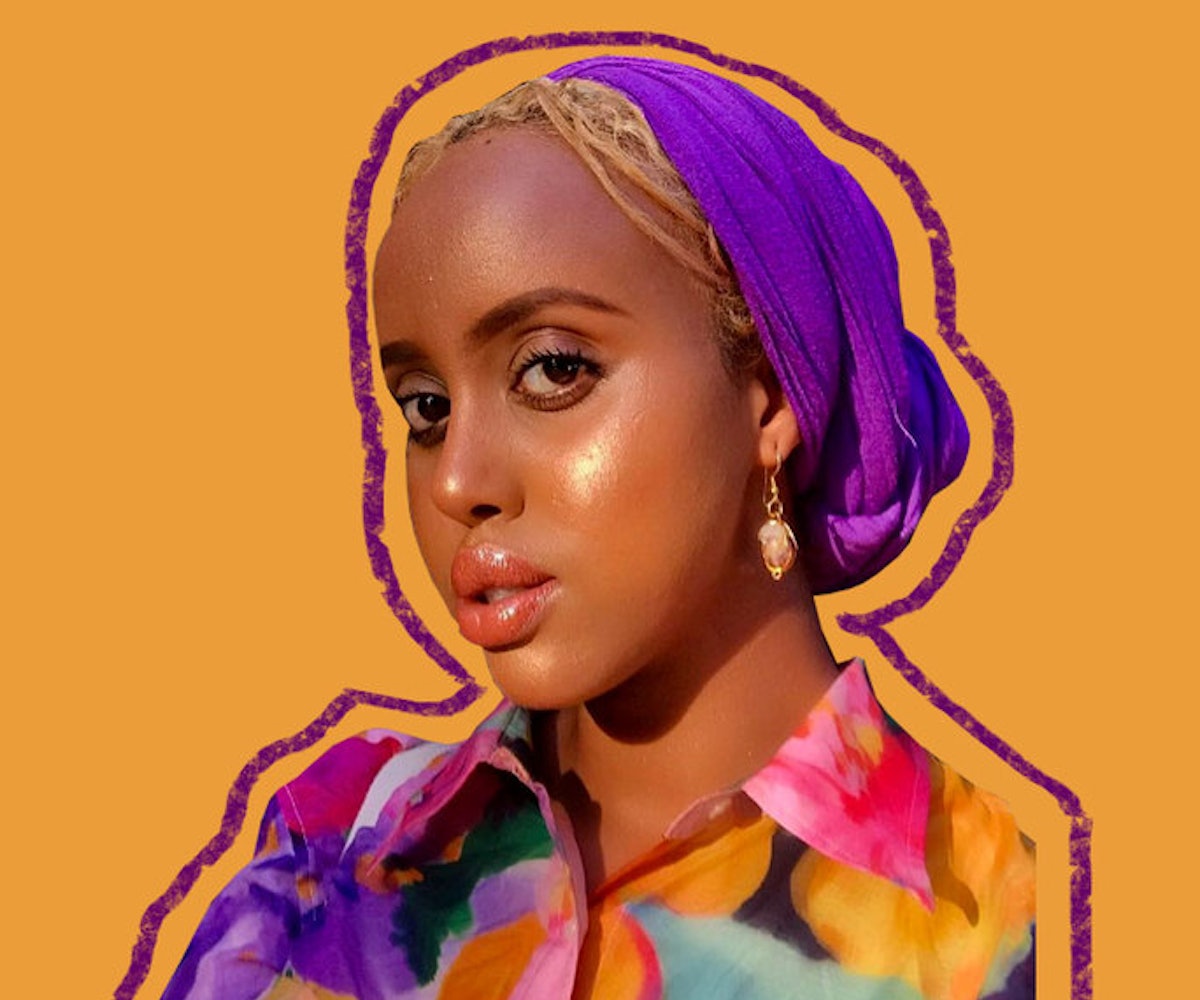 While the quickest, most personal way of finding fashion advice used to be on the blogs, there’s a whole new generation of fashion experts taking to Instagram to provide bite-sized outfit inspiration. One of those Instagrammers is Miski Muse, a model and science student from Indianapolis. On her account, @musegold, she features photos of herself, books, and moments from her daily life. Muse’s incomparable eye for pairing different pieces, accessories, and colorful hijabs together has garnered her more than 25,000 followers on the platform. While selfie culture has been written off by some as an ego-driven trend, Muse’s confident posting as a hijabi model of an average, rather than alienatingly small, size has led to daily thank-you messages from followers who feel inspired by her lovely looks.

Muse is open to speaking about the negativity she faces too–on the internet, it’s never all positive. Back in March, Muse realized that Instagram had deleted a photo of her celebrating a pair of jeans that adequately fit her hips and waist. In response, Muse reposted the photo explaining in the caption that she’s “been made aware [her] whole life that [her] body takes up too much space.” @MuseGold wasn’t created with the intention of launching a modeling career, but in the past year, Muse’s commitment has led to features on BuzzFeed, Refinery29, and Vogue.com, as well as her role as the fashion editor for 1991 zine.

Just before she hit the runways of NYFW for the first time, we caught up with Muse to talk about her experience as a model and Instagram star.

This is your first time modeling at NYFW. Who are you walking for?

I’m walking for DRØME, and it’s their first year doing [a show]. It’s this publication, and they’re having a bunch of indie designers come together for a collective show. They paired each of us with a different designer, so we get personalized outfits. The most exciting thing about it is that the designer is making me a hijab. Usually every shoot I’ve done, they’ve told me to bring my own hijab, I’m so used to that. The designer was like, "Why are you so excited about the smallest part?" I was like, "You don’t understand! I’m so glad I don’t have to pick my own!" I’m also walking for this designer called Menyelek. I think it’s his third installation at NYFW, and he’s only 20. I really like his designs, it’s an absolute honor. I’ve been following his journey for over a year now and have seen his growth. I’m extremely excited.

I’m not going to lie, I’m definitely nervous, but I feel like my whole life is just fake it till you make it, so I figure as long as I don’t look nervous, I should be okay. But I’m freaking out on the inside.

I really did. I used to have an old Instagram, but it was nothing major, just personal. I stopped using it and ended up deleting it. Last September, I started this Instagram. [I decided to be] dedicated to it, focused on it. I live in the Midwest, and nothing happens in Indiana, so I had all this free time to be creative. I feel like when you’re not in the heart of the city–even though big cities obviously have their own uses–I do think that there’s something that comes with being in a small city, or anywhere that isn’t typically associated with inspiration. But I guess there’s a different kind of inspiration that comes with it.

Yeah, but I never really thought of it as that. It was just like an extension of me. I never separated the two. Nobody thinks I’m quote, unquote extra because it’s just me. [laughs] In high school, I would wear high heels, but now you will never catch me in high heels. [And yet back then], for whatever reason, I was obsessed with high heels. I would show up with six-inch heels, and nobody would even look in my direction because it was so normal. [laughs] Everybody would say, "Could you please just start a blog?" But I was like, "No, I’m such an awkward person." When I finished high school, I was kind of bored and I started documenting my outfits, which is what my first Instagram kind of was. Last September 7, I started this Instagram, and now on September 7, I’ll walk in NYFW.

It’s so impressive that you gained such a huge audience that quick!

Yeah, I really did in a year. Granted I already had a small following, but not this big. I think anything is big, though. Like 1,000 [followers]—that’s 1,000 people, you know. Some people think you’re not big until you’re at 100k, but honestly, I’m blown away that even 5,000 people would follow me.

Since you began modeling on Instagram and have total choice over what you wear, what has your experience been modeling for clients?

I never started out with the intention of modeling, it just happened this way, I started getting opportunities. I relocated for the summer to New York and did a lot more work. Clients have been extremely understanding and accepting and allowing me to be me and be comfortable. Also, I think it has to do with the shift in fashion. Before, people would tell me I’m a pretty girl, I should model, but I just kind of thought… not everyone should model, you know? It wasn’t that I didn’t think I was good enough, it’s just that, to be honest, I didn’t see anyone that looked like me, with a hijab, in modeling, so I couldn’t fathom that.

Do you have any other particular creatives or fellow models who inspire you?

Yeah, the designer I’m walking for [Menyelek], I really, really admire him. He’s 20, and he’s done so much, even compared to people twice his age. The other day, I was watching Young Thug’s story, and he was wearing Menyelek designs. I was so wowed, it was like actualization for him. He’s very confident in his work, and sometimes [in situations like that], it’s hard to get other people on board, but seeing somebody like that co-signing was a big moment for him and a big moment for other creatives, too. I love seeing his journey, and his work ethic is insane, out of this world. Halima Aden, of course, is a huge inspiration for everybody. I love Ashley Graham and what she stands for.

You’re really open about the criticism you face on Instagram, but you’re still really outspoken and confident in your use of the app. Was there any point where you doubted using the app, or do you just reassure yourself to be the most confident version of yourself?

Yeah, people forget that whenever you’re online looking at people, you’re getting the most cut-down, best version of themselves, for the most part. I try to keep it as real as possible, but still, you’re not going to catch me on my bad day. Some people will say like, "Oh, you have a perfect life," but it’s very far from it, I just don’t need to capture that. There are very much days where I wonder what I’m even doing. I’m constantly inspired by my sister—she’s my younger sister, but she’s actually my big sister, that’s how I think about it—because she’s way more level-headed than I will be. She always says, "If it’s not you, I don’t know who it will be. I don’t know what other person is going to show their flaws and all and be their authentic self."

It also definitely feels good when I go through my messages or my emails—every single day, I get at least two emails or DMs of young women telling me that I inspire them, or that maybe they used to hide behind big clothes because they’re uncomfortable, but now they just want to be themselves. That’s when I think that this is much bigger than me. It’s hard to think that little old me is doing much of anything, making a dent in this world. There’s a lot of cool people doing good things. I guess my activism lies in being me, I’m not doing anything crazy, but I guess by being myself, it’s activism on its own.

As you prepare for 1991 zine’s launch, what are you thinking about as the fashion director?

It’s a total dream come true as someone who loves fashion. There’s a lot of cool people on board with this, so I’m really, really excited. Being able to play with what looks good on someone else—maybe not something that I wouldn’t look good in—it’s exciting to be able to style someone. Having full range to explore my fashion ability is going to be a challenge, but a challenge that I’m looking forward to.

Do you think that fashion serves as a creative outlet for you as you study public health?

Absolutely, I’m a science nerd, but fashion is where I’m able to let loose and be my very true self. I wanted to be an architect for a long time, and I kind of suppressed that because of the immigrant story of being a doctor, being a lawyer. So I had to be real—it’s something I know I’ll get a job with. I don’t regret it completely, but I wish that maybe I had followed my heart a little more. It’s okay, though—the past is the past, I definitely don’t have any regrets. Fashion is definitely a mini escape from biochemistry.

I was watching your video for Covergirl and Refinery29, and I was so impressed by your beauty routine and how particular it is. How did you figure out what works best for you?

Trial and error! Trust me, it has not always looked that blended, it has not always looked that good. You’re getting a much, much refined and better version of it. I’ve been using makeup for a long time, so I’ve played around. In middle school, I didn’t know anything about makeup, but I would just wear bright eyeshadow every day and clear gloss. Why did my friends allow me to do this? I have no idea. Then, I started to wear really heavy makeup, I wore tons of foundation and concealer. But now—I mean, with that video I was doing it for a client, so it’s not really my everyday look—I’ve gotten to a point where I don’t wear foundation unless I absolutely have to. I’ll wear a little eye concealer, do my brows, wear lip gloss, and call it a day. I’ve gone from not leaving the house unless I was caked, but now, you’re lucky if I even fill in my brows. I think it’s also growth in terms of how comfortable I am with myself now and in my skin. You could be Malala [Yousafzai], and someone’s still going to have something to say. You could be anything and everything, but somebody’s going to always have something to say. I think it’s your responsibility to block that because if you’re easily influenced by other people’s opinions of you, I know it sounds really cliche, but in the end, you’re just going to succumb to that. I don’t want to live like that, and I don’t want to give other people that control.