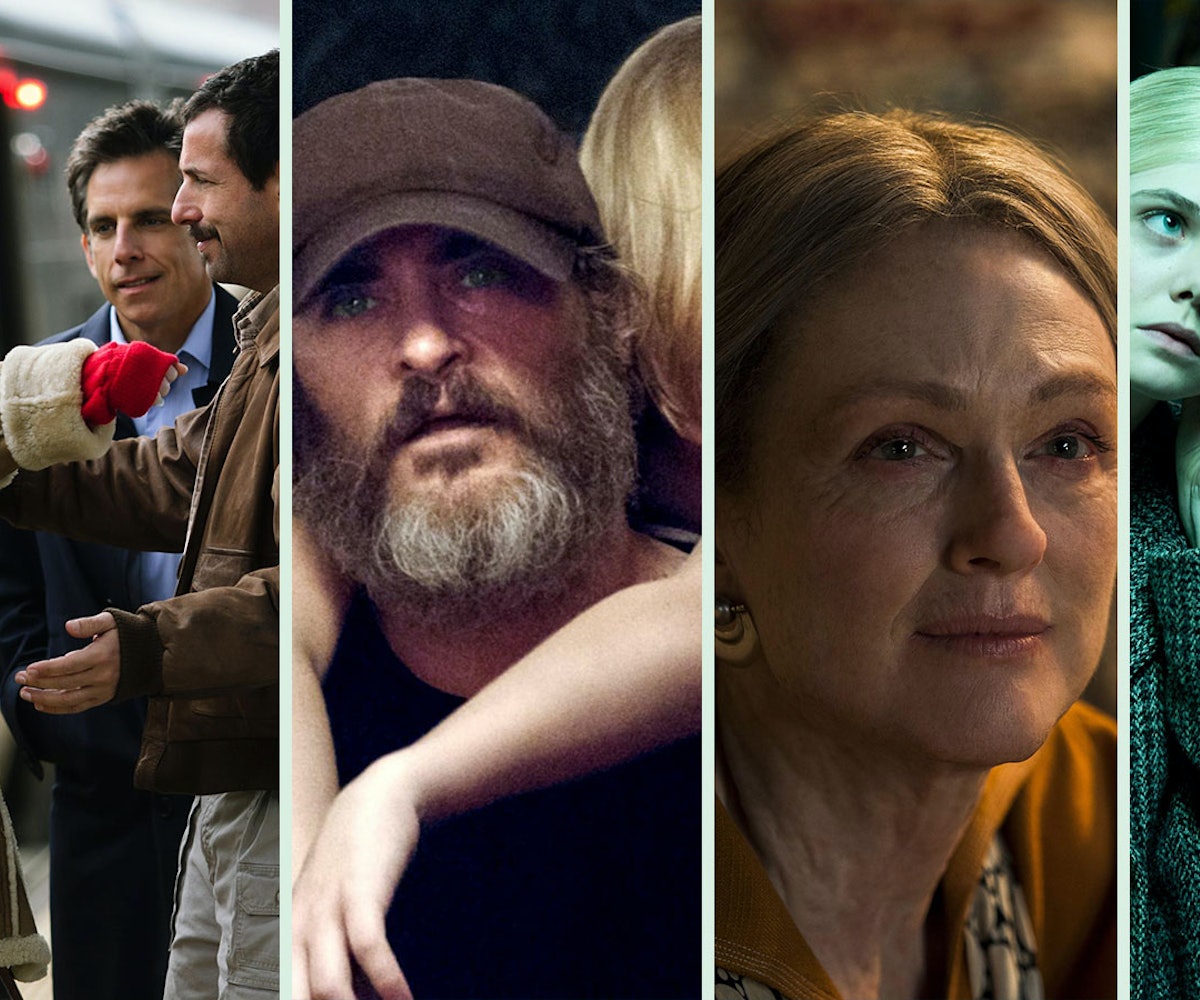 In about one week, we'll know what the world thinks of Sofia Coppola's The Beguiled, one of our most anticipated films of the year. The movie is having its premiere at this year's Cannes Film Festival, which kicks off this Thursday in the south of France. But Coppola's latest is just the tip of the iceberg. Cannes is the crown jewel of the festival circuit, which means some of the world's most acclaimed filmmakers and biggest stars will descend on the famed Palais des Festivals to show off their latest works of art. Here are 11 titles we cannot wait to see.

Good TimeThe Brooklyn, New York-based Safdie brothers—Joshua and Ben to their pals—have been on the cusp of mainstream moviemaking success for several years. Their last film, the rugged addiction drama Heaven Knows What, was a calling card that resonated loudly. Good Time should push them over the edge. The movie, set on the streets of New York, stars Robert Pattinson as a bank robber who spends the film’s running time trying (and apparently failing) to avoid a bunch of unsavory characters who are looking for him. Check out the movie’s intriguing poster, which features Pattinson sporting a pretty great haircut. The incomparable A24, which is releasing Good Time in the U.S., teased that the trailer is coming soon, so look out.

You Were Never Really HereThe last time Lynne Ramsay tried to make a movie, it ended in disaster. Ramsay, who made the disturbing and brilliant We Need to Talk About Kevin, was all set to shoot the Western Jane Got a Gun with Natalie Portman as her star. But on the first day of shooting, Ramsay simply failed to show up to set. Details around the situation have since emerged, and while a lawsuit between Ramsay and the producers was eventually settled, the acclaimed filmmaker’s reputation was damaged. So You Were Never Really Here represents a comeback of sorts, and as with any Lynne Ramsay film, expectations are high. Based on the novella by Jonathan Ames, the film stars a bearded and extra scraggly Joaquin Phoenix as an extra scraggly war vet who tries to save a young girl from a sex trafficking ring.

WonderstruckTodd Haynes is one of the most mature filmmakers working today, so the fact that he’s tackling what is ostensibly a children’s movie is a source of intrigue. Wonderstruck is based on the 2011 illustrated novel by Brian Selznick and tells parallel stories—set in 1927 and 1977—of two children who go on quests to make their lives better. One is hoping to find his father while the other is searching for her idol. As this gorgeous first clip reveals, New York City’s American Museum of Natural History figures heavily into the plot. Newcomers Oakes Fegley and Millie Simmonds are joined by Michelle Williams and Haynes regular Julianne Moore. The last time Haynes came to Cannes it was for Carol, so anticipation for Wonderstruck is huge.

How to Talk to Girls at PartiesElle Fanning and Nicole Kidman have a chance to be the princess and the queen of Cannes if this quirky indie takes off in the same way we expect The Beguiled will. They star as members of an alien race who, while on a tour of the galaxy, end up in a London suburb circa the 1970s, and, more specifically, at a party. There, a shy punk rocker, played by stage star Alex Sharp, meets and falls in love with Fanning’s character, initially not realizing that she’s literally otherworldly. The film is based on the short story by Neil Gaiman, and A24 has already picked up the rights, which bodes well for this movie’s prospects.

The Killing of a Sacred DeerThe title of this movie is about as enticing as the title for Lanthimos’ last film, The Lobster. But that ended up being one of the biggest surprises of last year, and you can expect the same here, as the Greek auteur reunites with his Lobster star, Colin Farrell, who plays a surgeon who forms a bond with a teenage boy with disastrous results. Because this is Cannes in 2017, Nicole Kidman plays his wife.

The Meyerowitz StoriesAdam Sandler was never capable of writing a movie that didn’t feel like an SNL sketch stretched out to two hours, but he has always been a wonderful avatar for the artistic preoccupations of brainier filmmakers. Over the years, auteurs like Paul Thomas Anderson and Judd Apatow have seen the empathy buried beneath the schtick. The latest director to take a chance on the Sandman is Noah Baumbach, who teams him with Ben Stiller as estranged brothers who reunite in New York to celebrate their artist father, played by Dustin Hoffman. Netflix, who ironically has enabled Sandler to churn out crappy movies on the reg, has scooped this one up.

Happy EndIf there was a king of Cannes, it would be Michael Haneke. The Austrian provocateur has won the Palme d’Or twice in three years—with 2009’s The White Ribbon and 2012’s Amour—so if you’re gambling on this year’s winner, Haneke’s latest is a pretty safe bet. (If Haneke wins his third, it will be a record.) Specifics about the film aren’t really known, except that it is set in the northern French coastal town of Calais and follows a rich family whose privileged lives contrast greatly to the refugee crisis that is unfolding around them. With the refugee crisis still a polarizing topic in Europe, expect Happy End to draw significant attention. Isabelle Huppert, coming off a banner year that included an Oscar nomination, leads the cast.

Sea SorrowThe Oscar-winning icon, Vanessa Redgrave, makes her directorial debut and focuses on the refugee crisis that has engulfed the Middle East and Western Europe. Redgrave was inspired to make the film when she saw the image of a lifeless young Syrian boy washed up on a Turkish beach, and she draws parallels between the crisis and Shakespeare’s The Tempest. Ralph Fiennes makes an appearance in the film as Prospero, who recites the line that gives the film its title.

RedoubtableIn which Jean-Luc Godard makes his triumphant return to Cannes, sort of. The legendary French director gets the biopic treatment courtesy of Michel Hazanavicius, who made a splash at the festival (and at the Oscars) with The Artist, but who faltered with his ill-received follow-up, The Search. To play the French iconoclast, Hazanavicius recruited French star Louis Garrel, a dead ringer for a young Godard. The film will focus on the romance between Godard and the actress Anne Wiazemsky, who will be played by Nymphomaniac star Stacy Martin.

OkjaIf you’re a regular reader of this site, then you know Okja is one of our most anticipated movies of the year. The just-released poster has done nothing to change that sentiment.

Ismael’s GhostsCannes is, among many things, a celebration of French cinema. It’s fitting then that this movie from highly respected French director, Arnaud Desplechin, is opening the fest. It’s even more fitting that his movie stars French screen icons Marion Cotillard and Charlotte Gainsbourg, as well as Mathieu Almaric and Louis Garrel. And it’s the most fitting that Ismael’s Ghosts is about filmmaking itself, with Almaric playing a director whose world is turned upside down when he’s visited by a former lover (Cotillard), just as he’s about to begin shooting a new movie.