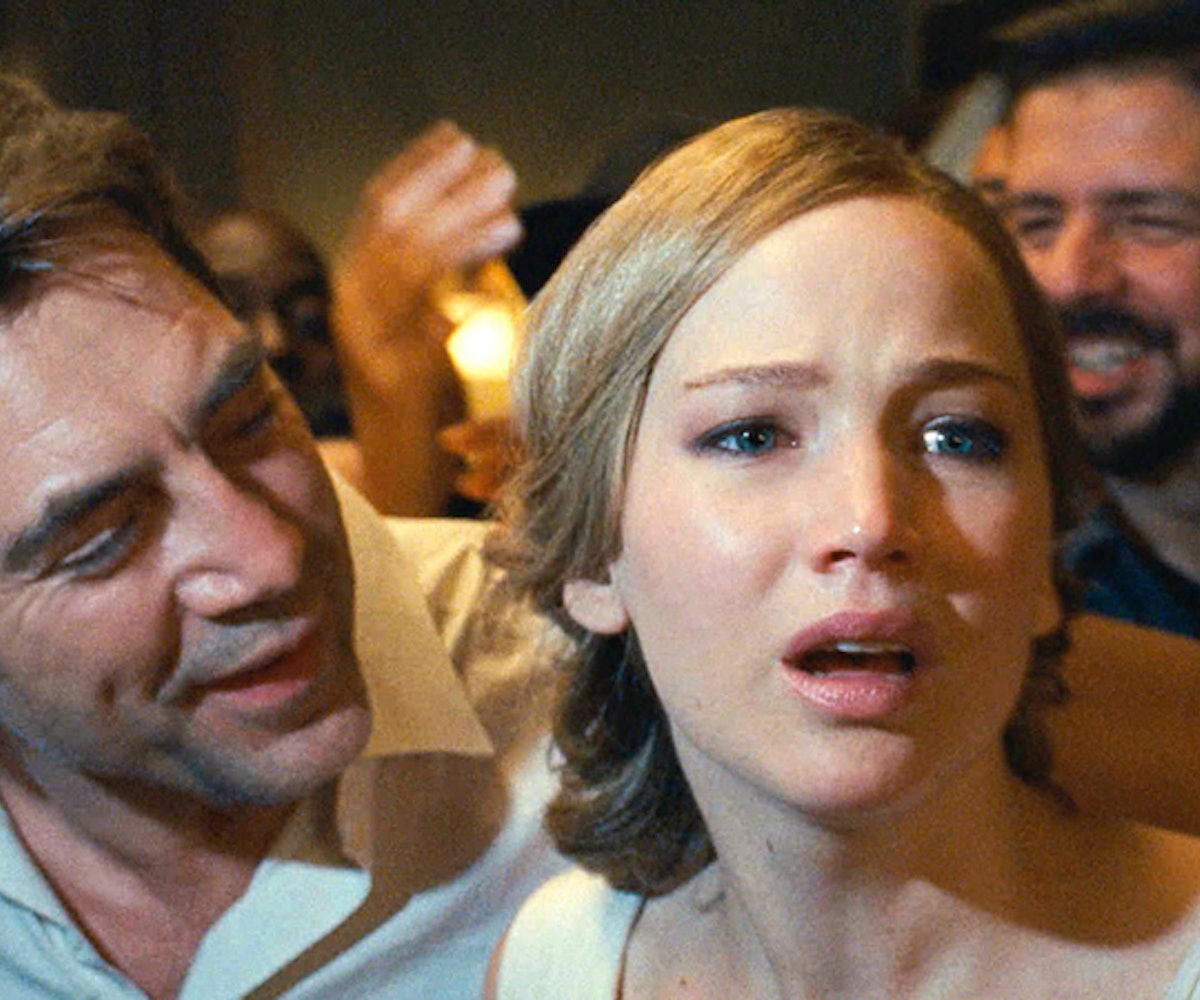 There's a theory that if everything in life were perfect, we wouldn't need art. We create because the world is imperfect, or, depending on what you believe, because we have made it so. Art exists because it's our way of answering big questions and inspiring even more. Movies, in particular, function as societal mirrors; we project ourselves onto the characters playing out on screen, comparing their actions to our own: Are they acting immorally? Why did they make that decision when there were so many other, better ones? What would I do in their situation?

What, then, are we to make of a movie like Darren Aronofsky's mother!? Its spectacularly mysterious and coy marketing campaign did exactly what it was supposed to do: drum up excitement and a bit of fear. "You will never forget where you were the first time you saw... mother!" and "Seeing is believing" were blasted across the film's two trailers, bookending guttural screams and images of a panicked Jennifer Lawrence. Aside from its ominous sentence summary about a couple's tranquil existence being interrupted by unannounced strangers, nothing about mother! was known until it hit the festival circuit to equal amounts of boos and cheers. Aronofsky, as the critics teased, went places with this movie no one ever expected from a big director working with a major distributor. (These critics seem to forget Aronofsky is the brain behind Requiem for a Dream's infamous sex party scene.)

Full disclosure: I've been obsessed with mother! since first seeing Lawrence's painted dazed eyes looking out into the sky as she handed over her heart from a gaping hole in her chest to someone/thing out of the poster's frame. Aronofsky is a bit of a hero of mine, having opened my eyes to the real cathartic possibility of cinema when I first screened Requiem. (I now watch that movie a couple times a year. Does that make me a little masochistic? Maybe.) Trying to figure out what the actual fuck this movie was about led me through the darkest corners of Reddit, consuming every theory I could find; I even spent an inordinate amount of time studying both Lawrence and her co-star Javier Bardem's painted character posters, layering them on top of one another for clues. (There are many.) The more each festival review called out mother!'s insanity, the more eager I became.

To call it shocking would be a grave understatement. Aronofsky doesn't hide the film's allegorical nature. It's all laid out in the octagonal mansion Lawrence's and Bardem's unnamed characters live inside. She is mother, and he is Him (yes, with a capital H). From the Biblical symbols Ed Harris and an outstanding Michelle Pfeiffer represent, along with their Cain and Abel-like sons, to the nihilistic outlook on celebrity and its effect on creativity, mother! succeeds in getting its myriad of points across. The violence Lawrence endures is unsettling, yes, not least because Aronofsky has chosen to show it being inflicted on another human—a mother, the bearer and giver of life no less—the one trope we, as an audience, are supposed to empathize with the most.

Yet, once these strangers arrive and don't stop coming, the real trouble becomes the portrait of humanity Aronofsky paints through these hundreds of unnamed extras. We're shocked by their treatment of mother but I challenge each and every audience member to not find a stranger's actions with which they can't identify. What an ugly feeling that invites. Add on the dizzying handheld camera work, claustrophobic framing, and layer upon layer of debauchery and defilement, and you've got yourself a polarizing masterpiece.

Mother! is, at the end of it all, a cautionary tale of birth, death, and the life cycle; the birth and death of an idea; the birth and death of the earth; the birth and death of compassion, where love doesn't solve everything, try as some people might. As Pfeiffer's character, Woman, says, even after all the things a mother figure gives, it's never going be enough. As long as there are creators producing work that asks self-serving questions, brushing off the larger universal ones Lawrence's mother seeks, the search for perfection is done in vain.

Mother! is so much more than a psychological horror film, it's a wake-up call. Mother! is exactly why we cannot have nice things.