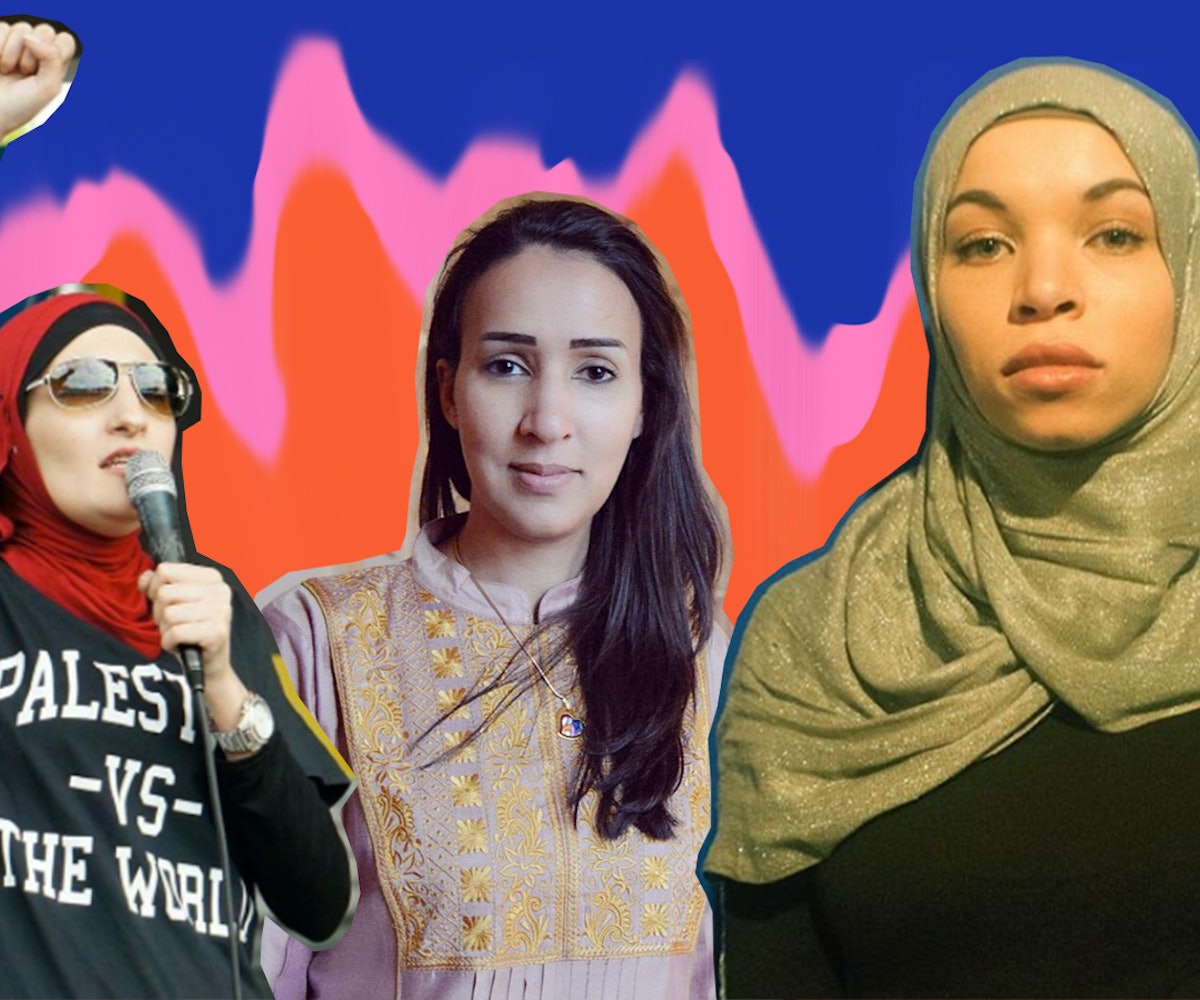 Today is Muslim Women’s Day, a day of celebration and solidarity that highlights the strength and achievements of millions of women around the world. Among the many Muslim women doing incredible things, in fields ranging from science and literature to fashion and music, are those who work as activists, fighting for the rights of all people, fighting for equality and a chance for everyone to be treated with fairness and respect, fighting for Muslims to be treated and portrayed with the same dignity that so many other people get automatically.

And even though it’s commonly said that it should never be the job of the oppressed to educate the oppressor, these activists are working overtime to do just that while also raising up their communities, making it time for us to bring attention to the important work they're doing. Read up on what these powerful women are all about, ahead.

Amani is the founder of MuslimGirl, an online publication that puts Muslim women at the forefront. She’s only 24, but she’s already accomplished the work of someone well beyond her years, including, but not limited to, leading the initiative to make today Muslim Women's Day. On top of that, she’s an accomplished author, regular public speaker, and overall badass. You can read more about her book and experience growing up Muslim in a post-9/11 world, here.

When Australian senator Jacqui Lambi tried to make the misguided argument that Muslims who support Sharia law should be deported (without actually knowing what Sharia law entailed), social advocate and founder of Youth Without Borders, Yassmin Abdel-Magied, responded with pointed grace and confidence. "Islam to me is the most feminist religion, right,” she says. “We got equal rights well before the Europeans. We don't take our husband's last names because we ain't their property. We were given the right to own land. What is culture is separate from what is faith.” After which, she got the backing of Solange.

This is just one instance of Abdel-Magied’s brilliance. Her TED Talk “What Does My Headscarf Mean To You?” has more than 1.5 million views and she is largely active in promoting diversity in western nations. She wears a lot of valuable hats.

There were but a handful of young women at the helm of organizing the monumental Women’s March on Washington, and Linda Sarsour was one of them. And she’s been a huge voice, specifically for Muslim Americans in New York City well before that historic event. During her role as executive director of the Arab Association of New York, she helped to partly dismantle the NYPD’s program which spied on the city’s Muslims and has helped to close public schools for the observance of Eid al-Fitr and Did al-Adha, two of the most important Islam holy days. Sarsour, along with other Muslim activists, also helped launch a crowdfunding campaign in response to the St. Louis Jewish cemetery that was vandalized in February.

There’s a chilling image of Blair Imani that she uses as her header on Twitter. It shows her screaming in rage/fear/distress, as she's being arrested during a protest in Baton Rouge, Louisiana. As you can see in the picture, Imani is small in size but mighty in the work she does. The 23-year-old works full-time for Planned Parenthood while also heading Equality For Her, which she founded in 2014. In both roles, she aims to uplift those on the femme spectrum in marginalized groups while bringing attention to global issues affecting the Muslim, black, LGBTQ+, and femme communities.

When the tragic attack occurred in London last week, Akeela Ahmed and other Muslim activists sprang into action by creating a crowdfunding campaign to help raise money to support the victims and their families. They raised more than 17,000 British pounds ( approximately $21,400) in 24 hours. Her resume also includes working with companies like the Muslim Youth Helpline, the National Society for the Prevention of Cruelty to Children, the Christian Muslim Forum, and Mosaic’s Ex-Offender Programme. Currently, she works on a government level addressing anti-Muslim hatred. In 2014, she founded She Speaks We Hear, which gives women’s unfiltered voices a platform. In January, she stepped onto a platform of her own while giving a speech at the Women’s March in London.

When Saudi activist Manal Al-Sharif dared to get behind the wheel of a car in her home country (while filming the event), she made headlines. Eventually, she was thrown in jail for the act. She’s been recognized by Time magazine as being one of the 100 Most Influential People in the World and, since her time on the road, has launched the Women2Drive movement.

“For us, driving is not what we are looking for, but being in the driver’s seat of our only destiny,” she told The Huffington Post in an interview. “That means ending guardianship in Saudi Arabia, which means recognizing women as full citizens. I always say that countries that keep women in the backseat will always end up on the wrong side of history.”

Look out for her book Daring to Drive: A Saudi Woman’s Awakening out this summer.

Egyptian rapper Myam Mahmoud uses her music as a form of activism. She appeared on the reality show Arabs Got Talent—as did her lyrics about girls’ rights. On why she got into rapping, she told The Sydney Morning Herald: ‘‘What got me started, what really angered me, was Arab rap songs that constantly criticized the way women dress... A friend and I thought, ‘They aren’t the only ones who are allowed to criticize.’’’