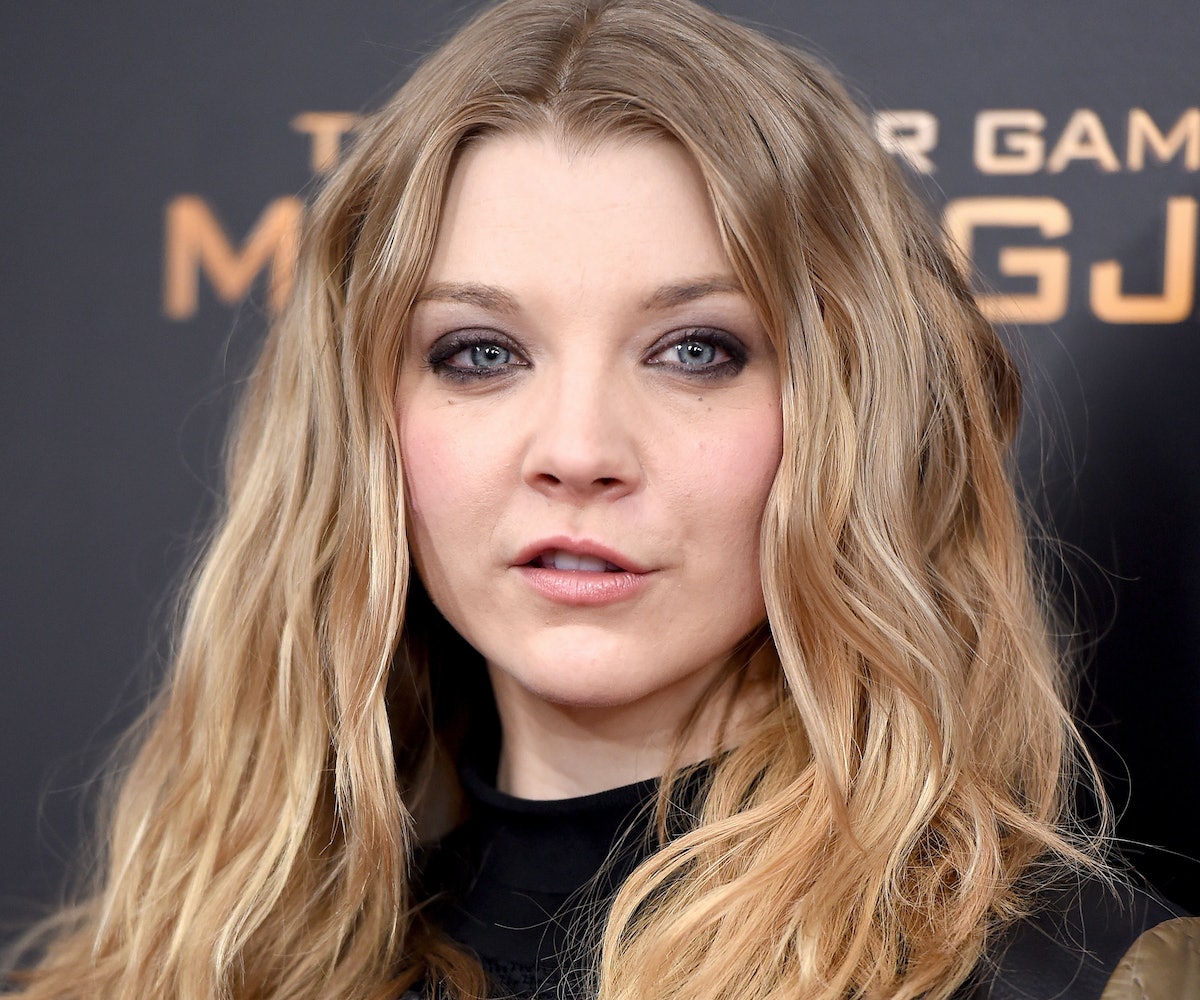 As a crucial component of the Game of Thrones and Hunger Games juggernauts, Natalie Dormer has been one of the most visible actresses of the last few years. But the psychological horror movie The Forest marks the first time the British actress is above the marquee as the star of her own film. In it, Dormer plays Sara, a young woman who goes looking for her twin sister Jess (also played by Dormer) after she goes missing in Japan's so-called Suicide Forest. Based on the real-life Aokigahara forest, it's a place where lost souls go to end their own lives, which means Dormer—along with her co-star Taylor Kinney—encounter a lot more than some flora and fauna. We sat down with Dormer to talk about why The Forest is a horror movie for women, writing her own movie, and being first on the call sheet.

One thing that’s so great about Sara—one of your characters—is that she’s never a damsel in distress, which we tend to see a lot in horror films.

That’s a good point! I never thought about that.

What was it about her that really drew you?

I was really intrigued by the idea that this woman is carrying a profound guilt that she’s unaware of. I found the script really psychologically intelligent and it just happened to be a horror movie. To me, the characterization and themes that it dealt with are what drew me to the script. She’s carrying this profound sense of guilt and this profound sense of owing someone that she loves more than anyone else in the world. To have a movie where the central relationship is one between sisters and siblings is such a refreshing thing, especially in this genre. I found some of the choices that had been made in the script very intelligent, so I was interested in exploring it and heightening it, like taking a horror movie and making it one of those heightened horror movies that is really an interesting exploration of the human condition.

As a viewer you also feel so emotionally attached to Sara and Jess and everything they’ve gone through their whole lives.

Were you aware of the forest in real life before this film?

And you visited it too, right?

I did. We took a day trip up the week we shot in Tokyo. I felt a little pilgrimage was necessary, and I visited one of the ice caves that’s actually there. It has this air system where it is freezing cold and there’s these shots of zephyrs that are piercing through the forest. It’s this completely natural phenomenon, but it’s interesting that as human beings we put all these layers on it. The Japanese are so respectful of the place. It’s very sacrosanct to them, and it’s steeped in heritage or superstition, to the extent that my driver wouldn’t even step off the path to take a selfie with me like five feet off the path. I just found it really, really fascinating.

Are you a superstitious person at all?

[Laughs] Hmm...no? Yes? In a very casual way as most of us are. I don’t walk under ladders. That’s more a kind of intelligence thing. I’m a stage actress—that’s what I trained as—so I have a few actor superstitions, like you should never whistle in a theater, and you don’t say the name of the Scottish play when you’re in a theater. I kind of adhere to those out of respect to tradition more than anything else.

It’s interesting you say that, especially since Aokigahara itself is also so steeped in folklore and tradition. Were there any scary stories that stuck with you as a kid?

As a child, I didn’t like being scared, to be personally honest. I didn’t like that thrill. Same with roller coasters, as well. I like to physically challenge myself, but as a kid I didn’t terrify myself, whereas my sister liked to be scared. That would be a difference in our personalities. I remember reading Jane Eyre when I was 13 or so and being terrified by the idea of the madwoman in the attic who’s going to like, set your bed on fire. I remember that element of Jane Eyre freaking me out—Mrs. Rochester.

A lot of your recent projects—Hunger Games, Game of Thrones, and now The Forest—are quite dark. Is that something you find yourself drawn to?

I like brave writing. I like bold writing that really wants to contemplate the human condition, so I suppose intuitively a lot of those projects do touch on dark stuff. But there’s brave writing in comedy, as well! I’ve never done a comedy but I’d love to. For me, it’s about bold, brave writing.

Speaking of brave writing, you have co-written Darkness, which you will be starring in. What was that like?

The writing experience was very lengthy. We’re talking years and years and years, with lots of notes and redrafts. As we’re edging to principal photography and pre-production, I know there will be changes because actors are becoming attached and as I know, you come in and you have an opinion about the script and you want to change stuff, so it’s given me a thicker skin. It’s given me a whole new level of respect for writers that I work with just as an actor, because to get something made and good on the page is difficult. If it was easy, everyone would be doing it. I’m not saying I’m a writer, but I’m just saying I really enjoyed this writing experience. Ask me the question in a year’s time when we’ve filmed it, and there’s been reaction to it, and then I’ll tell you whether I’ll be doing it again.

In Game of Thrones you work with an incredible ensemble cast. What was it like doing a film where you have a lot of scenes by yourself?

I loved the bonding time that I got with the crew. That’s one thing you miss in an ensemble—you don’t really get to know your crew from the inside-out, especially our director of photography or cinematographer and the great camera crew. You’re there every single second for every single frame. It means that you become a really tight-knit member of that team, and that’s the joy of being number one—and number two—on the call sheet.