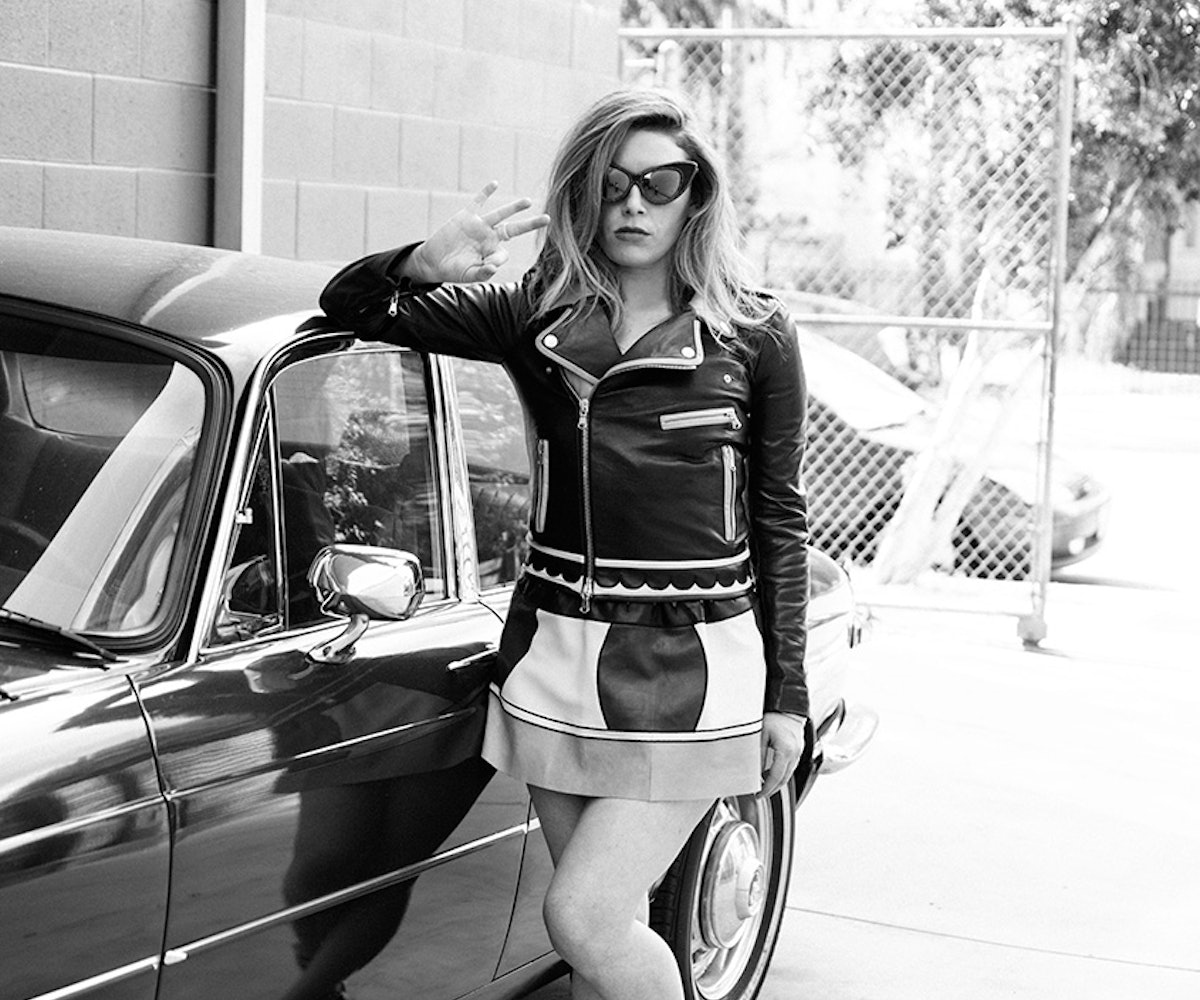 Natasha Lyonne is teaching me proper texting etiquette. We’re nestled in a back booth at a diner in Los Angeles’ Silver Lake neighborhood, about to eat scrambled eggs and turkey sausage. She rests her head against the wall as she pulls up a GIF saved on her phone of a woman punching a human-sized penis. “A GIF always comes in handy,” she explains. “It doesn’t have to be something racy—it could be a gerbil eating a snack or whatever.”

The 36-year-old Orange Is the New Black actress, a born-and-bred New Yorker, is only visiting L.A. Although she’s often here for work, it’s clear the woman hails from the city that never sleeps: She possesses a charming New York accent, an intrepid attitude, and admits to shoulder-checking slow-moving pedestrians, but insists it’s a polite gesture. “I feel very territorial, like I’ve already pissed all over this town and I’m allowed to do what I want and where I want to do it,” she adds. Teetering on the edge of sarcasm and sincerity, Lyonne admits to having some similarities with her Orange character, Nicky Nichols, a tenacious convict and former drug addict with an Upper East Side education. “Other than the fact that I was a scholarship kid, it wasn’t too radically different from my own story,” she muses. She delves into what it was like growing up in a major metropolis, and those two years her family spent in Israel for tax evasion purposes. It was a childhood full of pet rottweilers, BMX biking against traffic, Israeli acrobat training, and adventures with her father, who every Sunday would take her for a drive to steal all the newspapers in their neighborhood. “It was this hilarious thing we would do,” she reminisces. “Looking back, not a great influence.”

These hijinks were mixed with constant go-sees. She appeared in commercials for Hershey’s, Robotech, Pine-Sol, Minute Maid. And then her first big gig came at age six on Pee-Wee’s Playhouse. “Having your child become a child actor is absurd in the first place,” she says. “But if you’re going to do it, at least put them on Pee-Wee’s, because then it’s, like, imagination land.” Eventually, her role as a cute hippie kid on the show evolved into leading roles in cult classics like Slums of Beverly Hills and But I’m a Cheerleader, to name a couple.

“Now that I’m past the nightmare of it all—all my shenanigans and drugs—and have come out the other side, it is kind of funny to be 36 with 30 years of experience of doing my job,” she says.

Lyonne, open in discussing her past drug addiction, likens the experience to being a kid who enjoys a guiltless slice of Carvel ice cream cake shaped like a whale at a birthday party before spiraling out of control and eating the entire cake alone in her room. In Lyonne’s case, the cake was heroin. “It’s hard to get a job after your reputation is destroyed like that,” she admits. “There was a time when it felt like, ‘I’m never going to do that again; that time is over.’ And then you’re right back in it.”

It was while on the set of Weeds—where she played a role in the show’s finale—that she first read the script for Orange Is the New Black. “As I was reading it, I was emailing it—which is, you know, illegal—to all my actress friends being like, ‘We all need to get on this show and live happily ever after in prison.’”

Turns out, Lyonne ended up working with a group she’d never met before. “[Casting director] Jen Euston found an incredible cast—there’s so many unknowns. Not any more, obviously, but there’s Samira [Wiley] and Danielle [Brooks] who were literally fresh out of Juilliard. They’re wildly gifted and not at all like their characters.”

To Lyonne, the one quality that makes the show engaging to co-stars, convicts, and Netflix audiences alike is its relatability. “I think this show is just a heightened set of circumstances,” she says. “Like everybody is always just one mistake off of being in jail. Everybody wants to rob a bank, but people rarely do it. We don’t do it for a million moral reasons, but more than just that, we don’t do it because the consequence of not pulling it off would be going to jail. The first thought is incredibly universal,” she says and pauses. “It’s just a matter of, like, ‘Do I act on it or not?’”