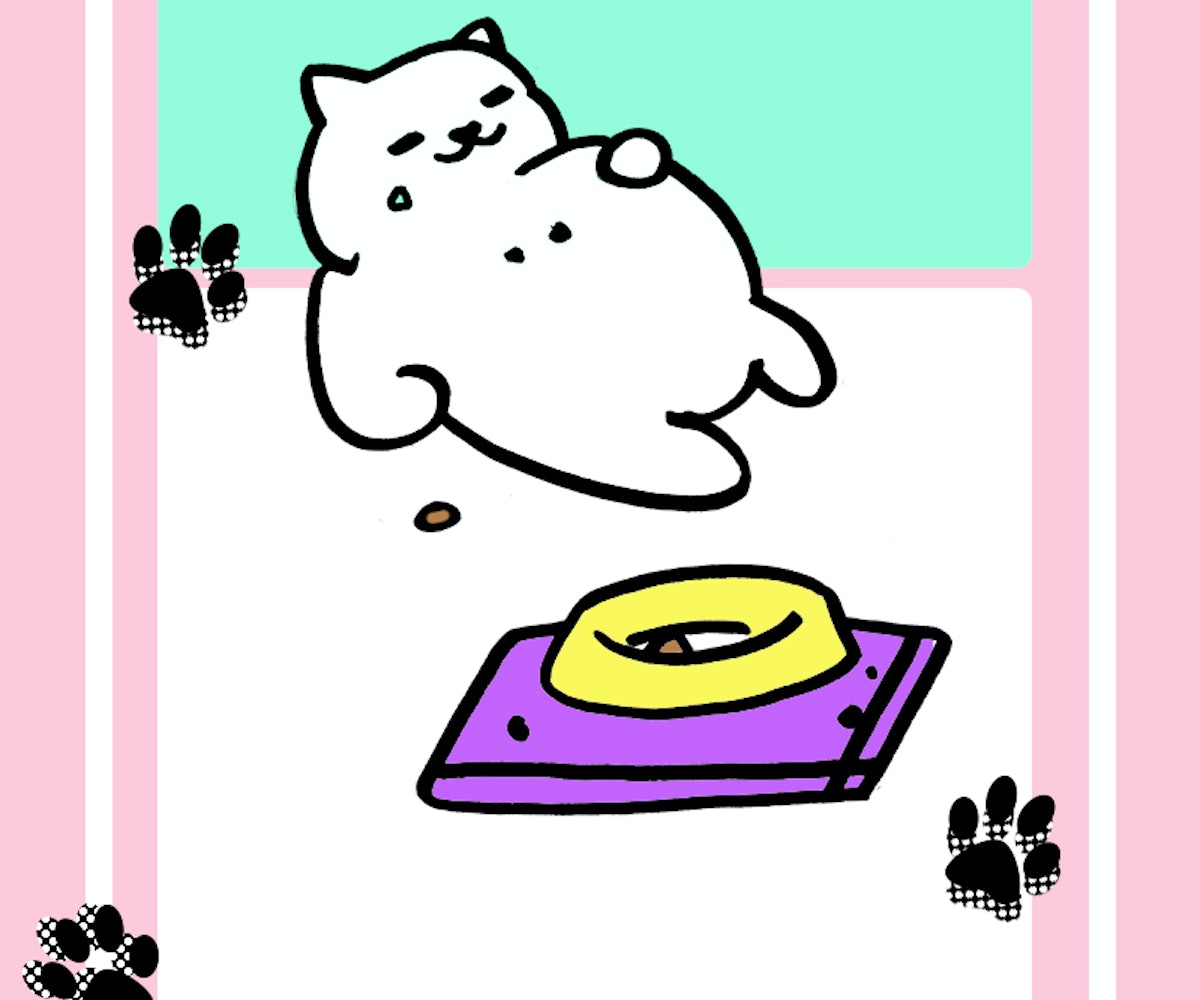 There’s just something about Neko Atsume. To the untrained eye, it’s an app game for cat lovers: there’s a cartoon yard, some cartoon cats, and cartoon presents to buy for them with highly coveted cartoon fish. But to Neko Atsume evangelicals, things get deep.

The cats, some common and some rare, are completely fickle about when and where they show up. There are no rounds to win to get more fish. You just have to wait, nurture your yard, and relax.

If that’s not enough wisdom for a lifetime, behold Neko Atsume tarot. Honestly, there’s no other crew we’d want help from more to improve our spiritual lives, and each little cat fits way too perfectly into the Major Arcana.

If you need a brush-up on divination, check out our 101 here. If not, grab some frisky bits and read on...

The Fool card represents, well, foolishness, but it can also symbolize new beginnings, spontaneity, and a free spirit. Between Billy’s big grin and his tendency to sit in a hat while wearing one, you know he’s delightfully foolish. He brings tales from the West and unlimited potential for your journey. This card's darker themes, however, are immaturity, recklessness, and blind risk-taking—so take Billy with a grain of salt.

The Magician card tends to show up when our creative powers of manifestation are at their strongest. Señor Don Gato interprets that energy through artful jousting, channeling pure power, skill, focus, and above all, action. On the other hand, The Magician can also represent a misuse of power to manipulate others and poor planning skills. Should've known from the mustache.

Serenity, knowledge, and understanding are a few of The High Priestess card’s themes, but she also represents deep feminine intuition. This card naturally takes its form in the yard as Sassy Fran, boss of the Cardboard Cafe where no one seems to actually eat. Instead, she's just there to listen and give some good advice to her fellow cats. Beware, though, sometimes she will present herself when hidden agendas are lurking or when we are ignoring our intuition.

The Empress card symbolizes our connection to the Divine Feminine, creative power, mothering, and fertility, and often pops up around actual pregnancies as well as metaphoric ones. Alternatively, when your most expensive seats are around. In keeping with Lady Meow Meow's taste for the finer things, she symbolizes abundance and beauty, but can also carry messages of unhealthy codependence and creative blocks.

Upright and rigid, The Emperor—Xerxes, of course—symbolizes authority with a masculine-leaning energy, like a father figure. He represents solid foundations and structure, but can also mean excessive control, domination, and inflexibility. Still, if you've ever been blessed by his distinguished self, you know how calming his presence can be.

Sometimes called the High Priest card, the Hierophant represents sticking to the conventional, conforming to tradition, and identifying with a particular group, belief system, or organized religion. Bob The Cat is a simple cat with simple dreams, so this fits him perfectly. We also can't help but think of a cult leader when we see him. This card’s flip-side symbolizes unnecessary restrictions that his norms come with.

The Lovers Sapphire and Jeeves quite obviously represents romantic and sexual love, but this card also symbolizes harmony, perfection, and deeply held common values beyond physical lust. Just look at their fancy union. But sometimes, this card can indicate imbalances in relationships and an incompatibility in ethics and values... so all is not what it seems under the fairy-tale parasol.

The hard-working Conductor Whiskers represents overcoming obstacles through the sheer force of self-confidence and control. Let's be real, Conductor Whiskers isn't in it for the fish. He's there to do his job. This is a very assertive card, but its more negative side illustrates excessive aggression and a lack of direction. Ironic, Conductor, very ironic.

Joe DiMeowgio is the portrait of inner strength, determination, and the will of the self. The Strength card also represents courage, patience, and gentle control, while its darker aspects carry messages of self-doubt, weakness, and lack of self-discipline. Is that why he never seems to reach his beloved ball?

The Hermit’s most literal reading involves spending quality alone time to recharge and explore your introspective side, but this card also represents honoring your inner guidance day-to-day. On the flip side, The Hermit’s negative qualities are loneliness, isolation, and unhealthy withdrawal. With all of Kathmandu's wisdom, he's absolutely a loner.

Guy Furry makes the most ordinary object a delicious treat. Drawing on the cyclical nature of life, the Wheel of Fortune card represents bad times turning good. This chef's a little wacky, though, so he can also represent things spinning out of control, negative external forces, and a streak of bad luck.

No one but the conservative Chairman Meow can be Justice. This card straightforwardly represents fairness and the balance between cause and effect, as well as truth and the just rule of law. Justice’s darker aspects run the gamut from unfairness and a lack of accountability to dishonesty and harsh judgements. Typical Meow.

The shy Pepper's a mystery to us, as is The Hanged Man. She's nuanced in that this card can represent suspension of action, restriction, and indecision as much as it can represent healthy detachment and noble sacrifice. It typically represents delay, but also nods to martyrdom or playing the victim. In times of confusion, Pepper's eyes might hold the key.

Possibly the most misunderstood card of the Major Arcana, the Death card represents metamorphosis, change, life transitions, beginnings, and endings. Frosty was born ready for the changing of seasons but makes an amicable appearance more often than any other rare cat. She's not all that cold after all, but Frosty's darker aspects point to an inability to move on and staunch resistance to change.

Mr. Meowgi brings lessons on balance, patience, moderation, and a sense of purpose. He also brings the highest power level we've ever seen, but his negative qualities are symbolized by a lack of a long-term vision, slipping into imbalance, and overdoing it while living excessively.

Tubbs is the most misunderstood cat in Neko Atsume. There, we said it. The Devil represents situations or forces that trick you into believing you are not in control of yourself. Think: your fears, addictions, toxic impulses, and HUNGER. Its flip side, however, is actually quite positive, symbolizing breaking free and reclamation of personal power. Tubbs just wants a snack, let him live (and bring you TONS of fish).

How could The Tower not be the Cat Tree? Traditionally, The Tower card is all about shake-ups of the most dramatic kind, times when sudden upheaval and painful revelations force you to question huge parts of your life. Embracing change and actively rebuilding despite insecurity are the positive messages here while fear of the unknown and avoiding change are its negative sides.

Renewed hope and faith are the major themes surrounding The Star’s spiritual nature, as well as serenity and inspiration. Peaches, the rarest of the common cats, appears during times of despair, discouragement, and faithlessness. Somehow she makes all the waiting worth it.

Another oddly misrepresented tarot card, The Moon symbolizes the “shadow” self. The ethereal Saint Purrtrick leads us to confront our subconscious fears, repressed weaknesses, insecurities, and anxieties. Magic has a flip side, though, represented by confusion, releasing fear, and unhappiness.

This desert royal appears times of abundance, happiness, and success. Ramses' energy is fun and warm and is filled with positivity and vibrancy. This card's negative side indicates a temporary lack of success or a brief period of depression, like when Ramses departs without leaving a single golden fish.

Ms. Fortune—Judgement—tends to appear during times of self-evaluation and reflection. This card represents “awakening” from past mistakes and seeking absolution, like a rebirth. Her negative side nods to a refusal to examine one’s actions and self-doubt.

The Neko Atsume universe comes together as the last card in our Major Arcana deck. The World symbolizes completion, fulfillment, big achievements, and sometimes, this card can represent travel, too. One day we'll get to travel to our yard, fingers crossed.

NEXT UP
Entertainment
Seventeen On Face The Sun & The Start Of A New Era
Entertainment
The Best Movies About Marilyn Monroe
Entertainment
Emmy Rossum On Angelyne's Impact On Modern Day Influencers
Entertainment
Exclusive Clip: Cardi B Tries Football With Megan Thee Stallion