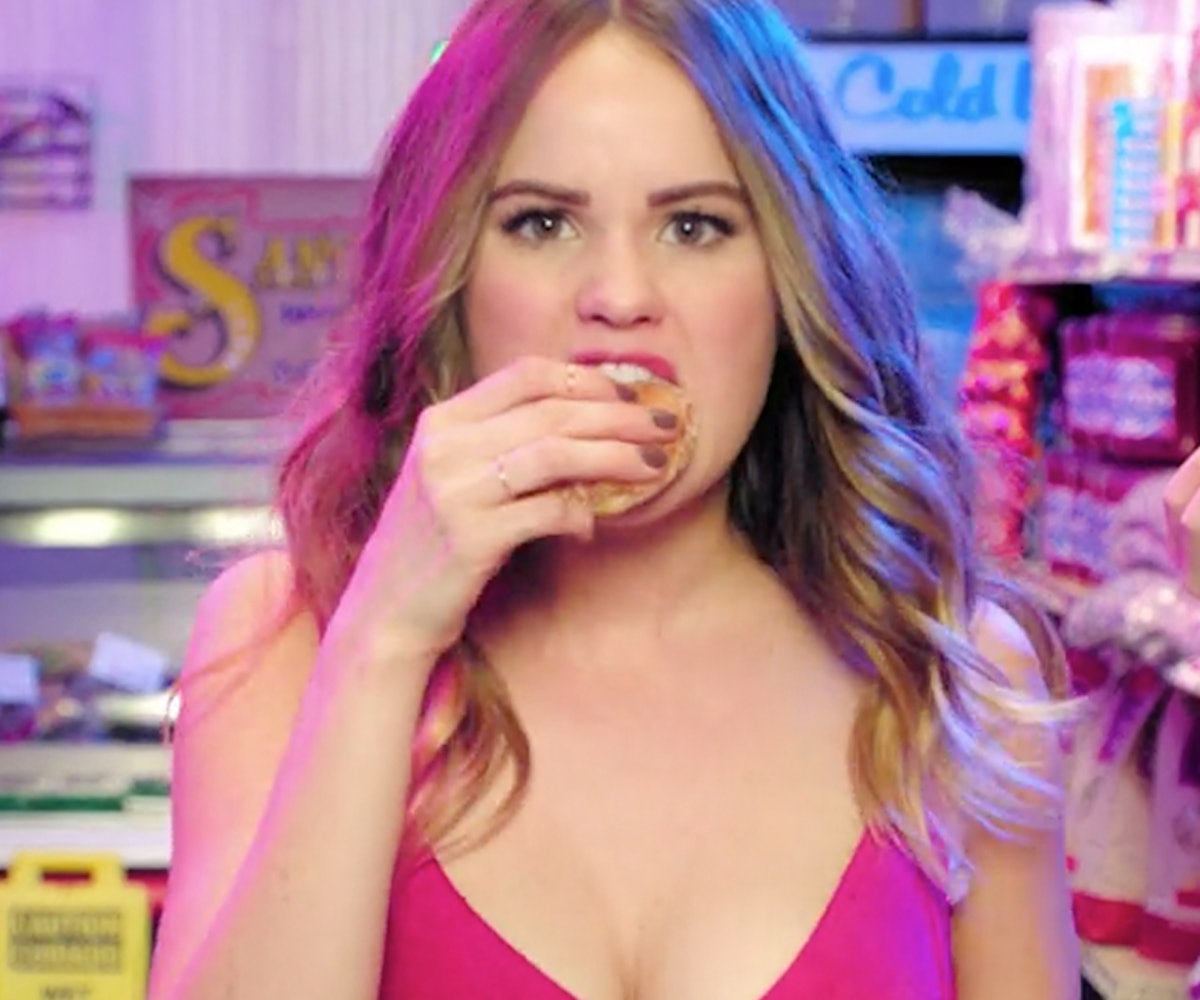 Ever since the trailer dropped for the new Netflix series Insatiable, there has been a ton of concern that the show would be filled with fat-shaming. Now that the show is able to be streamed in full, we can say that we wish that the fat-shaming weaved throughout Insatiable was the worst of the show's transgressions—but it's really only the beginning.

As anticipated by its trailer, the series is indeed fatphobic. Wherever the writers’ intentions may lie, the show's foundational premise—in which Patty (Debby Ryan), an overweight high schooler who loses 70 pounds in a few months, after having her jaw wired shut—comes across as a tone-deaf and promoting an ultra-thin ideal. And from there, it only gets worse. So bad, that, midway through the season, you forget that the fat-shaming ever occurred, so overwhelmed are you by the myriad of irrelevant, underdeveloped plot lines that have been introduced.

Among the many offensive stereotypes, caricatures, and cliched narrative threads you need to wade through, one is launched in the first episode, when a mother falsely accuses pageant trainer Bob Armstrong (Dallas Roberts) of sexually assaulting her daughter. This feels particularly egregious in the era of the #MeToo movement, but it's only the beginning. The show goes on to include slut-shaming, statutory rape, and much more. Jokes are made about every topic under the sun from molestation to, yes, eating disorders. There are trips to rehab and an exorcism, and nothing serious is ever treated seriously.

There's a defense for this: Insatiable, as per its creators, is satire. But in order to be satirical, a story must have an intelligent foundation, a clear directive and message. The writing must be smart and witty in order to get that message across. And in order to work properly, a satire must maintain the clarity of that message. Insatiable doesn't do that. Instead, it muddles together several messages, without ever being particularly clear as to what it wants to say or what it believes.

Take its original story line: Patty and her weight loss. After being tormented her entire life for being obese, “Fatty Patty” is vanquished, and she can finally start living the “amazing life” that she's sure all skinny people have. Of course, being skinny doesn't magically solve anyone's problems. But that isn't even the lesson Patty learns. Yes, she realizes that it’s not enough to be skinny. But it isn't because she doesn't love being skinny. In fact, she seems to fully believe the "skinny is magic" line that she's fed throughout the series. Instead, her continued angst comes from her quest to get revenge on everyone who ever wronged her and to fill the void in her life that food once held with that vengeance. This vengeance comes in the form of beauty pageants. With an assist from falsely accused and now-ostracized Bob, Patty works toward a future in which she will be crowned a winner and all her former tormenters can, at last, be seen as losers.

But it's impossible to root for Patty because of how filled with hate she is. This—even more than all the show's irrelevant, poorly conceived characters—is where the show's true issue lies. Insatiable wants us to believe that the years of emotional and mental abuse Patty endured are what led her to be so hateful even after shedding the pounds. The show’s creators claim that the plot is a message about the devastation that bullying can have on a teen. But it's hard to believe that the bullying made Patty into a selfish, self-absorbed murderer, or that bullying is an excuse for that. It is a far too similar narrative to the one that claims that school shooters were just treated unfairly, that their horrendous acts are actually the fault of other people. Insatiable's narrative flaws are reminiscent of those in Thirteen Reasons Why, in which teen suicide was treated flippantly, and bullying was also discussed superficially. These portrayals do more harm than good in combatting the issues they claim to want to fight against.

With such sensitive subject material, careful attention must be made to ensure that a positive message is played out. Especially when a show is targeted to a young viewership, Netflix had a responsibility to handle this narrative properly. But it failed—not just with the show, but their audience. Representations in the media can mean the world to a 12-year-old viewer who is struggling with body dysmorphia and eating disorders. Creating a series that doesn’t shine a positive light on plus-size representation and fat acceptance and, instead, does the opposite is not only distasteful but is actually harmful to viewers.

Could a series with this premise be well-made? I believe so. But Insatiable is not. The tone is inconsistent; it seesaws between being a dark comedy and an earnest, message-driven show. But the message that “you can be beautiful on the outside, but still ugly on the inside” is over-emphasized to the point of eye-rolling. And it's a totally inaccurate portrait of what it actually means to lose such a dramatic amount of weight so quickly. It never feels satirical, just superficial.

And it's especially dismaying because when the show does handle tricky topics well, they make a real impact. Glimmers of hope for what could have been surface in a scene when Patty goes bikini shopping and is found crying in the dressing room, struggling with her deeply entrenched body image issues. As Patty is comforted by her friend, Nonnie, it's possible to see in that moment what the show could have been, but wasn't.

Perhaps the one question that really remains after seeing Insatiable is: Why make a satirical show about fat acceptance when we don't even have any serious ones about it? We desperately need a positive representation of plus-size individuals. We need characters who love themselves and are confident despite their weight. We need characters who learn to love themselves while still fat. We need plus-size performers, athletes, queen bees. We need a plus-size love story. We need writers who can capture what so many do not: that being fat does not mean being unhappy or miserable. What we don’t need is Insatiable. But as long as it's what we've got, it's important to be clear about why it's so disappointing.