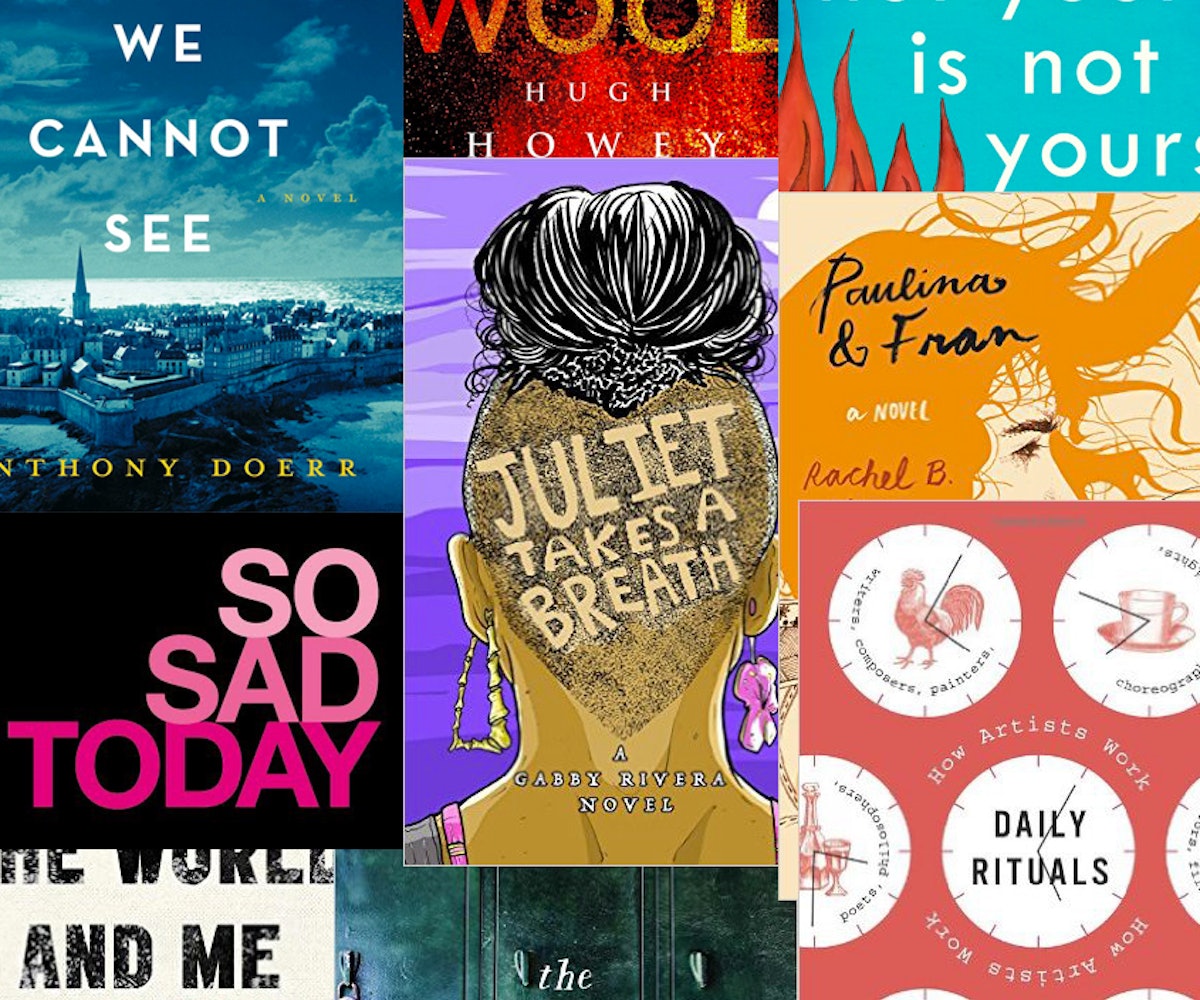 Though we're all pretty much self-proclaimed book nerds around these parts, sitting down to read a novel after spending ten or twelve hours editing and writing articles isn't always our go-to. After all, there's only so much our eyeballs can take before they start to bleed. So when we spend our free time reading by choice, we're pretty selective. And when we love a book, we love love it. Like, we want to marry it. We won't shut up about it.

So, in addition to yelling at one another wait, you haven't you read So Sad Today yet?! we thought we'd compile all of our newest obsessions here, and tell you all about them. Click through for the books currently our nightstands and forever our hearts.

Hugh Howey's post-apocalyptic novel Wool is fascinating in more ways than one. It started out as a self-published short story, but as he noticed that its sales started eclipsing all of his other works, he fed the fire, writing four more installments for hungry readers. He wound up selling upwards of 20,000 copies of "Wool" a month and not surprisingly, it got formally published. If that alone doesn't pique your interest, the plot definitely will. Set in a future with air so toxic that no humans can venture outside, a community exists in an underground silo hundreds of levels deep. The only people who go outside into the contamination are "scrubbers"—people sent to their death to clean a sensor that beams in the only glimpse of the outside world. In a highly regulated community they think is meant to protect them, everything becomes unraveled when one person breaks the greatest taboo ever and asks to go outside.

The Gilded Razor by Sam Lansky

My friends and I started a gay book club, and this was our first novel. (I finished it in four days.) It's a brutal memoir about a young, privileged addict's descent into drug abuse, madness, and the desperate lengths one will go to, to get their fix. Though Lansky's story isn't your average homosexual coming of age story, it's completely relatable. His longing for acceptance, validation, and happiness are not unique to him. They're very real desires that aren't relegated to the gay community and experience. The Gilded Razor is infuriating and cathartic, and leaves you in limbo that forces you to face yourself.

Daily Rituals is a wildly entertaining and inspiring book that takes a look at how some of the most brilliant creative minds in history went about the actual day-to-day business of doing their work. As someone who struggles with finding the time or energy for creative pursuits outside of the demands of my day job, it's fascinating to see how all these great writers, musicians, filmmakers, painters, scientists, and so on, come up with their own life hacks in order to put themselves in the best position to do creative work. The book began as a blog by the writer Mason Currey, who cataloged all the idiosyncratic habits and routines of these great artists, and the book expands on that and includes 161 people in total. Some of my favorites include Thomas Wolfe writing standing up in his kitchen and using the top of his refrigerator, and the reveal that Joseph Heller wrote Catch 22 at night after his day job as an advertising executive.

Wired to Create: Unraveling the Mysteries of the Creative Mind by Scott Barry Kaufman and Carolyn Gregoire

Based on an article that went viral in 2014, this book focuses on a series of paradoxes— like mindfulness and daydreaming, seriousness and play, and solitude and collaboration— that make an individual creative. Using Barry Kaufman’s research and Gregoire’s journalistic talent for storytelling and relaying scientific information in an accessible way, this is a perfect read for those looking to engage deeper in and increase their creativity. It not only offers a look at the complicated inner workings of “messy minds” of creative people but uses the lives of Pablo Picasso, Frida Kahlo, John Lennon, and Michael Jackson among others, as real-life examples to support the claims. It is a fascinating and a relatable read that will have any creative individual saying, "This is me!" again and again.

All the Light We Cannot See by Anthony Doerr

This novel, which won the 2015 Pulitzer Prize for Fiction, is about a blind French girl and a German orphan boy whose paths collide in occupied France during World War II. Between the stories of Marie-Laure, who flees Paris with her father to escape the occupying Nazis, and Werner, who undergoes the brutal Hitler Youth academy to, his despair, become a radio expert sent to war at only 16 years old, intertwined is a mystery involving a valuable, cursed jewel that Marie-Laure finds herself in possession of. It’s a hauntingly beautiful yet devastatingly emotional can’t-put-down read, filled with brilliantly crafted passages and prose, that that had me almost miss my subway stop daily.

Between the World and Me by Ta-Nehisi Coates

Between the World and Me will swallow you, gloriously. It's a book—or letter, technically—about racial injustice through the eyes of Ta-Nehisi Coates. He writes like a poet, but the letter itself isn't full of twists of phrase or political jargon. It's to his son, and in turn, other young people like him. For everyone whose feeds are filled with coverage of #BlackLivesMatter and the many conversations happening about power and privilege in the U.S., this book will provide you with a deeply personal lens to peek at politics through. As Coates writes in the beginning and references throughout, this is a story anchored in the body, from the loss of the body to the fear of bodies. As a white reader, Coates' words aren't for me at all—but are also everything I needed to hear. I've been slow reading this one and I'd recommend the same to you. It's so good, too quick, and so important to swallow every word.

The sixth book from Helen Oyeyemi (author of the acclaimed Boy, Snow, Bird) marks a slight departure from the author’s trademark fairy tales told through vividly realistic lenses. The collection of nine short stories is threaded together by the presence of a key, in the literal and metaphorical sense. Oyeyemi demonstrates her cleverness with the many ways that she reimagines what a key can mean, and flaunts an impressive fluidity of voice throughout the stories. She captures the mindset of people of different genders, ethnicities, creeds, and sexualities (as well as—no joke—a puppet) with the knowing detail of someone simply recollecting the many lives she has lived, rather than just a writer who has an uncanny ability to immerse herself in the characters that she has created. Add to that her descriptions, as colorful as they are refreshingly unique, and what you wind up with is a downright addictive read. Oyeyemi writes in “Is Your Blood as Red as This?” that stories “come to our aid in times of need.” For those seeking a glimpse into the intricacies of personal connection, the collection will surely serve as a refuge.

Paulina and Fran by Rachel Glaser

They say literature caters to the self-absorbed and amplifies narcissistic tendencies to the extreme. And when it takes place at a secluded art school, as it does in Rachel Glaser's debut novel, it's needless to say that inflated egos can be a bit, err, destructive. Centered around two titular young women, Paulina and Fran explores the complex boundaries of female friendship as both navigate through the all-encompassing relationships, petty drama, and blah sex that comes with your early 20s. Part bildungsroman, part cautionary tale, it's only a matter of time before this gets adapted into an HBO series. You might as well pick it up and devour it before everyone else does.

This is the kind of novel that you read in one sitting and just know that it is about to be really important. Juliet, a young Puerto Rican lesbian, comes out to her family right before leaving her home in the Bronx, New York, to travel to Portland, Oregon, to intern with a famous white feminist writer, a woman she's never met but feels a spiritual connection to. Of course, the summer is not what Juliet expects. Author Gabby Rivera deftly addresses issues of identity politics across race, gender, sexuality, and class through the eyes of Juliet, whose blossoming political awareness is inextricably tied to her most intimate experiences. It's impossible not to fall in love with Juliet as she falls in love with the world around her, all while finding strength in her own voice and sense of self.

Oh my god, this book. Following poet Melissa Broder on Twitter for me is kind of like looking into a mirror and seeing the most painful, most secret parts of my inner self peering back. The essays in here are like that but magnified. It's hilarious, cringe-worthy, and devastating—and that uncomfortable combination is where Broder shines. It's almost too real, especially for anyone who has ever struggled with depression and anxiety, or suffered from too much self-awareness, or drowned in the abyss of unrequited romantic obsession (hi), or simply experienced what it's like to be a human with a body in 2016. Though it's a collection of essays (including an extended sext conversation that had me laughing until I actually started crying, because, duh) there's a definitive narrative here that'll catch you off guard: After chapters describing various sexual and romantic entanglements, Broder reveals that she's married—to a man with chronic illness. This book paints a more complete picture of her than you can get just from following her on Twitter, and she's definitely a person worth getting to know—regardless of what her own social media presence will try to tell you.