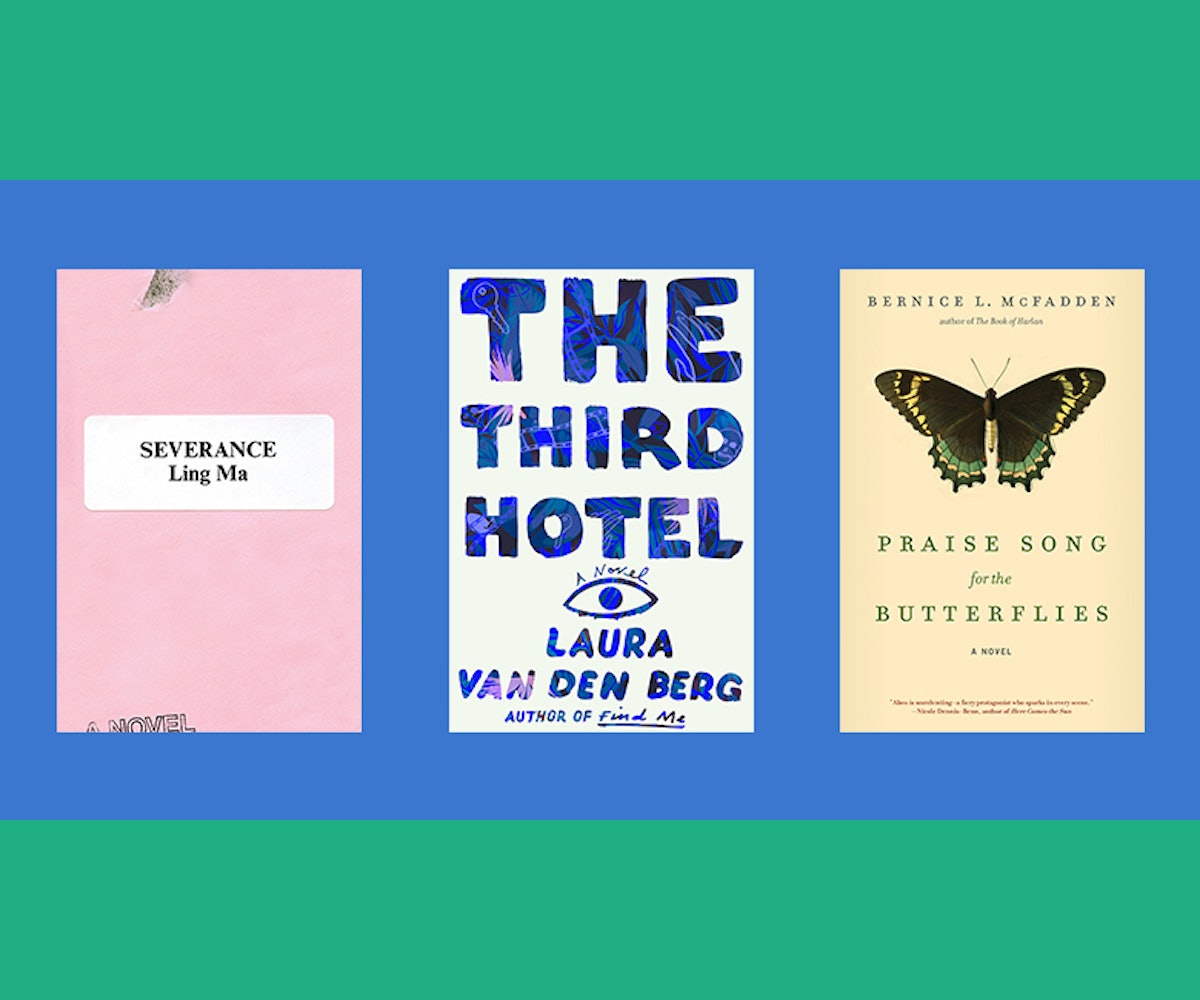 Sure, August is a doom-filled month, a time when we realize that summer is ending and we're all going to die one day. But, I don't know, I still like it! However, if doom is not your thing, maybe read a book to distract yourself? Here are some of the best books to do just that this month.

This incredible, lyrical, profoundly moving book of poems revolves around the Columbine High School massacre, and delineates the experience of living before and after such extreme tragedy. Forsythe brings a sensitivity to this topic, but that doesn't prevent her from addressing its most brutal elements; she pays attention to the smallest things, like the flowers that die in the days that follow, and those horrifying things so large as to be inescapable, like the permeability of the human body. Perennial feels like a reckoning with our collective grief that Columbine ever happened, and that it has happened again and again, so that we are now, all of us, the youngest of us, far too acquainted with what Forsythe calls "the underside of infinity."

If You Leave Me by Crystal Hana Kim (available August 7)

This compelling, gorgeous debut novel takes place in wartime Korea, and does something that far too few war stories do: It shares the perspective of a young woman, precisely the kind of person whose experience is too often silenced, whose story is never told. Haemi is but 16-year-old when she must flee her home with her widowed mother and younger brother to a refugee camp. In an effort to secure a brighter future for herself and her family, Haemi marries the wealthy cousin of her childhood love. This epic story offers a clear look at the ways in which women's autonomy is so often compromised, as they struggle to survive in a world that finds them disposable. Crystal Hana Kim's novel, with its striking portrayal of the complexities of being a woman and of being marginalized, is one of the most beautiful and moving love stories you'll read this year, set as it is against the backdrop of finding a way through a callous world, of finding a way to preserve love in a time of war.

This is Catherine Lacey's first collection of short stories, and fans of her beautiful, disarming novels—Nobody Is Ever Missing and The Answers—will be excited to know that Lacey brings a similar style—complex, enigmatic, endlessly compelling—to this shorter form. The stories within Certain American States operate on a similar frequency to one another; the characters are often searching for a sense of place, both externally and internally; their loneliness is often palpable. And yet, within these stories of loneliness and despair, grief, and searching, are threads of something more hopeful, an idea that as lost as we might feel, there is the possibility of finding ourselves, we just need to learn how to let go. So let's go.

As she showed in both her short story collection, The Isle of Youth, and her first novel, Find Me, Laura van den Berg is an expert at creating surreal worlds that are just one slight twist away from our own, but are all the more infused with mystery because of their relative closeness. In The Third Hotel, the mystery involves the fact that after Clare, a widow, arrives for a book festival in Cuba, she spots her husband, Richard, who is, of course, supposed to be dead. From there, Clare follows Richard throughout the streets of Havana, reliving her childhood, marriage, and her role in Richard's death, all building up to an unsettling peak, in which all notions of reality and fantasy become fully blurred.

Baby, You're Gonna Be Mine by Kevin Wilson (available August 7)

This marks the first short story collection by Wilson in a decade, and it's a welcome event, seeing as how Wilson is a master of the form. The stories within are reliably strange, filled with things like magic, time-traveling razors, a rock star who has to move back in with his mom, and a couple analyzing whether or not it's in their best interests to care for their uncared-for, basically feral nieces and nephews. Within each story, Wilson shows his sharp wit and expansive empathy for the weirdest corners of the human condition.

The value placed on women's beauty is incalculable, and its effects can often be devastating. This is the weighty topic with which Despentes grapples in her latest book, as she dissects the ways in which conforming to society's ideas of femininity and beauty are ultimately corrosive, dissolving everything and everyone in their path.

A River of Stars by Vanessa Hua (available August 14)

Vanessa Hua's debut is a vibrant, fascinating look into womanhood and how so many women's lives are shaped by their relationship to the powerful men within them. Scarlett Chen is living in a makeshift birthing center in Los Angeles, a place she has been sent to from her native China, where she became pregnant by a wealthy married man, who wants Scarlett to keep the baby and give birth in America because it is a boy. Scarlett struggles during her pregnancy, eventually escaping the confines of the maternity home with another young pregnant woman, and tries to find her way to San Francisco, where she hopes to carve out a life for herself. Hua infuses this story with spirit and humor, exploring the ways in which pregnancy and motherhood can be both liberating and entrapping for the women who endure them. It's a remarkable novel, one which makes clear the many ways in which women must struggle to make their lives their own.

Just because it's the end of the world, doesn't mean you don't have a job to do. Such is the fate of Candace Chen, who lives in Brooklyn, works a boring job at a big company, and doesn't much seem to notice when most of New York City succumbs to a horrific plague, Shen Fever. So what's a millennial to do? Blog, of course, and also try and escape, not just the devastation around her, but also the devastation that comes with being a pawn of the system. Ma's writing is compelling and cogent, perfectly satirizing a world that often feels beyond parody.

Eleanor, or, The Rejection of the Progress of Love by Anna Moschovakis (available August 14)

I once wrote about Anna Moschovakis' poetry book They and We Will Get into Trouble for This: "Moschovakis’ latest work deals with questions about who we are and what is the nature of love and promises and the existence of soulmates in a manner which makes me—to put it bluntly but also, I hope, softly—want to bathe in the text," and what's funny is that I still feel like I'm swimming in her words from so many months ago. So, of course, I'm incredibly excited about the release of her first novel, which is a brilliant, visceral, sensual examination of the condition of being a woman, and the inherent struggles related to identity and authority that exist for all of us. You should get excited, too. Moschovakis has outdone herself with Eleanor; it reveals all the emptiness behind our collective aspirations and makes me want to slow down and speed up all at once, empty and fill myself, perform and be true. It exists in a place of contradictions, just like we all do, and it feels like there's no better literary mirror into which we should all gaze right now.

Notes from the Fog by Ben Marcus (available August 21)

I've been haunted by Marcus' "Blueprints for St. Louis," a short story that takes place following a terrorist attack in St. Louis, as two married architects attempt to design a memorial, ever since I read it in The New Yorker last year. Marcus has a unique ability to unsettle, his words disturb, leaving a ripple effect in the mind for days after reading. I love this. And so this collection of stories ("Blueprints" is within it) is a particularly welcome one for me in summer's waning days, when I'm looking, if not to be assaulted, at least to be afflicted by what I read, pushed to think about strange, dark things, made to search for meaning.

This beautiful collection of interconnected stories explores the lives of residents of the town of Glass and offers insightful glimpses into the ways in which we all live so close together, while not often knowing one another at all. Owen's ability to convey the beauty and grace in small moments of loss and connection, heartbreak and triumph, signals a rare new literary voice, whose words will echo in your head long after you've first read them.

At last! A darkly comic, perfectly brilliant book about a mother and her large adult son! I've been waiting for this, and I'm glad it comes from the mind of Patrick deWitt, who ably skewers the absurdities of upper-class life and the romanticization of high society (and, also, Paris), while simultaneously giving the world one of the most curious characters ever created: an old cat, named Small Frank, who makes up the unlikely third in the bizarre, compelling trio of cat, mother, and large adult son. Let deWitt take you along on this dizzying, wild ride, you'll love every second of it, and then hop back to the beginning for another go.

Do not read McFadden's books if you are looking for anything other than unrelenting, provocative storytelling, the kind that doesn't flinch when addressing issues of brutality, trauma, and despair. But, do read McFadden's books, which tell stories not usually told, and with a lyrical grace that doesn't contradict the difficult subject matters, but rather enhances the experience, making it as complicated and heartrending as life itself. In her latest, McFadden tells the story of Abeo, a young West African girl, who is sold into religious servitude by her family. For 15 years, Abeo must atone for the sins of her family, until she is finally freed. This is a story of redemption and hope and the will to survive, and it is not one you will soon forget.