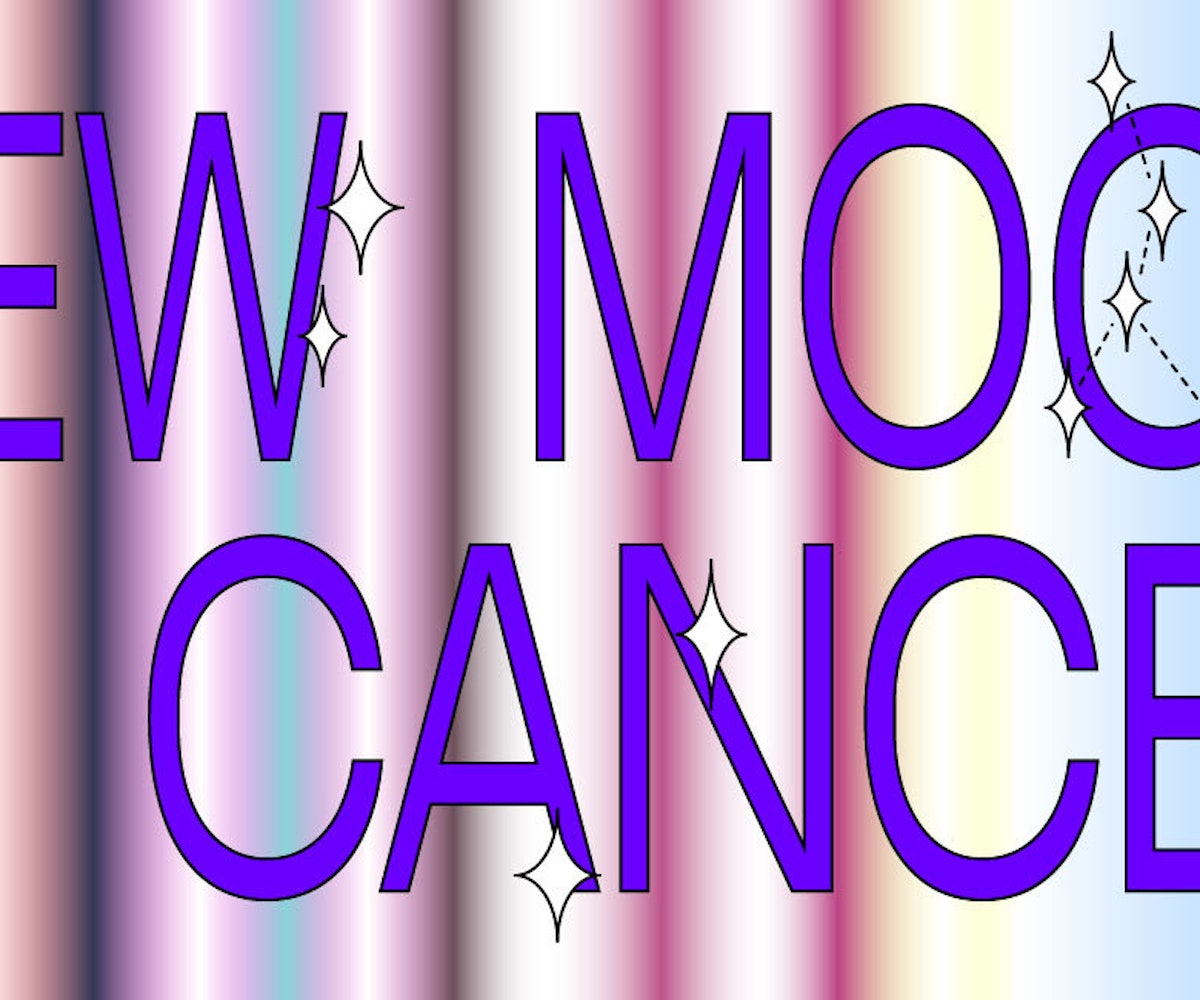 It’s a new day, it’s a new moon, and are you feeling good? A Cancer new moon is full of promise; it's emotionally astute and nurturing. It wants to know what you love about your life, what you’re willing to commit to, what accomplishments you’re proud of, and what you want to manifest. This month’s new moon in Cancer is also a partial solar eclipse and the beginning of eclipse season. It is said that eclipses occlude so that they may reveal, much like a small object casts a large shadow and, in doing so, alerts you to its presence.

This new moon will occur while the planet of love (Venus) forms a trine to the planet of discipline (Saturn) and the planet of revolution (Uranus); these planets will be in the signs of Virgo, Capricorn, and Taurus, respectively, and as such will affect anyone born under those signs deeply. Because all three signs are of the Earth element, this trine is an Earth trine, and Earth trines are an aspect interested in substance. They mean to interrogate and highlight human needs and human conditions; they want to know what sustains you in this material world and in what ways you grapple with the constraints of your human form.

When the influences of Venus, Saturn, and Uranus are brought into the mix—you can take it personally, but you'd better think globally. Yes, you will gain insights into your relationships and the roles you play in them. This is an aspect that is interested in what you do with what you’ve got, not what you say you might have done. Yes, you will be held accountable for the ways you engage and disengage. You might think setting the table is enough, but the proof in the pudding is obtained by eating it. Yes, this will have an impact on the ways in which you construct your idea of yourself. But, this astral influence is wider than you, it aims to construct a relational self, a personhood placed within the framework of global interdependence and responsibility.

Speaking of the human condition, isn’t it time to admit that this planet is the most precious thing we’ve ever wasted? To feel the wealth of our humanity, we’ve got to let our love for each other overrule our love of power. With the heavy influence of the new Cancer moon-solar eclipse, few of us will be able to deny the cosmic call asking us to walk to the water’s edge.

When you are at the shore, if you are knee-deep, each wave returning will crash against you and threaten your center of gravity. If you walk in deeper, tentatively past the broken shells, and adjust your weight so that your step is light, you’ll move without harm to the softer sand. The water is shocking at first, and then a relief, you carry yourself and then the water carries you. You are your own center of gravity and the waves roll off you softly as they flow past you.

This is the practice of surrender, of allowing yourself the fullness of your life, of trusting that you can bet on yourself because you know your potential and your limits. In this world where we either reside in the panopticon of imperial violence or we furbish it, poverty is never singular. What engenders poverty of life, suffers from poverty of the spirit; you know this because you can feel it: waves of grief for a dream of a nation never realized, a dream many of us still choose to worship despite the evidence history has provided us that it never existed.

To let the dream of our democracy go is a kind of breakup, a kind of death, and it’s terrifying. But, isn’t there another dream worth going all in on? Whatever freedom is, we’ve yet to taste it, but I’m sure it’s waiting for us on the other end of this discord, this tower crumbling into the sea. It’s tempting to succumb to the waves when the water is so much bigger than we are.

Reader, listen, the sea was made to have a turbulent surface and waves are evidence of life. If you are at the shore, keep walking in, you’re not drowning—you’re learning to swim.