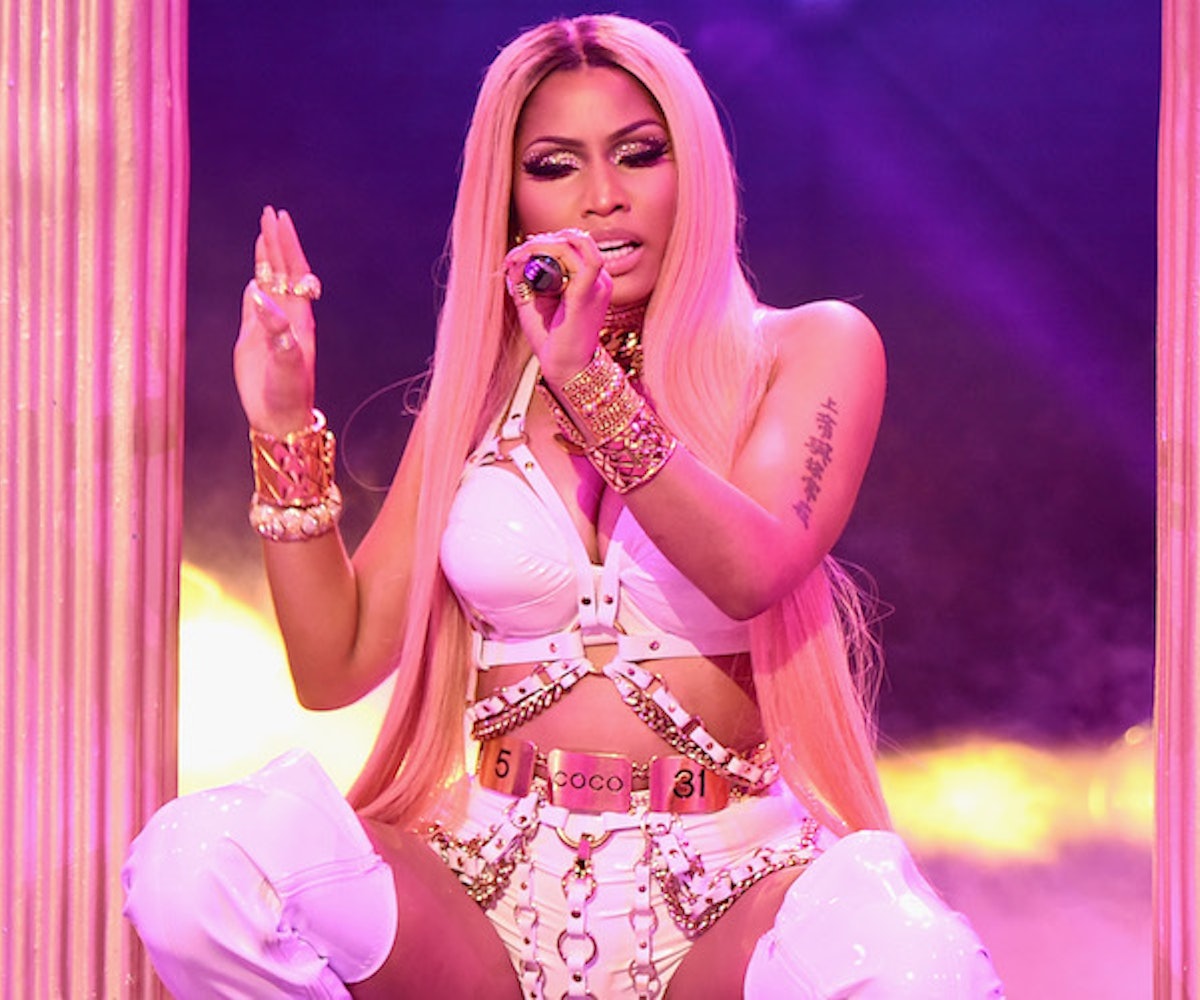 In a new Elle profile, Nicki Minaj talked about her sexy image and the fact that she would never apologize for it. However, in the process of explaining that one of the messages on her forthcoming album, Queen, is about "it being okay to keep your legs closed," Minaj also said things about female empowerment which sound an awful lot like she's policing the sexuality of other women and shaming sex work. Despite prefacing her statement with an admission that she doesn't "really know how to say [it] without being offensive," Minaj said she was surprised at "how many girls were modern-day prostitutes," and how she was sad that she may have contributed to that phenomenon in some way by "selling sex appeal."

“Whether you’re a stripper, or whether you’re an Instagram girl—these girls are so beautiful and they have so much to offer. But I started finding out that you give them a couple thousand dollars, and you can have sex with them," Minaj said. "I was like, 'Yikes.' It’s just sad that they don’t know their worth. It makes me sad as a woman."

Minaj stressed that she doesn't look down on these girls, but rather wants them to be called things like "snobby or a bitch or conceited," rather than "easy, and a ho, and a slut.”

By ignoring the fact that the problem might just be the people who are calling women names, rather than the women themselves, Minaj is participating in the kind of shaming that happens far too often when it comes to women and sex work. This type of casual chastening is indicative of lingering stigmas surrounding the way society views women's sexual agency, but it's particularly ironic coming from someone like Minaj, who preaches empowerment, individuality, and self-respect.

Sex work is like any other type of job, and sex workers are like any other professionals; some enjoy the work, and others don't but do it for the money. Regardless of their motivations, nobody should be looked down upon for working. Rhetoric like Minaj's, though, continues to stigmatize sex work and leads to fundamental misunderstandings and prejudices about the profession. Just look at legislation like FOSTA and SESTA, which conflates autonomous sex work with sex trafficking (which is done through force, fraud, or coercion), and has criminalized the peer-to-peer networks that help keep sex workers steadily employed and, most importantly, safe. Not only that, but Minaj's statement also makes the presumption that everyone has the option of disengaging from sex work and find similarly compensated employment elsewhere. That's just not always the case; sex work is a job, and for many people, it is an important means for survival.

But perhaps it's most disappointing to see someone like Minaj, who has built an entire persona upon the idea of being sex-positive, dismiss the personal circumstances of the thousands of sex workers and succumb to old-fashioned mores that have the goal of limiting female sexuality. It's up to the women who have big platforms and the ability to be whomever they wish to be to advocate for the same sort of agency for the countless others who don't have those opportunities. Hopefully, Minaj will grow to understand that soon.