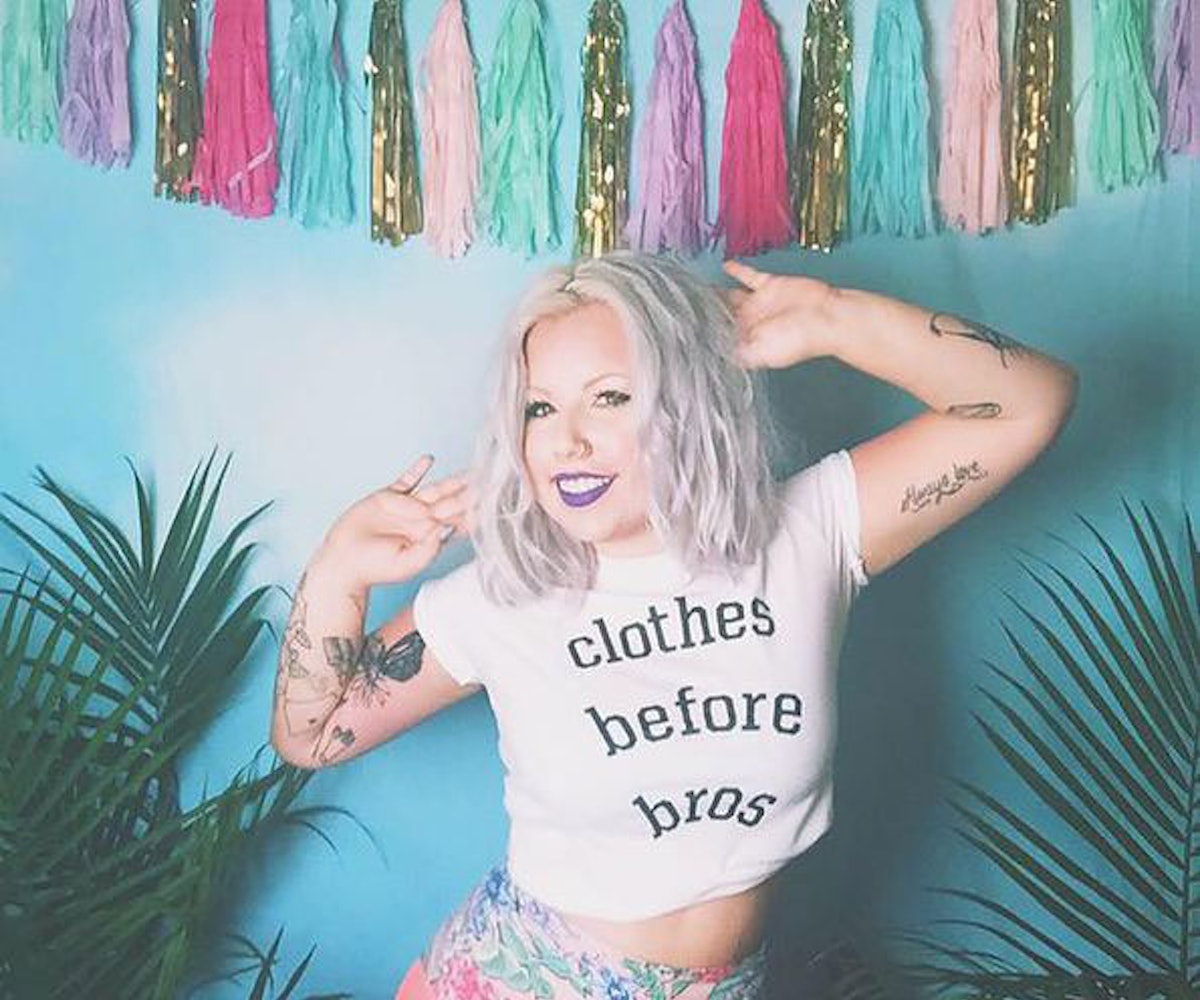 Most of us probably wouldn't rebound from a breakup by starting a new business, but that just means we're not Nicole Leth. The twenty-something is the founder of Sex + Ice Cream, a clothing brand where "Taylor Swift meets Betsey Johnson meets Tracey Emin meets Yayoi Kusama all bundled up in a Miami in the 1980’s color palette." The whole concept of channeling that energy into something creative reminds us of One Tree Hill and the moment that Brooke Davis decided to start her Clothes Over Bros line. (If you watched the show, you'll remember that the company went on to become a successful fashion empire.) Of course, that brand was fictional and Sex + Ice Cream is real, but both ideas were sparked by painful heartbreaks.

Leth's designs could be described as "breakup art," but the aesthetic that she goes for is "graphic patterns, bright colors, traditional fiber techniques mixed with modern processes, and honest storytelling of my girlhood." (We're especially obsessed with her Drake and Beyoncé designs.) Every fiber of Leth's being goes into her designs—she's literally personally attached. "All of the patterns and prints I use are scanned directly from my diary," she said in an email.

But she hasn't stopped spreading her messages on T-shirts—Leth is also an active participant in self-empowerment workshops. Success is always the best form of revenge, but living your best life? That's infinitely better. (Though she is prone to blast Beyoncé, Taylor Swift, Lady Gaga, The Wonder Years, Blink-182, Brand New, and Taking Back Sunday to get through all the feels.)

We caught up with the brain behind the brand to learn more about her creative love child, and how she handles breakups now. This spring, Sex + Ice Cream's official store will be opening at 1515 Walnut, Kansas City, Mo. Learn about the origin of Sex + Ice Cream in the interview, below!

How did you get into design?

As a young girl, I was always obsessed with fashion and clothing. I would spend hours doodling my favorite childhood heroes (Sailor Moon, Britney Spears) in my diary and drawing them in different outfits I had thought up in my head. It wasn’t until it was time for me to go to college that I really starting designing. I started in the Fibers Department at the Kansas City Art Institute without knowing anything about sewing, making garments, etc., but over my four years studying fiber art and processes I slowly started to develop a design aesthetic and skill set that helped me form the pieces behind Sex + Ice Cream!

How did you come up with the name Sex + Ice Cream?

My ex (the one that broke my 18-year-old heart and inspired 18-year-old me to start this brand) and I used to do this thing where we would eat a pint of ice cream after we had sex. I remember vividly sitting in his room ( the basement of his parent’s house), naked, and passing a pint of ice cream between the two of us, when he looked at me and said, “Nicole, sex and ice cream is our thing. It's so us. We’ll never do this with anyone else.”

Long story short, the guy in question ended up breaking my heart and sent me spiraling in to what would be my first serious cry-all-day-and-night breakup. It took me months to understand the fact that I was still whole without him and that I was a survivor.

One day, in the midst of my heartache, I woke up with this fire in me and decided I wanted to get revenge on him. I remembered someone, somewhere had once told me that cliché saying about how sometimes the best revenge is to live the life of your dreams and show the person who hurt you that they’re not one of them anymore. It was that night that 18-year-old me decided she would start a clothing line and that she would name it Sex + Ice Cream. At the time, it seemed like the ultimate FU to the guy: it was me telling him “no, sex and ice cream is MY thing and you can never take it away from me.” Since then, I’ve definitely moved on and its not about revenge anymore—but what’s important now, I think, is looking back and seeing that it was the first time I truly believed in myself and all that I could be and the first time I chose my dreams over a boy.

What are you hoping to accomplish with your brand?

For a long time my biggest goal was to open a Sex + Ice Cream store so people could come shop IRL. Last week I just signed the lease for my first spot and plan on opening my first store in Kansas City, Mo. this spring so that was a major milestone for me! To be honest, my main goal is to just reach as many people as I can with Sex + Ice Cream, and tell my stories and hear theirs, and create and sell clothing that makes you feel good. I’m also a writer and sometimes I think about Sex + Ice Cream as my visual autobiography that I’m sharing with the world as I live it. I think it's really empowering and noble to tell your story, especially as a woman, and I want to spread that message. Oh, yeah, and also biggest dream goal ever would be to sell my clothes on Nasty Gal.

If you had to pick, what is your favorite item that you've designed so far?

It was the first fabric that I ever designed—it had all these little doodles of bras all over it that I had originally drawn in my diary, each bra style symbolized a different female in my life. I screen printed yards of fabric by hand and then went and individually colored in every little bra. I ended up making all these garments out of that bra fabric and having my very first fashion show when I was 19. I still get mushy when I think about that first bra-print collection. It's just so symbolic of that time in my life.

What made you want to get involved with self-empowerment workshops?

The most important part for me was to switch up the platform in which I tell my stories. To prove that these messages can reach beyond the realms of clothing. To be face-to-face with a group of high school girls in a conference room disclosing some of the most embarrassing facts of my past relationships means reaching people on an entirely new level. Like hanging out with your girlfriends after school on a

night talking and crying and laughing about life and love and sex and whatever. There’s a type of healing that happens in those moments I think. I believe the same thing happens in the workshops. Interacting and unifying and bonding is important to me.

What makes you feel the most empowered?

Creating. Writing. Being terrifyingly honest. Putting on my hottest lingerie and dancing and lip-syncing Beyoncé to myself in the mirror.

How has your dating life changed or improved since you launched your clothing line?

I definitely still make mistakes and sometimes love a little too much and sometimes it takes me a little too long to say goodbye. But I’ve come to realize that although breakups will always hurt regardless, I will never be broken after a breakup or left with nothing. I feel so confident about that now. Creating work based around my relationships has made me hyperaware of my tendencies and who I am. I am more than my relationships and they will never define me.

Best advice for dealing with a breakup/ghoster/fuccboi?

My token advice for anything bad that happens in life, but especially breakups, will always be this:

For every bad thing that happens to you in life there is also a good that goes along with it. But you have to find it, and sometimes it’s the hardest thing in the world to find good in something bad that has happened to you. But if you can find even the littlest bit of good that came from that relationship or person or tragedy or whatever, you are taking the power away from the bad to be

bad and you are giving it back to yourself. This is empowering yourself, and this is how you rise above any fuccboi or breakup.

I’ve literally had to write lists out in the past after dealing with a shitty guy that have bullet points and I make myself fill five bullet points of good things that came from that shitty situation no matter how dumb they might be (i.e. designed a new print after we broke up, bought myself Beyoncé tickets with the money I almost spent on his birthday gift, started doing yoga again, met the love of my life, etc.). It always helps me.

How do you usually terminate your relationships? (What is your technique?)

Depending on how long you’ve been with the person—I’d say less than a month or two texting is fine, anything more you should call or meet up. My approach is to be as real and honest with the person as possible and try not to lead them on in anyway. Less “Yo sry I found some1 else,” and more “Hey! So I’ve had so much fun with you over the past however many months, but I think I need to be on my own right now. I hope you understand it's nothing to do with you, it’s just what I want for myself!” Unless they were shitty then it's more like: “Yo, you hurt me, and you treated me like shit, and that’s not okay with me so we’re done. K, bye.”

Does the ex that inspired the line know about your brand now?

He definitely knows about my brand. Does he know it's about him? I’m not sure. I haven’t talked to him in years. I don’t even know where he is now.